Prevalence and Clinical Significance of Symptoms at Ultra High Risk for Psychosis in Children and Adolescents with Obsessive–Compulsive Disorder: Is There an Association with Global, Role, and Social Functioning?

Early Senescence and Leukocyte Telomere Shortening in SCHIZOPHRENIA: A Role for Cytomegalovirus Infection?

Schizophrenia is a severe, chronic mental disorder characterized by delusions and hallucinations. Several evidences support the link of schizophrenia with accelerated telomeres shortening and accelerated aging. Thus, schizophrenia patients show higher mortality compared to age-matched healthy donors. The etiology of schizophrenia is multifactorial, involving genetic and environmental factors. Telomere erosion has been shown to be accelerated by different factors including environmental factors such as cigarette smoking and chronic alcohol consumption or by psychosocial stress such as childhood maltreatment. In humans, telomere studies have mainly relied on measurements of leukocyte telomere length and it is generally accepted that individuals with short leukocyte telomere length are considered biologically older than those with longer ones. A dysregulation of both innate and adaptive immune systems has been described in schizophrenia patients and other mental diseases supporting the contribution of the immune system to disease symptoms. Thus, it has been suggested that abnormal immune activation with high pro-inflammatory cytokine production in response to still undefined environmental agents such as herpesviruses infections can be involved in the pathogenesis and pathophysiology of schizophrenia. It has been proposed that chronic inflammation and oxidative stress are involved in the course of schizophrenia illness, early onset of cardiovascular disease, accelerated aging, and premature mortality in schizophrenia. Prenatal or neonatal exposures to neurotropic pathogens such as Cytomegalovirus or Toxoplasma gondii have been proposed as environmental risk factors for schizophrenia in individuals with a risk genetic background. Thus, pro-inflammatory cytokines and microglia activation, together with genetic vulnerability, are considered etiological factors for schizophrenia, and support that inflammation status is involved in the course of illness in schizophrenia. View Full-Text
Keywords: schizophrenia; leukocyte telomere length; cytomegalovirus; inflammation; early senescence schizophrenia; leukocyte telomere length; cytomegalovirus; inflammation; early senescence
►▼ Show Figures 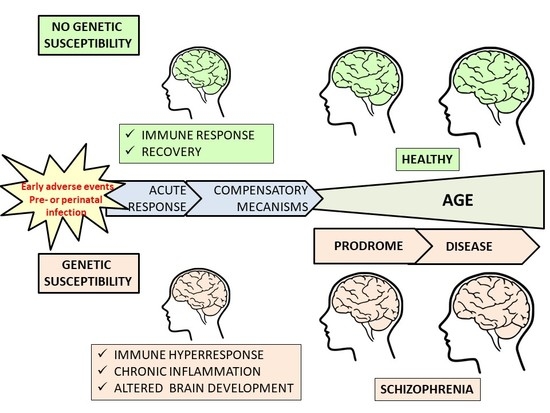