Attention Deficit/Hyperactivity Disorder (ADHD) is a neurodevelopmental disorder affecting 3–7% of school-age children [1]. The main symptoms are age-inappropriate levels of inattention, impulsivity and hyperactivity. It is associated with school difficulties and social impairment [2]. Impairments of cognitive functions such as alertness, vigilance, effort, planning, organization and working memory have been documented [3,4,5]. Pathophysiology involves genetics [6,7] and neurobiological factors [8,9,10,11,12].
Neuroimaging studies have shown alterations in the neuronal connectivity [8,13,14] and brain electrical activity [15,16] in children with ADHD compared to typically developing children (TDC). Event-related potentials (ERP) have been used to approach the neural mechanisms underlying attention and inhibition deficits in children with ADHD. ERP components from visual tasks reflect both visual and condition-specific attentional processing. A variety of ERP features related to executive functions were found to be modified in children with ADHD compared to TDC, including N1 and P3 in selective attention, and N3 and P3 in response inhibition [17,18]. In particular, Go/Nogo or continuous performance task studies showed reduced frontal N1, frontal N2 and central P3 in children with ADHD [19,20,21,22]. More recently, developments of electroencephalographic (EEG) dynamics tools [23,24] have permitted to analyze specific event-related synchronization (ERS, increased power) or desynchronization (ERD, decreased power) in different frequency bands in the event-related spectral perturbation (ERSP) and inter-trial coherence (ITC) linked to sensory stimulation or behavioral events [25]. These frequency bands are classically decomposed as delta (1–4 Hz), theta (4–7 Hz), alpha (8–15 Hz), beta (15–30 Hz) and gamma (30 Hz and more). Several studies investigated EEG rhythm in children with ADHD compared to TDC during event-related task [26,27,28,29,30,31,32,33,34,35,36,37,38]. In particular, studies showed atypical delta activity in ADHD during continuous performance task (CPT) [27,30,37]. Yodanova et al. (2006) showed that late theta oscillation (200–450 ms) in response to irrelevant stimuli of auditory task was larger in children with ADHD than TDC [28]. In a study that investigated EEG familiarity in sibling pairs with ADHD, Loo et al. (2008) showed that theta and alpha oscillations were correlated with CPT response variability and omission errors [31]. Moreover, Nazari et al. (2011) showed that contrary to TDC, CPT induced alpha power increased in children with ADHD compared to eyes-open resting state [34]. Using a Sternberg memory task, Lenartowicz et al. (2014) showed a lower ERD during encoding phase and an increased alpha power during maintenance period in children with ADHD compared to TDC [35]. In previous studies about memory, Lenz et al. (2008, 2010) revealed an increased gamma-band response in children with ADHD than TDC during stimulus encoding of a memory task [32,33]. In the present study, we investigate EEG dynamics linked to the ERP triggered by sensory and behavioral events in a visual Go/Nogo paradigm in children with ADHD in order to dissociate oscillatory features of attentional orienting and motor/inhibition processing.

Twenty six children aged 8 to 12 years were enrolled in the study (14 with ADHD and 12 TDC). Children with ADHD were recruited consecutively from the pediatric neurology outpatient clinic of Hôpital Universitaire des Enfants Reine Fabiola (HUDERF) in Brussels, Belgium. Diagnosis of ADHD was made by multidisciplinary team including pediatric neurologists and neuropsychologists according to DSM IV-TR. If the child was treated by medication (methylphenidate), this was stopped 48 h before the experimental process. TDC were recruited from primary mainstream schools, and were screened by neuropsychologists of the team. In addition to the neuropsychological assessment, each child performed the Wechsler Intelligence Scale for Children (WISC-IV: Wechsler, 2005), and all parents were asked to fill in the Child Behavior Checklist (CBCL; [39]). Exclusion criteria were a seizure disorder, mental retardation (IQ below 80), psychiatric comorbidity, sensory deficits and pharmacologic treatment (other than methylphenidate) that could interfere with behavioral performances or with electrophysiological results. Five children were rejected due to mental retardation or psychiatric comorbidity. One child asked to stop the experiment because it was too long for him. Data from six children were rejected during data treatment due to too many artifacts. Thus, 14 children (7 in each group) were analyzed (ADHD: 2 boys and 5 girls, mean = 9.43 years; SD = 1.72/TDC: 4 boys and 3 girls, mean = 8.71 years, SD = 1.49). No difference between groups was found in age (p = 0.48, Mann-Whitney U Test), in gender ratio (Chi-square (1) = 1.17, p = 0.28), and comorbidities (Table 1). The experimental design was setup in agreement to CONSORT directives and the Helsinki declaration [40]. Informed consent was obtained from all participants and their parents. Experimental setup was approved by the Ethics Committee of CHU Brugmann and HUDERF (Brussels, Belgium).

The subject sat comfortably at 120 cm in front of a 17-in computer screen, and performed a visual-cued Go/Nogo task adapted from [41]. The Cue, Go and Nogo stimuli were displayed in black on a white background. Luminance and contrast of screen was the same during session and between sessions. Each cue (black square) was briefly shown (150 ms) and followed by a Go (“×”), or Nogo (“+”) stimulus during 150 ms after a 1–2 s random period of white screen. The task was divided in two blocks including 60 trials each, with equal probability of Go and Nogo stimuli. The participant had to press as quickly as possible a button after the Go stimulus, and retain/inhibit the pushing after the Nogo stimulus. The next Cue stimulus reappeared after 2.5 s after the Go/Nogo stimulus was displayed (Figure 1).

Regarding behavioral measures, dependent variables were omissions (no responses to Go trials), false alarms (“FA Cue”: pushing when the Cue is shown, and “FA Nogo”: pushing when “+” is shown), reaction time (RT) and the RT variability. The RT variability, estimating the intra-individual variability, was calculated with the coefficient of variation (CV) of reaction times [42], a normalized measure of dispersion, defined as the ratio of the standard deviation (σ) to the mean (μ): CV = σ/µ. The CV is useful because the standard deviation of data must be understood in the context of the mean of the data [43]. In order to highlight behavioral difference between groups we have cross-correlated to two time series corresponding to latencies of the Go and Button Press, in the ADHD and TDC groups respectively.

Brain electrical activity was recorded with an ASA EEG/ERP system (ANT company, Enschede, The Netherlands) from 14 channels (Fz, F3, F4, Cz, C3, C4, Pz, P3, P4, Oz, O3, O4 and M1-M2 for the left and right mastoids), embedded in a waveguard cap (10–20 system), referred to the mean of the two mastoids and connected to the ground electrode. EEG activity was recorded at a sampling rate of 512 Hz (analog filtering: 0.1–100 Hz; amplification × 20). Eye movements were monitored using two bipolar recordings: one between each outer eye canthus, and one between a supra orbital electrode and an electrode just below the lower lid on the right side. Impedances were kept below 10 kΩ and checked before each recording.

Off-line data treatment and analysis were performed by means of EEGLAB software (SCCN, San Diego, USA) [23,44] and in-house MATLAB-based tools [45]. Band pass filter 0.1 to 125 Hz and notch filter around 50 Hz (47.5–52.5 Hz) and 100 Hz (97.5–102.5 Hz) were applied to attenuate electrical artifacts. Portions of data and defective electrodes (max. 6%) were removed by careful visual inspection. Ocular (blinks and saccades) and any other remaining artifacts (muscular, cardiac) were isolated and rejected by independent component analysis (ICA) on continuous data [46,47,48]. Data were cut in epochs extracted from −0.5 to 1 s of each stimuli onset. Only successful trials (button pressed after a GO and not pressed after a Nogo) were considered, rejecting all others. In all cases, epochs were rejected according to ±100 µV threshold criteria, and we made a visual review to confirm epoch rejection. After rejection, a total of 2217 epochs remained (ADHD: 47.9 ± 18.6 per subject and condition; TDC: 57.7 ± 20.2 per subject and condition).

A EEGLab design study was used for each stimulus to average data from all subjects. A time window of 500 ms before stimulus onset was used as baseline. Evoked potential (ERP), spectral perturbation (ERSP) and inter-trial coherence (ITC), time-locked on each stimulus (Cue, Go and Nogo), were calculated by averaging baseline corrected epochs extracted from −0.5 to 1 s of the stimuli onset. ERSP and ITC are both time–frequency measurements calculated by means of fast Fourrier transform (FFT), but the information they provide is different: ERSP measures variations in power spectrum at specific frequency ranges of ongoing rhythms at specific periods of time and frequency range [49,50]. A color code at each image pixel indicated the reached power (in dB) at a given frequency and latency relative to the stimulation onset. ERD (event-related desynchronization) indicates a power spectrum reduction, while ERS (event-related synchronization) indicates a power spectrum increase. ITC measures the synchronization across trials of ongoing oscillations (~phase locked) with respect to an event, independently of amplitude variation [51]. The ITC measure took values between 0 and 1. A value of 0 represented the absence of synchronization between EEG data and the time locking events; a value of 1 indicated their perfect synchronization. Statistical difference between ADHD and TDC groups were performed by EEGLab non-parametric permutation test at each trial latency of the average ERPs and every time-frequency point for ERSP and ITC [23]. Multiples comparisons are corrected by the False Discovery Rate (FDR) method [52]. Statistical differences of ERP, ERSP and ITC between groups were described by the electrodes of relevance, interval of time and amplitude (Table 2). For clarity, we subdivided the presentation of results by considering conditions and three regions: anterior (including Pz, P3, P4, Oz, O3, O4), central (Cz, C3, C4), and posterior (Fz, F3, F4).

Group analysis over the posterior regions (Figure 3) showed that Cue stimulus evoked a lower P1-N2 potentials (p < 0.01) in children with ADHD compared to TDC. In the frequency domain, we observed a smaller ITC of theta (4.5–7 Hz) oscillation, that reached significant threshold (p < 0.05) between 260 and 420 ms after the Cue stimulus. At the same latency, high beta-gamma frequency showed a lower power and higher ITC in ADHD compared to TDC. Over central regions, we showed no significant difference between group in ERP, as well as in frequency domain, in response to the Cue stimulus. Concerning frontal regions, group analysis showed a lower N1 and higher P2 amplitude in ADHD than TDC (p < 0.05). These were coupled by a lower alpha power (p < 0.05) and ITC (p < 0.05) in children with ADHD compared to TDC.

In conclusion, this study showed that ERP studies must be analyzed during EEG dynamics, in order to better approach the mechanisms that underlie neural processing in ADHD. In relation to this, we found, in children with ADHD compared to TDC, that in Cue, Go and Nogo conditions: (1) reduction of occipito-parietal P1-N2 components was coupled with a decrease of theta ITC (extended to a decrease of alpha ITC in Go and Nogo); (2) reduction of frontal N1-P2 components was coupled with a decrease of alpha power and ITC; (3) an overall decrease of high-beta/low-gamma power occured 300 ms after stimulus (this was coupled with an increase of gamma ITC in the Nogo condition); and (4) in the Go condition, the decrease of P3 was preceded by a high alpha power and a small alpha ITC. This points to impaired ability in conserving the phase of brain oscillations associated with stimulus processing in a Go/Nogo paradigm in various frequency bands. This physiological finding might serve as a target for therapeutic intervention, or be used as monitoring of their effects. This study also paves the way for further investigations comprising the high EEG density and source localization approach.

We warmly thank the children and their parents who kindly took part in this research, as well as the schools and the teachers who agreed to collaborate in this study. This study was supported by a grant from the Belgian Kids’ Fund, the Secretaria Nacional de Ciencia y Tecnologia (Senescyt, Ecuador), and the NeuroAtt BIOWIN project supported Walloon Country. The scientific responsibility rests with its author(s). None of the authors have potential conflicts of interest to be disclosed. 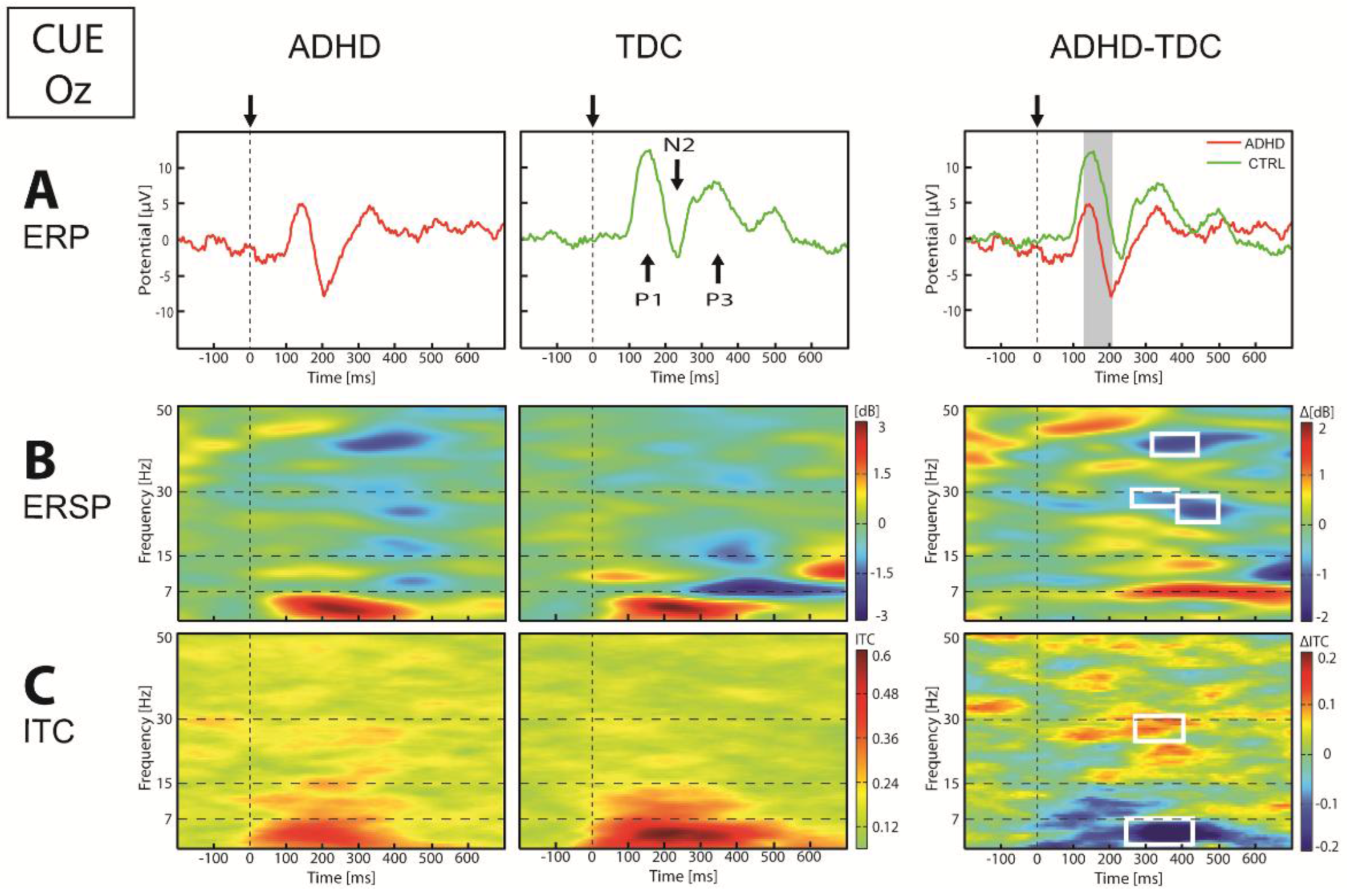