The Effect of Cannabis-Based Medicine on Neuropathic Pain and Spasticity in Patients with Multiple Sclerosis and Spinal Cord Injury: Study Protocol of a National Multicenter Double-Blinded, Placebo-Controlled Trial

Understanding the Modulatory Effects of Cannabidiol on Alzheimer’s Disease

Alzheimer’s disease (AD), the most common neurodegenerative disease, is characterized by progressive cognitive impairment. The deposition of amyloid beta (Aβ) and hyperphosphorylated tau is considered the hallmark of AD pathology. Many therapeutic approaches such as Food and Drug Administration-approved cholinesterase inhibitors and N–methyl–D–aspartate receptor antagonists have been used to intervene in AD pathology. However, current therapies only provide limited symptomatic relief and are ineffective in preventing AD progression. Cannabidiol (CBD), a phytocannabinoid devoid of psychoactive responses, provides neuroprotective effects through both cannabinoid and noncannabinoid receptors. Recent studies using an AD mouse model have suggested that CBD can reverse cognitive deficits along with Aβ-induced neuroinflammatory, oxidative responses, and neuronal death. Furthermore, CBD can reduce the accumulation of Aβ and hyperphosphorylation of tau, suggesting the possibility of delaying AD progression. Particularly, the noncannabinoid receptor, peroxisome proliferator-activated receptor gamma, has been suggested to be involved in multiple functions of CBD. Therefore, understanding the underlying mechanisms of CBD is necessary for intervening in AD pathology in depth and for the translation of preclinical studies into clinical settings. In this review, we summarize recent studies on the effect of CBD in AD and suggest problems to be overcome for the therapeutic use of CBD. View Full-Text
Keywords: Alzheimer’s disease; cannabidiol; cannabinoid receptor; endocannabinoid system; amyloid β; phosphorylated tau Alzheimer’s disease; cannabidiol; cannabinoid receptor; endocannabinoid system; amyloid β; phosphorylated tau
►▼ Show Figures 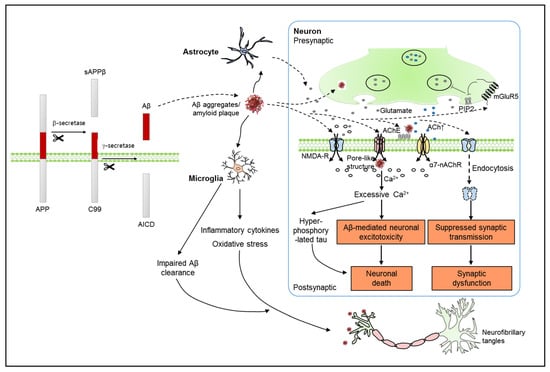