Intervention Effect of Non-Invasive Brain Stimulation on Cognitive Functions among People with Traumatic Brain Injury: A Systematic Review and Meta-Analysis

Impairments of action semantics (a cognitive domain that critically engages motor brain networks) are pervasive in early Parkinson’s disease (PD). However, no study has examined whether action semantic skills in persons with this disease can be influenced by non-invasive neuromodulation. Here, we recruited 22 PD patients and performed a five-day randomized, blinded, sham-controlled study to assess whether anodal transcranial direct current stimulation (atDCS) over the primary motor cortex, combined with cognitive training, can boost action–concept processing. On day 1, participants completed a picture–word association (PWA) task involving action-verb and object-noun conditions. They were then randomly assigned to either an atDCS (n = 11, 2 mA for 20 m) or a sham tDCS (n = 11, 2 mA for 30 s) group and performed an online PWA practice over three days. On day 5, they repeated the initial protocol. Relative to sham tDCS, the atDCS group exhibited faster reaction times for action (as opposed to object) concepts in the post-stimulation test. This result was exclusive to the atDCS group and held irrespective of the subjects’ cognitive, executive, and motor skills, further attesting to its specificity. Our findings suggest that action-concept deficits in PD are distinctively grounded in motor networks and might be countered by direct neuromodulation of such circuits. Moreover, they provide new evidence for neurosemantic models and inform a thriving agenda in the embodied cognition framework. View Full-Text
Keywords: Parkinson’s disease; action-verb processing; motor circuits; transcranial direct current stimulation; embodied cognition Parkinson’s disease; action-verb processing; motor circuits; transcranial direct current stimulation; embodied cognition
►▼ Show Figures 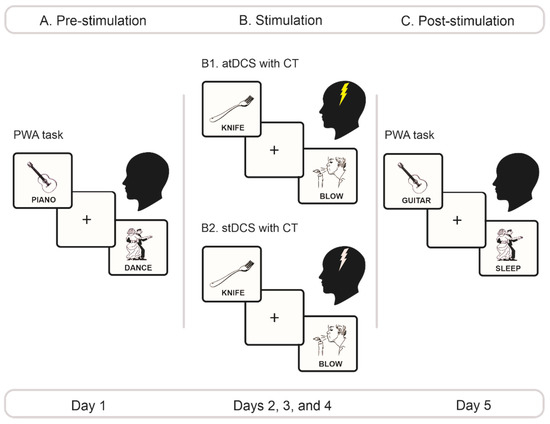