The Role of BDNF on Aging-Modulation Markers

Glial cell line-derived neurotrophic factor (GDNF) was initially described as important for dopaminergic neuronal survival and is involved in many other essential functions in the central nervous system. Characterization of GDNF phenotype in mammals is well described; however, studies in non-mammalian vertebrate models are scarce. Here, we characterized the anatomical distribution of gdnf-expressing cells in adult zebrafish brain by means of combined in situ hybridization (ISH) and immunohistochemistry. Our results revealed that gdnf was widely dispersed in the brain. gdnf transcripts were co-localized with radial glial cells along the ventricular area of the telencephalon and in the hypothalamus. Interestingly, Sox2 positive cells expressed gdnf in the neuronal layer but not in the ventricular zone of the telencephalon. A subset of GABAergic precursor cells labeled with dlx6a-1.4kbdlx5a/6a: green fluorescence protein (GFP) in the pallium, parvocellular preoptic nucleus, and the anterior and dorsal zones of the periventricular hypothalamus also showed expression with gdnf mRNA. In addition, gdnf signals were detected in subsets of dopaminergic neurons, including those in the ventral diencephalon, similar to what is seen in mammalian brain. Our work extends our knowledge of gdnf action sites and suggests a potential role for gdnf in adult brain neurogenesis and regeneration. View Full-Text
Keywords: gdnf; radial glial cells; Sox2; neuronal progenitor cells; dlx; GABAergic neurons; dopaminergic neurons gdnf; radial glial cells; Sox2; neuronal progenitor cells; dlx; GABAergic neurons; dopaminergic neurons
►▼ Show Figures 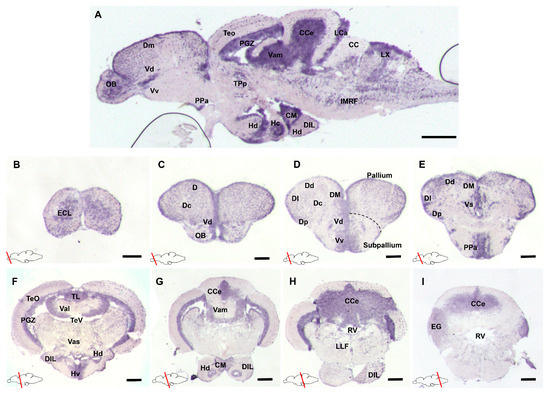