Inter-Day Reliability and Changes of Surface Electromyography on Two Postural Muscles Throughout 12 Weeks of Hippotherapy on Patients with Cerebral Palsy: A Pilot Study

Chronic neuropathies are a common cause of neurological disability worldwide and it is estimated that about one-fifth of these patients do not receive an appropriate etiologic diagnosis thus demonstrating the clinical challenge in dealing with this type of patients [1].
Ten percent of patients with polyneuropathy of unknown cause have a monoclonal gammopathy, mostly represented by IgM paraglobulinemia [2]. In patients with IgM monoclonal gammopathy associated neuropathy, serum anti-myelin associated glycoprotein (anti-MAG) antibodies are frequently detected at high titers [3].
Clinical picture of anti-MAG associated neuropathy includes distal dysesthesias, ataxia and tremor, with mild motor symptoms developing only in later stages [4]. Nerve conduction studies (NCS) are crucial in diagnosis and frequently show a symmetrical demyelinating neuropathy with distal prominence (distal acquired demyelinating symmetric neuropathy, DADS). However, one third of patients may present with sensori-motor distal and proximal demyelinating signs, which fulfill diagnostic criteria for chronic inflammatory demyelinating polyneuropathy (CIDP). A minority of cases may also show asymmetric and multifocal neuropathy impairments [5]. Anti-MAG neuropathy may also start with subclinical neuropathic impairment which cannot be identified by standard NCS. In atypical presentations of anti-MAG neuropathy, somatosensory evoked potentials (SSEPs) may provide some clinical value because they are able to detect minor proximal neuronal damages which are hardly evidenced by NCS. Indeed, although there are several reports of SSEPs studies in anti-MAG neuropathy patients, the main finding reported is a conduction impairment of the cauda, while a spinal dorsal column damage was never testified [6].
In the present manuscript we report an atypical presentation of anti-MAG neuropathy where initial symptoms and negative NCS studies led to perform SSEPs demonstrating a dorsal column impairment before the development of polyneuropathy.

We report the first case of a symptomatic patient with anti-MAG antibodies presenting with a dorsal column impairment, as documented by SSEP studies, before the onset of peripheral neuropathy. We speculate that this clinical presentation and neurophysiological findings may be expression of a pathogenetic role played by anti-MAG antibodies in demyelination of both peripheral and central nervous system. Current literature in animal models and humans does not seem to deny this thesis, even if further studies, which combine immunological research and clinical observation, are necessary to validate our hypothesis. We encourage the use of SSEPs in classifying and monitoring the evolution of anti-MAG sensory neuropathy because of their ability to simultaneously explore central and peripheral sensitive nerve conduction.

The authors would really thank Rita Fini and Emma Fabrizio for their support in recording somatosensory evoked potentials. 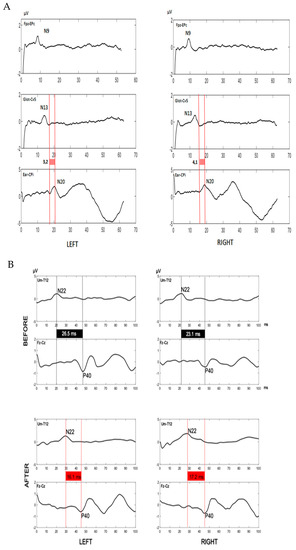