Social isolation (SI) stress has been recognized as a major risk factor of morbidity in humans and animals, exerting damaging effects at the physical and mental health levels. Posttraumatic stress disorder (PTSD), on the other hand, occurs as a result of experiencing serious, life-threatening, traumatic events and involves involuntary re-experiencing trauma (intrusion), avoidance symptoms, and distortions of cognition and emotional arousal. The literature shows that PTSD is affected by genetic predisposition and triggers a large neurocircuitry involving the amygdala, insula, hippocampus, anterior cingulate- and prefrontal-cortex, and affects the function of the neuroendocrine and immune systems. Social isolation seems to influence the predisposition, onset and outcome of PTSD in humans, whereas it constitutes a valid model of the disorder in animals. According to the PRISMA (preferred reporting items for systematic reviews and meta-analyses) protocol, we systematically reviewed all original studies involving the neurobiological trajectories between SI and PTSD published till July 2019 (database: PubMed/Medline). Out of 274 studies, 10 met the inclusion criteria. We present the results of the retrieved studies in terms of hypothalamic-pituitary-adrenal (HPA)-axis and endocannabinoid system function, immune reactions, neuroplasticity, novel pharmacological targets, and shortening of telomere length, which confirm a synergistic effect on a neurobiological level between the two entities. View Full-Text
Keywords: PTSD; social isolation; neuroendocrine/neuroimmune reaction; neuroplasticity; pharmacological targets; telomere length PTSD; social isolation; neuroendocrine/neuroimmune reaction; neuroplasticity; pharmacological targets; telomere length
►▼ Show Figures 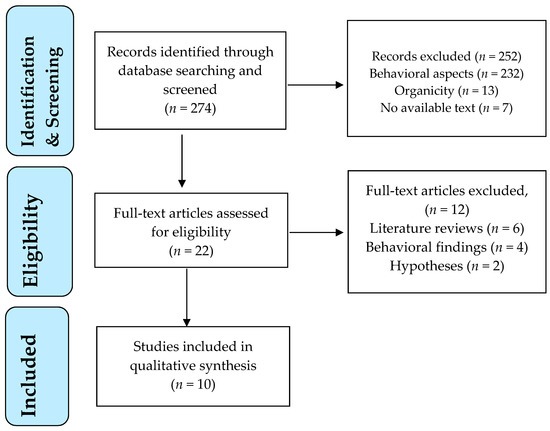