Appropriately handling and switching exploration of novel knowledge and exploitation of existing knowledge is a fundamental element of genuine innovation in society. Moreover, a mounting number of studies have suggested that such “ambidexterity” is associated not only with organizational performance but also with the human brain. Among these reports, however, there have not been any definitive MRI-based parameters that objectively and easily evaluate such ambidexterity. Therefore, an MRI-based index derived from gray matter volume, called the gray-matter brain healthcare quotient (GM-BHQ), was used to measure the association between ambidexterity and the entire human brain. For this purpose, 200 healthy adults were recruited as subjects to undergo structural T1-weighted imaging and to answer multiple psychological questionnaires. Ambidexterity was evaluated using two scales: the Curiosity and Exploration Inventory II and the Short Grit Scale, as exploration–exploitation indicators of curiosity and grit, respectively. Additionally, to enrich the understanding of these associations, three additional positive thinking scales were used—the General Self-Efficacy Scale, the Rosenberg Self-Esteem Scale, and the Life Orientation Test—to evaluate self-efficacy, self-esteem, and optimism, respectively. The authors discovered the GM-BHQ was weakly associated with curiosity, grit, and self-efficacy individually after controlling for age and sex. Furthermore, the GM-BHQ was directly associated with curiosity but indirectly associated with grit in the path model. However, no significant association was found between the GM-BHQ and the other outcome indicators (i.e., self-esteem and optimism). These results suggest that brain health is weakly associated with ambidexterity evaluated using psychological tests. View Full-Text
Keywords: gray-matter brain healthcare quotient; neuroimaging data; MRI; ambidexterity; exploration; exploitation; curiosity; grit; self-efficacy; gray matter gray-matter brain healthcare quotient; neuroimaging data; MRI; ambidexterity; exploration; exploitation; curiosity; grit; self-efficacy; gray matter
►▼ Show Figures 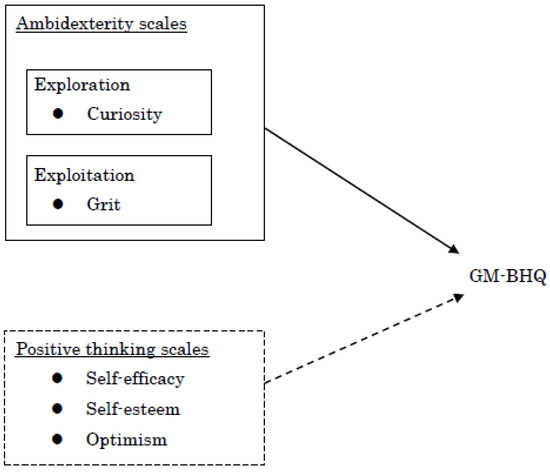