Motor deficiencies constitute a significant problem affecting millions of people worldwide. Such people suffer from a debility in daily functioning, which may lead to decreased and incoherence in daily routines and deteriorate their quality of life (QoL). Thus, there is an essential need for assistive systems to help those people achieve their daily actions and enhance their overall QoL. This study proposes a novel brain–computer interface (BCI) system for assisting people with limb motor disabilities in performing their daily life activities by using their brain signals to control assistive devices. The extraction of useful features is vital for an efficient BCI system. Therefore, the proposed system consists of a hybrid feature set that feeds into three machine-learning (ML) classifiers to classify motor Imagery (MI) tasks. This hybrid feature selection (FS) system is practical, real-time, and an efficient BCI with low computation cost. We investigate different combinations of channels to select the combination that has the highest impact on performance. The results indicate that the highest achieved accuracies using a support vector machine (SVM) classifier are 93.46% and 86.0% for the BCI competition III–IVa dataset and the autocalibration and recurrent adaptation dataset, respectively. These datasets are used to test the performance of the proposed BCI. Also, we verify the effectiveness of the proposed BCI by comparing its performance with recent studies. We show that the proposed system is accurate and efficient. Future work can apply the proposed system to individuals with limb motor disabilities to assist them and test their capability to improve their QoL. Moreover, the forthcoming work can examine the system’s performance in controlling assistive devices such as wheelchairs or artificial limbs. View Full-Text
Keywords: brain–computer interface (BCI); motor Imagery (MI); electroencephalography (EEG); wavelet packet decomposition (WPD); feature selection (FS) brain–computer interface (BCI); motor Imagery (MI); electroencephalography (EEG); wavelet packet decomposition (WPD); feature selection (FS)
►▼ Show Figures 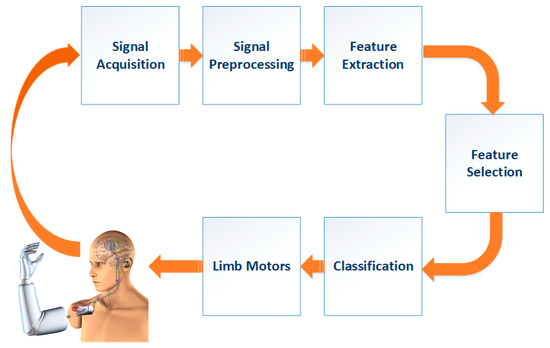 
Attallah, Omneya; Abougharbia, Jaidaa; Tamazin, Mohamed; Nasser, Abdelmonem A. 2020. "A BCI System Based on Motor Imagery for Assisting People with Motor Deficiencies in the Limbs." Brain Sci. 10, no. 11: 864.