This paper analyses the role of myoelectric games in the rehabilitation of paraplegic patients. The University of Valladolid neuromuscular training system, UVa-NTS platform, which allows the myoelectric command of computer applications, has been introduced in rehabilitation sessions of a group of paraplegic patients. The experiments took place both at the University of Valladolid and at the National Hospital for Paraplegics of Toledo in Spain. A homogeneous population of five patients with a C7 spinal cord injury was compared with a group of control subjects. The myoelectric control was performed with the flexor carpi radialis and the extensor carpi radialis muscles. The myoelectric routines were timed and the game scores measured. Notwithstanding the reduced mobility of the patients, they achieved fast adaptation and better timings than the control subjects in the first experiment (p < 0.001), although this difference was reduced in further experiments. Both patients and control subjects played satisfactorily with the Myo-Pong game. However, the improvement in the scores was better for the control subjects between sessions (p = 0.009) when compared with the patients (p = 0.978). The results show that patients and control subjects were able to perform and reached similar scores. However, patients’ improvement in further rehabilitation sessions was lesser than when compared with the control subjects. View Full-Text
Keywords: spinal cord injury; rehabilitation; electromyography; myoelectric control; real-time; biofeedback; serious games spinal cord injury; rehabilitation; electromyography; myoelectric control; real-time; biofeedback; serious games
►▼ Show Figures 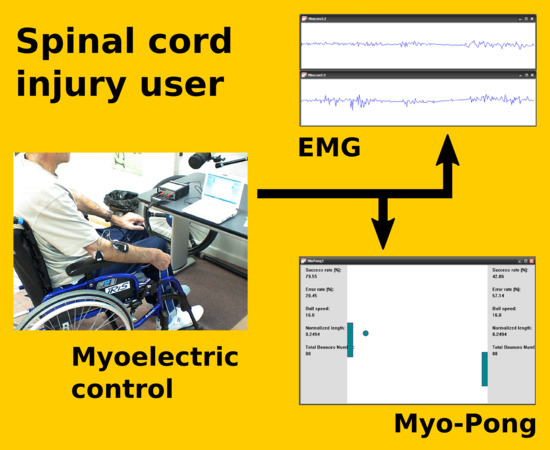