Effect of Pyrolysis Temperature on Biochar Microstructural Evolution, Physicochemical Characteristics, and Its Influence on Biochar/Polypropylene Composites
Next Article in Special Issue

:
In recent years, the installation of distributed generation (DG) of renewable energies has grown rapidly. When the penetration of grid-integrated DGs are getting high, the voltage and frequency of the power system may cause deviation. We propose an algorithm that reduces voltage and frequency deviation by coordinating the control of multiple battery energy storage systems (BESSs). The proposed algorithm reduces the total number of charging and discharging times by calculating the sensitivity coefficient of BESS at different nodes and then selecting the appropriate BESSs to operate. The algorithm is validated on a typical distribution testing system. The results show that the voltage and frequency are controlled within the permissible range, the state of charge of BESSs are controlled within the normal range, and the total number of charging and discharging cycles of BESSs are reduced.
Keywords:
battery energy storage system (BESS); coordinated control; voltage control; frequency control; state of charge (SOC)

(1)
The proposed coordinated control algorithm firstly calculates the required power for voltage and frequency deviation control, respectively, and then compares the two values and obtains an optimal regulating power for simultaneously solving the voltage and frequency deviation, which reduces the number of BESSs charging and discharging cycles, and improves the life time of the batteries.
(2)
The proposed method is compared with Lee’s algorithm [29] through the case studies. In Lee’s algorithm, the voltage and frequency regulation by BESSs are operated in a sequential order, which operates the BESSs more frequently. The results of the case study illustrate that a smaller number of charging/discharging cycles and better SOC control can be achieved by our proposed algorithm.

The remainder of this paper is organized as follows. Section 2 describes the proposed system architecture. Section 3 presents the problem formulation and solution algorithm. The simulation results in a 33-node distribution system is provided in Section 4. Section 5 presents the conclusion of this study.

2. System Framework of Distribution System with DGs and BESSs

The specific architecture proposed in this study is shown in Figure 1. Distributed generations convert renewable energy into electricity and integrate to the distribution system. There are several BESSs such as electric vehicles and batteries, which can be used for voltage/frequency regulation. The BESSs can interact with the control center through the communication network. The owner of BESSs can get profit by providing voltage/frequency regulation service [31,32,33,34,35,36]. The cost-benefit of a Smarter Network Storage project of 6 MW/10 MWh-BESSs in Great Britain has been investigated in [34]. Total social cost, such as battery cells, construction, and operating costs, is £7,402,284 (average value). The social benefit streams from BESSs like frequency response, arbitrage and carbon abatement can get £9,731,525 (average value). Comparing the costs and benefits, the profit can be taken by BESSs as £2,329,241, i.e., 31.5% of the cost.
In the structure, control center collects status information of BESSs through the communication network. To achieve the coordinated control of the BESSs, it is necessary to know the energy storage status. As show in Figure 2, status information includes the upper limit state of charge (), the lower limit state of charge (), the location information, the capacity of the energy storage device, and the connection status.
Status information is consisted by information matrix H, and we use the matrix representation of the characteristics of the BESS model. Specific steps are as follows:
The control center obtains the distance according to the position information of BESSs, and then formulates the distance matrix of Formula (1). where n indicates the number of the nodes in the distribution systems.
The control center formulates energy capacity matrix of Formula (2) according to the capacity of the BESSs.
The SOC limit is formulated as matrix of Formula (3) and Formula (4) according to the upper and lower limits of the current state of the BESSs.
Control center formulates SOC matrix of (5) according to the current SOC of the BESSs.
Finally, the information matrix H can be formulated as:
After developing the information matrix H, the control center optimizes the coordinated control according to the proposed algorithm, and sends the commands of the charging or discharging power to BESSs. BESSs receive commands from the control center, and then complete the corresponding operations. In the charging and discharging operation, the regulation power is completed by all the BESSs of each node. As a result, SOC of a single BESS will not be too high or too low.

IEEE 33-node power distribution system is applied to verify the proposed coordinated control algorithm (as shown in Figure 7) [39]. Node 1 is the reference node and the voltage is fixed at 1 p.u. The other 32 nodes are user nodes, and the allowed range of each node voltage is [0.9, 1.1] p.u. The test data are based on the generated power of PV and the load in Ota city, on June 1st, 2007 [40]. The simulation is carried out during one day, 24 h period is divided equally into 2880 slots, i.e., each slot is 30s.
In this paper, a Li-ion battery is considered as the BESSs. Figure 8 shows the change of SOC in different states. The horizontal axis of Figure 8 is 24 h, indicating a full-day SOC operation. In order to make the BESSs have a charging and discharging margin and prevent over charge and over discharge, SOC should be controlled in 0.1 ≤ SOC(t) ≤ 0.9.
In Figure 8, number of 1–5 indicates the BESS operation as follows:

We assumed each battery with the capacity of 23 kWh. The initial SOC of the batteries is assumed by the Gaussian distribution on [0.3, 0.4] with the mean value of 0.35, and the standard deviation is 1. The number of candidate nodes which are used to perform frequency regulation compensation is assumed as one third of the total number of BESSs of the node (x = n/3).
We assume 100 users in a node, and each user is equipped with a photovoltaic (PV) system. In this paper, the daily load data and PV generation data are referenced in the literature [40], which are showed in Figure 9. The PV output is large during the period of 9:15–11:40 and 12:15–15:10. The peak power is 9032 kW. Daily load curve fluctuates between 2306 kW and 4994 kW.

The voltage fluctuation curves before and after voltage regulation are shown in Figure 10 and Figure 11 respectively. Each curve in Figure 10 and Figure 11 each curve represents the voltage status of a node during the 24 h.
According to the voltage sensitivity coefficient, nodes number of 1–4 and 19–25 have small sensitivity coefficient and therefore voltage deviation is small in these nodes. It is can be seen from Figure 11 that during the period of 9:15–11:00 and 12:30–13:10, the grid is in an overvoltage state because of the large output of PV generation and low load consumption. During the time of 18:30–22:00, the grid is in an undervoltage state. The peak and valley of voltage are 1.13573 and 0.88816 p.u., respectively.
The result after voltage regulation is shown in Figure 11. The proposed algorithm regulates the voltage fluctuations within he permission range by coordinated control of BESSs charging and discharging. The maximum voltage deviation shown in Figure 11 is 0.09895 p.u.
Figure 12 shows the power system frequency deviation curve regulated by the proposed algorithm. Dashed and solid curves indicate the frequency before and after regulation, respectively. During the period of 6:40–7:05 and 11:45–12:15 frequency exceeds the lower limit, 9:35–10:30 and 12:10–12:45 frequency exceeds the upper limit. Actually, the net load (load-PV) that, shown in Figure 9, is in a high load state during 6:40–7:05 and 11:45–12:15, and in a low load state during the period of 9:35–10:30 and 12:10–12:45. In addition, the fluctuation of PV is intense during this period, the frequency fluctuation is consistent with the trend of the daily net load curve. After the regulation, the frequency of the power distribution system is within the normal range.
Because of the different sensitivity coefficients of each node, the variation of the SOC of BESS for all the nodes are different. Nodes numbering 1–4 and 19–25 have small sensitivity coefficient, therefore these nodes are selected as the candidate nodes for frequency regulation. The gaps between voltage regulation and frequency regulation are evenly distributed to the BESSs of the candidate nodes. Therefore, SOC variation of candidate nodes BESSs fluctuate greatly.
In order to show the dynamic analysis of our proposed coordinated control algorithm, we take a time point of 9:27:30, which is shown with black dot in Figure 10, Figure 11 and Figure 12. At this time point, the voltage fluctuation of Node 18 is the largest which reached 1.109 p.u., and the frequency deviation of distribution network reached 0.3402 Hz. Both of the voltage and frequency exceed the permissible range, which are needed to be regulated. According to the calculation of Section 3.2 and Section 3.3, the required power for the voltage and frequency regulation are 1065.68kW and 2902.68kW, respectively. As the power required for frequency regulation is larger than the required for voltage regulation, the total power of 2902.68kW was chose, and the difference part of 1837kW was allocated to the nodes with lower voltage sensitivity coefficient according to Section 3.4. After regulating, the frequency deviation of the distribution network reduced to 0.153Hz, and the voltage of Node 18 reduced to 1.06 p.u., the frequency fluctuation reduced 55.03% and the voltage reduced 15.32%, both of them are within a permissible range. In Lee’s algorithm, the BESSs are operated in a sequential order for the voltage and frequency regulation, and total power of 3968.36kW will be charged.
The proposed coordinated control algorithm is compared with Lee algorithm [29]. Figure 13 shows the total number of BESSs charging and discharging cycles, and Figure 14 shows the total BESS charging and discharging power. The number of charging cycles of Lee algorithm is 2312 and the number of discharges cycles is 7130. The number of charging and discharging cycles of proposed algorithm is 1597 and 3470, respectively. The number of charging cycles is reduced by 30.86% and the number of discharging cycles is reduced by 51.33%. As shown in Figure 14, the total charging power of the Lee algorithm is 3615.24 kWh and the discharge power is 3557.87 kWh. The charging power of the proposed algorithm is 2476.02 kWh, which is reduced by 31.51% compared to the LEE algorithm. The discharge power of the proposed algorithm is 3557.87 kWh, which is reduced by 38.71%.

This research was funded by Zhejiang Provincial Natural Science Foundation of China under Grant No. LQ18E070002.

The authors declare that there are no conflicts of interest regarding the publication of this paper.

Figure A1 shows the diagram of frequency regulation model through Simulink. We add a model of energy storage equipment to participate in primary and secondary frequency modulation based on a typical single-area power system model. “Governor” and “Prime Mover” are governor and prime mover models respectively. “Gen-Load” is generator inertia and load damping model, modules “-1/R”, “-B” and “Ki/s” constitute the primary and secondary frequency modulation model of the generator set, and “P” is the system load fluctuation. 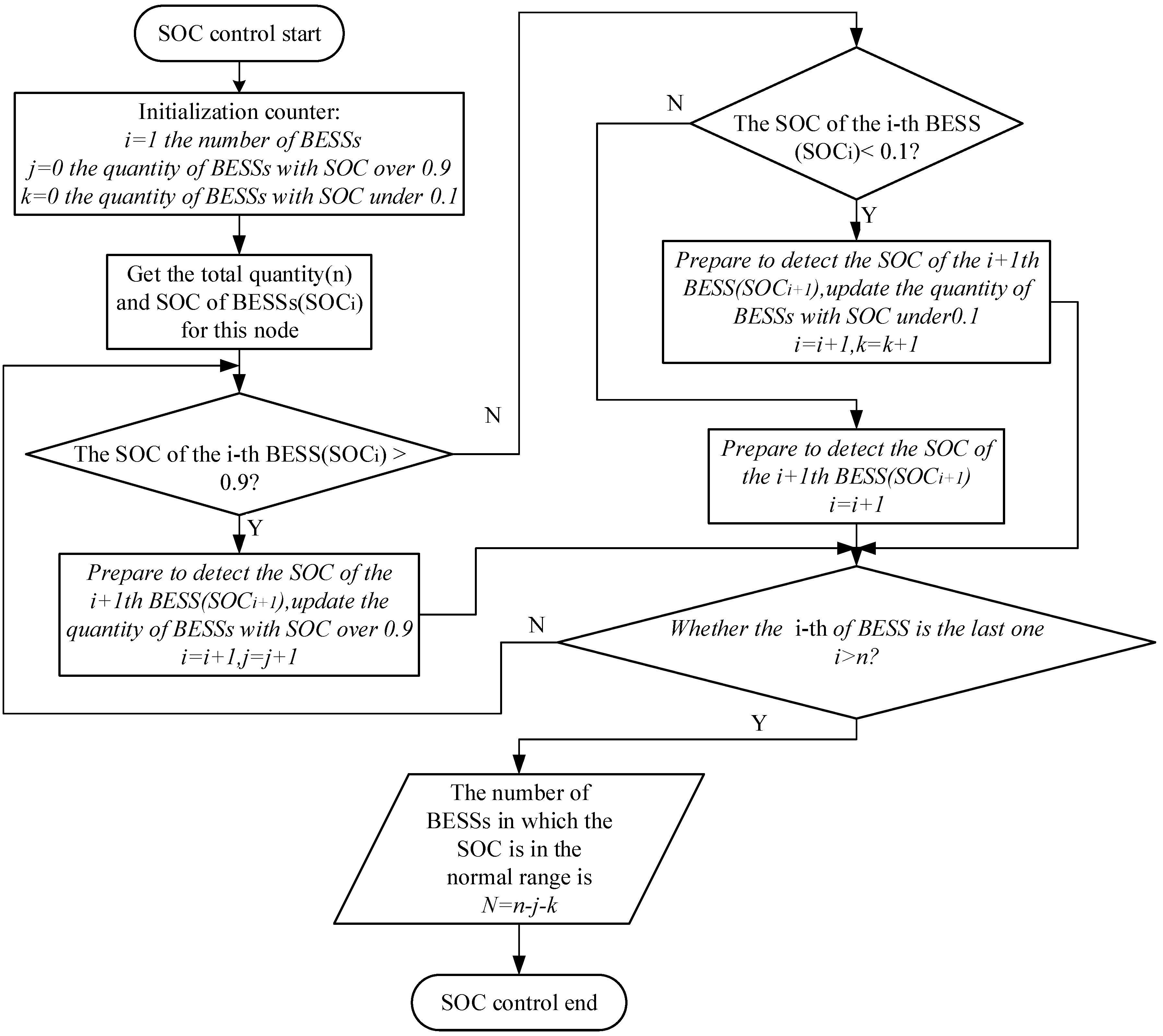 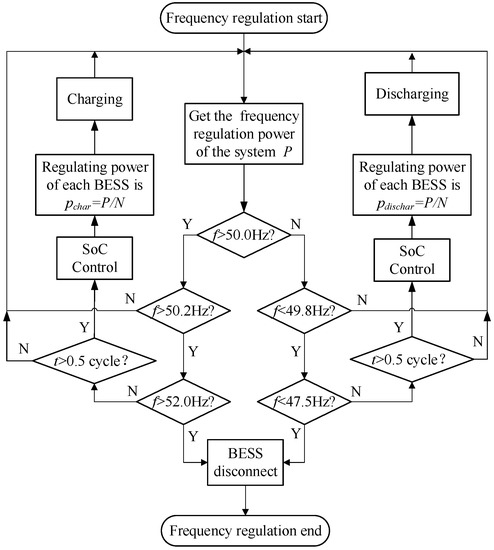 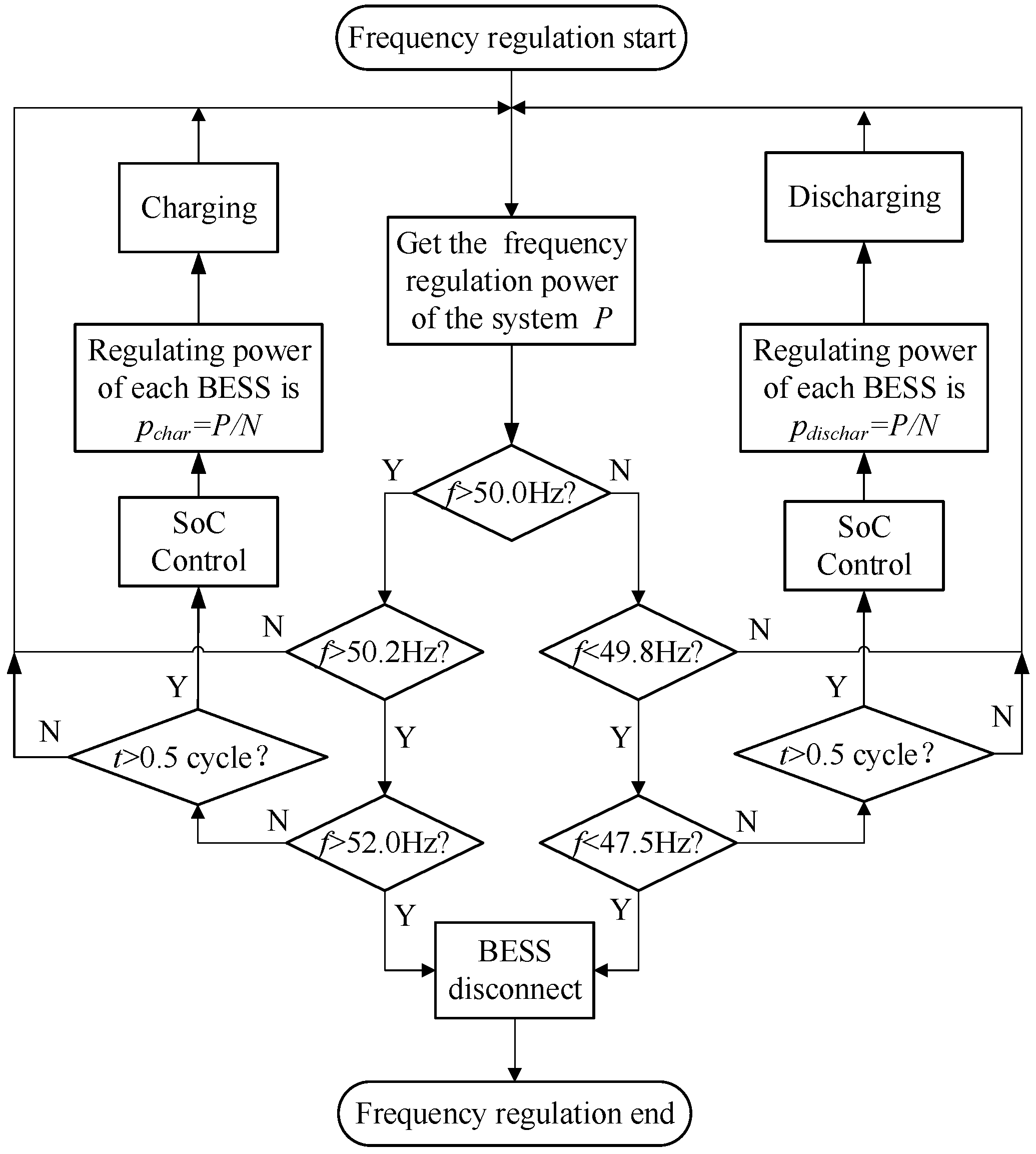 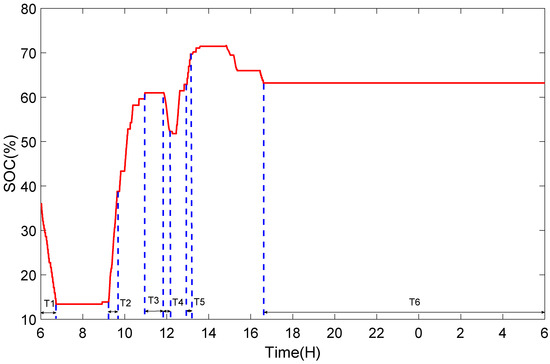 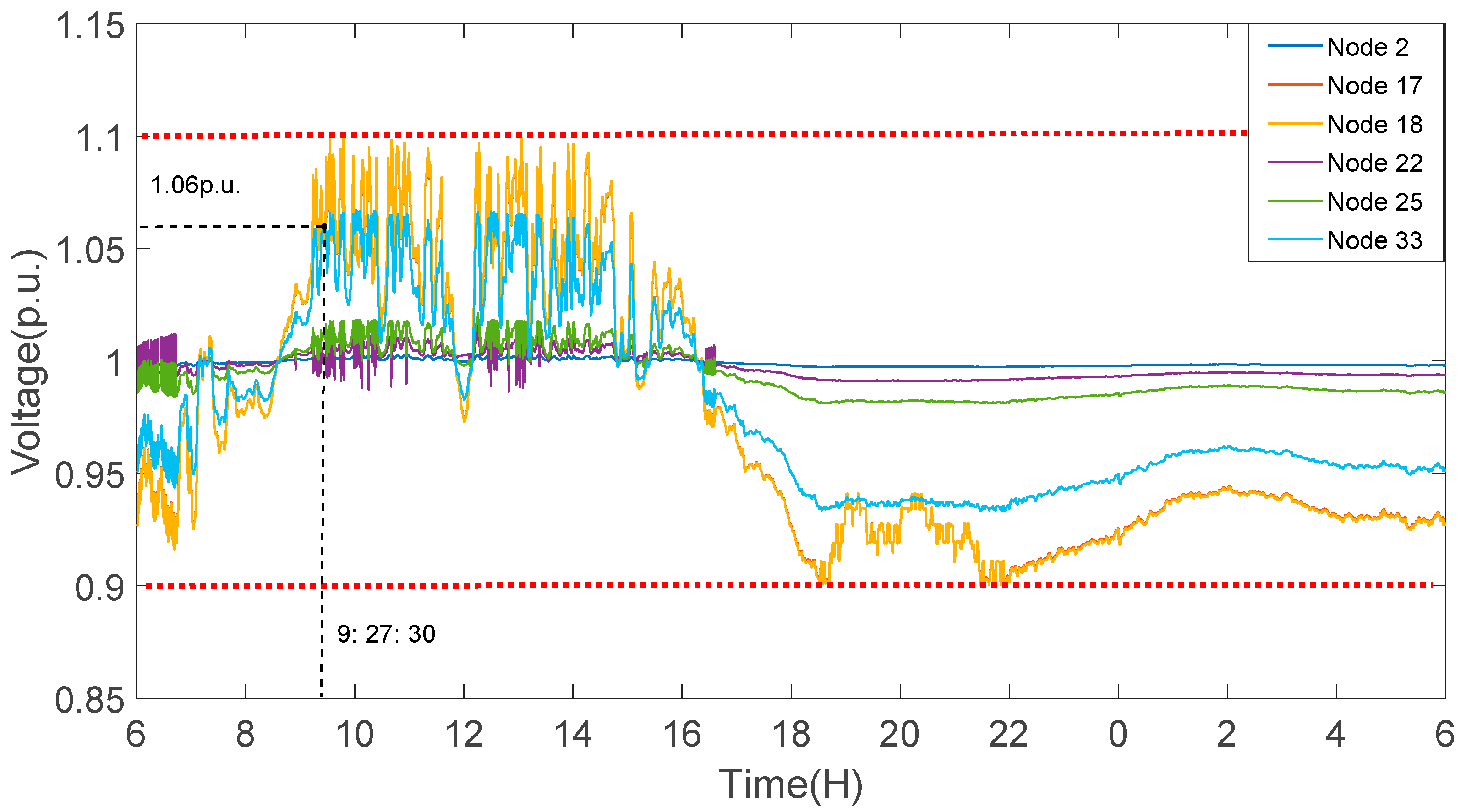 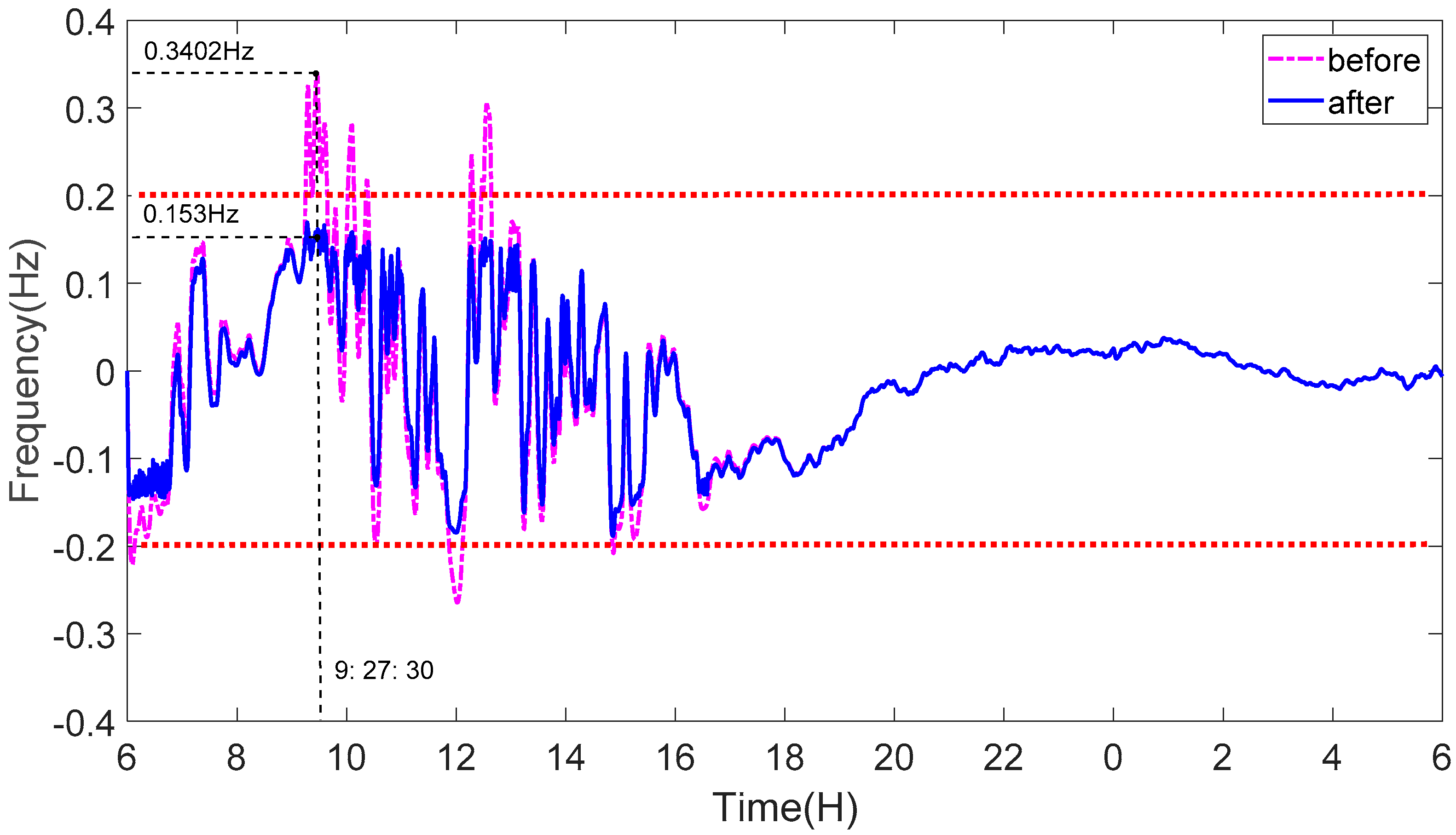