Described for the first time in 1937 by Kaiser [1], eosinophilic gastroenteritis (EG) is a rare condition characterized by patchy eosinophilic inflammation of one or more layers of the gastrointestinal (GI) tract with no secondary causes of eosinophilia. Clinical symptoms are not specific and differ according to the site, extension, and layer of the GI wall involved [2,3]. Most commonly, the GI tracts affected are stomach and duodenum [4].
Appendicular involvement of EG is rare and usually characterized by acute onset with a high rate of surgery [5,6]. The diagnosis is based on clinical presentation with abdominal pain, particularly in the inferior right quadrant, demonstration of eosinophilic infiltration of the appendicular wall, exclusion of other causes of peripheral eosinophilia, and absence of extra-intestinal diseases [7].
Intestinal ultrasound (IUS) represents a validated technique for the diagnosis and follow-up of several acute and chronic intestinal diseases, including acute appendicitis. Its bedside use has increased in emergency departments, reducing the need for more expensive radiological techniques, such as computed tomography scan (CT) [8]. Given its feasibility, tolerability, safety, and widespread availability, the application of IUS in the case of eosinophilic appendicular involvement in EG may play an interesting role in the diagnostic work-up and follow-up of this rare condition.
In our case report we aimed to emphasize the role of intestinal ultrasound as a valuable tool in diagnosing and monitoring intestinal involvement in EG, avoiding invasive tests and unnecessary surgery.
We have reported the case of a young man with sub-acute eosinophilic appendicular involvement, for whom IUS had a remarkable role in the clinical work-up and subsequent follow-up.

A 24-year-old man (L.C.) was admitted to our emergency room with lower abdominal pain, dyspepsia, and spontaneous 5-kg weight reduction (BMI 22.8 to 21.3). These symptoms had started in the previous months, with no association with fever, vomiting, or diarrhea. Salmonellosis (6 months earlier) was the only issue in his medical history. Neither drug assumption nor allergies were reported. The patient denied any recent travel abroad or raw food consumption.
On admission, the patient’s blood pressure, oxygen saturation, and heart and respiratory rate were normal. Physical examination revealed mild-severe abdominal tenderness in the lower and right quadrant.
Blood tests showed an elevated white blood cell (WBC) count (19,000/mm3), with normal hemoglobin, coagulation indices, and liver and renal function. Differential leukocyte formula was unavailable on admission.
An abdominal ultrasound was performed, with evidence of mild hepatosplenomegaly and an a-peristaltic, incompressible, dilated cecal appendix with wall thickness >6 mm with evidence of the “target sign”. These ultrasound features were consistent with mild appendicitis involvement.
Because of his refusal to be hospitalized, the patient was discharged with antibiotic therapy based on a 7-day amoxicillin/clavulanic-acid regimen.
Two days later he came back to our emergency room with persistence of symptoms and onset of non-bloody diarrhea (5–6 bowel movements per day). Vital signs and physical examination were normal, as were ECG and abdomen X-ray. Blood tests revealed an elevated WBC count with absolute eosinophilia (19,960/mm3; EOS 10,470/mm3). An empiric antibiotic regimen with ciprofloxacin and metronidazole was prescribed. A few days later, because of the persistence of severe abdominal pain in the lower quadrant, a contrast-enhanced CT scan was performed, revealing multiple reactive lymph node enlargement and excluding acute appendicitis or abdominal masses. The patient was then admitted to a medical unit. Infectious enteritis being suspected, stool cultures for Shigella, Salmonella, Campylobacter, C. difficile antigen, E. coli O157:H7, Yersinia spp., Giardia, Strongyloides, Toxocara, Cryptosporidium were carried out and tested negative. The test for serum Schistosoma, Amoeba spp. and HIV antibodies was negative. Given the presence of multiple mesenteric lymphadenopathy in the CT scan, immunophenotyping by flow cytometry was performed on peripheral blood, revealing no phenotypic alterations of B/T-lymphocytes.
Despite the patient always denying any upper respiratory tract symptoms, chest X-ray and ANCA (antineutrophil cytoplasmic antibodies) screening were carried out in order to rule out eosinophilic granulomatosis with polyangiitis, and they tested negative.
A progressive reduction of bowel movements and normalization of the WBC count were observed during the antibiotic treatment, albeit the persistence of absolute eosinophilia. Esophagogastroduodenoscopy and colonoscopy were proposed, but the patient refused.
He was then discharged with the indication to continue the diagnostic work-up as an outpatient and to have his blood monitored.
The recurrence of abdominal discomfort in the right lower quadrant associated with a new rise of the eosinophilic count (WBC 12,800/mm3, EOS 6200/mm3) was observed 8 weeks after the first admission. The patient was then admitted to our gastroenterology department. The detection of HTLV antibodies, anti-Anisakis IgE, and screening for ANA, ENA, and ANCA tested negative. Serum IgA, IgG, IgM, C3, and C4 were measured and resulted within the normal range.
All the infection tests, including stool cultures for bacteria and parasites, were repeated and tested negative, thus excluding any infective causes of hyper-eosinophilia. Therefore, in order to rule out chronic eosinophilic leukemia, mutations of FIP1L1-PDGFRA were searched for and tested negative.
In the GI ultrasound, the jejunal and ileal loops appeared slightly dilated with increased liquid or slightly echoic content (Figure 1). Reactive mildly enlarged mesenteric lymph nodes (maximum diameter 10 × 5 mm) were still present. In the right lower quadrant, a thickened hyper-vascularized appendix (maximum diameter: 6.9 mm) was evidenced (Figure 2), surrounded by hypertrophic activated mesentery and a small amount of free abdominal fluid (arrow). The patient (L.C.) gave his consent for the publication of information about his case, as contained in the present case report.
An ileocolonoscopy was performed and showed a highlighted, white-speckled lesion next to the appendicular orifice. Well-oriented endoscopic biopsies of the whole tracts being explored were collected.
An esophagogastroduodenoscopy was also performed and showed a macroscopically normal pattern; multiple biopsies were obtained against the suspicion of eosinophilic gastroenteritis.
Histological examinations showed a remarkable eosinophilic infiltration in the duodenal (35–50 eosinophils/HPF), ileo-cecal (60 eosinophils/HPF), and colonic (25–30 eosinophils/HPF) mucosa.
These findings confirmed our clinical suspicion of eosinophilic gastroenteritis on the basis that, according to the pathologist expertise in our hospital, the diagnostic cut-off values for the diagnosis of EG are as follows: 35–40 eosinophils/HPF in the duodenum, 40 eosinophils/HPF in the ileum-cecum, and 25–30 eosinophils/HPF in the rest of the colon.
We prescribed a glucocorticoid regimen based on prednisone 30 mg/die, with the indication of rapid and progressive tapering during the following two weeks. The eosinophilic count rapidly decreased and gastrointestinal symptoms disappeared. The patient was discharged.
Gastrointestinal US was repeated at the end of the steroidal therapy, with evidence of a normalized appendicular diameter (5.5 mm), persisting mild hyper-vascularization, and reduction of adjacent free fluid.
After 8 weeks from the discontinuation of prednisone, a new US was performed with evidence of complete resolution of the appendicular inflammation and disappearance of all pathological findings (Figure 3a,b).
A maintenance therapy with a budesonide-based regimen was prescribed (starting at 9 mg). Good control of symptoms and reduction of the eosinophilic count was achieved, with progressive steroid tapering to 3 mg/day. Because of the chronic adverse effects of steroidal therapy, as particularly observed in long-term therapy, an attempt with ketotifen was chosen and is actually ongoing. The patient is currently symptomless and blood tests, including the eosinophil count, are normal. 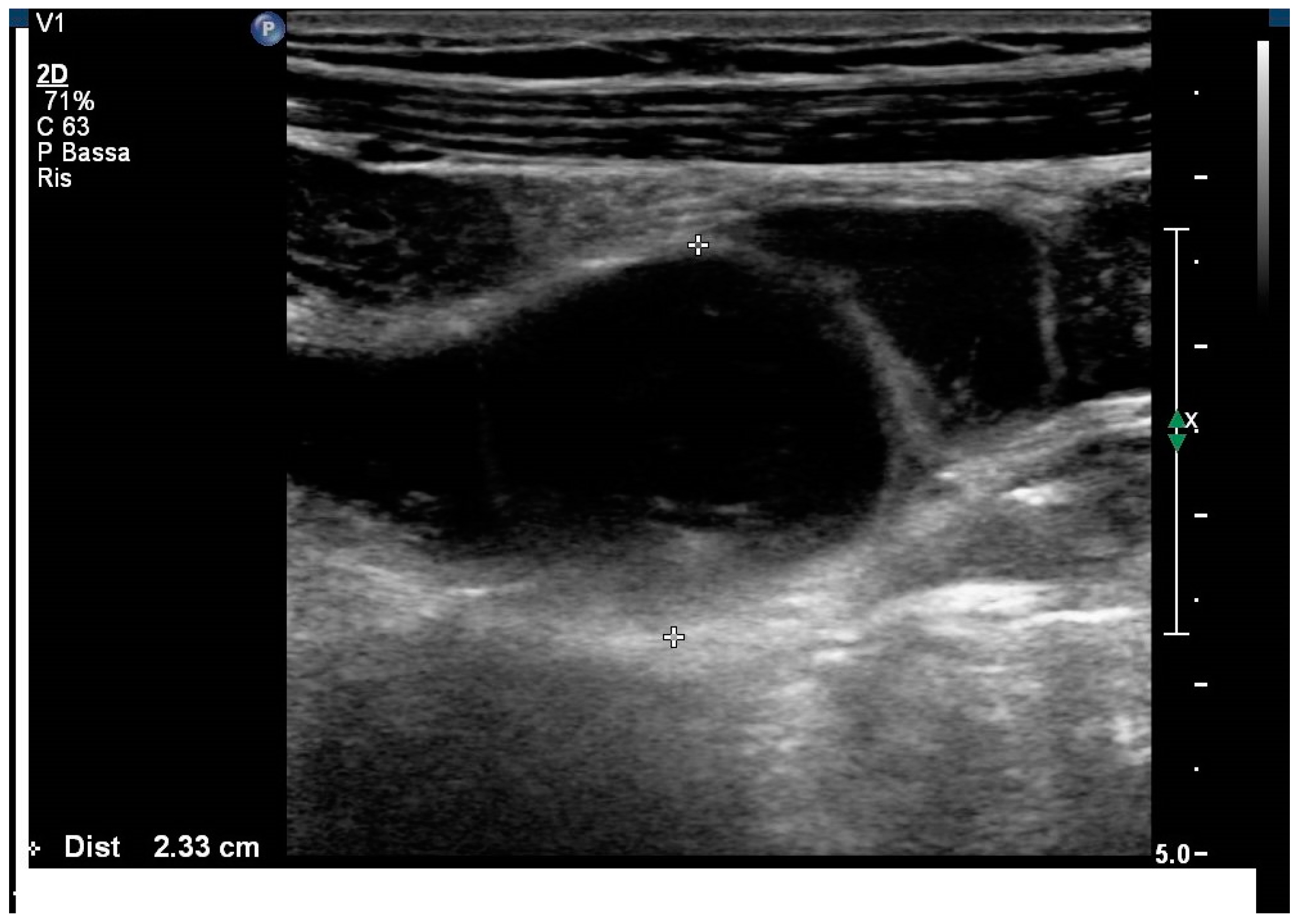 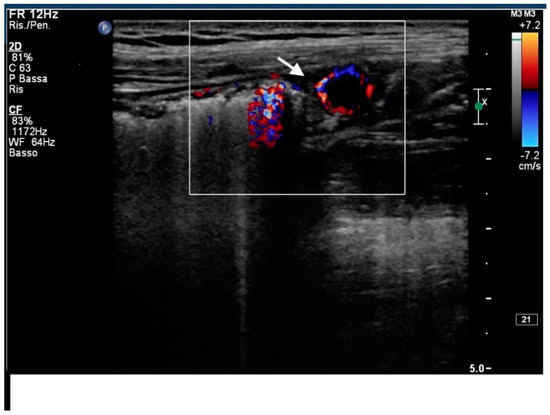 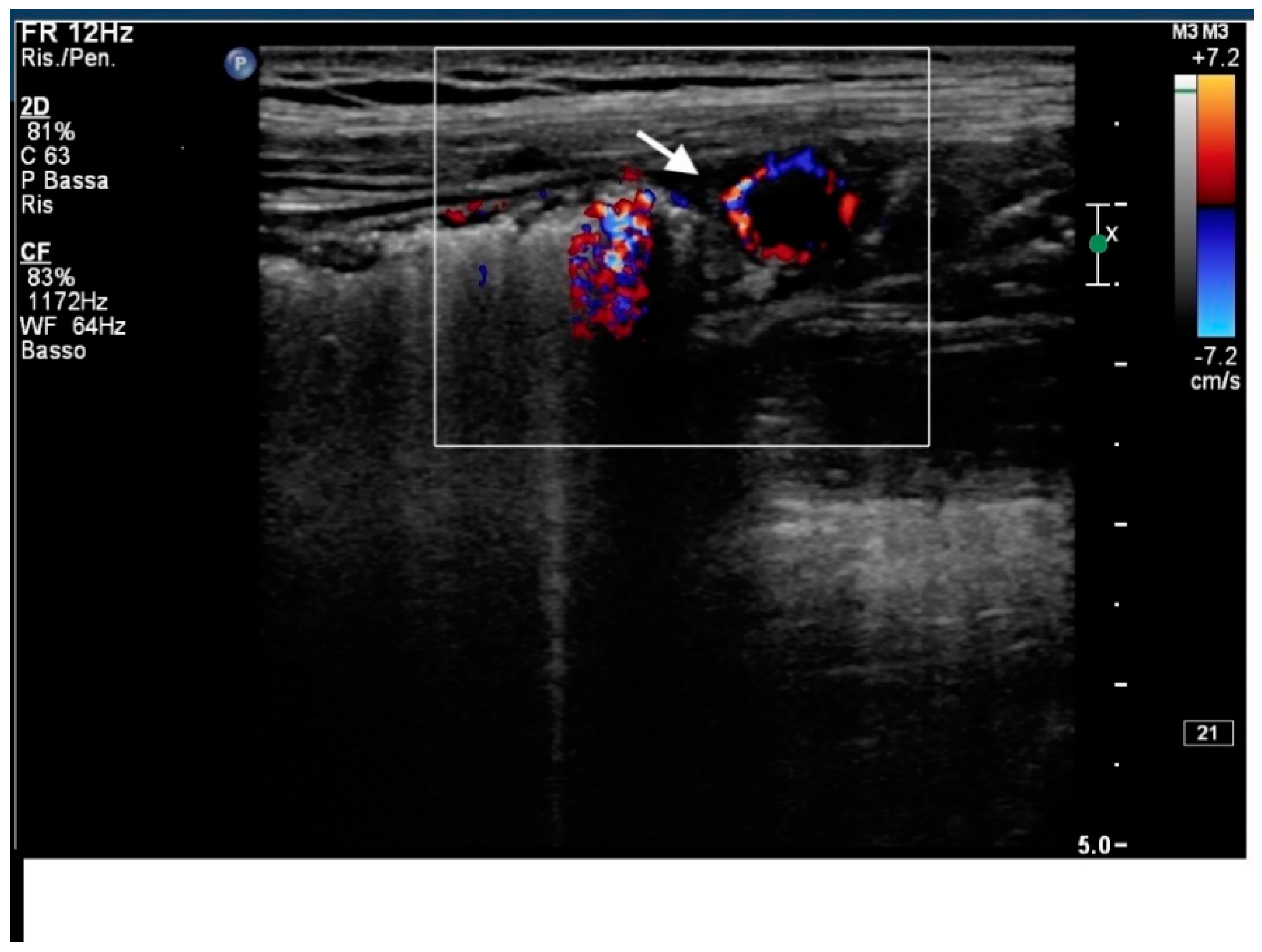 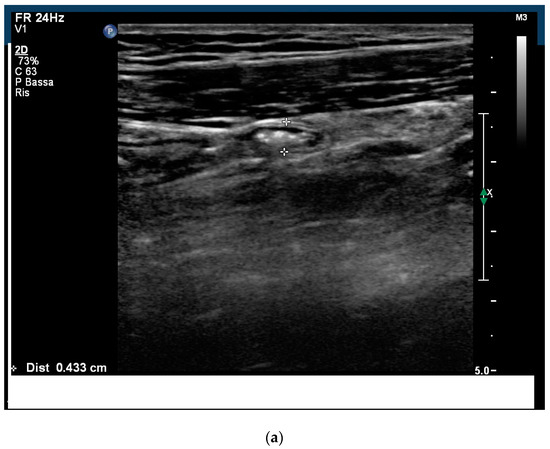 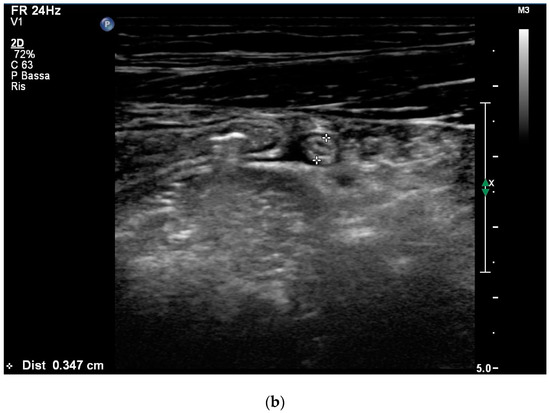 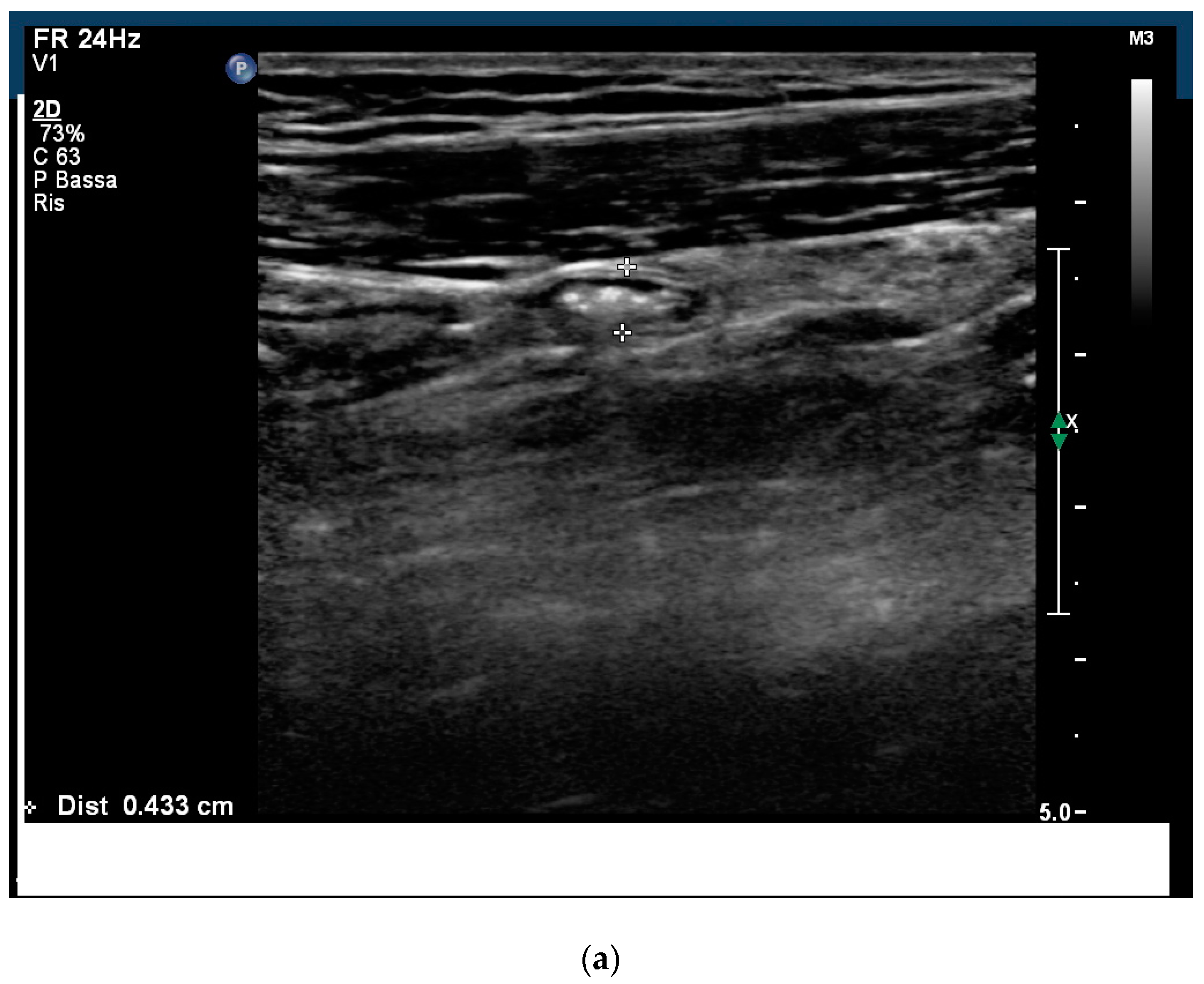 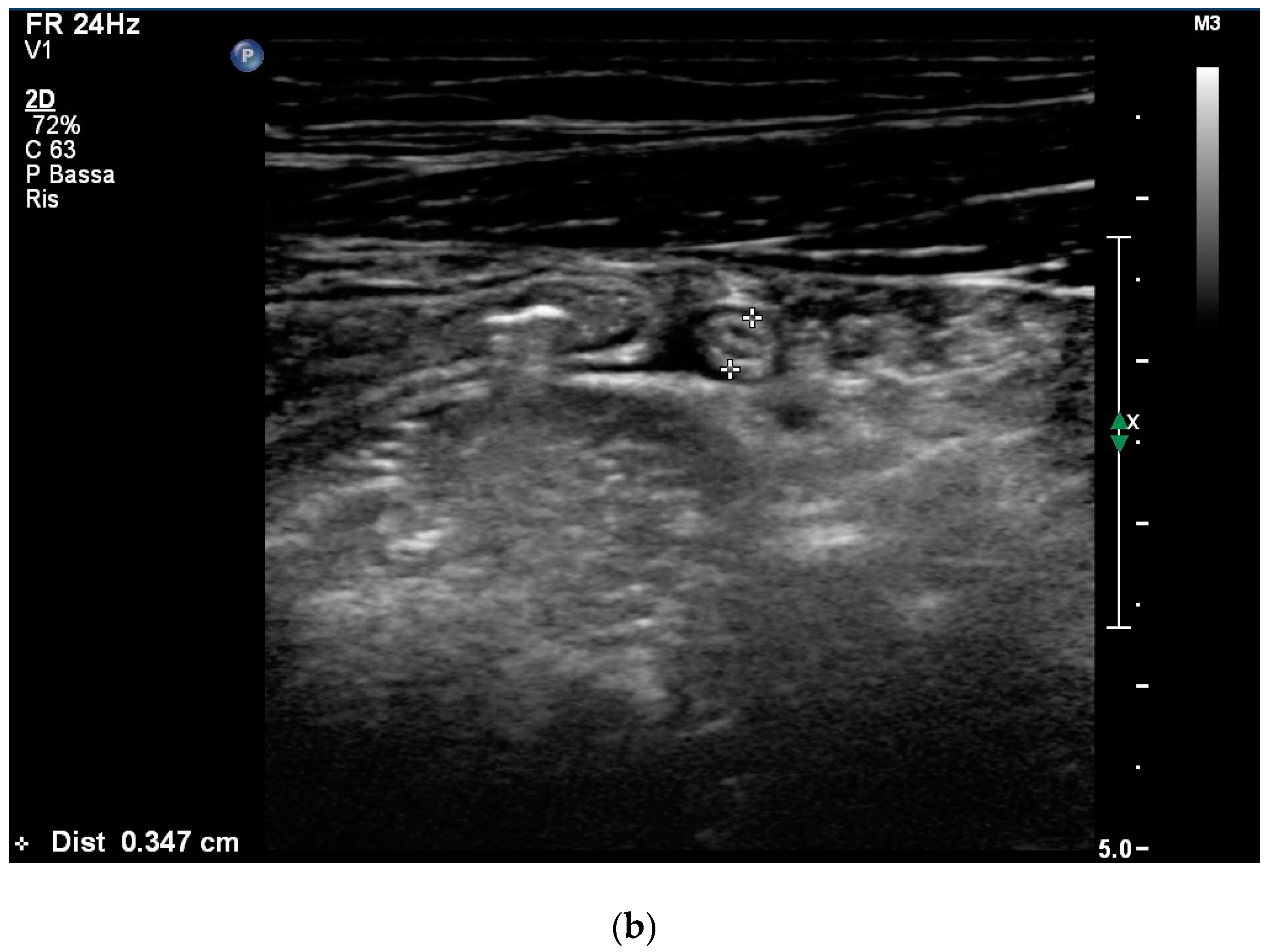