This paper analyzes the use patterns of a residential smart grid pilot in the Netherlands, called PowerMatching City. The analysis is based on detailed monitoring data measured at 5-min intervals for the year 2012, originating from this pilot which was realized in 2007 in Groningen, Netherlands. In this pilot, smart appliances, heat pumps, micro-combined heat and power (µ-CHP), and solar photovoltaic (PV) systems have been installed to evaluate their efficiency, their ability to reduce peak electricity purchase, and their effects on self-sufficiency and on the local use of solar electricity. As a result of the evaluation, diverse yearly and weekly indicators have been determined, such as electricity purchase and delivery, solar production, flexible generation, and load. Depending on the household configuration, up to 40% of self-sufficiency is achieved on an annual average basis, and 14.4% of the total consumption were flexible. In general, we can conclude that micro-CHP contributed to keep purchase from the grid relatively constant throughout the seasons. Adding to that, smart appliances significantly contributed to load shifting in peak times. It is recommended that similar evaluations will be conducted in other smart grid pilots to statistically enhance insights in the functioning of residential smart grids. View Full-Text
Keywords: smart grids; renewable energy; flexibility; demand shifting; photovoltaic systems; smart appliances smart grids; renewable energy; flexibility; demand shifting; photovoltaic systems; smart appliances
►▼ Show Figures 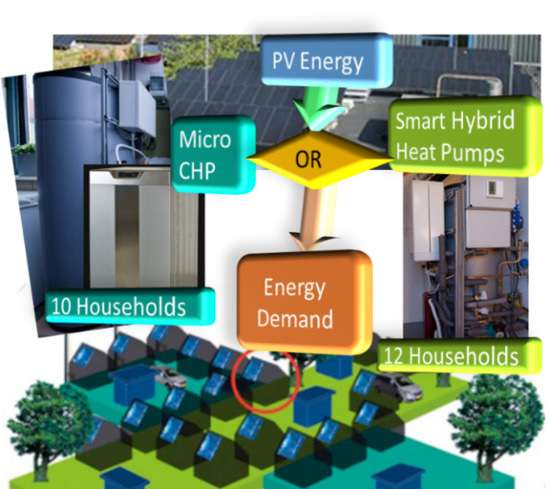