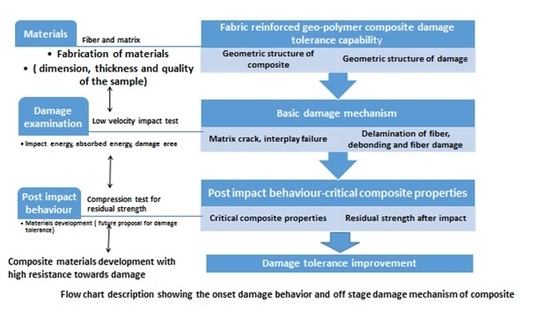 Geopolymer binder was prepared by mixing 49% alumina-silicate powder, 44.12% alkali activator containing NaOH/KOH, and 6.88% metakaolin powder. The combination was stirred for 10 min by a home-made mixer machine for a complete homogenous mixture.
Composite samples (100 × 100 × 3 mm3) were prepared by hand lay up technique with fabrics of carbon (Figure 1a), E-glass (Figure 1b), and basalt (Figure 1c) reinforcement in alumino-silicate geopolymer matrices with metakaolin binders using piles of fabrics in the 0–90° direction [12].
The assembled fabric reinforced geopolymer composites were placed in a vacuum bag and cured under 0.003 MPa at room temperature for 24 h. The bag with the composite was then placed in a curing oven at 70 °C for 12 h [12]. To maintain a thickness of 3 mm, the fabrics were arranged in different layers, such as 7 layers of E-glass, 10 layers of carbon, and 15 layers of basalt fabric. The volume fraction of the fiber, the matrix, and the voids of the three laminates were calculated according to the formulas reported in Equations (2)–(4): where Vf, Vm, Vv are the volume fractions of fibers, matrix, and voids in a sample, n is the number of fiber layers in a composite sample, and t, L, and b are the thickness, length, and width of a composite sample, respectively. The volume fractions of fiber, matrix, and voids of the three laminates are reported in Table 1.
The geopolymer matrix composition was 2.04, 31.80, 0.08, 15.15, 1.74, 0.63, 0.24, and 48.32% in Al, Si, P, K, Zr, Na, Ca, and O, respectively. The samples were impacted by the drop weight method, and the damage was created at the center of the material (Figure 2).
The indenter was struck from the height of 0.50 m on the surface of the composite to create a notch. Five specimens for each material system with dimensions of 100 × 130 × 3 mm3 were tested with an in-house built drop weight factor. A hardened steel striker with a hemispherical tip of 16 mm diameter was impacted on the sample from a chosen drop height. The weight of the impactor was considered to be 3.072 kg. The energy, 6.2 J, was achieved from the chosen drop height of 0.50 m. A schematic diagram of the system is reported in Figure 3.
The samples were examined in detailed damage areas using the µCT techniques before and after the impact test. The specimens for the μCT investigation were cut with a dimension of 50 × 50 × 3 mm3 around the central damage area. The distance of the outer edge was 25 mm towards the boundary from the center of impact and the notch generated on the composite surface.

The µCT analysis was carried out in a SkyScan 1272 (Bruker, Kontich, Belgium) with a source voltage of 100 kV and a source current of 100 µA using a camera pixel size of 16 µm. Slices of the µCT images were collected from the impacted composite by scanning their images with the rotation of 0.28°. 3D images were built using the CT Vox graphics software (Bruker, Kontich, Belgium; parameters in Table 2). µCT imaging not only affords advantages over the conventional approach but also eliminates the tedious sample preparation.
Besides analyzing internal structures of the composite, µCT provides a better understanding of the behavior and damage of the composite materials undergoing impact loading. The µCT method helps to detect and measure the fiber breakage, which leads to the basic understanding of the mechanisms of crack growth in composites. Three samples were tested for each individual specimen by the µCT method before and after damage. µCT slices were obtained and examined at each degree of composites rotation to observe differences in fiber rupture and matrix debonding. More than 450 slices were produced by μCT for each sample.
For the carbon fabric composite, a selection of the slices through the damaged area was done (Figure 4).
Using all of the slices, a 3D reconstruction image was created with the Vox software (Figure 5).

µCT reveals the internal geometry of the fabric reinforced composite materials, showing the overall image of the composite from the impact point towards the edge of the sample and the fiber breakage, notch, or depth of the impact areas. The advantages of this technique are that it not only shows the impact area but also very clearly shows the fiber rupture in the different slice images. Furthermore, other parameters—like porosity and sample position—can be obtained from the 3D image. The mechanism of damage of the composite is well explained on the basis of the μCT investigation of the damaged area. The following conclusions can be deduced from the obtained results:
1. Fabric reinforced composites were much less affected by the mechanical impact than the E-glass and the basalt reinforced composites.
2. As examined for basalt composites, μCT was found to be one of the most useful techniques for examining the different failure mechanisms for geopolymer composites.
3. μCT provided the internal geometry (including 3D image) of the fabric reinforced composite materials, including parameters like porosity and sample position. This is the prime advantage of μCT over other techniques.
4. Our study showed that the durability of the carbon fiber reinforced composite showed better residual strength in comparison with the E-glass fiber one.
5. The carbon fiber reinforced composite had a much better impact resistance, with fiber damage only in the central area with a limited amount of fiber sliding in the surrounding areas.

Ignazio Blanco is grateful to the MIUR for the grant “Fund for basic research activities”, and to the Department of Civil Engineering and Architecture of the University of Catania for supporting the project MATErials LIfe foreCAst (MATELICA). 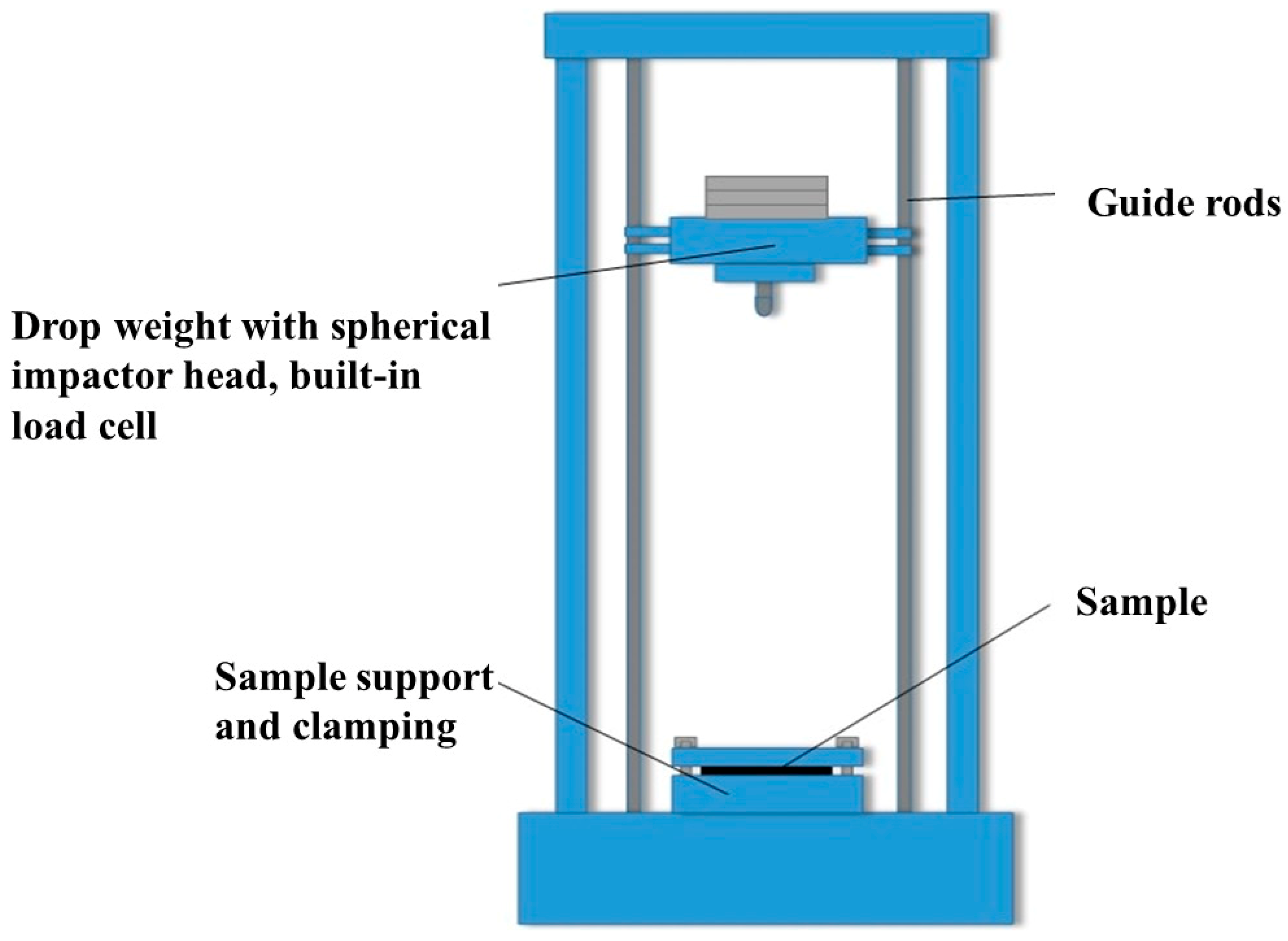 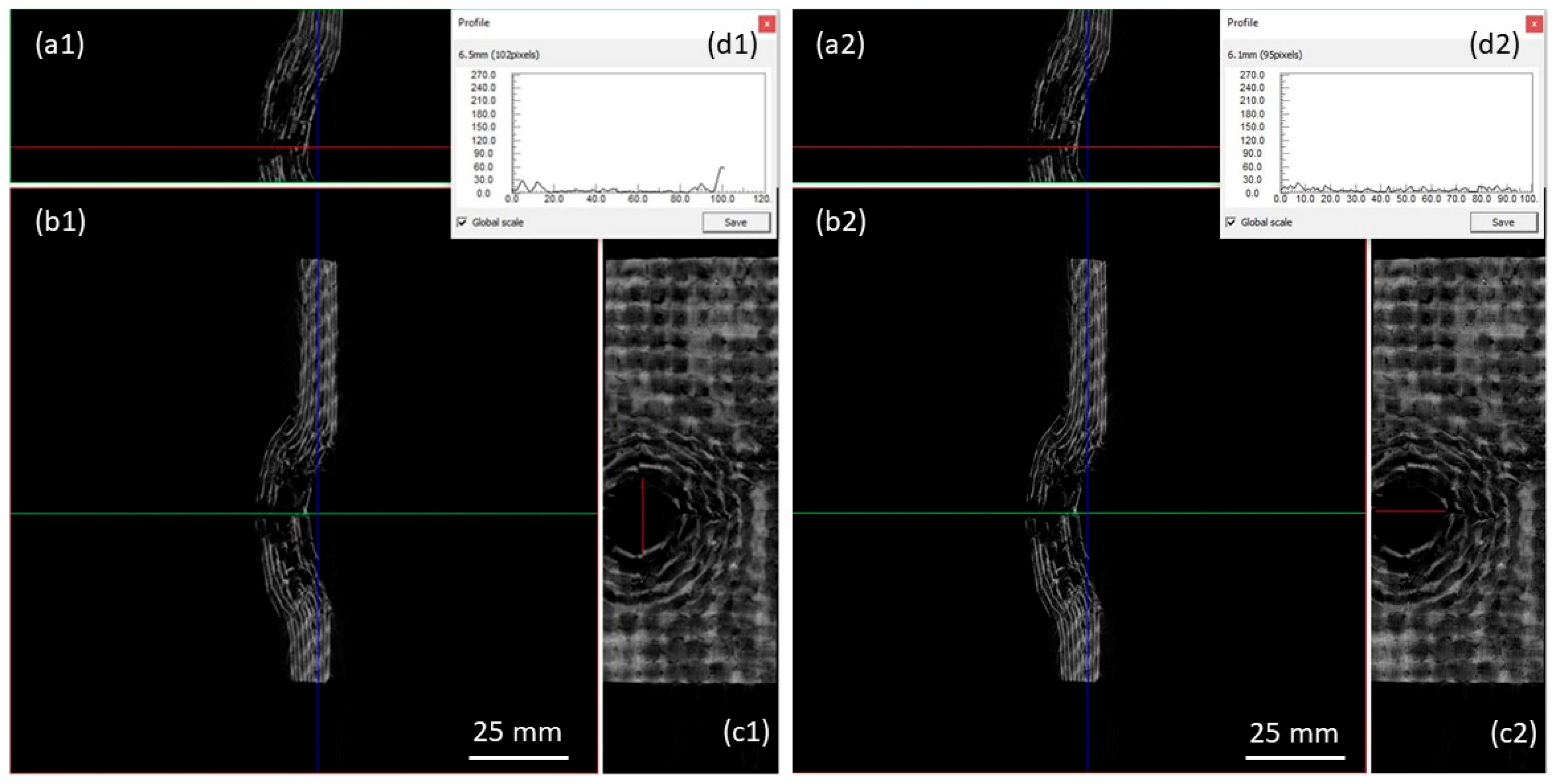 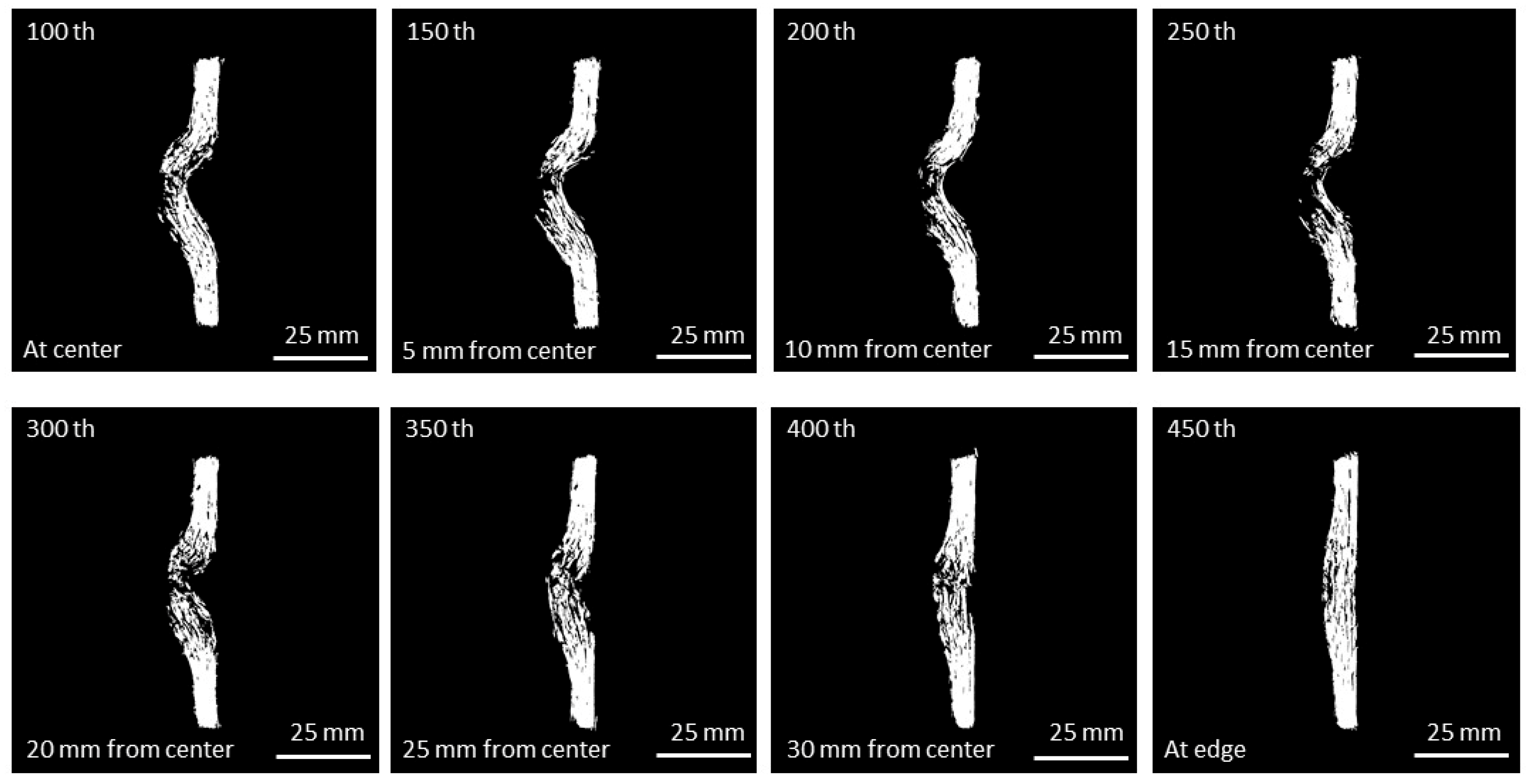 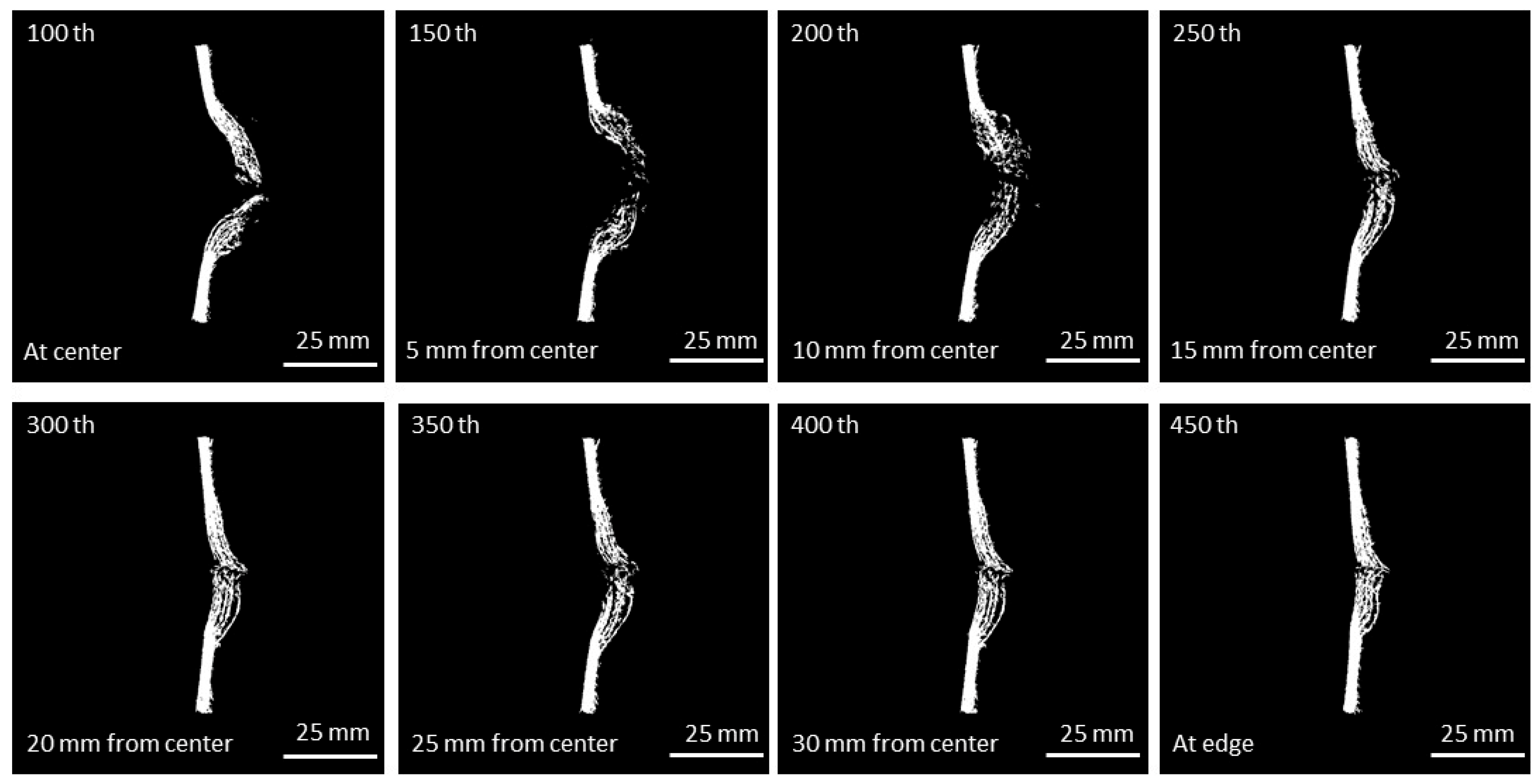 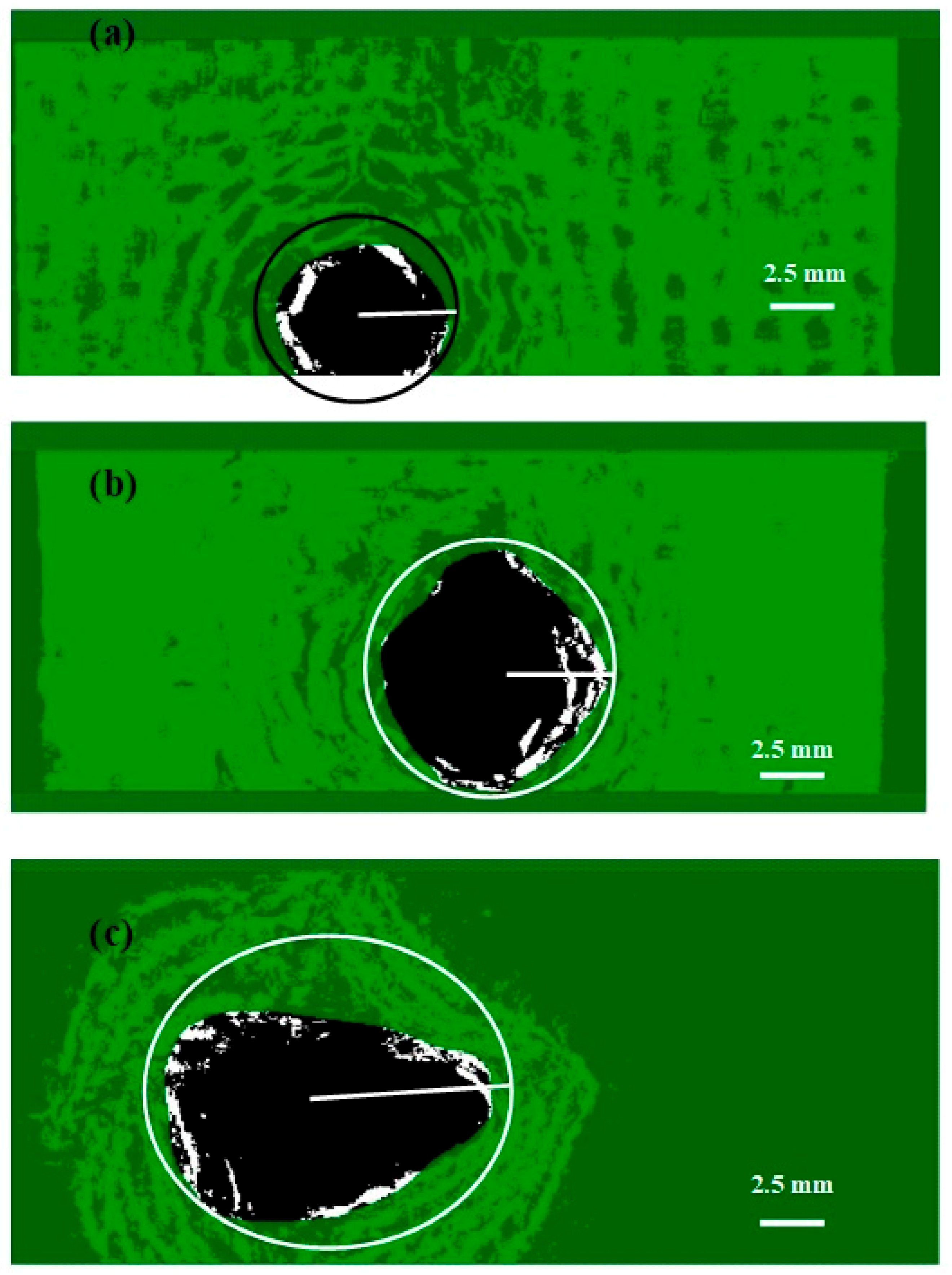