The Influence of Noise Emitted by Vehicles on Pedestrian Crossing Decision-Making: A Study in a Virtual Environment
Previous Article in Journal

Design and Simulation of a Capacity Management Model Using a Digital Twin Approach Based on the Viable System Model: Case Study of an Automotive Plant
Previous Article in Special Issue

How Can Low-Frequency Noise Exposure Interact with the Well-Being of a Population? Some Results from a Portuguese Municipality

Noise pollution is the second most harmful environmental stressor in Europe. Portugal is the fourth European country most affected by noise pollution, whereby 23.0% of the population is affected. This article aims to analyze the effects of exposure to low frequency noise pollution, emitted by power poles and power lines, on the population’s well-being, based on a study of “exposed” and “unexposed” individuals in two predominantly urban areas in north-western Portugal. To develop the research, we used sound level (n = 62) and sound recording measurements, as well as adapted audiometric test performance (n = 14) and surveys conducted with the resident population (n = 200). The sound levels were measured (frequency range between 10 to 160 Hz) and compared with a criterion curve developed by the Department for Environment, Food and Rural Affairs (DEFRA). The sound recorded was performed 5 m away from the source (400 kV power pole). Surveys were carried out with the “exposed” and “unexposed” populations, and adapted audiometric tests were performed to complement the analysis and to determine the threshold of audibility of “exposed” and “unexposed” volunteers. The “exposed” area has higher sound levels and, consequently, more problems with well-being and health than the “unexposed” population. The audiometric tests also revealed that the “exposed” population appears to be less sensitive to low frequencies than the “unexposed” population. View Full-Text
Keywords: low-frequency noise; noise pollution; power poles and power lines; discomfort due to noise; residential areas low-frequency noise; noise pollution; power poles and power lines; discomfort due to noise; residential areas
►▼ Show Figures 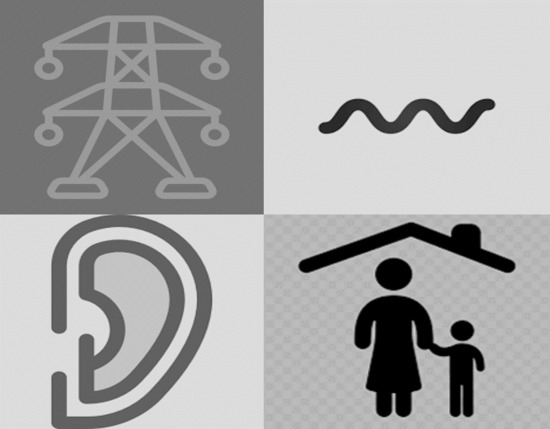