In this study, we developed a carbon black (CB)-embedded carbon nanofiber (CNF) as a Pd support, which showed a high level of formic acid oxidation reaction (FAOR) activity. For the support preparation, heat treatment involving calcination at 1000 °C in a nitrogen atmosphere (carbonization) followed by calcination at 850 °C in water vapor (steam activation) was conducted to form a CB, which contained carbon nanofibers made from a polyacrolynitrile (PAN) fiber prepared by electrospinning. This catalyst showed a high level of FAOR activity. In this situation, the CB was also heat-treated, therefore, it was unclear whether the origin of the high FAOR activity of the CB-embedded CNF was caused by the CNF itself or the heat treatment of the CB. In order to establish the cause of the high FAOR activity of the CB-embedded CNF, the CBs underwent several heat treatments; i.e., stabilization, carbonization, and steam activation. Two types of carbon black with different pore structures, i.e., Ketjen black and Vulcan XC-72, were used to investigate the FAOR activity. The appropriate heat treatment of the CB promotes the improved FAOR activity; however, excessive heat treatment caused a deterioration in the FAOR activity, especially for Ketjen due to the presence of numerous micropores. However, by embedding the CB into the CNF, the FAOR activity improved, especially in the case of Ketjen, even though the embedded CB underwent several heat treatments. The optimum ratio of CB/PAN in the CB-embedded CNF was also investigated. The highest FAOR activity was observed at 0.25 CB/PAN for both the Vulcan and Ketjen. The electronic state of Pd3d in which the binding energy of the metallic Pd shifted to a lower binding energy suggested that the metal–support interaction is strong at the CB/PAN ratio of 0.25. On the basis of these results, it was found that heat treatment of the CB by embedding it in the CNF is a promising way to achieve a metal–support interaction without destroying its structure. View Full-Text
Keywords: formic acid oxidation reaction; embedded CNF; heat treatment; morphology; pore distribution formic acid oxidation reaction; embedded CNF; heat treatment; morphology; pore distribution
►▼ Show Figures 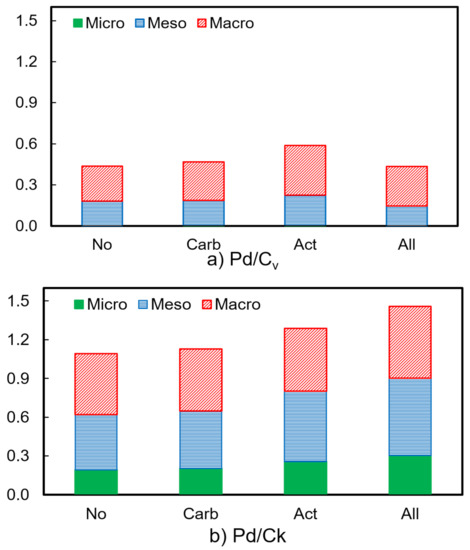