Design, Application and Effectiveness of an Innovative Augmented Reality Teaching Proposal through 3P Model
Next Article in Special Issue

For software maintenance, bug reports provide useful information to developers because they can be used for various tasks such as debugging and understanding previous changes. However, as they are typically written in the form of conversations among developers, bug reports tend to be unnecessarily long and verbose, with the consequence that developers often have difficulties reading or understanding bug reports. To mitigate this problem, methods that automatically generate a summary of bug reports have been proposed, and various related studies have been conducted. However, existing bug report summarization methods have not fully exploited the inherent characteristics of bug reports. In this paper, we propose a bug report summarization method that uses the weighted-PageRank algorithm and exploits the 'duplicates’, ‘blocks’, and ‘depends-on’ relationships between bug reports. The experimental results show that our method outperforms the state-of-the-art method in terms of both the quality of the summary and the number of applicable bug reports. View Full-Text
Keywords: data-based software engineering; text summarization; PageRank; issue tracking system; bug report relationships data-based software engineering; text summarization; PageRank; issue tracking system; bug report relationships
►▼ Show Figures 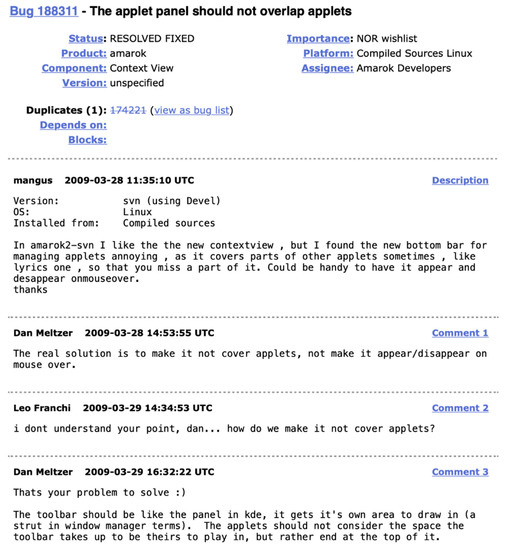