Analytical Model for Predicting the UCS from P-Wave Velocity, Density, and Porosity on Saturated Limestone
Next Article in Special Issue

This study outlines the applicability of four metaheuristic algorithms, namely, whale optimization algorithm (WOA), league champion optimization (LCA), moth–flame optimization (MFO), and ant colony optimization (ACO), for performance improvement of an artificial neural network (ANN) in analyzing the bearing capacity of footings settled on two-layered soils. To this end, the models estimate the stability/failure of the system by taking into consideration soil key factors. The complexity of each network is optimized through a sensitivity analysis process. The performance of the ensembles is compared with a typical ANN to evaluate the efficiency of the applied optimizers. It was shown that the incorporation of the WOA, LCA, MFO, and ACO algorithms resulted in 14.49%, 13.41%, 18.30%, and 35.75% reductions in the prediction error of the ANN, respectively. Moreover, a ranking system is developed to compare the efficiency of the used models. The results revealed that the ACO–ANN performs most accurately, followed by the MFO–ANN, WOA–ANN, and LCA–ANN. Lastly, the outcomes demonstrated that the ACO–ANN can be a promising alternative to traditional methods used for analyzing the bearing capacity of two-layered soils.
Keywords: bearing capacity analysis; artificial neural network; metaheuristic algorithms bearing capacity analysis; artificial neural network; metaheuristic algorithms

Soil bearing capacity is one of the most crucial engineering parameters which needs to be meticulously investigated before any construction action [1,2]. Thus, having an accurate approximation of the bearing capacity is a very important prerequisite of many geotechnical engineering projects as it is a function of various soil characteristics [3]. The ultimate applicable stress (Fult) is obtained based on the maximum settlement ratio, which is 0.1 of the footing width [4,5]. In this regard, many scholars investigated or introduced relationships to give the Fult [6,7]. Lotfizadeh and Kamalian [8] used the stress characteristic lines method for forecasting the static bearing capacity of strip footing installed on two-layered soils. Up to now, different numerical and analytical approaches were utilized to analyze the bearing capacity [9,10,11]. However, as a matter of fact, traditional methods and laboratory approaches are not applicable without spending a huge amount of time and money. On the other hand, due to the high competency of artificial intelligence techniques in different engineering applications, they can be used as inexpensive yet accurate models for estimating geotechnical parameters like bearing capacity.
The advent of soft computing approaches provided proper accurate models such as artificial neural network (ANN), adaptive neuro-fuzzy inference system (ANFIS), etc. for numerous engineering calculations with a focus on estimation tasks. These models were also successfully used for bearing capacity analysis [12,13,14]. In this sense, Padmini et al. [15] employed three models of neuro-fuzzy, ANN, and fuzzy for predicting the ultimate bearing capacity of shallow foundations (on cohesionless soil). Their results showed the superiority of intelligent models to popular bearing capacity theories. Also, Alavi and Sadrossadat [16] employed linear genetic programming to estimate the ultimate bearing capacity of shallow foundations resting on rock masses.
Metaheuristic algorithms suggest potent solutions for several optimization problems. They are also used for optimizing the performance of well-known predictive models like the support vector machine (SVM), ANN, and ANFIS [17,18,19]. As for the application of metaheuristic algorithms in bearing capacity analysis, different algorithms were applied to enhance the accuracy of the mentioned models [2,20,21]. Moayedi et al. [22] applied the biogeography-based optimization (BBO) algorithm to ANN and ANFIS for estimating the failure likelihood of shallow footings. The results showed that the used algorithm can increase the classification accuracy of the ANN (from 98.2% to 98.4%) and, more considerably, the ANFIS (from 97.6% to 98.5%). Likewise, Moayedi et al. [23] compared the optimization capability of the dragonfly algorithm (DA) and Harris hawks optimization (HHO) in adjusting the computational parameters of the ANN. Their study revealed that both these algorithms can effectively handle the mentioned task. However, referring to the calculated values of area under the curve (AUC), the DA (AUC = 0.942 and error = 0.1171) performed more accurately than the HHO (AUC = 0.915 and error = 0.1350).
According to the literature review, despite the broad application of popular metaheuristics (e.g., imperialist competition algorithm (ICA) and particle swarm optimization (PSO)) for bearing capacity analysis [2,24,25], there are still many unused techniques which might be more capable. Hence, the main focus of the present paper was to investigate the applicability of several metaheuristic algorithms, namely, whale optimization algorithm (WOA), league champion optimization (LCA), moth–flame optimization (MFO), and ant colony optimization (ACO), for optimizing the performance of the ANN to discover powerful models. The necessity of coupling these algorithms lies in some computational drawbacks [26,27] of the ANN which can be prevailed through proper adjustment of the weights and biases. In other words, the main contribution of these algorithms to the stated problem is to benefit metaheuristic advantages for the accurate evaluation of the relationship between bearing capacity and soil parameters.
Hereafter, the paper is structured in four major parts. The used algorithms are described in Section 2, data provision is explained in Section 3, results are presented and discussed in Section 4, and Section 5 gives the conclusion.

The artificial neural network (ANN) is the basic model of this study which we aimed to optimize. ANNs showed high capability for estimating different engineering parameters [28,29,30]. Their high robustness in dealing with complex and non-linear tasks makes the ANNs universal approximators [31]. The idea of neural learning was first suggested by McCulloch and Pitts [32]. The ANN can be represented by different notions like radial basis function (RBF) and generalized regression neural network (GRNN), but the most common of these is multi-layer perceptron (MLP) [33]. An ordinary view of the MLP is depicted in Figure 1. It follows a so-called backpropagation (BP) learning method [34] with a Levenberg–Marquardt (LM) training algorithm [35] by default. This model benefits the mentioned items in mapping the relationship between two variables called input(s) and target(s). Mathematically, assuming T as the input of the j-th computational unit, the response (O) is calculated as follows:where F stands for the activation function, and the terms Wj and bj are the corresponding weight and bias, respectively.

Due to the successful performance of metaheuristic algorithms in optimizing regular predictive models, in this study, four recently developed algorithms are applied to the ANN. The considered optimizers are the whale optimization algorithm (WOA), league champion optimization (LCA), moth–flame optimization (MFO), and ant colony optimization (ACO), which are used as potential search methods for finding the optimal solution to a given problem. In the case of this study, a general MLP is given as the problem, and, concerning a cost function, the algorithms aim to find the best weights and biases for the network.
The WOA was designed by Mirjalili and Lewis [36], inspired by the bubble-net hunting of humpback whales. Three major stages of this algorithm are (a) shrinking encircling hunt, (b) exploitation (i.e., bubble-net attacking), and (c) exploration (i.e., searching for the prey). More information about the WOA can be found in previous studies [37,38,39,40]. The LCA was proposed by Kashan [41], based on sporting competitions in sports leagues. Considering the league schedule programming and some relationships for determining the winner/loser team in an artificial league, the most appropriate solution is found. The LCA was detailed in previous studies [42,43,44]. As a novel nature-inspired optimization technique, the MFO was suggested by Mirjalili [45]. The pivotal idea of this algorithm is the navigation method of moths, which is known as transverse orientation. The candidate solutions in the MFO are moths, and their positions in space express the problem’s variables. The optimization process of this optimizer was well described in previous studies [46,47,48]. Lastly, the name ACO implies a population-based optimization technique which mimics the foraging behavior of ant herds. It was presented by Dorigo and Di Caro [49]. In this algorithm, artificial ants guide each other to achieve a proper (i.e., short) path leading to a promising food source. For more details, please refer to References [50,51,52].
The pseudo-code of the WOA, LCA, MFO, and ACO algorithms are shown below.

By implementing a two-dimensional (2D) axisymmetric finite element method, a shallow footing settled on a two-layered soil was analyzed in different conditions. The settlement (Uy) was derived in each stage. A total of 901 analyses were carried out by 15-node triangular elements, where the effective variables were unit weight (), friction angle, elastic modulus (), dilation angle, Poisson’s ratio (v), applied stress (), and setback distance (m). Figure 2 illustrates the distribution pattern of these factors.
The descriptive statistics of the dataset are also presented in Table 1. As can be seen, the minimum and maximum values obtained for the settlement were 0 and 0.10 m, respectively. Similar to a previous study [23], it was deemed that, if the Uy is less than 0.05 m, the system fails; otherwise, it remains stable. The failure and stability of the system are represented by values 1 and 0, respectively. The gathered dataset (without normalization) was then randomly divided into two groups, namely, training (for development of intelligent models) and testing (for evaluating the prediction capability of the models). In this regard, 721 samples (i.e., 80% of whole data) were specified to the first group, and the remaining 180 samples (i.e., 20% of whole data) served as the testing data (addressing unseen soil conditions).

To meet the objective of the study (i.e., investigating the optimization capability of the abovementioned metaheuristic algorithms), the algorithms should be coupled with the ANN. The aim of this work was to let this algorithm find the most appropriate matrix of the weights and biases for the ANN. To this end, firstly, an ANN with one hidden layer containing six neurons (determined by a trial-and-error process) was proposed as the base model. Thus, regarding the number of input/output parameters, the considered MLP took the form 7 × 6 × 1. Note that, in the present study, the activation functions of the hidden and output neurons were set to be “tangent-sigmoid (i.e., Tansig)” and “purelin”, respectively. Next, it was mathematically synthesized with the WOA, LCA, MFO, and ACO algorithms to create WOA–ANN, LCA–ANN, MFO–ANN, and ACO–ANN neural ensembles.

The classification accuracy of the models was measured using a well-known criterion, namely, the area under the receiving operating characteristic curve (AUROC). Note that it was obtained by plotting the ROC diagrams, which is a good way of assessing the accuracy in diagnostic problems, such as natural hazard models [57,58,59,60,61]. Moreover, two error criteria of RMSE and mean absolute error (MAE) were used to measure the performance error of the models. Equation (3) expresses the formulation of the MAE.

4.3. Accuracy Assessment of the Predictive Models

The optimization potential of four wise metaheuristic techniques, namely, WOA, LCA, MFO, and ACO, was evaluated in this paper. The algorithms were coupled with an artificial neural network, and the developed ensembles were applied to an important geotechnical problem, bearing capacity analysis. It was revealed that ACO–ANN was the most accurate model. After that, the MFO–ANN was the second efficient ensemble. Based on the findings of this study, the combination of neural computing and metaheuristic techniques (especially the ACO–ANN) provides fast and inexpensive yet accurate models for analyzing the stability of the footings over two-layered soils. This is in contrast to the use of traditional methods (e.g., laboratory studies and finite element techniques), which are time-consuming and entail implementing costly and destructive tests. Furthermore, a comparison with conventional methods (MLP neural network) showed that using metaheuristic techniques can be an advantageous way of enhancing their performance (i.e., around 95% accuracy of prediction). In fact, this research suggests the use of powerful inspirations from real-world phenomena for optimizing the computational parameters of the ANN.

H.M. and D.T.B. wrote the manuscript, and discussed and analyzed the data. H.M. and P.T.T.N. edited, restructured, and professionally optimized the manuscript. 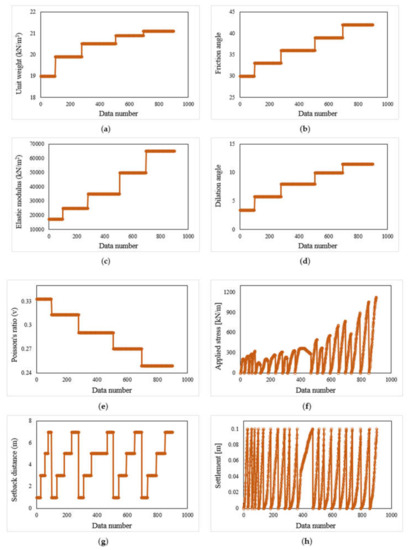 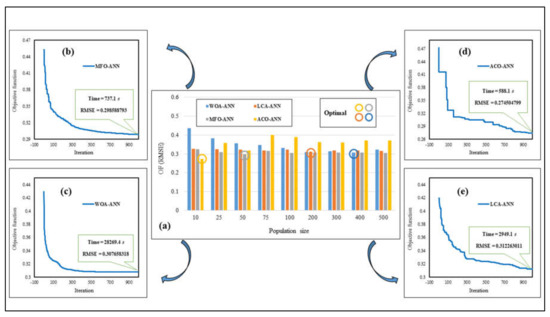 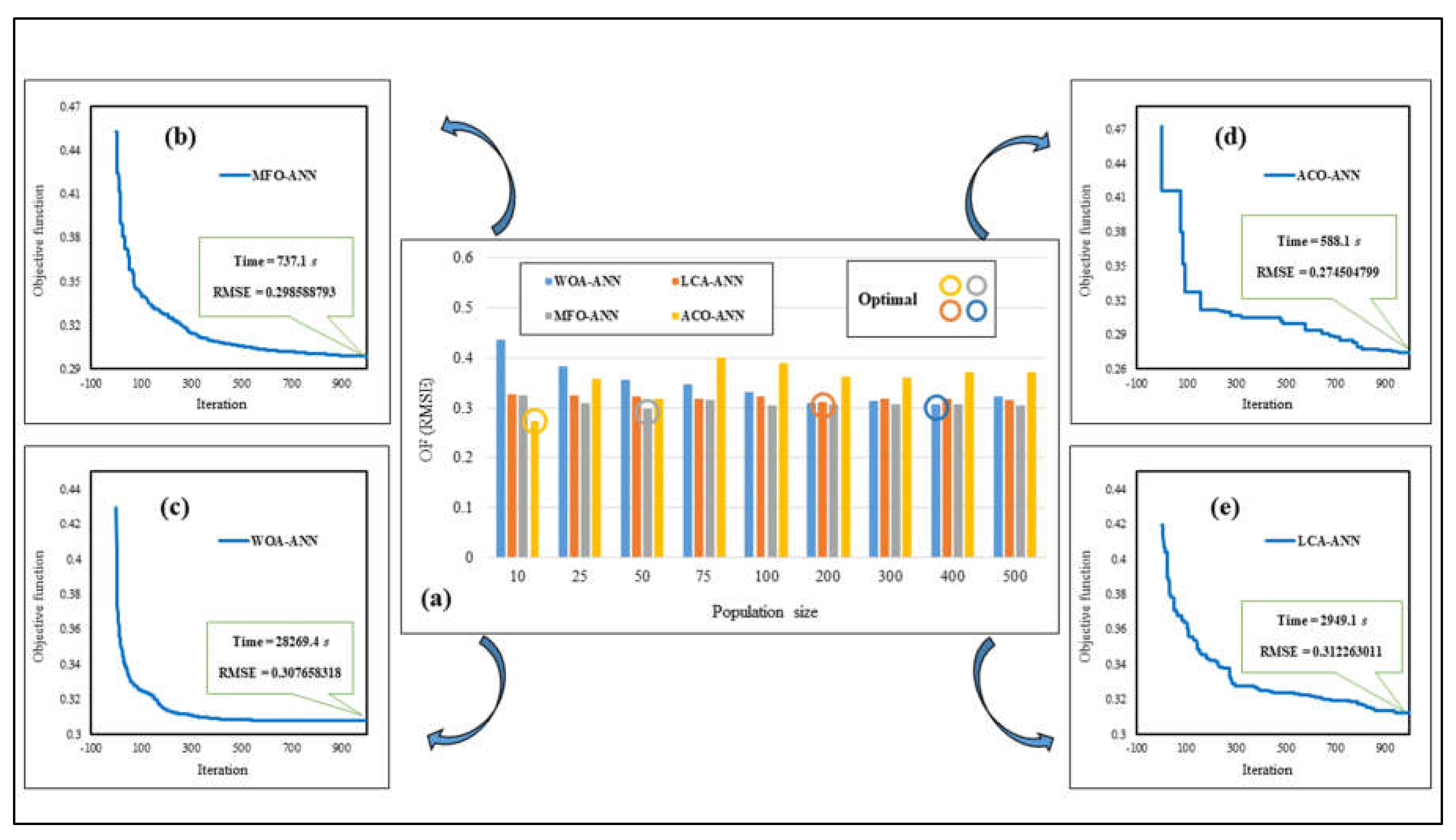 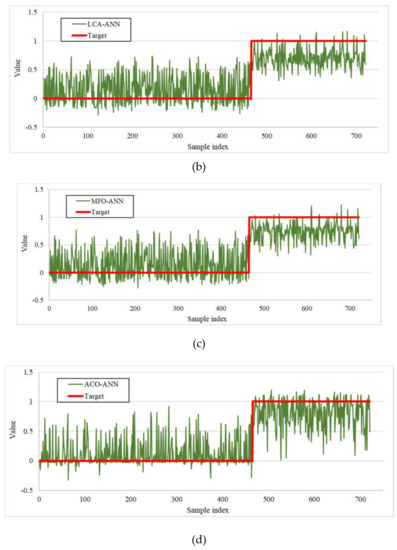 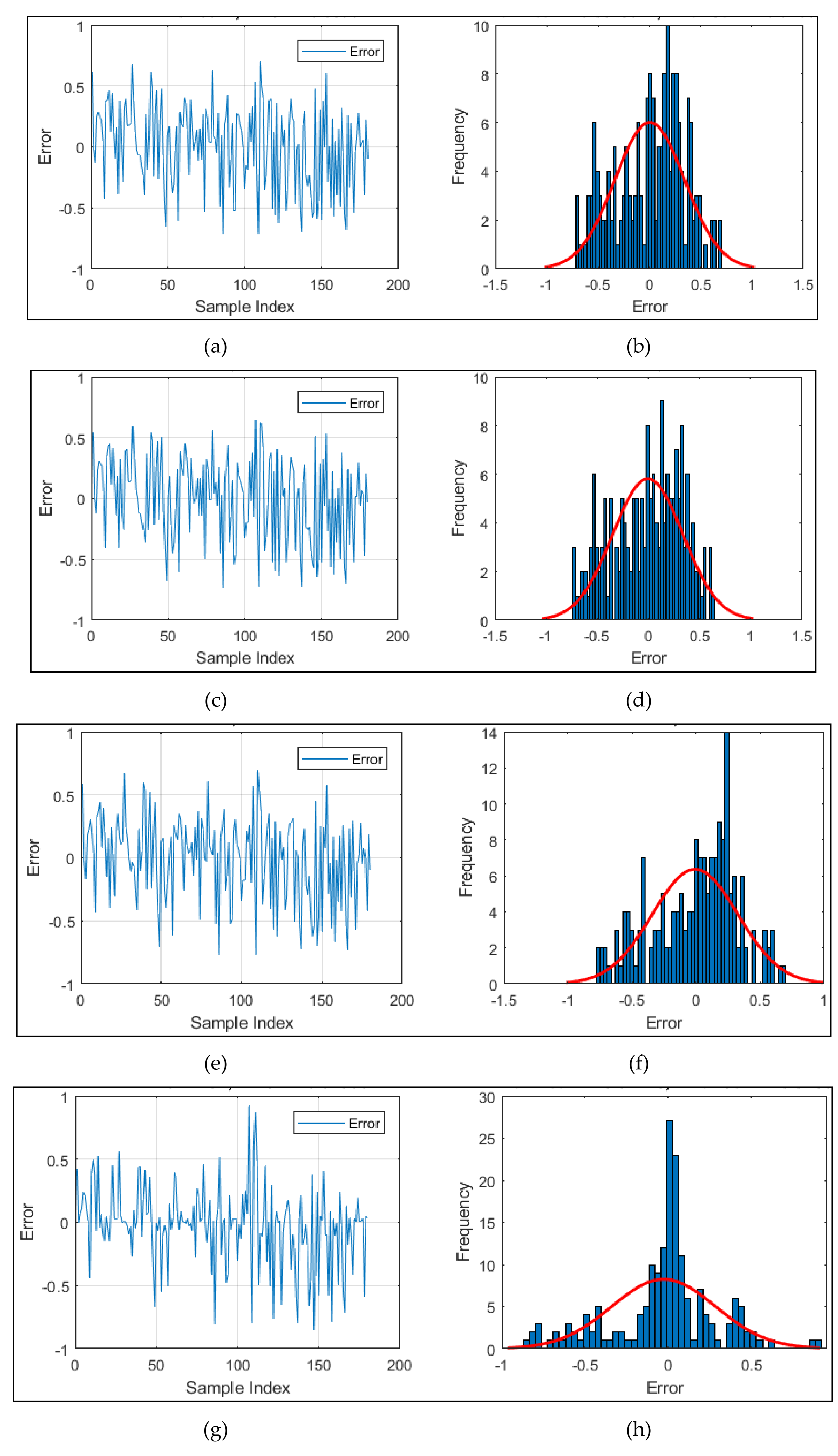