Coalbed methane (CBM) is a clean and efficient energy source. The efficient development of CBM could not only increase the clean energy supply but also improve the safety of coal mine production and reduce greenhouse gas emissions. In China, the CBM reserves above 2000 m are estimated at 36.81 trillion m3, which is equivalent to the amount of reserved conventional natural gas, ranking in third place globally after Russia and Canada [1]. However, CBM reserves are characterized by their low saturation, low permeability, low reservoir pressure, and relatively high metamorphic grade. In most mining areas, the coal seam permeability is 10−4–10−3 mD, which is 3–4 orders of magnitude lower than that in the United States and Australia [2,3,4]. Moreover, 44% of coal mines in China are high gas and outburst mines and prone to coal and gas outburst accidents during coal extraction [5]. Therefore, to effectively extract coalbed methane and ensure mining safety, effective measures must be taken to improve the coal seam permeability and control the risk of gas disasters.
In coal seams, high-pressure water jet slotting is an effective method of improving the coal seam permeability [6,7,8,9]. As shown in Figure 1, this technology can form a disc slot in the coal seam by using a high-pressure water jet, which effectively increases the area of exposed coal. Additionally, the pressure in the coal seam surrounding the slot is fully relieved, which results in the deformation of coal and the formation of cracks. This increases the gas flow channels and improves the flow conditions, which in turn accelerate the gas desorption and discharge, to result in permeability improvement [10,11]. Therefore, it can be seen that the slotting depth directly affects the pressure relief range and determines the gas drainage effect. Many studies have investigated water jet slotting. However, most existing studies have focused on improving the permeability mechanism [12,13,14] and rock-breaking capability of the water jet [15], optimizing and improving the slotting system [16,17], and so on. A few studies have investigated the effects of hydraulic parameters and operational parameters on the slotting depth, but there is no applicable theoretical model for determining the slotting depth in water jet slotting applications. This leads to the operational parameters and borehole layout being unknown when applying high-pressure water jet slotting technology.
This study investigated the effects of hydraulic parameters (nozzle diameter and jet pressure) and operational parameters (rotation speed and slotting time) on the slotting depth. Based on the rock-cutting model of a water jet, a model for calculating the water jet slotting depth was established. Water jet slotting experiments were conducted under different operational conditions to verify the calculation model. Additionally, water jet slotting field tests were conducted, and the slotting depths were investigated. The results of this study can be useful as guidelines for selecting the hydraulic parameters of water jet slotting and optimizing the layout of coal gas drainage boreholes in coal seams.

2. Theory of Rock-Breaking for a High-Pressure Water Jet

Cutting rock with a high-pressure water jet is a complicated process, and involves many factors, such as the nozzle diameter, jet pressure, translation speed, standoff distance, cutting times, rock properties, and so on. In recent decades, several classic rock-cutting models have been established and mainly include the Crow cutting model, Rehbinder cutting model, and Hashish cutting model. However, various parameters, such as the rock particle diameter, jet action time, jet dynamic viscosity, rock permeability, and so on, are required in the Rehbinder cutting model [24,25]. Moreover, in the Hashish cutting model, the compressive yield limit, hydrodynamic friction coefficient, and damping coefficient of cutting materials must be calculated or measured in advance [26]. Therefore, the Rehbinder and Hashish models can only be applied to laboratory experiments or theoretical analysis, but cannot be effectively used to analyze the water jet slotting in field applications. In contrast, the Crow model is much simpler to a certain extent, and the required parameters can be obtained more easily. Therefore, it is more suitable for high-pressure water jet slotting field applications.
Based on numerous rock-cutting experiments, Crow proposed the general law of hydraulic rock cutting. The cutting depth can be calculated as follows: where h is the cutting depth; J is the translation time; P and Pc are the jet pressure and critical rock-breaking pressure of the water jet, respectively; τ0 is the shear strength of the rock; d0 is the nozzle diameter; v is the translation speed; and ce is the theoretical translation speed. As can be seen, the key water jet cutting parameters are considered in the Crow model. However, for water jet slotting in a coal seam, the existing Crow model is not fully applicable, owing to the difference of rock properties and working conditions, and requires further modification.

The relationship between the jet pressure and the jet velocity is expressed by Equation (7). As can be seen, the jet pressure determines the jet velocity and impact energy, and thus affects the slotting depth. To obtain the effect of jet pressure on the slotting depth, water jet cutting experiments were conducted with different jet pressures. where P is the jet velocity and φ is the nozzle velocity coefficient.
The cutting experiment was conducted on an independently designed and developed water jet test system in the Laboratory of High-pressure Water Jets at Chongqing University, China. The system mainly consisted of a high-pressure pump, pressure and flow control system, and water jet test platform, as shown in Figure 3. The high-pressure pump, manufactured by Nanjing Luhe Coal Mine Machinery Co., Ltd., had a rated pressure of 56 MPa and rated flow rate of 200 L/min. The pressure-flow control system consisted of a pressure sensor of 0–70 MPa with a precision of ±0.1% and an ultrasonic flowmeter of 0.5–20 m/s ± 1%. Additionally, it was convenient to adjust the system pressure and monitor and record the pressure and flow at different times. The water jet test platform was comprised of a translation console and rock bearing system. The translation console had a translational speed of 0.01–1 m/s, and the rock bearing system, with an ultimate bearing weight of 5 t, could move up, down, forward, and backward. Moreover, the nozzle diameter and standoff distance were 3 and 165 mm, respectively. The translation speed was set to a constant of 0.12 m/s. Although it was very difficult to obtain coal blocks with large sizes, the coal block easily split when impacted by the water jet, owing to the typical anisotropy and abundant joints and fissures in the coal. This made it difficult to quantitatively evaluate the jet cutting efficiency. Besides, shaped coal of certain proportions has similar physical and mechanical properties, such as the compressive strength, tensile strength, and Poisson’s ratio, of raw coal. It can well reflect the internal relationship between water jet parameters and rock-breaking efficiency of coal in the experiment [29,30]. Therefore, shaped coals of size 200 × 200 × 200 mm were used as the cutting targets because they were adequately similar to coal; the f coefficient was 0.69.
The cutting experiment results are presented in Figure 4. And the relationship between the jet pressure and the cutting depth can be obtained as shown in Figure 5. When the jet pressure was low, the cutting depth was shallow and approximately equal to zero because the jet pressure was lower than the critical rock-breaking pressure of the water jet. As the jet pressure increased, the cutting depth gradually increased, and the sample was completely cut through at a jet pressure of 22 MPa. As can be seen from the fitting curve, the cutting depth linearly increased with the jet pressure. Therefore, the relationship between the jet pressure and the cutting depth can be expressed as follows: where hP is the cutting depth under different jet pressures; k1 is the proportionality coefficient; and P and Pc are the jet pressure and critical rock-breaking pressure, respectively. The critical rock-breaking pressure could show the effect of the coal strength on slotting depth to a certain extent.

It is known that the slotting depth is more than 1 m when the jet pressure reaches 25 MPa. Therefore, the model for calculating the slotting depth cannot be verified by laboratory experiments when the jet pressure is high. Field tests were carried out to further investigate whether the model could be used in field applications. The high-pressure water jet slotting system was similar to the laboratory slotting experiments. The field test site was the Shoushan Number 1 coal mine affiliated with Pingdingshan Coal Group Co. Ltd., as shown in Figure 13. The field test for the slotting depth investigation was conducted at the Number 15-12050 wind lane. The slotting target coal seam was the Number 15 coal seam, and the hardness coefficient f was 0.13–0.5, which belongs to a soft and crushed coal seam. The tensile strength was 0.2–0.3 MPa.

This study investigated the effects of the nozzle diameter, jet pressure, rotation speed, and slotting time on the cutting depth. A model for calculating a slotting depth suitable for field application was established, and optimized slotting parameters were obtained. Based on water jet slotting field tests, the proposed calculation model was verified. The following conclusions were drawn from this study:

(1)
The attenuation coefficient of the jet axial dynamic pressure first decreased and then increased with the increase of the nozzle diameter. For a much higher jet impact velocity, there existed an optimal nozzle diameter. Additionally, the cutting depth linearly increased with the jet pressure and decreased as a power function with the increase of the jet translation speed. Moreover, the number of cuttings had a significant impact on the cutting depth, and the several previous cuttings played a major role in the jet cutting. With the further increase of cutting times, the cutting depth slowly increased, but the increment was small.
(2)
Water jet slotting experiments were conducted with different rotation speeds and slotting times. The results revealed that the slotting depth increased with the slotting time, but the growth rate gradually decreased and tended to be stable. As the rotation speed increased, the slotting depth became greater at the initial period, and the limit depth was reached faster. At the early slotting stages, more slotting repetitions were helpful in increasing the slotting depth. At the later slotting stages, a longer single impact improved the slotting efficiency.
(3)
A model for calculating the water jet slotting depth was established according to the effects of key parameters on the cutting depth. This model was subsequently verified using the rotatory slotting experiment data, and the results revealed that the fitting was good. Based on the proposed model, the slotting depths under different jet pressures and the threshold rock-breaking pressures were calculated.
(4)
Water jet slotting field tests were carried out. The slotting depths at different rotation speeds with different slotting times were analyzed. Comparisons with the depths predicted by the calculation model were made, which revealed that the differences are acceptable.

J.Z., Y.W., Z.G., and S.X. contributed to conceiving and designing the experiments, analyzing the data, and writing the paper. H.Z. and X.H. performed the experiments.

We thank Liwen Bianji, Edanz Editing China (www.liwenbianji.cn/ac), for editing the English text of a draft of this manuscript. 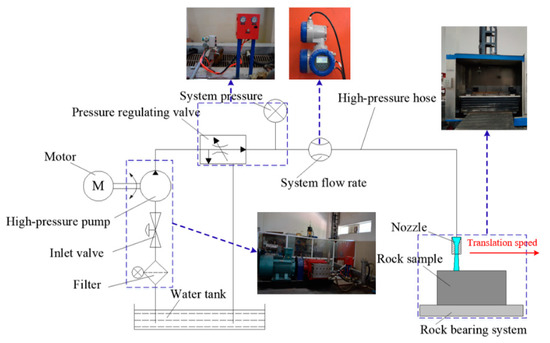 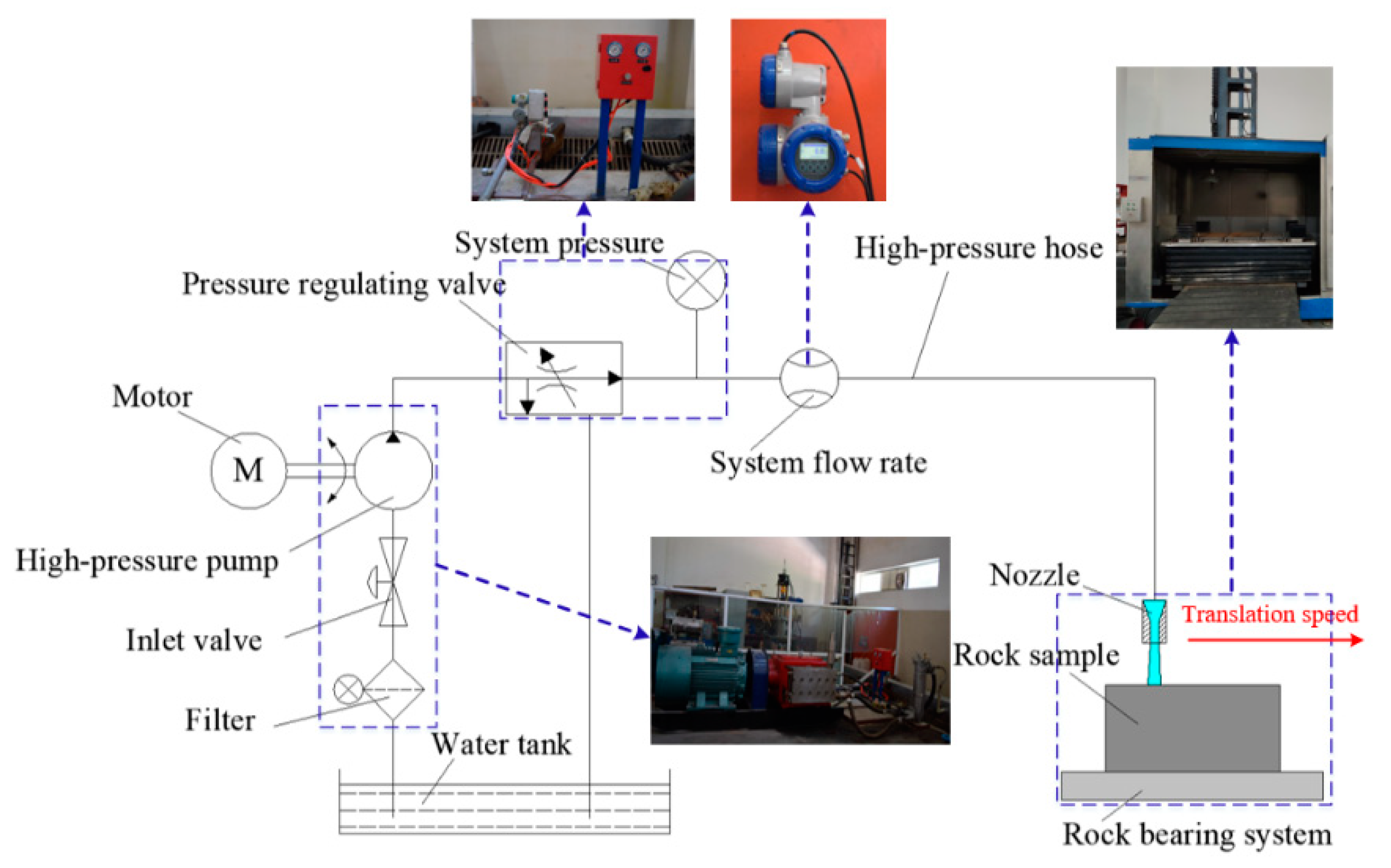 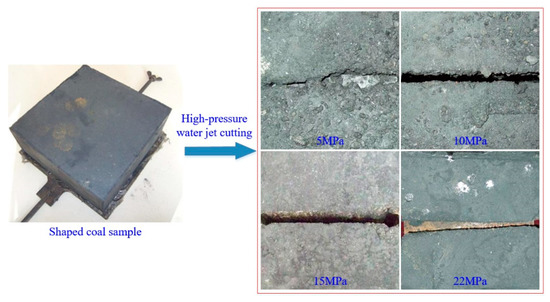 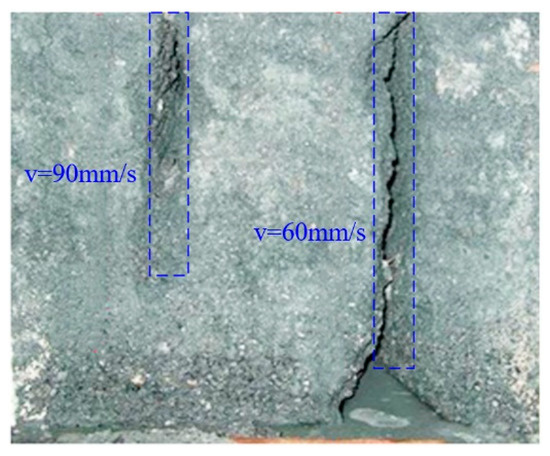 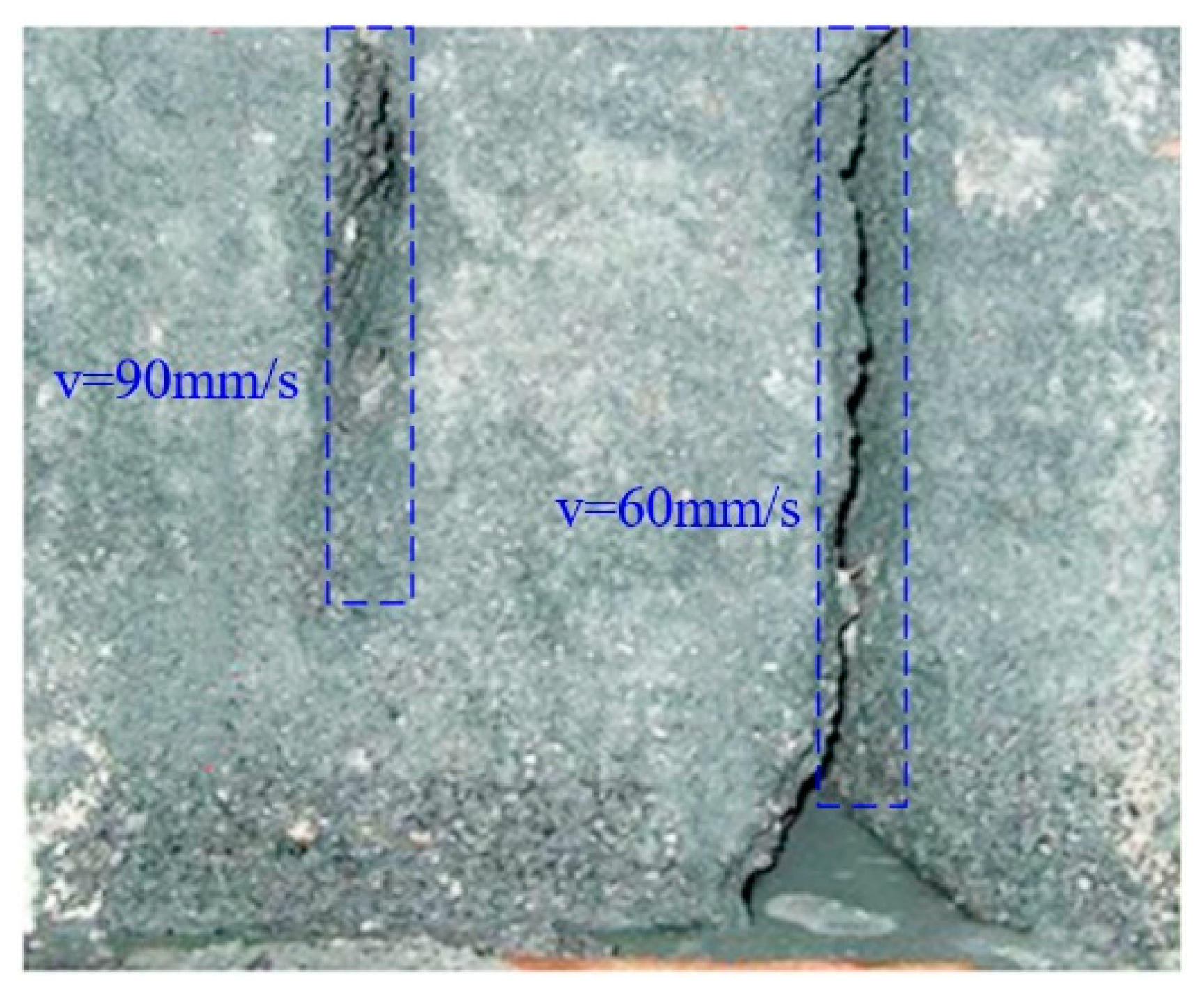 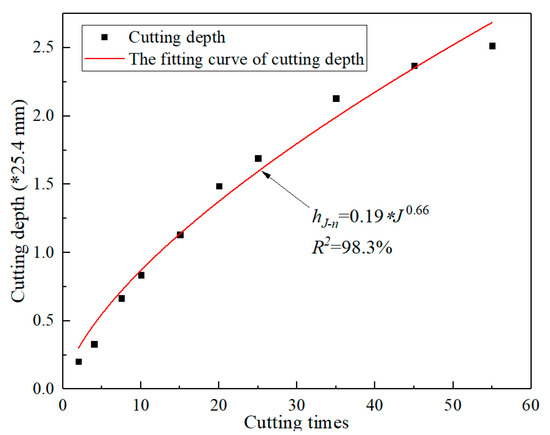 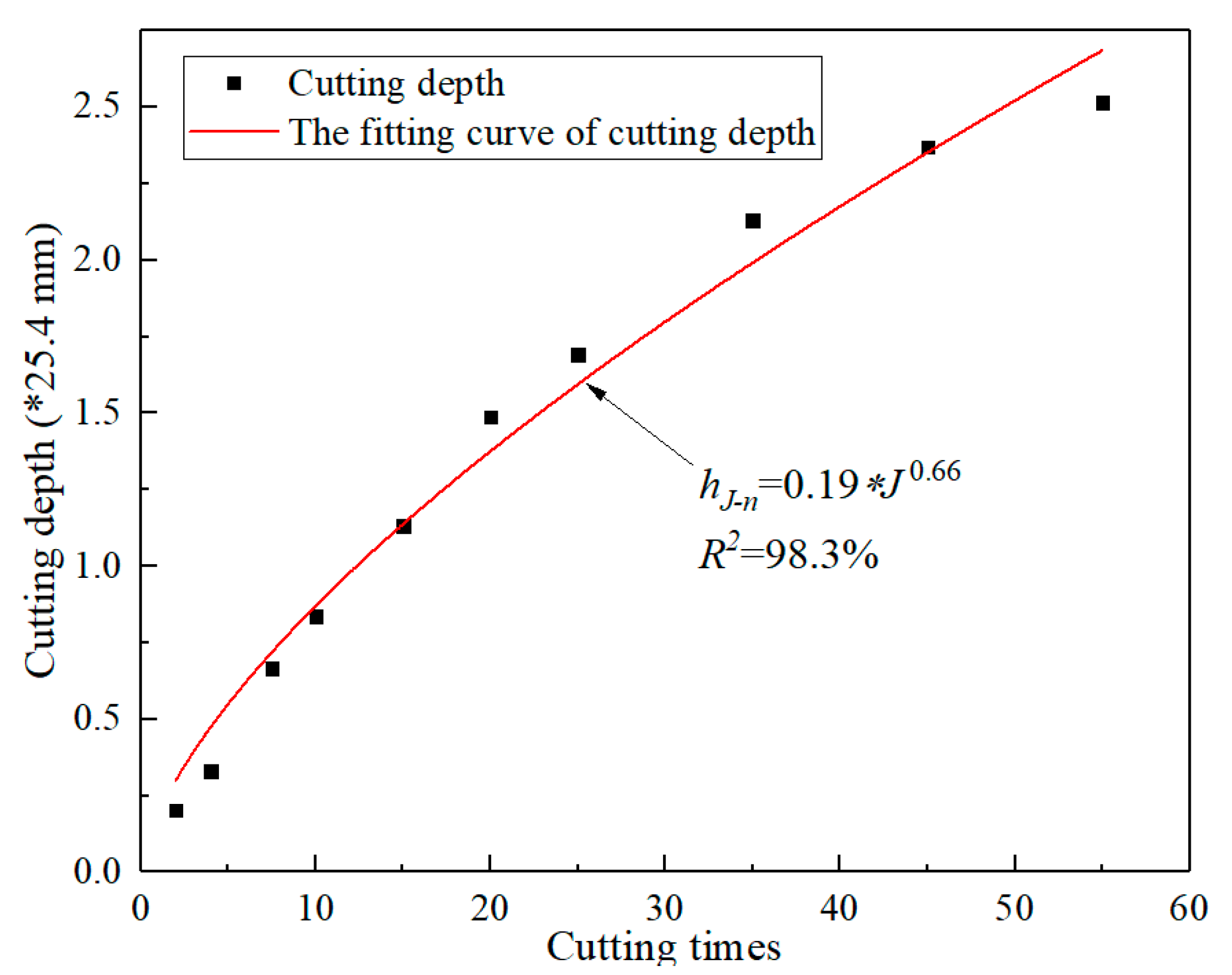 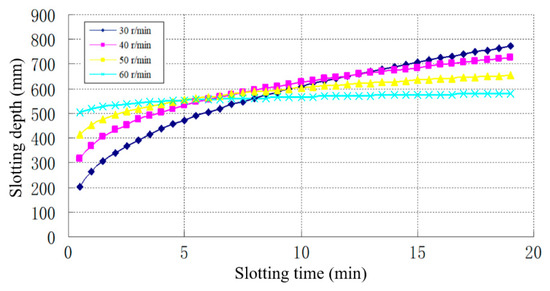 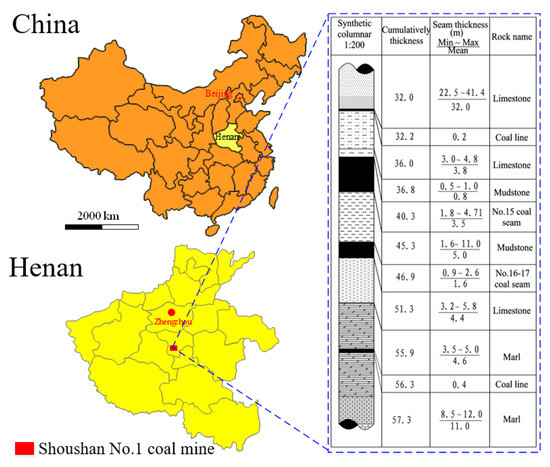 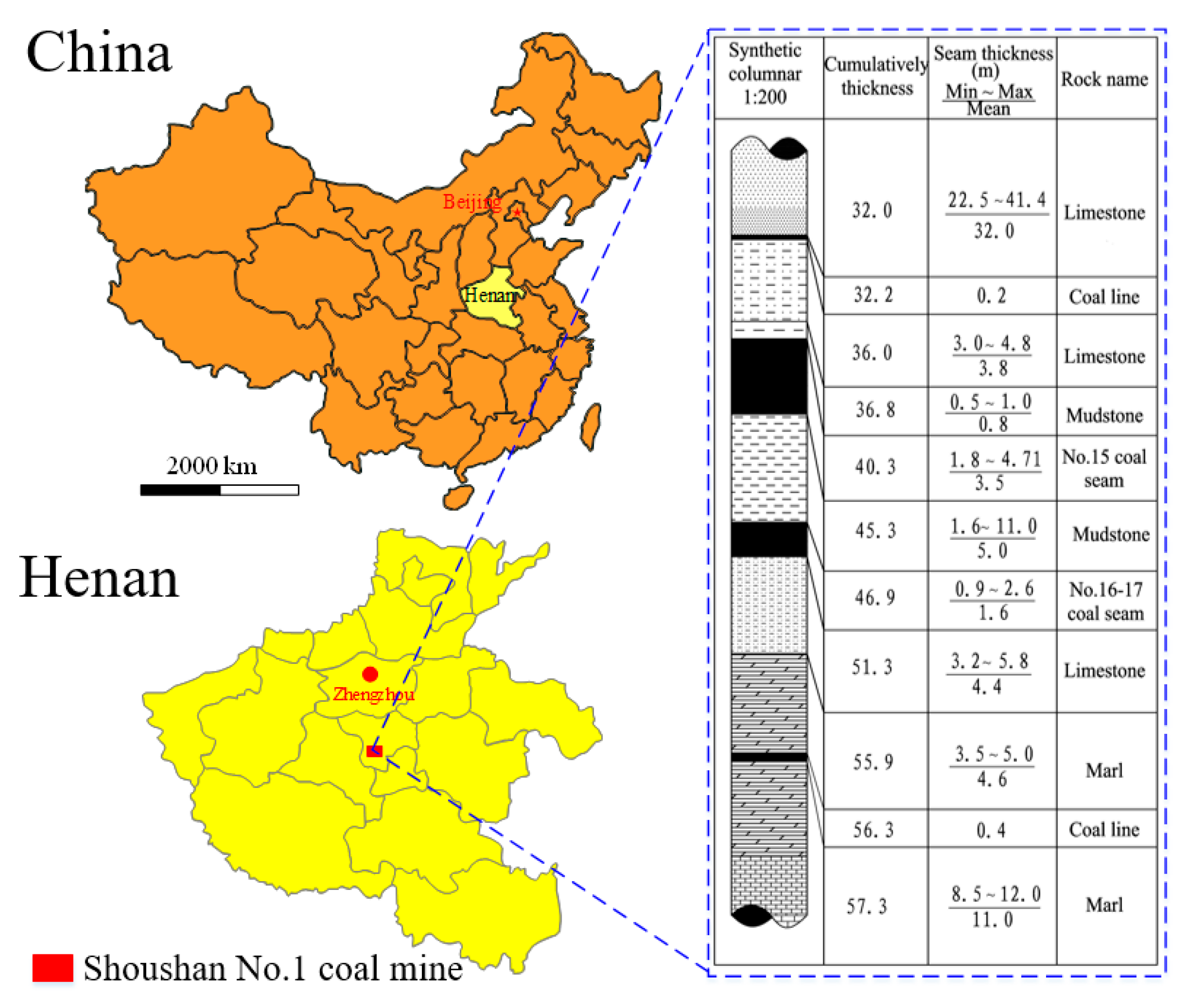