Pectin was first dissolved in distilled water and blended with low contents of polyethylene oxide 2000 (PEO2000) as the carrier polymer to produce electrospun fibers. The electrospinning of the water solution of pectin at 9.5 wt% containing 0.5 wt% PEO2000 was selected as it successfully resulted in continuous and non-defected ultrathin fibers with the highest pectin content. However, annealing of the resultant pectin-based fibers, tested at different conditions, developed films with low mechanical integrity, high porosity, and also dark color due to their poor thermal stability. Then, to improve the film-forming process of the electrospun mats, two plasticizers, namely glycerol and polyethylene glycol 900 (PEG900), were added to the selected pectin solution in the 2–3 wt% range. The optimal annealing conditions were found at 150 °C with a pressure of 12 kN load for 1 min when applied to the electrospun pectin mats containing 5 wt% PEO2000 and 30 wt% glycerol and washed previously with dichloromethane. This process led to completely homogenous films with low porosity and high transparency due to a phenomenon of fibers coalescence. Finally, the selected electrospun pectin-based film was applied as an interlayer between two external layers of poly(3-hydroxybutyrate-co-3-hydroxyvalerate) (PHBV) by the electrospinning coating technology and the whole structure was annealed to produce a fully bio-based and biodegradable multilayer film with enhanced barrier performance to water vapor and limonene. View Full-Text
Keywords: pectin; electrospinning; annealing; barrier interlayers; food packaging pectin; electrospinning; annealing; barrier interlayers; food packaging
►▼ Show Figures 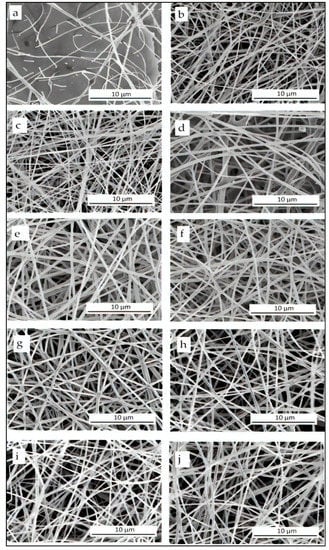