This paper presents a thermo-economic analysis of a simple organic Rankine cycle (SORC) as a waste heat recovery (WHR) systems of a 2 MW stationary gas engine evaluating different working fluids. Initially, a systematic methodology was implemented to select three organic fluids according to environmental and safety criteria, as well as critical system operational conditions. Then, thermodynamic, exergy, and exergo-economic models of the system were developed under certain defined considerations, and a set of parametric studies are presented considering key variables of the system such as pump efficiency, turbine efficiency, pinch point condenser, and evaporator. The results show the influence of these variables on the combined power of the system (gas engine plus ORC), ORC exergetic efficiency, specific fuel consumption (∆BSFC), and exergo indicators such as the payback period (PBP), levelized cost of energy (LCOE), and the specific investment cost (SIC). The results revealed that heat transfer equipment had the highest exergy destruction cost rates representing 81.25% of the total system cost. On the other hand, sensitivity analyses showed that acetone presented better energetic and exergetic performance when the efficiency of the turbine, evaporator, and condenser pinch point was increased. However, toluene was the fluid with the best results when pump efficiency was increased. In terms of the cost of exergy destroyed by equipment, the results revealed that acetone was the working fluid that positively impacted cost reduction when pump efficiency was improved; and toluene, when turbine efficiency was increased. Finally, the evaporator and condenser pinch point increased all the economic indicators of the system. In this sense, the working fluid with the best performance in economic terms was acetone, when the efficiency of the turbine, pinch condenser, and pinch evaporator was enhanced. View Full-Text
Keywords: energy analysis; exergy analysis; organic Rankine cycle; waste heat recovery; natural gas engine energy analysis; exergy analysis; organic Rankine cycle; waste heat recovery; natural gas engine
►▼ Show Figures 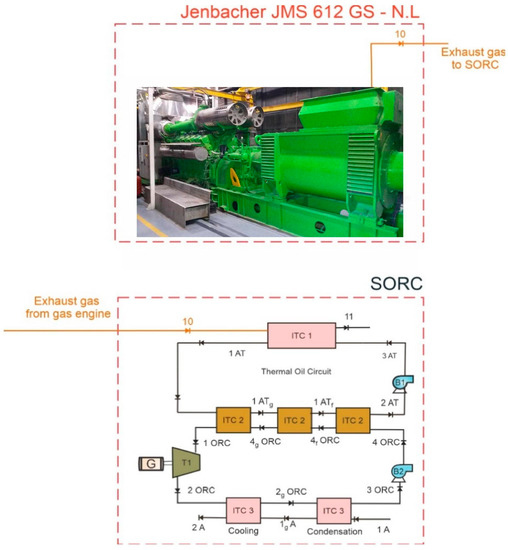