The transcription factor p53 is a stress sensor that turns specific sets of genes on to allow the cell to respond to the stress depending on its severity and type. p53 is classified as tumor suppressor because its function is to maintain genome integrity promoting cell cycle arrest, apoptosis, or senescence to avoid proliferation of cells with damaged DNA. While in many human cancers the p53 gene is itself mutated, there are some in which the dysfunction of the p53 pathway is caused by the overexpression of negative regulators of p53, such as Mdm2, that keep it at low levels at all times. Here we develop an optogenetic approach to control endogenous p53 levels with blue light. Specifically, we control the nuclear localization of the Mmd2-binding PMI peptide using the light-inducible export system LEXY. In the dark, the PMI-LEXY fusion is nuclear and binds to Mdm2, consenting to p53 to accumulate and transcribe the target gene p21. Blue light exposure leads to the export of the PMI-LEXY fusion into the cytosol, thereby Mdm2 is able to degrade p53 as in the absence of the peptide. This approach may be useful to study the effect of localized p53 activation within a tissue or organ. View Full-Text
Keywords: Optogenetics; p53; AsLOV2; LINuS; LEXY; MIP; PMI Optogenetics; p53; AsLOV2; LINuS; LEXY; MIP; PMI
►▼ Show Figures 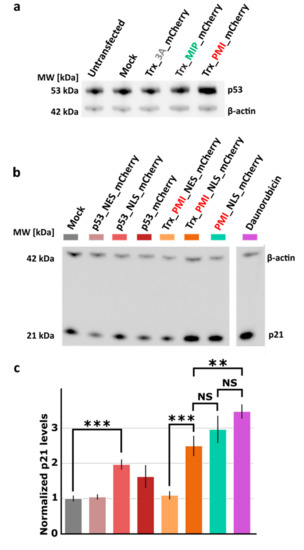