Ground Subsidence Investigation in Fuoshan, China, Based on SBAS-InSAR Technology with TerraSAR-X Images

The paper presents the test experiment to investigate one of UNESCO’s (United Nations Educational, Scientific and Cultural Organization) world heritage objects, an archaeological site in the Naryn-Kala citadel (Derbent, Republic of Dagestan, Russian Federation) hidden under the ground’s surface. The function of the site could be revealed by the muon radiography studies. Several nuclear emulsion detectors were exposed for two months inside the site at a depth about 10 m from the modern surface. The use of nuclear emulsions as probing radiation detectors combined with the potential of modern image analysis methods provides for a uniquely high resolution capacity of recording instrumentation and 3D reconstruction of the internal structure of the investigated object. Here we present the experiment and data analysis details and the first results.
Keywords: muon radiography; archaeology; emulsion detectors; image reconstruction muon radiography; archaeology; emulsion detectors; image reconstruction

Remote sensing methods are often the only way to investigate specific archaeological sites (e.g., Reference [1]). One of them is the muon radiography method for probing sizable solids and constructions, based on the analysis of absorption and scattering of cosmic muon fluxes on their way through the substance of the investigated object.
The first experiment investigating an archaeological site with the help of muons of cosmic origin was the study of the Pyramid of Khafre in Egypt by the group of the Nobel prize winner L. Alvarez [2,3]. Recently, a successful attempt to study another archaeological object, the Khufu pyramid, was undertaken by an international team of scientists from Japan, France and Egypt in 2016–2017 within the framework of the ScanPyramids project [4]. The result of the studies performed with emulsion track detectors was the discovery of a new unknown chamber, which is the first great breakthrough in the Cheops pyramid investigation since the XIXth century, without any damage to the construction. This sensational result, confirmed by the electronic instrumentation, demonstrated the success of the muon radiography method based on emulsion detectors in the study of archaeological objects.
Our experiment was carried out in spring 2018 by collaborators from the National University of Science and Technology Moscow Institute of Steel and Alloys, “MISiS”, Lebedev Physical Institute of RAS, Skobeltsyn Institute of Nuclear Physics of Moscow State University; Institute of History, Archaeology and Ethnography of Dagestan Scientific Centre of RAS, and Dagestan State University, with the participation of the Agency for the Protection of Cultural Heritage of the Republic of Dagestan. The aim was to clarify the possibility of investigating the selected archaeological site by using the muon radiography method, to determine the optimal exposure, number, size and arrangement of the detectors employed and to obtain the first images of the object by nuclear emulsions.
The object of study was an underground cross-shaped dome construction oriented to the cardinal directions, located in the citadel of Naryn-Kala in ancient Derbent. The construction built from local shell-limestone is about 11 meters high and extends for 14.8 m from south to north and 13.4 m from west to east (Figure 1). The segments (arms) of the cross-shaped construction are about 4.7 m wide, three arms are about 4.2 m long, and the fourth (northern) one is over 6 m long. The arms are covered with ogival vaults, and above the central part a wire frame of the dome 5 m in diameter is located.
In some historical and reference literature this construction is mentioned as an underground reservoir for water, as it was in XVII–XVIII centuries (see, e.g., Reference [5]). At the same time, it was suggested that this construction was originally an early Christian church established during V–VI A.D, [6,7] or a Zoroastrian temple of fire [8]. The construction is almost completely hidden by a cultural layer; on the modern surface, only a fragment of the half ruined dome and the back end of the northern section (arm) with a window are seen (Figure 1). Specialists emphasize the need to study this structure by using non-invasive methods (without destruction of the cultural layer) [9]. Its investigation by traditional methods, such as archaeological excavations, is rather problematic, as nobody knows how the walls of the building exposed to the long-time action of water would behave when released from the ground. Moreover, massive diggings would disturb the existing historical landscape of the citadel and reveal the adjacent architectural complexes of various medieval periods, requiring preservation and conservation. Under such conditions, the method of muon radiography seems to be the only possible approach to study this architectural and archaeological site. The presence of voids, or dense areas in the walls and adjacent soil discovered by this method can confirm one of the hypotheses of its function.

High-energy muons generated in the Earth atmosphere by the cosmic ray particles have a very high penetrability, making them unique agents for probing sizable objects under the earth and on its surface (geological deposits, volcanoes, caves, nuclear reactors, archaeological objects etc.). Even at comparatively limited energy, a muon can pass through the entire atmosphere and penetrate deep into the earth’s crust: cosmic muons with energies of Eµ ~ 1–10 TeV were registered in underground laboratories at depths of about 2 km [10]. As a result, since the spectrum of atmospheric muons of cosmic origin extends to hundreds of TeV and above, muon fluxes have in their composition high-energy particles that can pass through kilometer-thick objects of high density.
The physical principle of muon radiography is based on two phenomena, the first of which is the attenuation of the muon flux in the absorber owing to electromagnetic processes (ionization, bremsstrahlung radiation, generation of electron–positron pairs). When a substance of another density occurs during a charged particle flux, the intensity of electromagnetic interactions changes and affects the intensity of muon flux absorption in this zone. The other phenomenon is conditioned by multiple Coulomb scattering, when with the increase of the absorber atomic number, the extent of particle scattering increases to lead to a noticeable deviation of the particle trajectory angle from the initial one.
Currently, in experiments conducted using the method of muon radiography, both electronic and emulsion track detectors are used. Emulsion detectors [11,12] have a number of advantages, with the main one being a high angular resolution. Of all the muon radiography detectors, the emulsion ones have the best angular resolution. None of the currently known detectors of elementary particles provide a spatial resolution in the way that the nuclear emulsion does: with a grain size of 0.3–1 micron, the grain deviation from the restored trajectory of the particle does not exceed the average value of 0.8 microns, and under certain conditions can reach 0.2 microns. When using natural probing radiation, that is the flux of atmospheric muons, the detector is placed on a side or below the studied object (the so-called one-sided muon radiography [13]). The number of muons passing through the object depends on material of the object under study and the length of the muon path within it. Muons with a range in the substance greater than their path lengths in the tested object reach the detector. The registered particle tracks, which are chains of developed grains of silver halides ionized by a passing charged particle, allow restoring the spatial trajectory of this particle with accuracy of several milliradians (which means a spatial resolution about 10 m at the distance of 1 km). Each registered muon is characterized by the values of azimuth and zenith angles of its trajectory relative to the axis normal to the detector plane. The angular distributions of muon tracks registered by the detector aimed at the object indicate absorption and scattering features of these probing particles and, therefore, the presence in this area of zones with different material properties. The use of several detectors enables obtaining a 3D tomogram of the internal structure of the object under study. Detailed review of the method and its potential are given in Reference [14].
Preliminary analysis carried out on topographical maps has shown that muon radiography detectors can be arranged inside the object so that to scan it completely (Figure 2). Registration of muons in solid angles indicated in Figure 2 was carried out by track detectors, made of layers of double-sided nuclear emulsion films of 10 × 12.5 cm2 [15,16]. In total, five emulsion detectors were used in this experiment: four wall-oriented detectors, and one directed upwards to measure the vertical muon flux. Figure 3 shows one of the nuclear emulsion detectors mounted inside the object.

The main goal of the presented work is to solve the problem of the historical status of the underground cross-shaped dome structure located in the north-western part of the Naryn-Kala citadel in Derbent using the contemporary geophysical method of muon radiography. This citadel is included in the UNESCO World Heritage List. According to the first results of the test experiment, we can draw the main conclusion about the applicability of the muon radiography method to the study of the structure of the object and the density of the forming materials. The detection of peculiarities in the resulting distribution of probing radiation is evidence of the need for subsequent exposures of emulsion detectors in the studied structure area, in view of the specifics of the object. In particular, it is preferable to install detectors on the western slope of the fortress outside the walls of the building to obtain its full-scale image underground. The major result of the continuation of the experiment will become a 3D tomogram of the underground cross-shaped dome structure in the Naryn-Kala citadel, which will help to solve the problem of the function of this unusual structure, to analyze its condition and to develop recommendations for the plan of possible excavations. 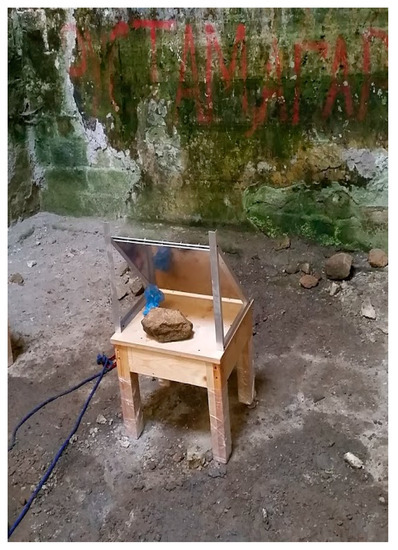 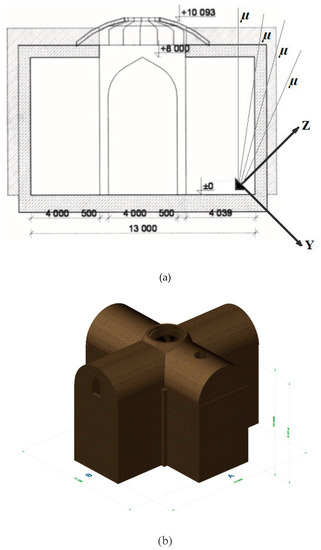 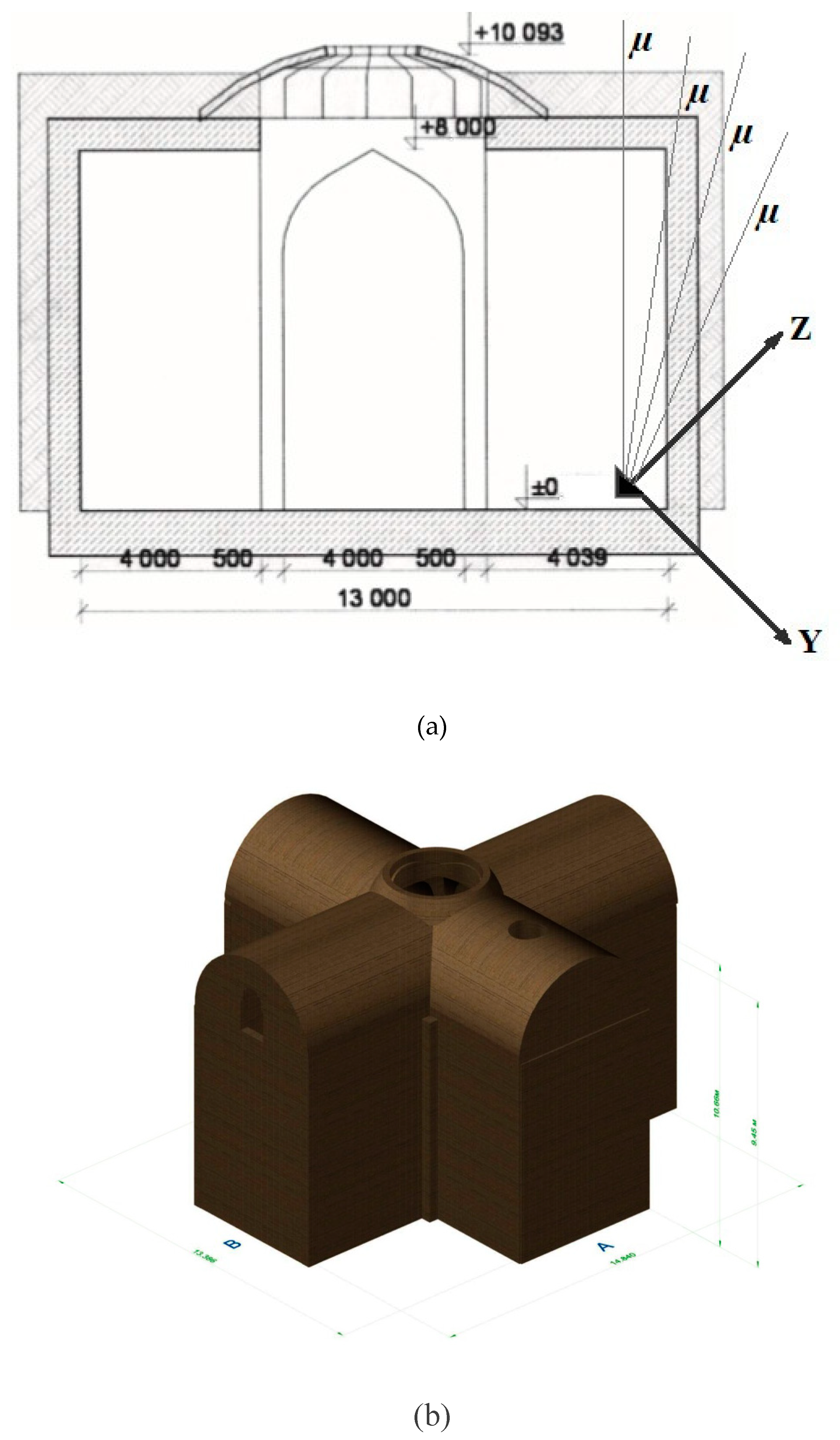 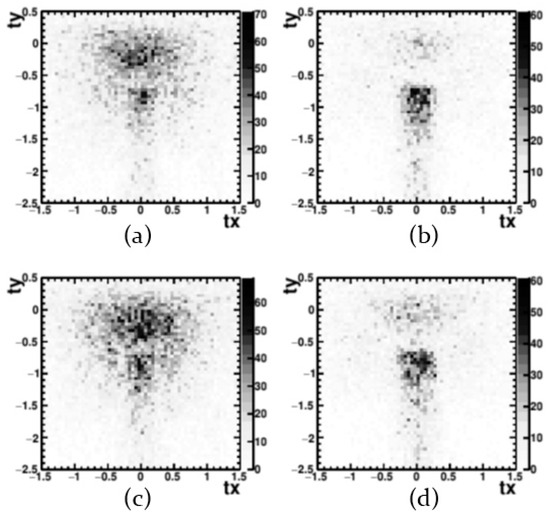 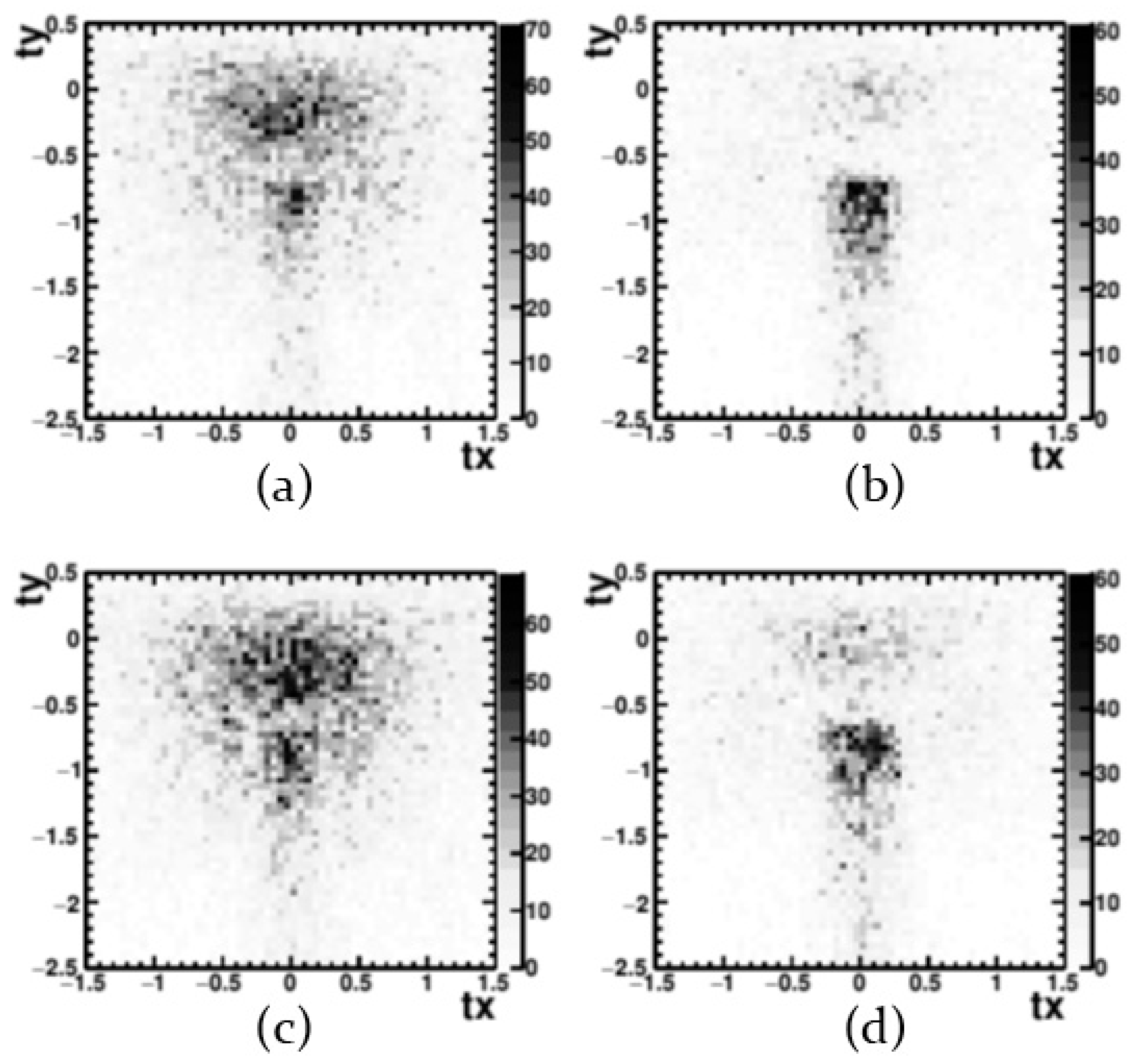 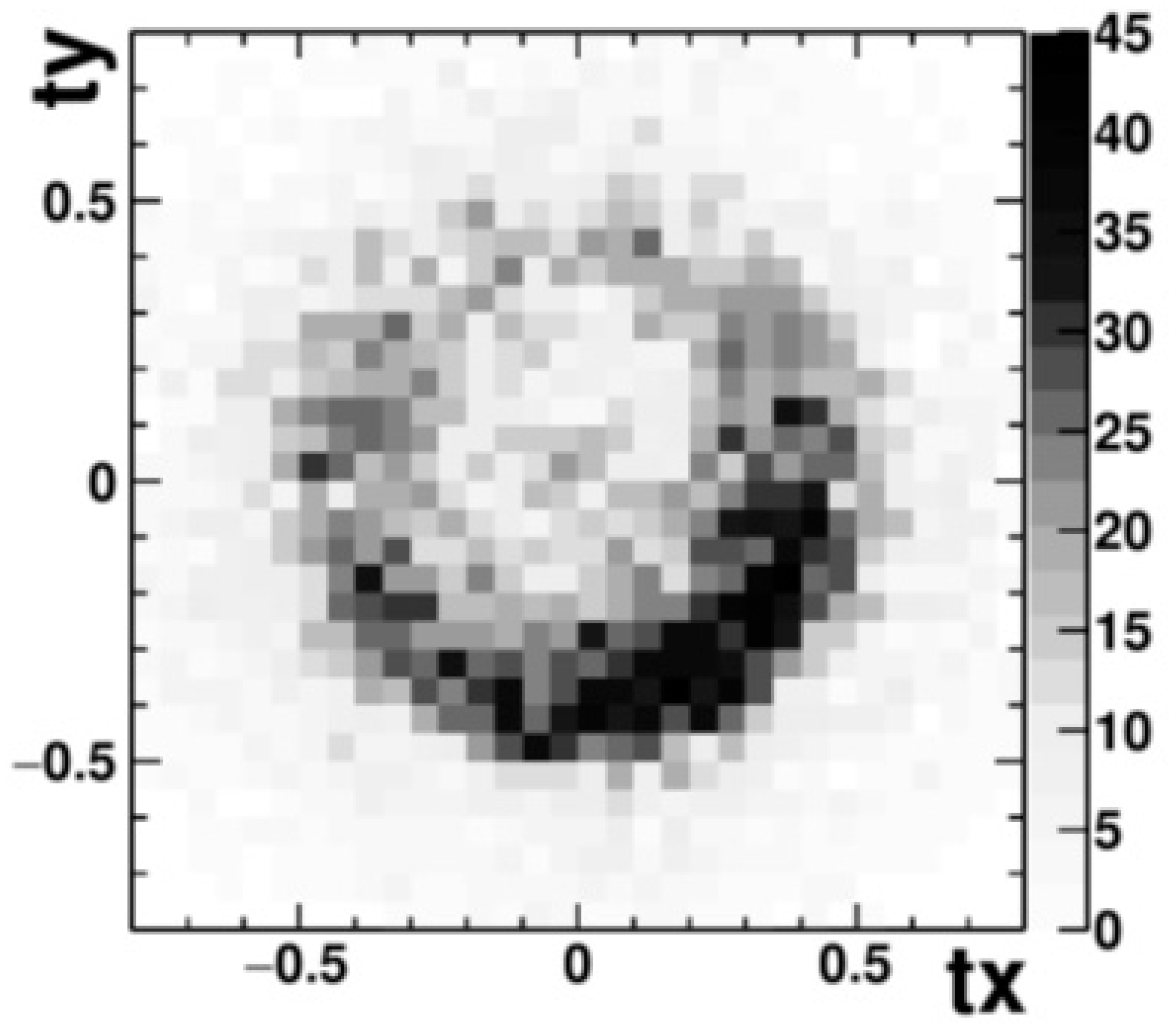