Active Color Control in a Metasurface by Polarization Rotation

In this paper, we show that light-diffusing fibers (LDF) can be efficiently used as host material for surface plasmon resonance (SPR)-based refractive index sensing. This novel platform does not require a chemical procedure to remove the cladding or enhance the evanescent field, which is expected to give better reproducibility of the sensing interface. The SPR sensor has been realized by first removing the cladding with a simple mechanical stripper, and then covering the unclad fiber surface with a thin gold film. The tests have been carried out using water–glycerin mixtures with refractive indices ranging from 1.332 to 1.394. The experimental results reveal a high sensitivity of the SPR wavelength to the outer medium’s refractive index, with values ranging from ~1500 to ~4000 nm/RIU in the analyzed range. The results suggest that the proposed optical fiber sensor platform could be used in biochemical applications.
Keywords: light-diffusing fibers (LDF); surface plasmon resonance (SPR); optical sensors light-diffusing fibers (LDF); surface plasmon resonance (SPR); optical sensors

Refractive index (RI) sensing is important for biological and chemical applications since a number of substances can be detected through measurements of the refractive index. Among RI sensors, those based on surface plasmon resonance (SPR) are especially useful as they permit label-free and real-time detection of biological/biochemical binding reactions [1,2,3]. In particular, fiber-optic SPR probes have the advantages of remote sensing, continuous analysis, and in situ monitoring. Fiber-optic SPR sensors meet the demands of time- and space-saving, low sample volume, low cost, high sensitivity, portability, and miniaturization. Therefore, these biosensors have recently been extensively investigated [4,5,6]. Numerous versions have been introduced, exploiting several kinds of optical fibers and/or different manufacture procedures, in an attempt to optimize the sensitivity of the plasmonic sensor platforms [7,8,9,10,11,12,13,14].
In general, the excitation of a surface plasma wave at the boundary between a thin metal film and the surrounding medium requires access to the evanescent part of propagating light [13]. In single-mode fibers, this requires a chemical etching of the cladding, which increases the cost of manufacturing and impacts on the robustness of the sensor. In multimode fibers with polymeric cladding (the so-called hard-clad fibers), the cladding may be more simply removed by mechanical tools. However, the multimode SPR sensor exhibits a strong dependence of its response on the angle of incidence of the input light [7,12].
Herein we demonstrate a novel fiber-optic SPR sensor using a light diffusing fiber (LDF) as the host element. LDFs are designed with light-scattering centers in the core, providing very efficient scattering of light through the sides of the optical fiber and along their entire length. Therefore, the SPR response of an LDF is virtually independent of the angle of incidence of excitation light. Note that an SPR platform based on a plastic LDF has been recently demonstrated [14]. However, as seen in Reference [14], a polishing procedure was still adopted in order to remove the cladding and produce a side-polished surface.
In the following, we first characterize, numerically and experimentally, the LDF in terms of transmission loss as a function of the surrounding refractive index (SRI). Through this analysis, we estimate that the optical energy within the fiber core is completely scrambled over all the possible angles. Successively, we present the results of an SPR sensor, realized by depositing a thin gold film around the unclad region. The experimental results are finally compared to those found in the literature for a hard-clad silica (HCS) fiber.

2. SPR Sensor Based on an LDF

The LDF chosen as the host platform (Fibrance® by Corning®, New York, NY, USA) is composed of a silica core with a diameter of , and a low-index polymeric cladding with a diameter of [15] (see Figure 1a). In the chosen LDF, the guided light is scattered radially outward through a plurality of helical voids randomly distributed in the core, and wrapped around the long axis of the optical fiber (see Figure 1b). The pitch of the helical voids controls the amount of the side-emitted light, with smaller pitches scattering more light than larger pitches, while their diameter ranges in size from 50–500 nm; consequently, they scatter the propagating light almost independently of the wavelength of light used [15].
For our tests, a 2 cm length of the fiber was unclad by means of a Miller stripping tool. In the first experimental configuration, one end of the fiber was coupled to the white light emitted by a tungsten halogen light source (HL2000, Ocean Optics), while the transmitted light was collected through a spectrophotometer with a detection range from 350 to 1023 nm (FLAME-S-VIS-NIR-ES, Ocean Optics). The outline of this sensor system (intensity-based LDF sensor) is shown in Figure 2a.
The SPR sensor was then obtained by depositing, through sputter coating (Bal-Tec SCD 500), a thin gold film over the same unclad portion of the LDF. Gold was chosen due to its high stability and ease of functionalization for biosensing applications. The sputtering process was repeated twice, upon rotating the fiber by 180°, in order to metalize the whole fiber circumference. The so-obtained gold film had a nominal thickness of 60 nm, and presented a good adhesion to the substrate, tested by its resistance to rinsing in de-ionized water. As shown in Figure 2b, the changes in the transmission spectrum induced by changes of the SRI have been recorded by using the same equipment previously described (halogen lamp and spectrometer).

An LDF has been proposed as host material for SPR-based refractive index sensing. The realized SPR sensor shows a high sensitivity to the external refractive index (about 4000 nm/RIU for an SRI of 1.394). A tentative model has been developed in terms of power distribution within the fiber, which has been shown to accurately describe the changes of transmitted power along an unclad LDF. The proposed sensor does not require any specific processing of the fiber, apart from a metallization of the probe region, and exhibits a better sensitivity than similar SPR sensors based on a multimode optical fiber. In contrast, the SNR is lower than the HCS fiber, and much lower than single-mode fiber SPR sensors. However, we believe that the observed SNR is still sufficient to allow biochemical applications as demonstrated in the literature with other multimode SPR configurations. The sensor is easily repeatable, disposable, free of labeling, and has a potential for real-time detection, so it is ideally suited for biochemical sensing and environmental monitoring.

N.C., L.Z. and A.M. conceived, designed and realized the SPR sensor device. All the authors realized the experimental measurements, analyzed the results and contributed to the writing of paper. 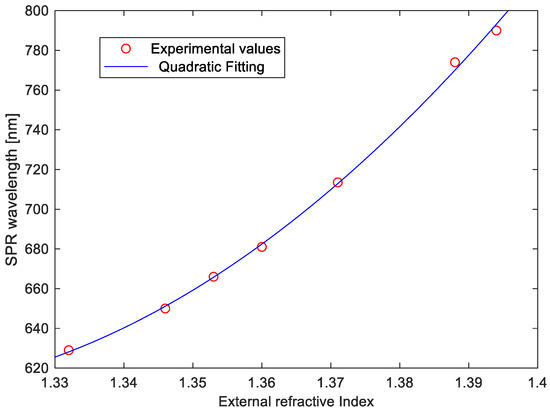