Special Feature on Bio-Inspired Robotics
Next Article in Special Issue

Many challenges in today’s society can be tackled by distributed open systems. This is particularly true for domains that are commonly perceived under the umbrella of smart cities, such as intelligent transportation, smart energy grids, or participative governance. When designing computer applications for these domains, it is necessary to account for the fact that the elements of such systems, often called software agents, are usually made by different designers and act on behalf of particular stakeholders. Furthermore, it is unknown at design time when such agents will enter or leave the system, and what interests new agents will represent. To instil coordination in such systems is particularly demanding, as usually only part of them can be directly controlled at runtime. Agreement technologies refer to a sandbox of tools and mechanisms for the development of such open multiagent systems, which are based on the notion of agreement. In this paper, we argue that agreement technologies are a suitable means for achieving coordination in smart city domains, and back our claim through examples of several real-world applications. View Full-Text
Keywords: agreement technologies; coordination models; multiagent systems; smart cities agreement technologies; coordination models; multiagent systems; smart cities
►▼ Show Figures 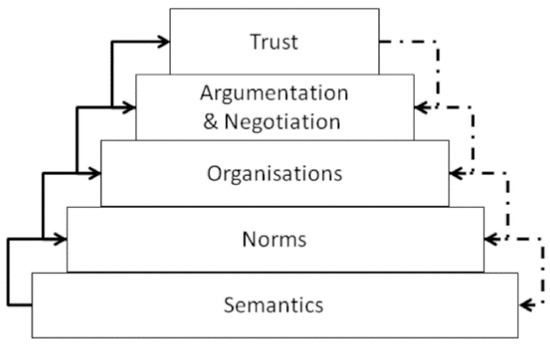