NMR-MPar: A Fault-Tolerance Approach for Multi-Core and Many-Core Processors
Previous Article in Journal

The proposed non-anthropomorphic 3-DOF upper-limb exoskeleton is appropriate for the purpose of material hanging in an industrial setting, especially for handling heavy loads by the front side of the human body.

2.1. Principle of the 5-DOF Upper-Limb Exoskeleton

2.2. Principle of the 3-DOF Upper-Limb Exoskeleton

Since the elbow joint of the 3-DOF upper-limb exoskeleton is internally rotated , the upper-arm and forearm of the exoskeleton are not parallel to the human arm. This problem mainly occurs when the human elbow performs the flexion action, i.e., elbow is in a non-straight state.
In the course of work, the impact of non-parallel is mainly reflected in two aspects:

Since the mechanical system will lose some degrees of freedom at the singular points, some motions cannot be achieved. So, singularities should be avoided in the design [20].
As described in Figure 2, the 5-DOF upper-limb exoskeleton is in the singular position. With this configuration, the arm is obliquely upward, i.e., . In this position, abduction or adduction motion cannot be achieved, because the rotation axes of and are collinear.
Since the 3-DOF upper-limb exoskeleton does not have two or more collinear rotation axes inside the workspace, there is no singularity within the workspace [25], and it is not necessary to avoid singularity in the workspace by rotating the axis of the coordinate or using redundant degrees of freedom [4,20].

Elbow pronation/supination has no effect on the size of the workspace, so it is considered a fixed constraint in the kinematics modeling. In order to simplify the configuration, the tilt of the abduction/adduction axis of the shoulder joint is removed, and the flexion/extension range of the shoulder joint is changed accordingly. Then, the kinematic model is obtained, as shown in Figure 6. The kinematics of the 5-DOF upper-limb exoskeleton is analyzed with the Denavit-Hartenberg parameters (DH), where 0 is the initial coordinate. The DH parameters are listed in Table 5.
The workspace of the 5-DOF upper-limb exoskeleton is shown in Figure 7, obtained by forward kinematics according to the motion range in Table 2. Here, the x-axis is in the same direction as the exoskeleton, and point (0,0,0) is the center of shoulder flexion/extension.

The upper-limb exoskeleton used for material handing is mainly used to perform lifting, pulling, pushing, raising and other complex movements in front of the body, or lifting on the side of the body. To obtain the loading conditions on the joints of the two exoskeletons during work, they are analyzed by dynamics through two typical movements: raising up and lateral lifting.

This work is supported by the National Key R&D Program of China “The study on Load-bearing and Moving Support Exoskeleton Robot Key Technology and Typical Application” under Grant No. 2017YFB1300500. We would like to thank the editor and all anonymous reviewers for their constructive suggestions. 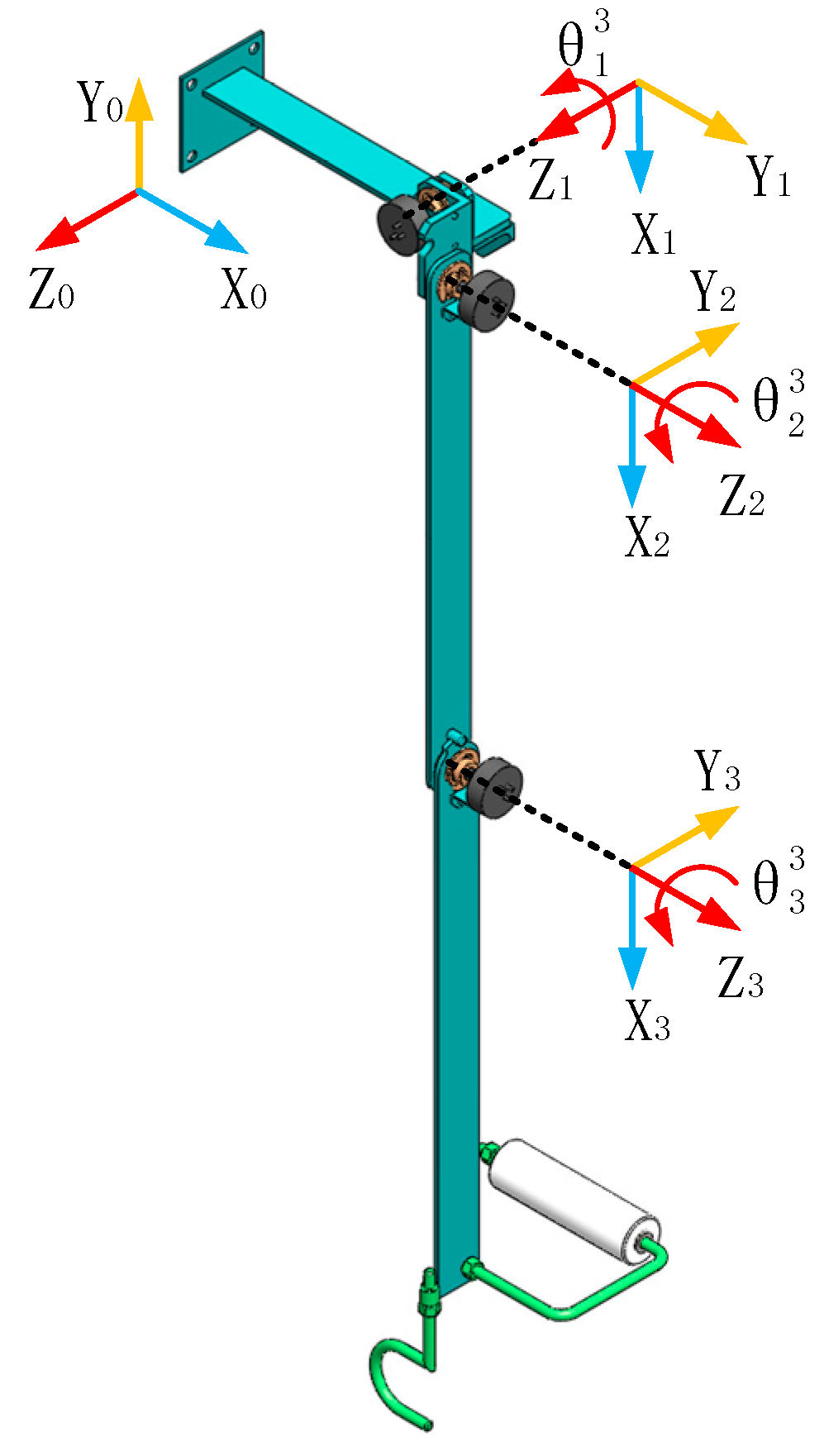 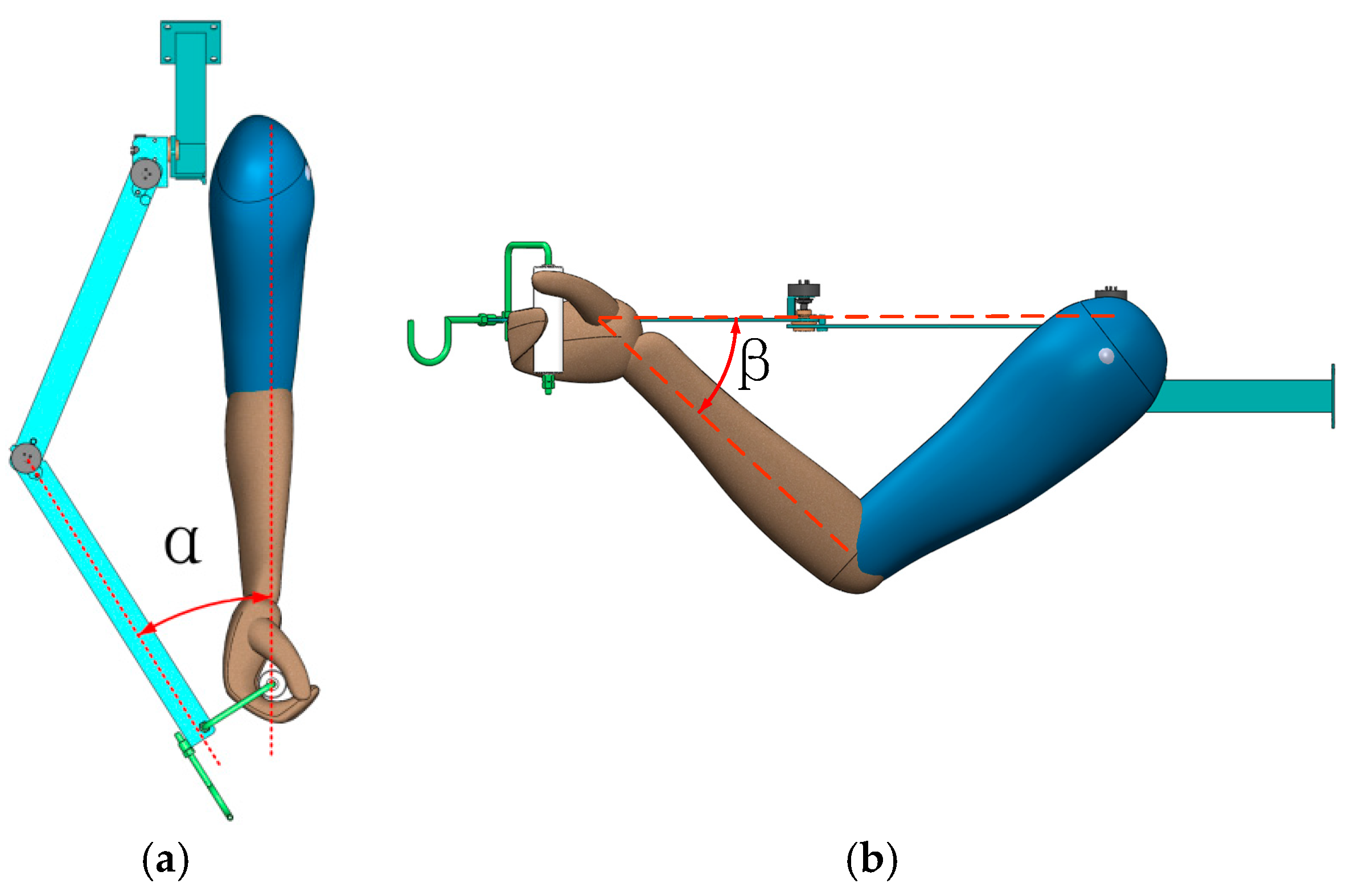 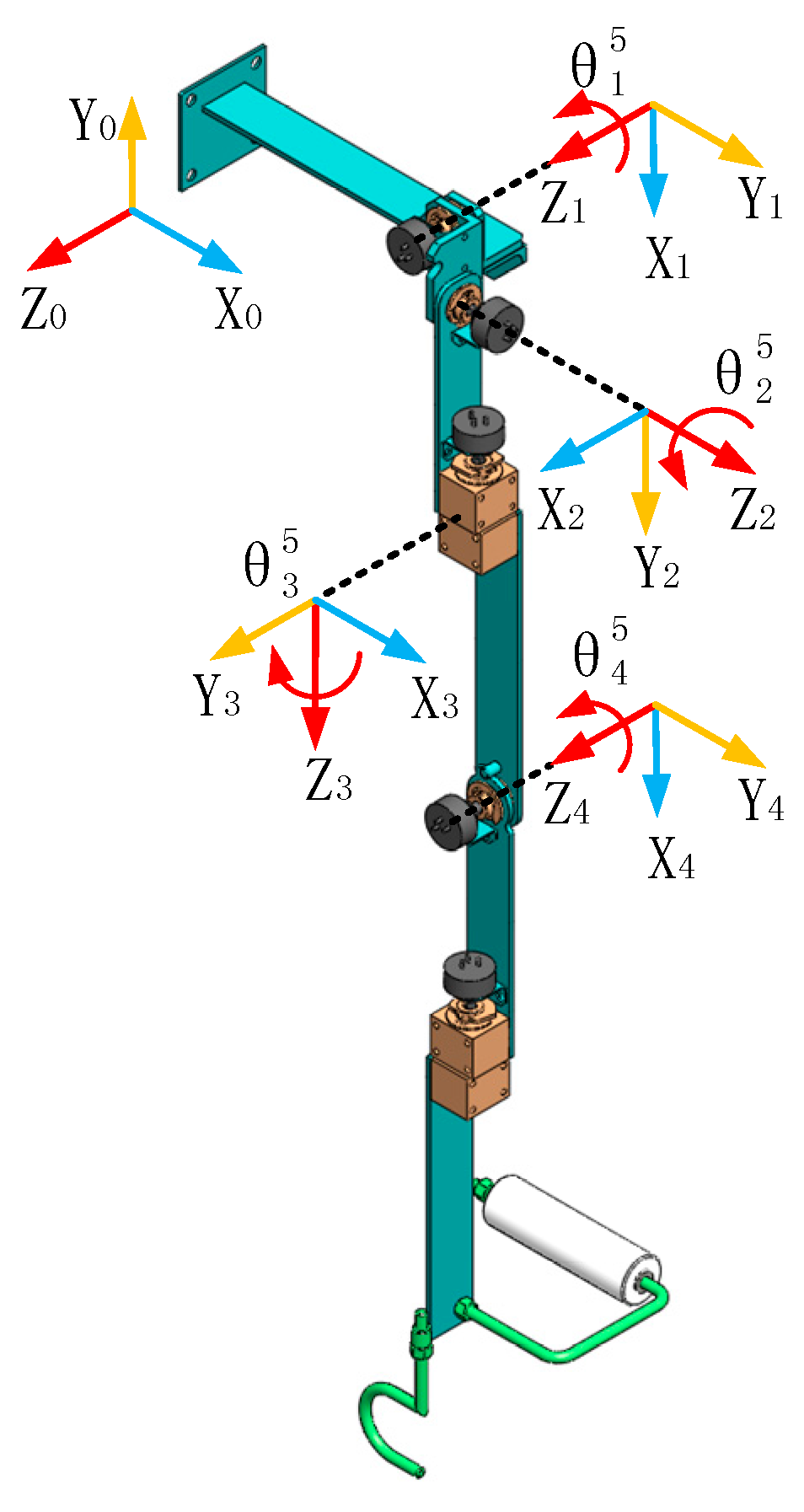 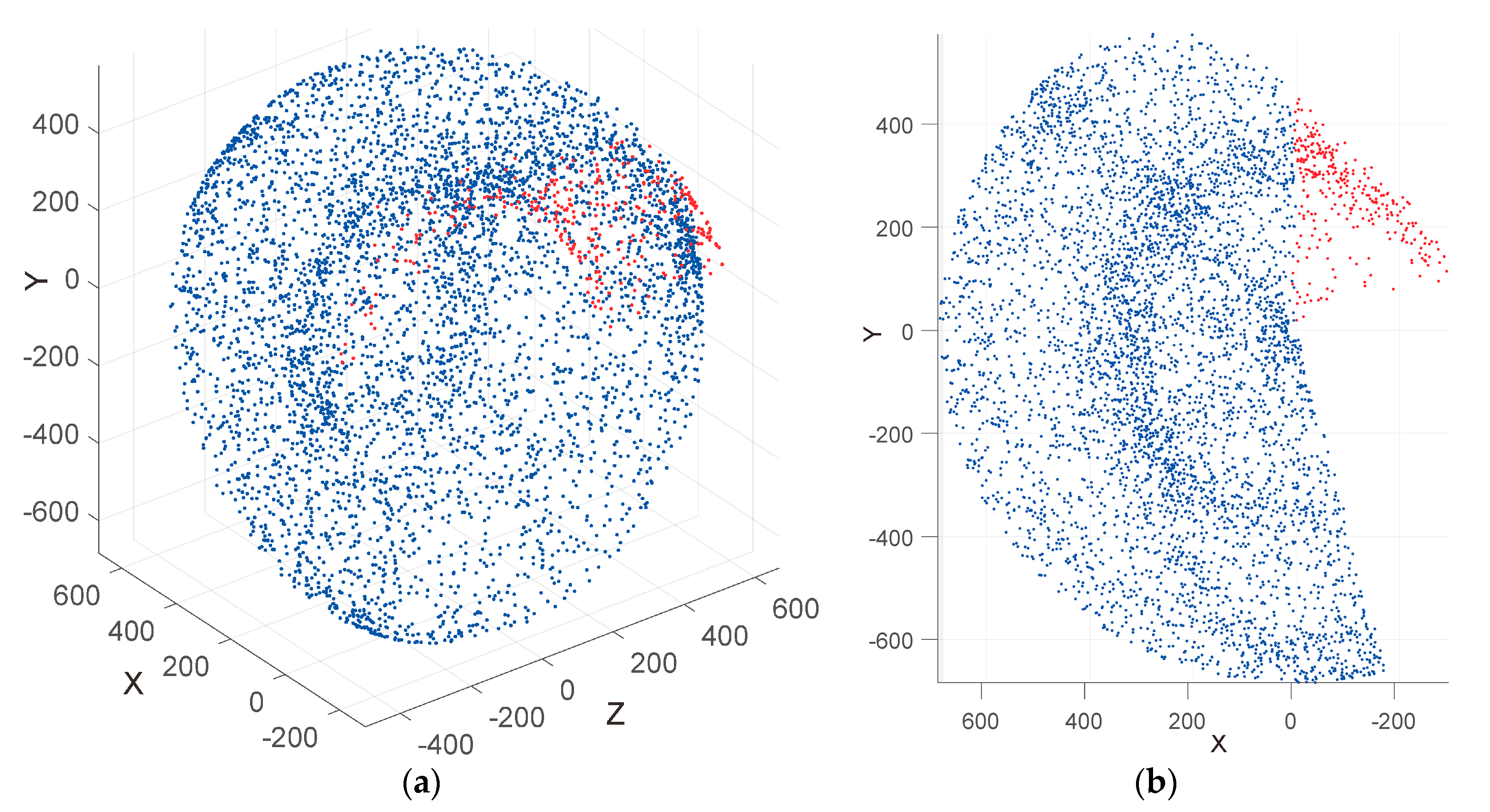 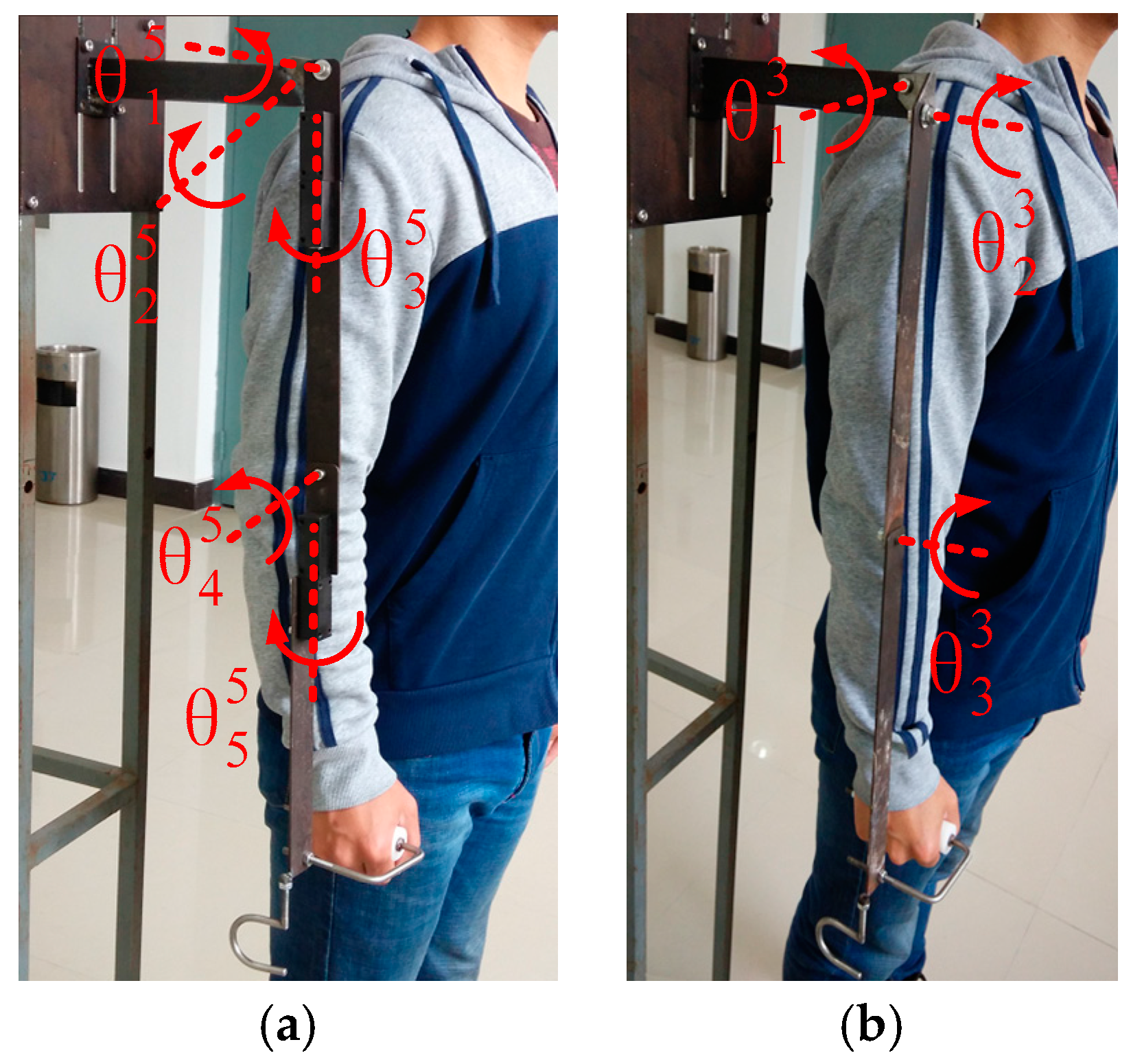 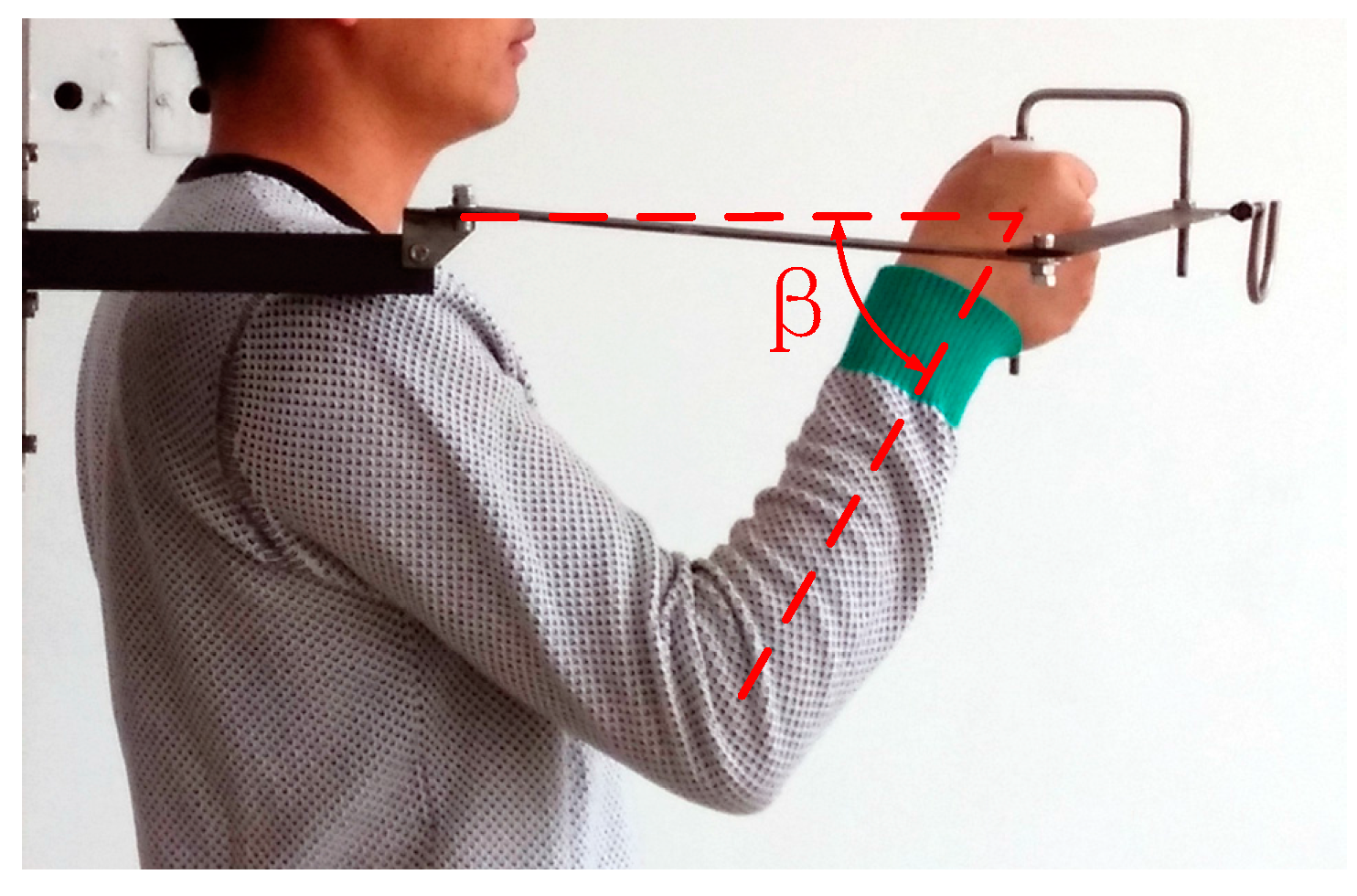