:
In thermal friction drilling (TFD) operations, the geometrical dimensions of bushing shape, height and wall thickness are the most vital consequences, since these increase the connecting length and strength. In this paper, AA7075-T651 aluminum alloys with 2, 4, 6, 8, and 10 mm thicknesses were drilled with the TFD process in order to investigate density, volume ratio, and height and wall thickness of the bushings. The experiments were conducted at constant spindle speed and feed rate conditions by using High Speed Steel (HSS) conical tools of 5, 10, 15, and 20 mm in diameter. It was experimentally found that the bushing height and the wall thickness had a tendency to increase linearly with the increase in both material thickness and tool diameter. The effect of tool diameter was found to have more influence on the measurable values than the thickness of the drilled material. The density of the bushing changed trivially. Approximately 70–75 percent of the evacuated material formed the bushing shape in TFD operations.
Keywords:
thermal friction drilling; bushing density; bushing shape; bushing height; bushing volume ratio; bushing wall thickness

Friction drilling is a hole production method, in which the metal cast sheet materials are drilled without cutting since a material sample heats up with the effect of the friction in the area of the conical tool and material contact. The generating temperature softens the sample, and then it is pushed downward by the tool, where the tool proceeds into the material to generate the bushing formation, increasing the connection strength in sheet materials. Therefore, investigation of the bushing formation is the main goal of TFD operations [1]. It is generally desired to obtain bushings only with a cylindrical shape, having no cracks and petal formations, in order to increase the connecting strength [2]. Higher bushing length leads to a greater screwing area as well as an increase in the connection strength of sheet materials [3]. Bushing shape, especially bushing height and wall thickness, depends on both the thickness of the drilled material (t) and the diameter of the hole (d), and hence it depends on the ratio of the drilled material and the diameter of the hole [4]. Bushing shape is completed in five steps and categorized according to the geometrical regions of the conical tool and proceeding dimension of the tool into the material [5]. The bushing height is measured to be approximately 2–3 times of the (t) [6].
A decrease in bushing height leads to an increase in the wall thickness of the bushing formation, which provides a greater screwing area by connecting sheet materials [7,8,9,10]. The height of the bushing depends on (d) rather than (t). The height of the bushing does not change with (t) for selecting constant hole diameters [11]. However, cracks and petal formations on the bushings cause the strength of the connections to decrease. Furthermore, deformation and fracture of the drilled material cause the occurrence of petal formation and cracks on bushing shape. Better selected tool geometry provides improved bushing formations [12].
During the TFD process, the bushing shape is formed with the help of the required temperature that occurs between the tool—workpiece interface owing to the friction. Due to this rise in temperature, the material thermally softens, and the yielding point decreases to facilitate plastic deformation to provide the bushing formation. The appropriate process temperature is generally between 1/2 and 2/3 of the melting temperature of the drilled material [13,14,15].
The main purpose of this paper is to investigate the effects of t and d on the geometrical dimensions of the bushing shape, such as bushing height and its wall thickness. Furthermore, the investigation of the proportion of the volume of the bushing shape to the total volume of the evacuated material is a crucial result. Therefore, this proportion was investigated experimentally in the TFD of the A7075-T651 aluminum alloy.

3.2. The Density and the Volume Ratio of the Bushing

The quality of the TFD process depends on the ratio of the bushing volume (VB) to the ejected material (VE). The higher this ratio, the better the quality bushing shape without cracks and petal formation. Higher VB values indicate less material flowed and dissipated around the hole to form the bushing.
Figure 9 shows the effects of d, t and ρ values on the VB and VE in the TFD process. As clearly seen from the figure, almost no change (from 2.54 to 2.75) was observed in bushing density under the applied conditions. If we identify the ratio of VB to VE as R, the value of R can be written as in Equation (6).
The change in the R ratio was between 61–84%. The interaction effects of factors on R and ρ are given in Figure 10 and Figure 11. For 2 mm material thickness, the R values decreased with hole diameter but increased for materials thicker than 4 mm. Lower R values were also more pronounced at higher t values (t > 4 mm). According to these results, d and t values should be selected to be smaller than 10 mm and 4 mm, respectively.

All authors provided individual contributions during the research, analysis, investigation, and preparation procedure of the paper.

This paper was not supported by anyone except the authors. 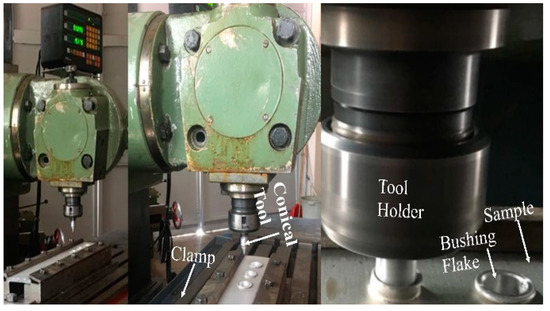 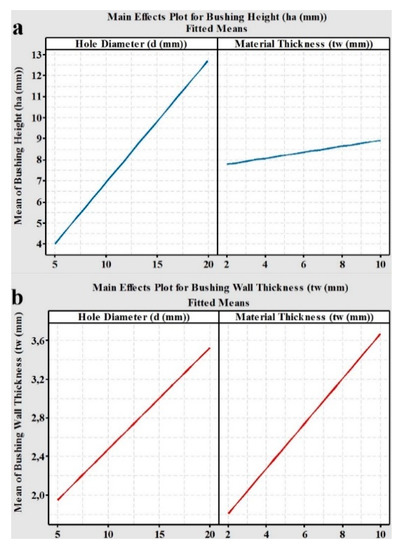 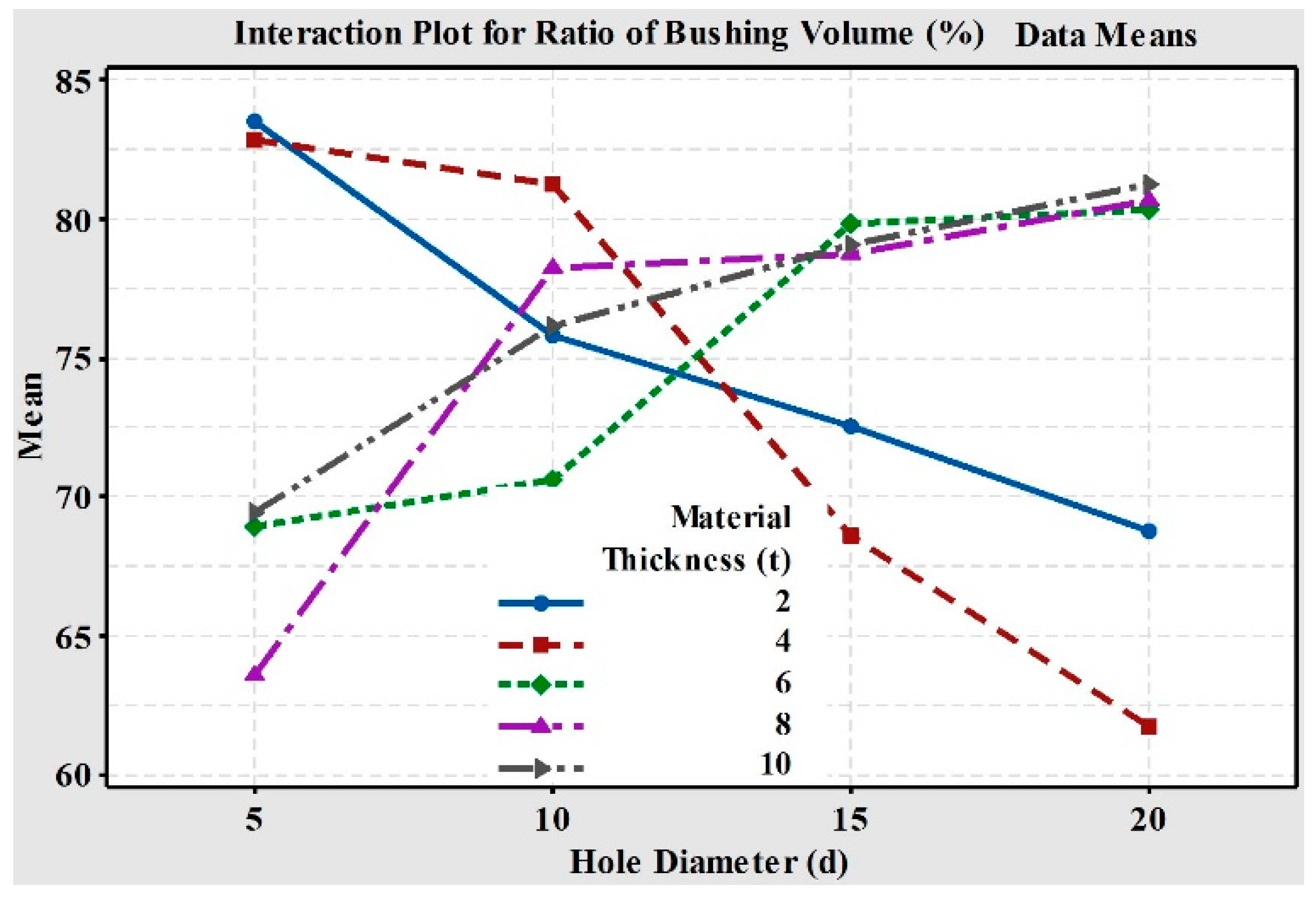