Comparison of Water Curtain Effectiveness in the Elimination of Airborne Vapours of Ammonia, Acetone, and Low-Molecular Aliphatic Alcohols
Next Article in Special Issue

Effects and Mechanisms of Microbial Remediation of Heavy Metals in Soil: A Critical Review

This study focused on the determination of both catabolic and genetic fingerprinting of bacteria inhabiting soil contaminated with car fuels. A surface layer (0–20 cm) of Mollic Gleysol was used for the experiment and was contaminated with car fuels—unleaded 95-octane petrol and diesel at a dose of 15 g per 10 g of soil. The experiment lasted 42 days and was performed at 20 °C. The metabolic potential of soil bacterial communities was evaluated using the Biolog EcoPlate system. The results demonstrated that petroleum substances influenced the structure of the microbial populations and their catabolic activity. The Arthrobacter, Paenibacillus, and Pseudomonas genera were found in diesel-contaminated soil, whilst Bacillus and Microbacterium were found in petrol-contaminated soil. Rhodococcus species were identified in both variants of impurities, suggesting the widest capability of car fuel degradation by this bacterial genus. The contamination with unleaded 95-octane petrol caused rapid inhibition of the metabolic activity of soil bacteria in contrast to the diesel treatment, where high metabolic activity of bacteria was observed until the end of the incubation period. Higher toxicity of petrol in comparison with diesel car fuel was evidenced. View Full-Text
Keywords: Biolog EcoPlate system; biodiversity; petroleum contaminants; soil; diesel; petrol Biolog EcoPlate system; biodiversity; petroleum contaminants; soil; diesel; petrol
►▼ Show Figures 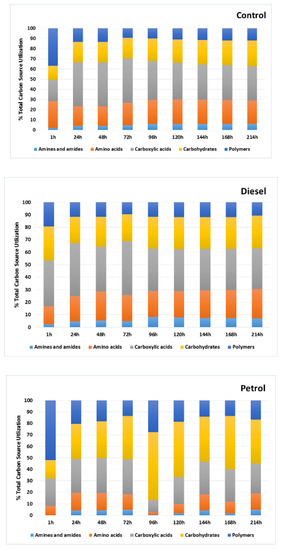