Amelogenin exon 5 could have potential for application in dental pulp capping.

Enamel matrix derivative (EMD) is applied for periodontal therapy. We created a synthetic amelogenin peptide (SP) derived from EMD, and have previously investigated the biological function of SP. However, it is unknown whether SP affects odontoblastic differentiation. In this study, we tested the effects of SP in the odontoblast-like cells, KN-3 cells. KN-3 cells were cultured with SP (0 to 1000 ng/mL) and then cultured for 3, 8, 24, or 48 h in order to determine the effects of SP on cell proliferation and detect its optimum concentration. KN-3 cells were treated with SP in odontogenic differentiation medium cultured for 3 or 7 days. Odontogenic markers were measured by the detection of alkaline phosphatase (ALP) activity and dentin sialo phosphoprotein (DSPP) expression, the calcified nodule formation, and calcium deposition. The addition of SP significantly promoted cell proliferation at 100 ng/mL, generating the greatest change in cell proliferation. SP also showed increased odontogenic expression markers and mineralization. These results suggest that SP, derived from EMD, could have potential for application in dental pulp capping.
Keywords:
emdogain; amelogenin; odontoblast; differentiation; mineralization

Enamel matrix derivative (EMD) can induce the formation of hard tissue, such as alveolar bone and cementum tissue [1,2]. EMD is applied for periodontal therapy and bone regeneration. We previously showed that subcutaneous injections of EMD can induce the growth of cartilage tissue and eosinophilic round bodies (ERBs) [3]. We further analyzed these ERBs by using MALDI-TOF, and found fragments of exon 5 of amelogenin.
We synthesized a 7-amino acid (WYQNMIR) peptide based on these fragments and tested whether the synthetic peptide (SP) would behave similarly to EMD [4]. We found that the SP could induce bone-like tissue formation in artificial periodontal defects in rats [5,6]. Moreover, we found that SP could enhance the cell proliferation of periodontal ligament (PDL) cells [7] and enhance osteoblastic differentiation in mesenchymal stem cells (MSCs) [8,9,10]. These findings also could help to clarify the biological functions of amelogenin exon 5.
EMD induces anti-EMD antibodies [11]. Only peptides of greater than approximately ten residues (or >5 kDa) can function as antigens [12,13]. SP is 7 amino acids long, with a mass of 1118 Da. Therefore, SP has no effect with respect to inducing an immunological response.
Dental caries, tooth fractures, and other types of dental trauma induce tooth loss. Direct pulp treatment requires materials that protect the pulp tissue but induce hard tissue formation, in order to repair and maintain dental pulp tissues [14,15,16,17,18,19]. This requirement has led to the design and introduction of new, bioactive agents for dental pulp tissue engineering materials.
To investigate dental pulp tissue regeneration, a rat odontoblast-like cell line, KN-3, was created by Prof. Kitamura and Prof. Nishihara [20]. KN-3 cells showed high levels of odontogenic expression and the ability to form calcium nodules [21]. KN-3 cells have also been used as an authentic control to study the differentiation of induced pluripotent stem (iPS) cells and embryonic stem (ES) cells into odontoblast-like cells [22,23].
The biological response to SP regarding odontogenic differentiation has not yet been investigated. In the present study, we evaluated the odontogenic effects of SP in KN-3 cells.

KN-3 cells were cultured in normal medium. After 24 h, the medium was changed to normal culture medium containing varying concentrations of SP (0 to 1000 ng/mL); KN-3 cells were incubated for 3, 8, 24, or 48 h. Cell proliferation was measured via the amount of formazan. We measured the absorbance and analyzed results using the SoftMax Pro software (Molecular Devices, Sunnyvale, CA, USA).

We first tested varying concentrations of SP on KN-3 cells to determine an effective concentration. We found that 100 ng/mL of SP significantly promoted KN-3 proliferation at 8, 24, 48, and 72 h (Figure 1A, p < 0.05). Based on these results, we chose 100 ng/mL SP as the optimal concentration for subsequent experiments.

In this study, we found that SP enhances the proliferation and odontogenic differentiation of KN-3 cells.
EMD and amelogenin peptide promote the proliferation of dental tissue cells, such as PDL fibroblasts and bone marrow stromal cells (BMSCs) [24,25]. In a previous study, we showed that SP, derived from EMD, can also promote cell proliferation of human BMSCs [8]. However, the effects of SP on proliferation in odontoblasts had not been previously investigated.
We showed that SP promotes KN-3 proliferation at 100 ng/mL, similar to the optimal concentration for PDL stem cells [10]. Therefore, we further examined the odontogenic differentiation at this concentration of SP (100 ng/mL).
ALP is considered to be an odontogenic marker [26]. We found that SP enhanced ALP activity, which is similar to the effect of EMD in hard tissues and the effect of SP in KN-3 cells. Therefore, SP can also induce odontogenic differentiation in KN-3 cells.
We quantified calcium levels in cultures of KN-3 cells by using alizarin red staining and investigation of extracellular matrix calcium deposition. Alizarin red staining is performed for the detection of calcified nodules formed by osteoblasts or odontoblasts [27]. We qualitatively and quantitatively determined changes in mineralization in response to treatment with SP. We found that SP enhanced mineralized nodule formation stained with Alizarin red and calcium deposition in cultures treated for 7 days, compared with untreated cultures. Our previous study showed that SP can also promote mineralization of PDL stem cells [16]. Our results suggest that SP can be used for the dentin formation for earlier protection of dental pulp tissue.
We also investigated the effect of SP on odontogenic differentiation. We found that it impacted the levels of DSPP, which is a noncollagenous dentin matrix protein that is known as an early-stage marker of odontoblastic differentiation [28,29]. KN-3 cells cultured for 1–12 h expressed high levels of DSPP [30]. This exhibited that KN-3 cells have the ability to differentiate into odontoblasts. In this study, we showed that DSPP expression was upregulated by SP in KN-3 cells. These results indicate that SP promotes odontoblastic differentiation.

We found that SP, an amelogenin peptide derived from EMD, can enhance the proliferation, odontogenic differentiation, and formation of calcified nodules of KN-3 cells in vitro. Our findings suggest that SP could be a new biomaterial in dental pulp therapy. Moreover, the present study partially clarified the function of amelogenin exon 5 in odontogenesis.

We acknowledge the contribution of Chiaki Kitamura and Tatsuji Nishihara for KN-3 cell providing. 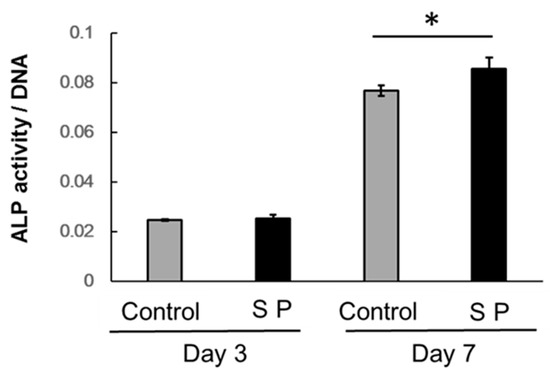 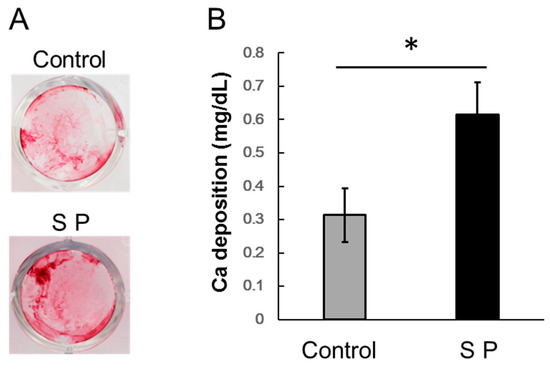 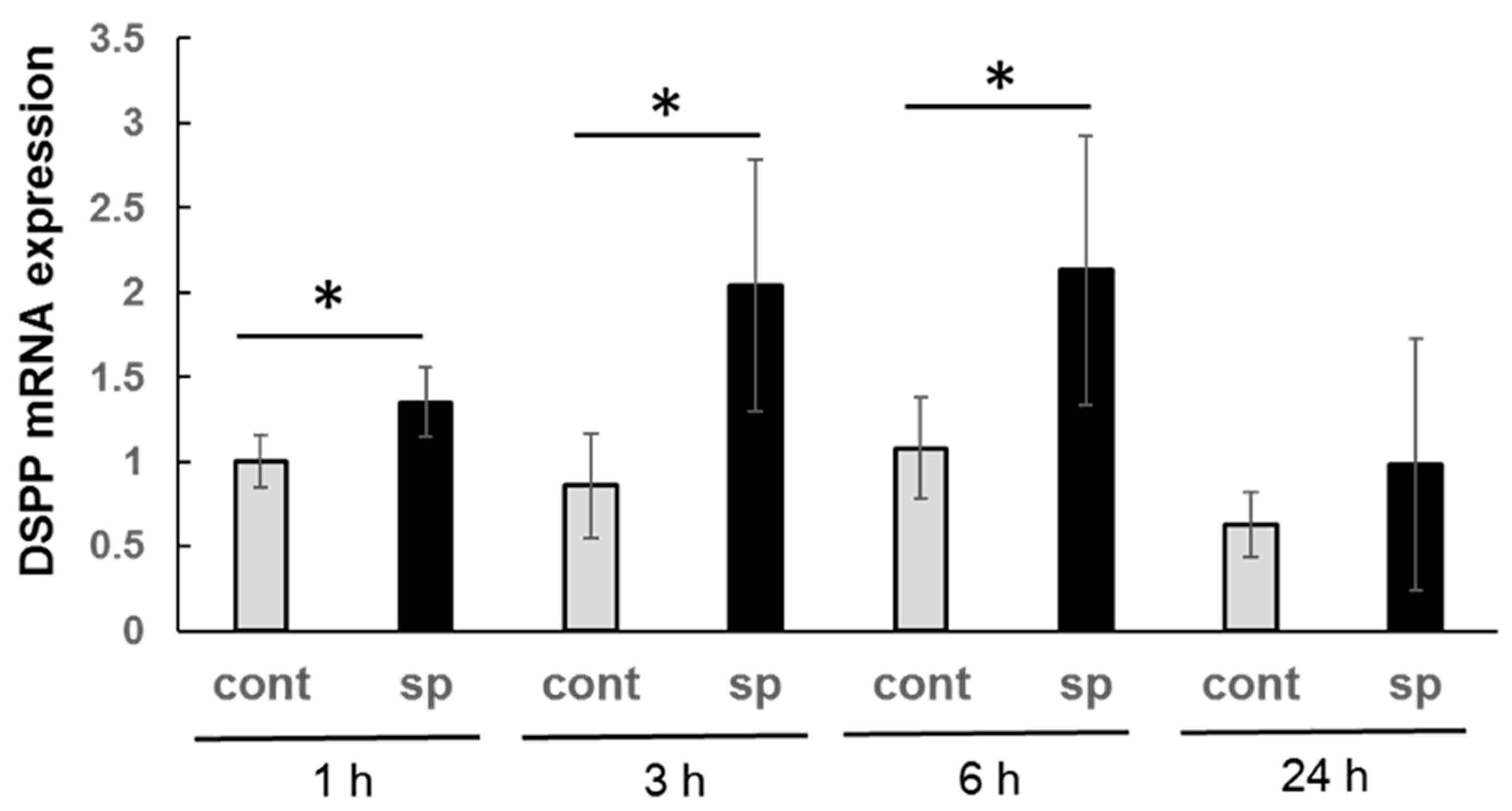