The experiments were conducted on a multifunction SC-CO2 jet testing system, independently developed by our team, as shown in Figure 2. The red arrows illustrate the direction of the flow of CO2, while the blue arrows show that of hot water. This system consisted of several parts, which are: the CO2 cartridge; the cooling part, transforming gaseous CO2 to liquid; the storage tank, storing CO2 temporarily; the high pressure plunger pump, pressurizing the liquid CO2; the surge tank, reducing the fluid fluctuation; the counterbalance valve, used to build the ambient pressure; and the cyclone de-sander, purifying the working SC-CO2. Simultaneously, a water-bath heater was used to heat the surge tank and jet chamber. The continuous regulation of the ranges of the nozzle inlet pressure and fluid temperature, were 2 MPa to 75 MPa and 290 to 373 K, respectively. The ambient pressure in the tests could be set up to 45 MPa. The pure SC-CO2 jet was provided through the pressurizing and heating processes, and then discharged into a rock erosion chamber and perpendicularly impinged on the specimen surface, as shown in Figure 2.
The nano-silica SC-CO2 jet was achieved in three steps. First, a certain mass fraction of the nano-silica additive was dispersed into liquid CO2 through 25 min of mechanical agitation, and was then sonicated by an ultrasonic probe (Hielscher Up400S, Hielscher Ultrasonics, Teltow, Germany) for another 25 min in the storage tank. Then, after flowing through the pressurizing and heating units, the liquid CO2 changed into a supercritical state. Finally, a high speed nano-silica SC-CO2 jet was formed after having passed through a convergent nozzle, which was then impinged on the specimen surface.
Pressure measurements were taken at the nozzle inlet and in the chamber at a 1 kHz sampling rate, using BD/SENSORS DMP334 transducers (BD|SENSORS, Therstein, Germany) with an accuracy of 0.175% FS. The temperatures in the chamber and at the nozzle inlet were measured using Omega T thermocouples, whose total accuracy was ±1 K. The real-time data were obtained by a QuantumXMX840 data acquisition and monitoring system. During each test, erosion of the rock by the SC-CO2 jet did not begin until the pressure and temperature obtained by the transducers was maintained at the wanted values. In this way, the practical application conditions for a SC-CO2 jet in the bottom hole were simulated.
As a convergent nozzle is a typical rock erosion nozzle of wide application, this kind of nozzle was used to investigate the effects of a nano-silica additive on the rock erosion characteristics of a SC-CO2 jet. The structure of the convergent nozzle used in the experiments is shown in Figure 3. The exit diameter was d0 = 1 mm, the length of the exit was l1 = 2d0, the length of the conical section was l2 = 11d0, and the convergent angle was α = 13.5°.
The rock erosion capacity of the SC-CO2 jet was evaluated by the erosion volume, V. The erosion volume was achieved in three steps, as shown in Figure 4. First, a certain amount of salt, which had a density of ρs = 2165 kg/m3, was measured using an electronic balance with a resolution of 0.001 g, and the mass was m1. Then, the erosion cavity was filled up with the salt, and the remaining salt was weighted on the balance, to record the mass, m2. Finally, the erosion volume was obtained using Equation (1). Each rock erosion experiment was repeated three times, and then the measured erosion volumes were averaged, in order to reduce the influence of accidental factors, making the results more reliable.

The rock erosion tests under high ambient pressure were conducted in a high pressure chamber, as is shown in Figure 2. In each test, after the specimen and nozzle were installed, the standoff distance could be regulated by changing the position of the specimen. Then, the kettle was securely tightened and could maintain a high temperature and pressure environment. Afterwards, the pump and water bath heater were switched on, and when the inlet pressure and fluid temperature had reached the desired value, and could be maintained, the side nozzle was then activated by a pneumatic valve, to establish a submerged environment within the chamber, with the wanted temperature and pressure. Thus, the erosion effect of the non-submerged jet on the specimen could be avoided. Once the submerged environment was established, the rock erosion by the impingement of the SC-CO2 jet discharging from the central nozzle began, and lasted for 120 s. Finally, the ambient pressure was released and the erosion volume could be obtained.

The primary experimental uncertainty included the accuracy of the pressure transducers obtaining the inlet and ambient pressures, the thermocouples achieving the fluid temperture, and the repeatability of the electronic balance measuring the mass of the salt, which were less than 0.175% FS, ±1 K, and ±0.001 g, respectively. The method for calculating the erosion volume also contributed to the experimental uncertainty. In order to reduce this uncertainty, the averaged erosion volumes were used in the following experimental analysis, as mentioned above.

A large number of specimens were tested at various mass fractions of nano-silica, standoff distances, inlet pressures, ambient pressures, and fluid temperatures. The most typical macroscopic appearances of the eroded specimens were presented and described, to give a qualitative analysis, while the erosion volume was plotted to quantitatively analyze the erosion characteristics of the nano-silica SC-CO2 jets.

Figure 5 illustrates the macroscopic appearances of the rock specimens eroded by the nano-silica SC-CO2 jet with a mass fraction of 12 wt %, and the pure SC-CO2 jet, respectively, at different standoff distances. The inlet pressure was set at a constant value of 50 MPa, the ambient pressure was set at 15 MPa, and the fluid temperature was set at 340 K. As is shown in the figure, it is obvious that a distinct cavity is formed at the center of each specimen, by the SC-CO2 jet impingement. This phenomenon indicates that the damage to the rock specimen, caused by the jet impingement, is a “drilling type” damage. This type of damage is characterized by rather deep cavities with small diameters, which can be found in rocks with comparatively high porosity, such as limestone, sandstone, and so on [35,36]. Moreover, the erosion diameters of the cavities on the surface of the rock specimens eroded by the nano-silica SC-CO2 jet, are larger than that of the cavities eroded by the pure SC-CO2 jet. Additionally, the difference in the erosion diameter of the two jets at the same standoff distance, becomes more obvious when the standoff distance is increased. This phenomenon indicates that the erosion capability of the SC-CO2 jet can be enhanced by the nano-silica additive, which seems to be attributed to the impact on the rock material, generated by the high speed nano-silica particles [37]. Apart from the erosion diameter, the macroscopic appearance of the specimens eroded by the two jets, show almost no difference. In addition, the macroscopic appearance of the eroded rock specimens is in good agreement with the high speed jet erosion results of previous articles [27,38], strengthening the reliability of this experiment.

3.3. Effect of the Nano-Silica Additive under Different Inlet Pressures

3.6. Effect of the Nano-Silica Additive under Different Fluid Temperatures

The authors express their appreciations to National Key Basic Research Program of China (No. 2014CB239203), National Natural Science Foundation of China (No. 51474158), and Program for New Century Excellent Talents in University of Ministry of Education (Grant No. NCET-12-0424) for the financial support of this work. 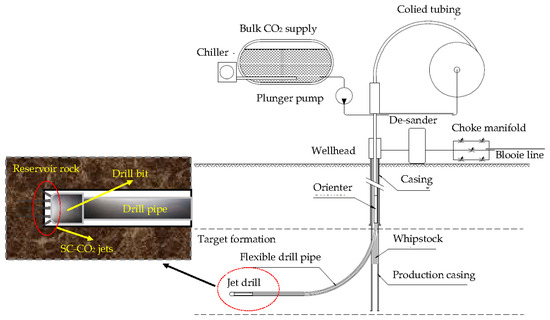 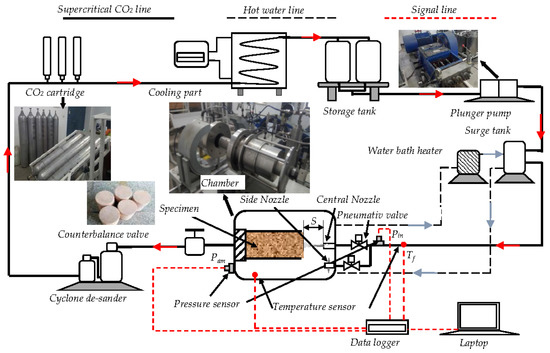 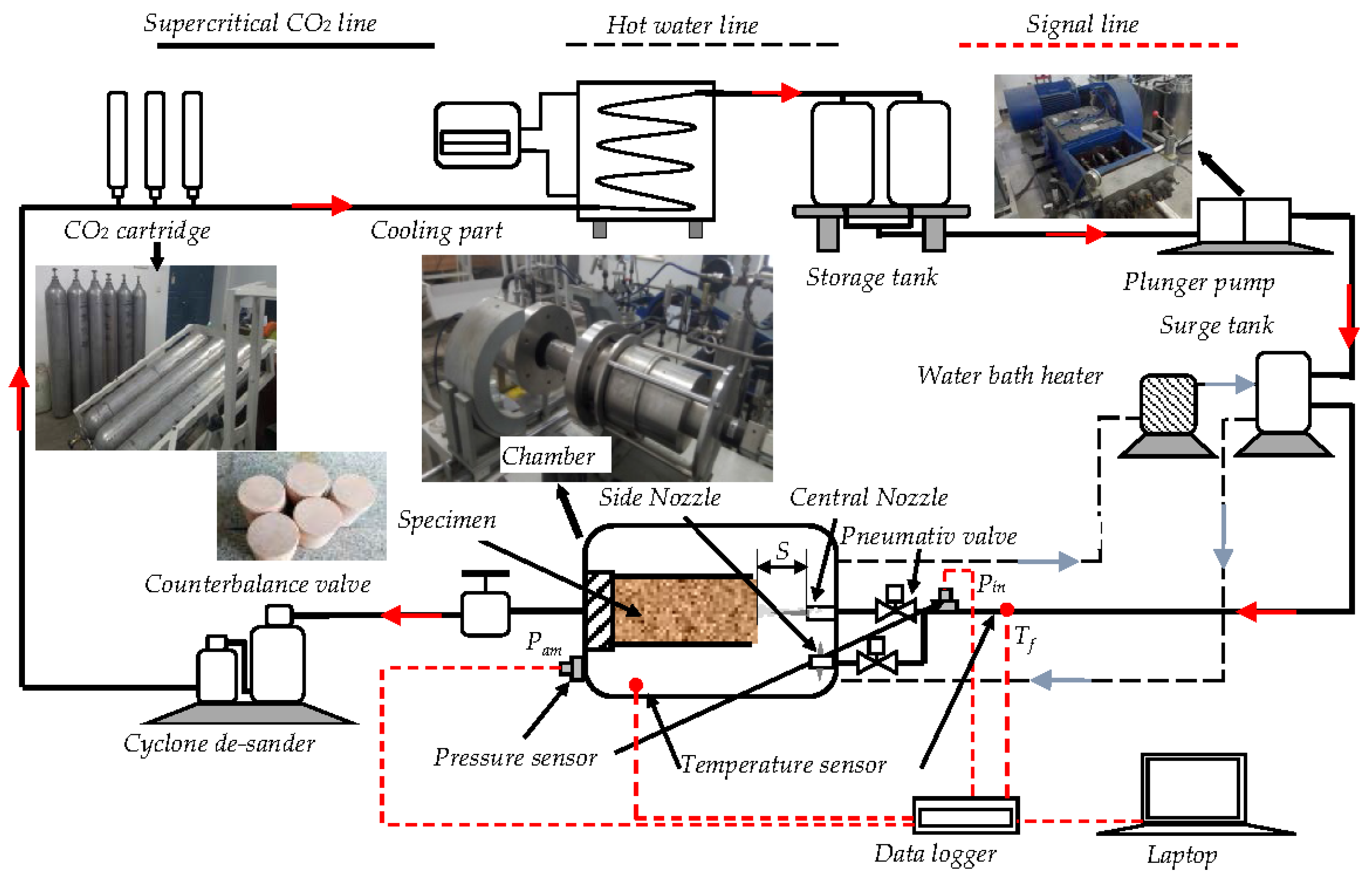 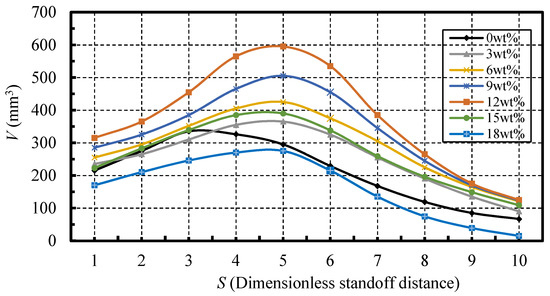 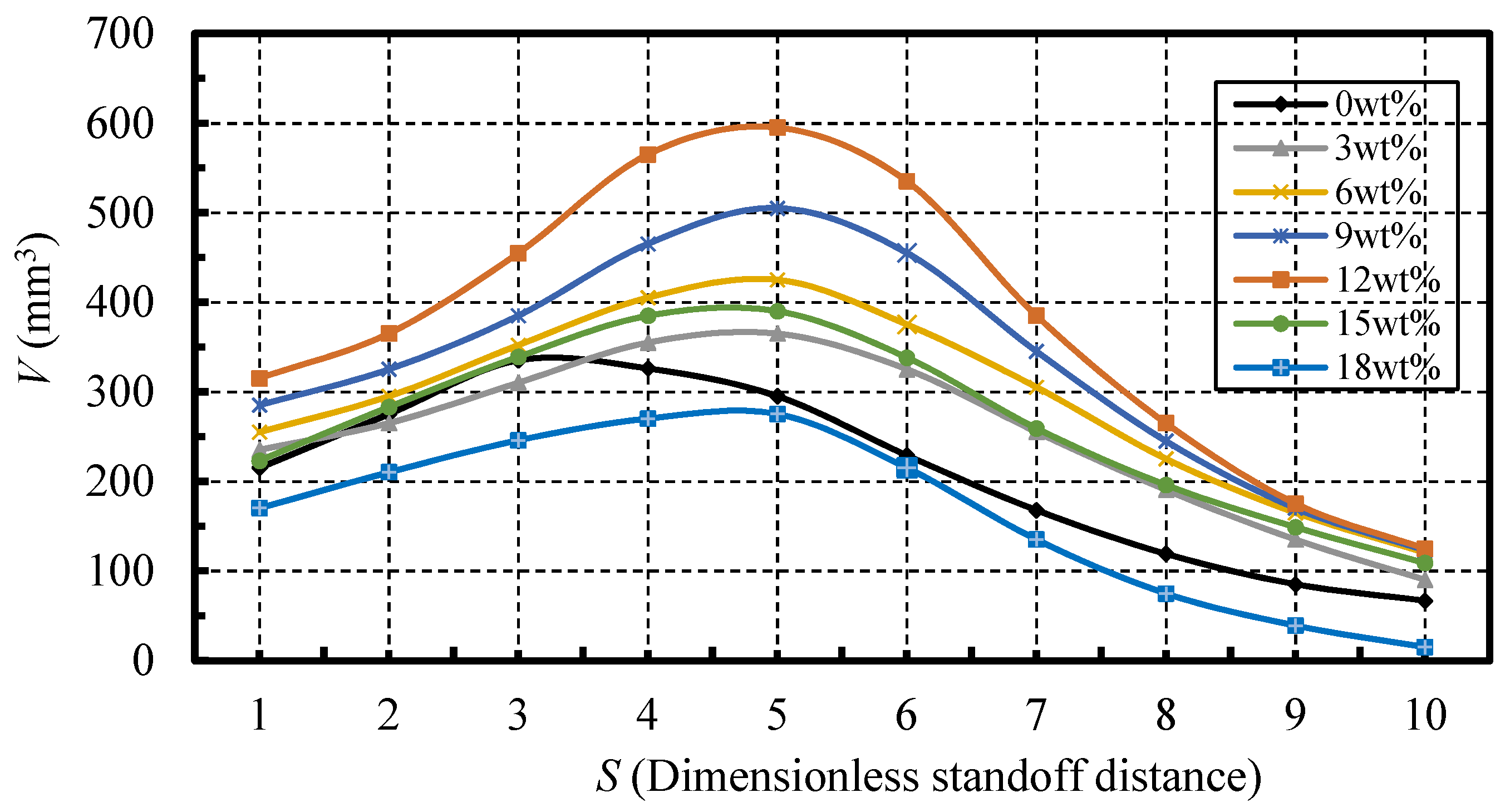 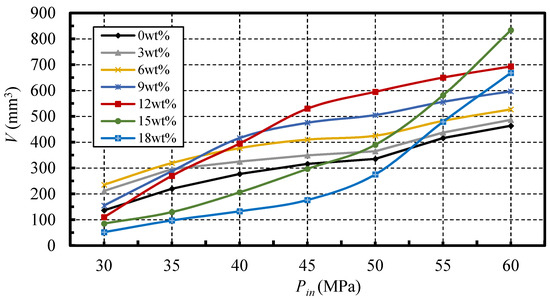 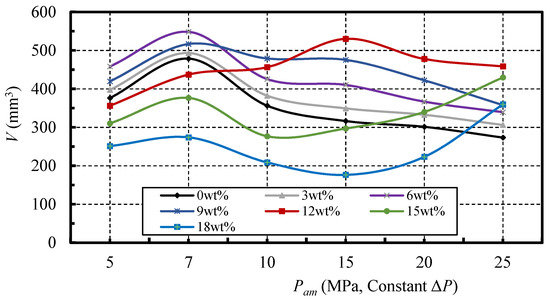 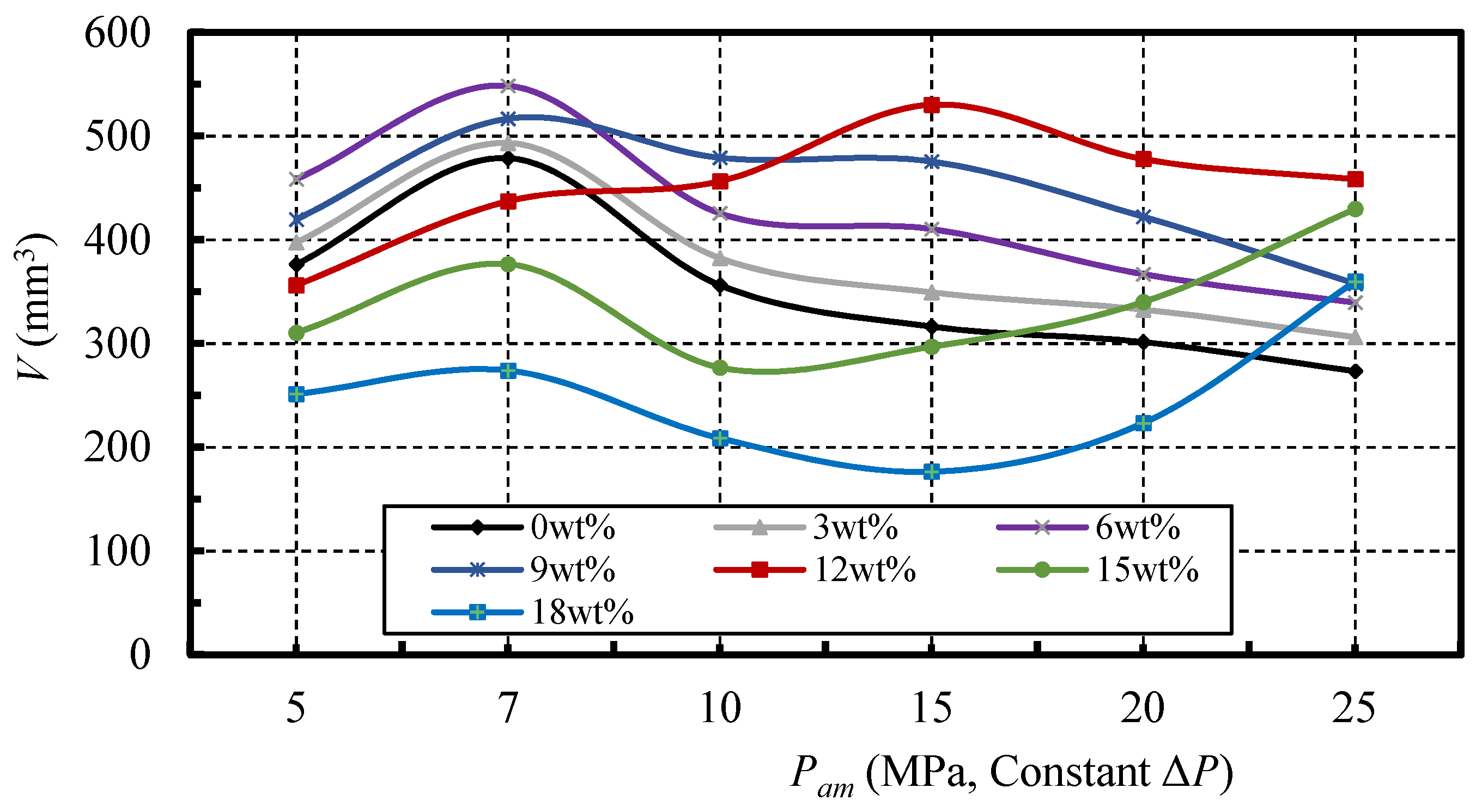 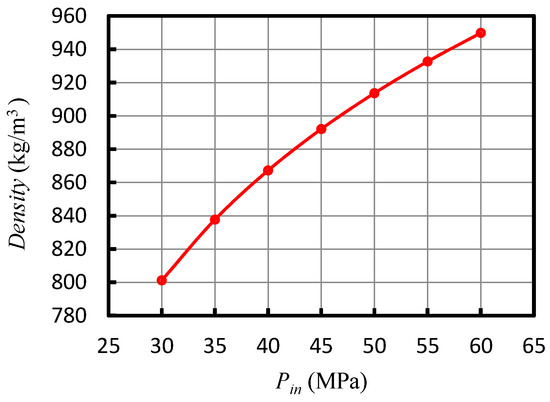 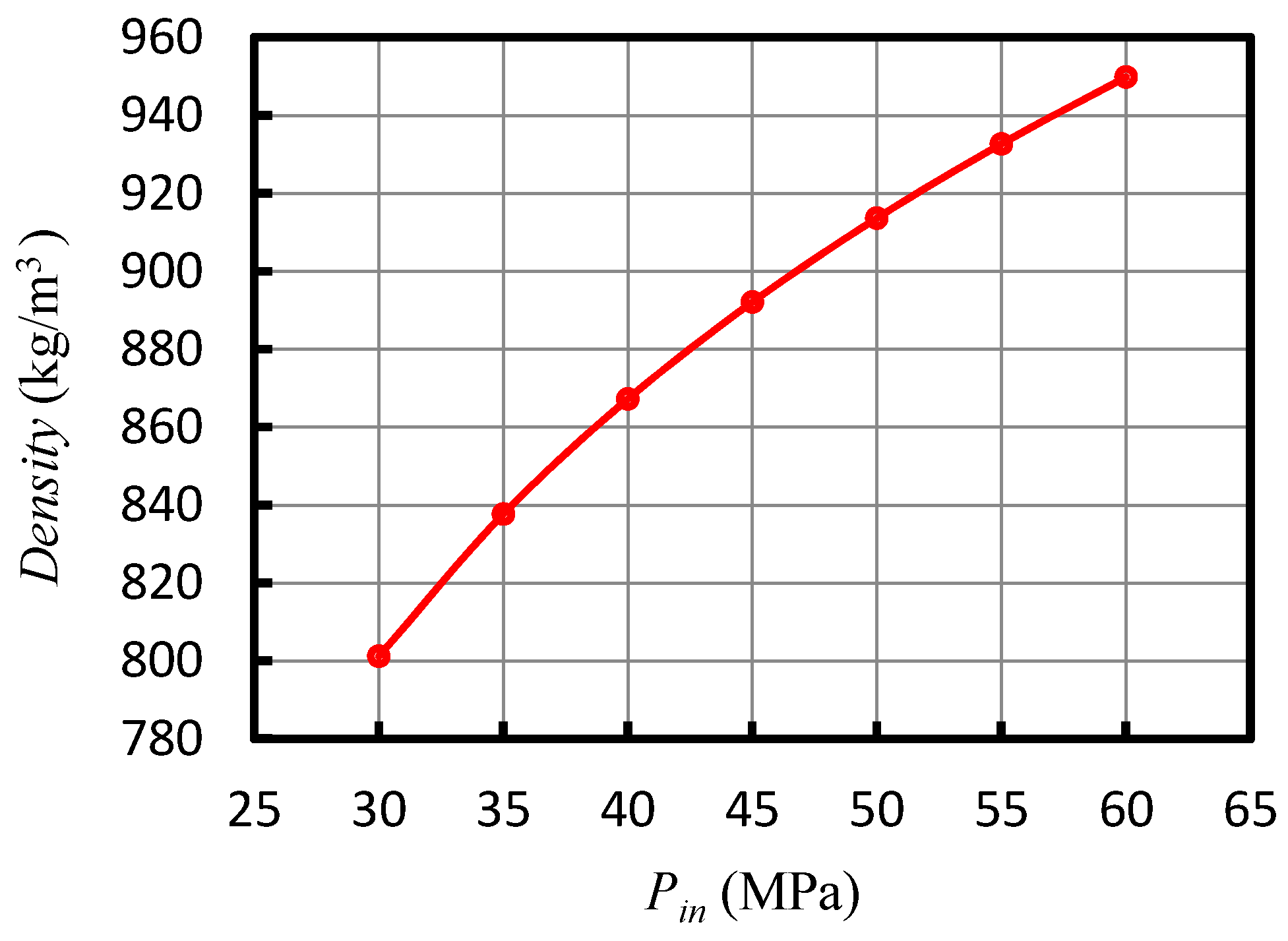 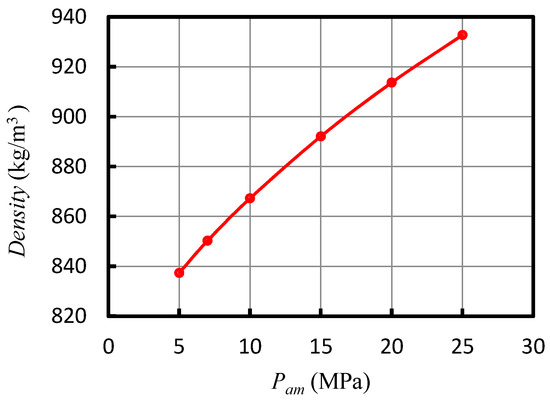 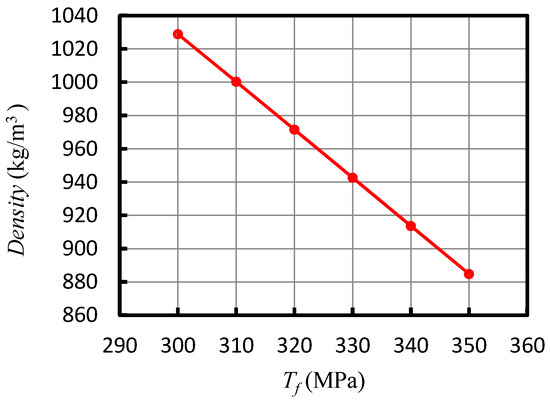 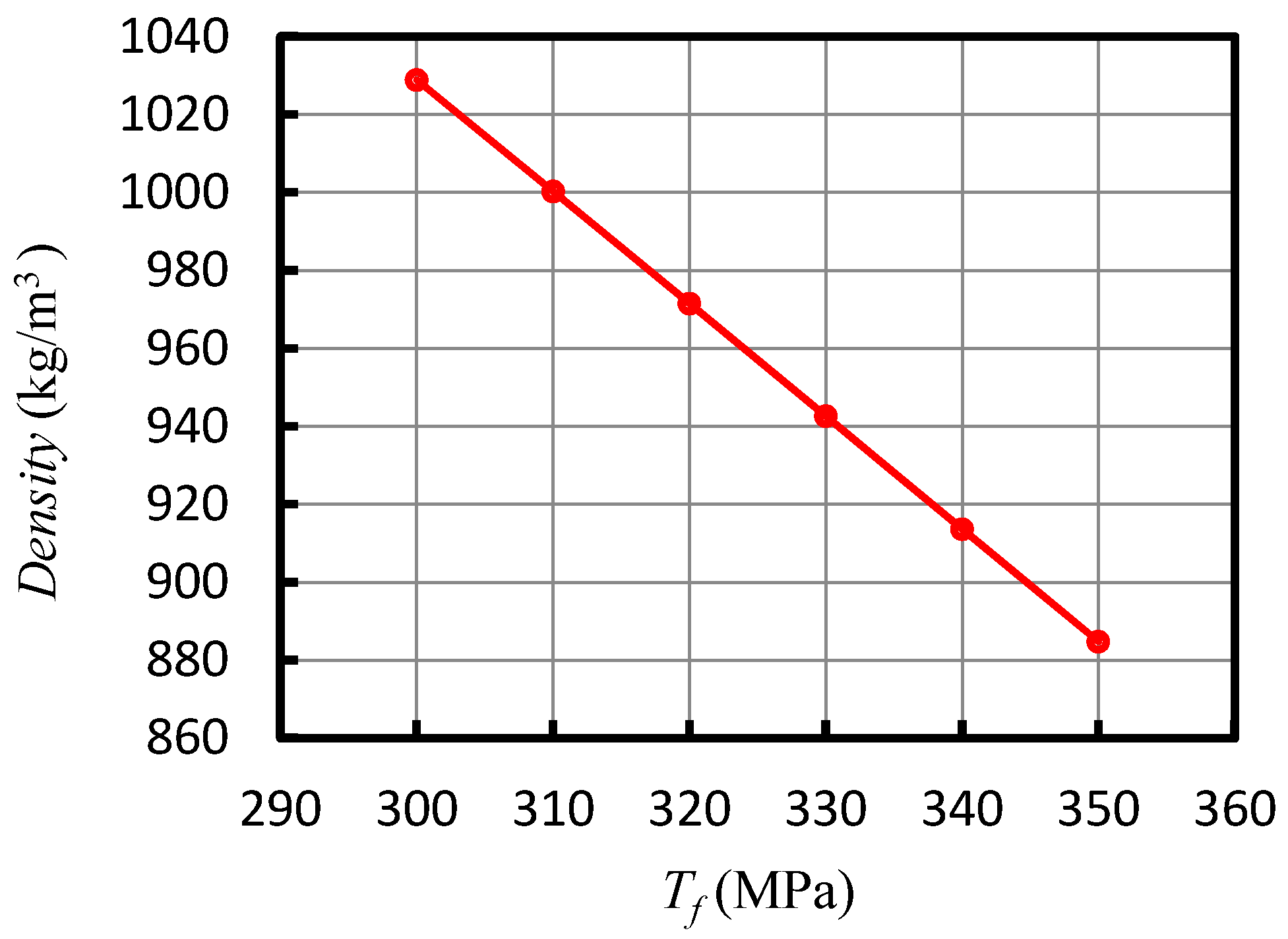 Table 2. Physical and mechanical properties of the rock specimens.