Triterpene compounds like betulin, betulinic acid, erythrodiol, oleanolic acid and lupeol are known for many pharmacological effects. All these substances are found in the outer bark of birch. Apart from its pharmacological effects, birch bark extract can be used to stabilise semisolid systems. Normally, birch bark extract is produced for this purpose by extraction with organic solvents. Employing supercritical fluid technology, our aim was to develop a birch bark dry extract suitable for stabilisation of lipophilic gels with improved properties while avoiding the use of toxic solvents. With supercritical carbon dioxide, three different particle formation methods from supercritical solutions have been tested. First, particle deposition was performed from a supercritical solution in an expansion chamber. Second, the Rapid Expansion of Supercritical Solutions (RESS) method was used for particle generation. Third, a modified RESS-procedure, forming the particles directly into the thereby gelated liquid, was developed. All three methods gave yields from 1% to 5.8%, depending on the techniques employed. The triterpene composition of the three extracts was comparable: all three gave more stable oleogels compared to the use of an extract obtained by organic solvent extraction. Characterizing the rheological behaviour of these gels, a faster gelling effect was seen together with a lower concentration of the extract required for the gel formation with the supercritical fluid (SCF)-extracts. This confirms the superiority of the supercritical fluid produced extracts with regard to the oleogel forming properties. View Full-Text
Keywords: supercritical carbon dioxide; RESS; birch bark; triterpenes; gel formation; rheology; amplitude sweep supercritical carbon dioxide; RESS; birch bark; triterpenes; gel formation; rheology; amplitude sweep
►▼ Show Figures 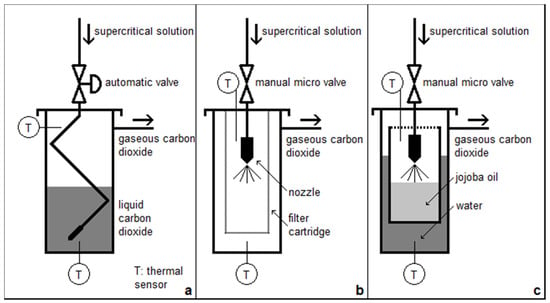