Enhanced Agarose and Xylan Degradation for Production of Polyhydroxyalkanoates by Co-Culture of Marine Bacterium, Saccharophagus degradans and Its Contaminant, Bacillus cereus
Previous Article in Journal

Groundwater is an extremely important resource that may, however, contain a variety of toxic and bioaccumulative contaminants. Traditional “Pump and Treat” technologies for treating contaminated groundwater are no longer time- or cost-effective; therefore, new technologies are needed. In this work, we synthesized core–shell materials of micrometric dimensions based on the interaction of iron particles (the core) and fermentable biopolymers such as polyhydroxybutyrate (PHB, the surrounding shell) to be used in permeable reactive barriers for the removal of chlorinated pollutants from contaminated groundwater. The materials were prepared by precipitation techniques that allowed stable preparations to be obtained, whose chemico-physical properties were thoroughly characterized by scanning electron microscopy, porosimetry, Fourier transform infrared spectroscopy (FTIR), thermogravimetric analyses, disc centrifuge analysis, and dynamic light scattering. The properties of the prepared materials are very promising, and may enhance the performance of permeable reactive barriers towards chlorinated compounds.
Keywords: colloidal stability; zero-valent iron; polyhydroxybutyrate; biopolymer colloidal stability; zero-valent iron; polyhydroxybutyrate; biopolymer

Chloroform (≥99%) was purchased from Sigma (St. Louis, MO, USA) and used as received. ZVI was kindly provided by Connelly-GPM Inc. (Chicago, IL, USA) for investigation purposes. Before use, it was sieved, and the fraction with dimensions smaller than 45 µm was selected. Polyhydroxybutyrate (PHB, Biomer® P209) was purchased from Biomer (Krailing, Germany). In order to reduce its crystallinity, before its use, PHB powder was melted on a heated surface and immediately frozen.

Thermally pretreated PHB was dissolved in chloroform at a concentration of 0.25 mg/mL. ZVI samples were dispersed in water through sonication for 15 min. A selected amount of PHB solution was then mixed with the ZVI aqueous dispersion and sonicated for another 15 min (PHB/ZVI 2:1, 1:1, or 1:2 w/w). Chloroform was then eliminated by placing the mixture in a rotary evaporator (Labtech Srl, Sorisole, Italy) until the complete disappearance of the organic phase. The ZVI–PHB complex was recovered from the aqueous phase by filtration.

For microscopy studies, samples were deposited on mica supports and analyzed using an Auriga 405 (ZEISS, Oberkochen, Germany) microscope, operating at low extracting voltage (1.5–4 kV) and current (7.5 µm aperture) in order to reduce the significant charging of the substrate and avoid radiation damages and artifacts.

Surface area, Brunauer–Emmett–Teller (BET) multipoint method [31], and textural analysis were obtained by N2 adsorption/desorption measurements at the liquid nitrogen temperature (−196 °C) using a 3-Flex 3500 analyzer (Micromeritics, Norcross, GA, USA). The samples were pre-treated under vacuum at 80–90 °C for 3 h. The pores distribution was determined from the adsorption curve by the Barret–Joyner–Halenda (BJH) method [32]. The total pore volume was determined by the rule of Gurvitsch.

Thermal stability and composition of the PHB and ZVI–PHB complexes were determined using TGA/SDTA851e apparatus (Mettler Toledo, Columbus, OH, USA). The experimental atmosphere was nitrogen at a flow rate of 20 mL/min. The sample was heated from 30 °C to 700 °C.

The centrifugal particle sedimentation technique (CPS Disc Centrifuge, DC24000UHR, CPS Instruments Inc., Prairieville, LA, USA) was used for particle size distribution analysis. Measurements were made at a disc rotation speed of 4800 rpm, and the particle sedimentation was carried out in a 8%–24% (w/w) sucrose density gradient. Prior to each sample measurement, the instrument was calibrated using a 1400 nm PVC nanosphere standard (CPS Instruments Inc., Prairieville, LA, USA).

The zeta potential values were determined in freshly prepared suspensions with a Zetasizer ZS (Malvern Instruments Ltd., Malvern, UK). Each measurement was performed in sequences of ten runs with autocorrelation functions set at 10 s. The zeta potential of each sample was obtained from the average of three measurements.

ZVI was combined with PHB by using an operatively simple procedure based on the precipitation of the polymer from an organic phase in the presence of an aqueous dispersion of ZVI. Different ZVI/PHB ratios (2:1, 1:1 and 1:2 w/w) were tested. We first investigated the morphology of the ZVI sample used for the preparation of ZVI–PHB complexes by using SEM (scanning electron microscopy) microscopy, which revealed a highly irregular and microporous morphology (Figure 1A). With the same technique, we then analyzed ZVI–PHB samples prepared with different ZVI/PHB ratios. Representative images are reported in Figure 1B–D. It can be seen that the presence of PHB seems to have altered the surface of ZVI. This is more evident for the ZVI–PHB sample prepared with the highest quantity of PHB (ZVI/PHB ratio of 1:2 w/w), where the polymer seems to have formed a film on the Fe surface (Figure 1D). All further studies were therefore conducted on ZVI–PHB complexes with a ZVI/PHB ratio of 1:2.

FTIR was used in order to explore the coordination of the organic material to the ZVI in ZVI–PHB complexes (Figure 2). FTIR analysis of the uncoated ZVI displays a wide infrared undefined spectrum between 750 and 1800 cm−1. The PHB displays a peak at 1720 cm−1 that can be assigned to the carbonyl group in the polymer. FTIR spectra of the ZVI–PHB complexes present the same peaks found in the PHB spectrum, yet with a smaller intensity of the peaks. Chung and Lee [33] reported similar observations, in which they evidenced the disappearance of the -COOH and -OH stretch (close to 3030 cm−1), and C=O strong stretch modes (around 1720 cm−1) after mercaptoacetic acid coating of Ag surfaces. In particular, in our data, the deficiency of a band representing carbonyl (close to 1720 cm−1) group indicates that a monolayer of PHB is adsorbed chiefly via carbonyl group on the metallic Fe. Therefore, FTIR analysis clearly indicated the efficiency of the procedure employed for the preparation of ZVI–PHB composites.

BET specific surface area and total pore volume values are reported in Table 1. The materials are mesoporous (Figure 3a) with a characteristic pore size (diameter) distribution in the range 20–500 Å (Figure 3b). Such a porosity is very modest, and is probably due to the characteristics of the commercial PHB starting material. The thermal treatment of PHB slightly decreases both the specific surface area and the total pore volume by decreasing the amount of pores, particularly those with diameter in the 20–200 Å range. As far as the ZVI–PHB composite is concerned, it maintains the textural features of the treated PHB for porosity up to 40 Å in diameter, and shows a slight increase in the amount of pores with size >40 Å.

In our study, it was determined that ~18% of the ZVI and ZVI–PHB composites belong to the small fraction. This translates to a large contribution of that fraction to the active surface area, which was determined to be 1.73 m2/g (49% of the entire surface area of ZVI–PHB). Particle size distributions of bare ZVI and ZVI–PHB complexes analyzed by CPS technique are presented in Figure 5. The median particle number size distribution of bare ZVI particles within the range of 0.250 µm to 5 µm was found to be 0.44 ± 0.01 µm. However, after PHB addition, the mean particle size of ZVI was determined to be 0.40 ± 0.01 µm. Clearly, the particle size distribution of ZVI–PHB samples becomes sharper, and its mean size is smaller in comparison to the bare ZVI particles. In addition, the particle size measurements correspond with those evidenced by scanning electron microscopy (SEM) analysis (Figure 1).

In this work, we employed an operatively simple yet effective procedure based on the precipitation of PHB from an organic phase in the presence of an aqueous dispersion of ZVI in order to prepare composite materials suitable for advanced bioremediation applications. The materials employed are commercially available at a low-cost, combining the well-known reducing properties of ZVI towards chlorinated pollutants and a slow-releasing carbon source such as PHB. Experimental data indicate that a monolayer of the polymer was adsorbed on the Fe metallic surface, with a final ratio between the two components in the ZVI–PHB composite of approximately 1:1. This interaction was able to increase the stability of ZVI particles, as evidenced by zeta-potential measurements and disc centrifuge analysis. The accurate chemico-physical characterization of the ZVI–PHB composites described in this study is of fundamental importance and preliminary to successive studies that will explore their application in the treatment of chlorinated solvent-contaminated aquifers. The ZVI–PHB composites described in this work appear to be particularly promising materials for enhancing the performance of PRBs towards chlorinated compounds.

The authors would like to acknowledge financial support from Università degli Studi di Roma “La Sapienza”, Grandi Progetti Universitari Anno 2015, “Development and characterization of reactive materials for groundwater remediation”, as well as the Czech Ministry of Education, Youth and Sports in the framework of the projects: the National Programme for Sustainability I (LO1201), Research Infrastructure NanoEnviCz (LM2015073), the OPR & DI (operational program research and development for innovations) project “Institute for Nanomaterials, Advanced Technologies and Innovation”, CZ.1.05/2.1.00/01.0005 and the Competence Centre of the Technology Agency of the Czech Republic (TE01020218). 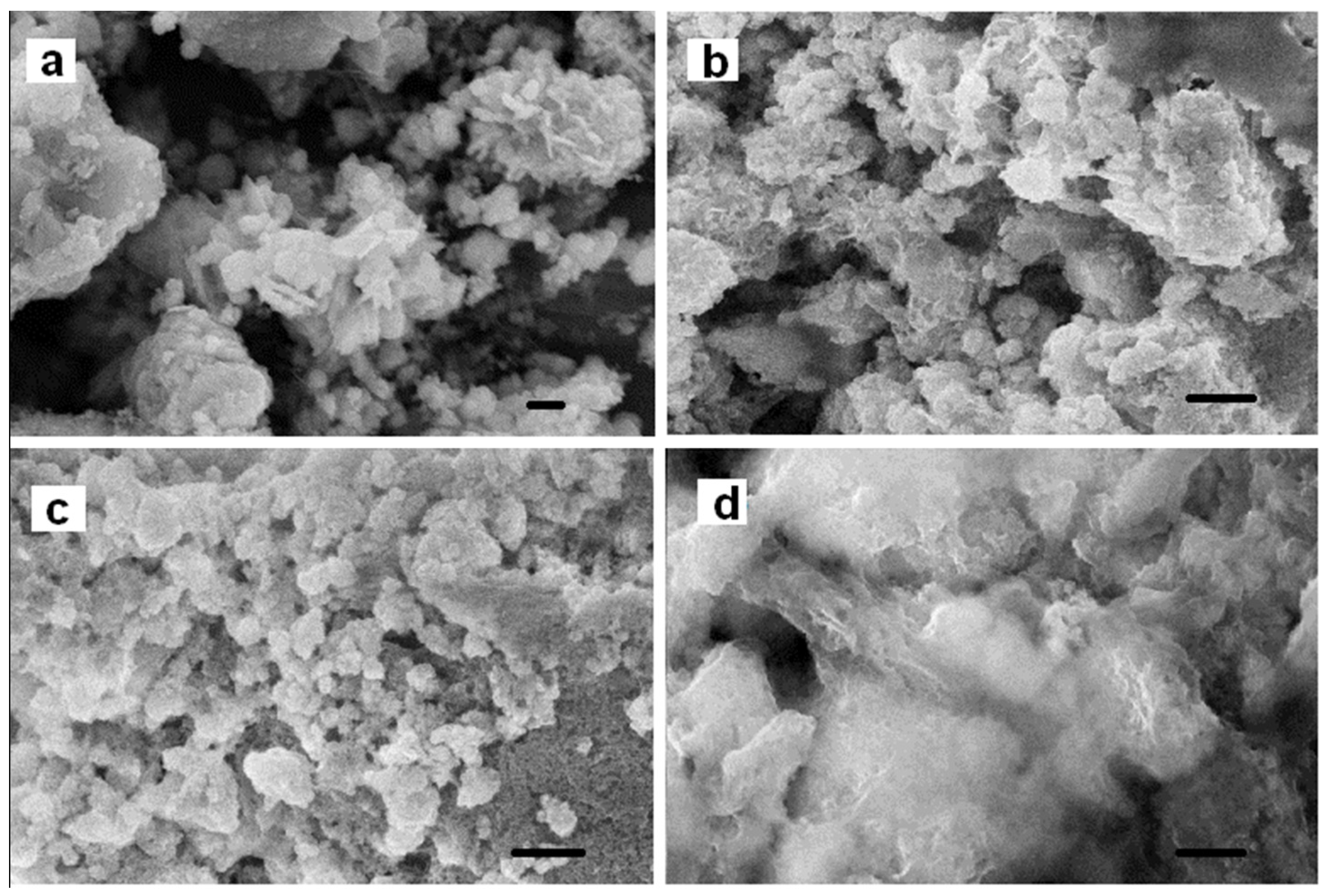 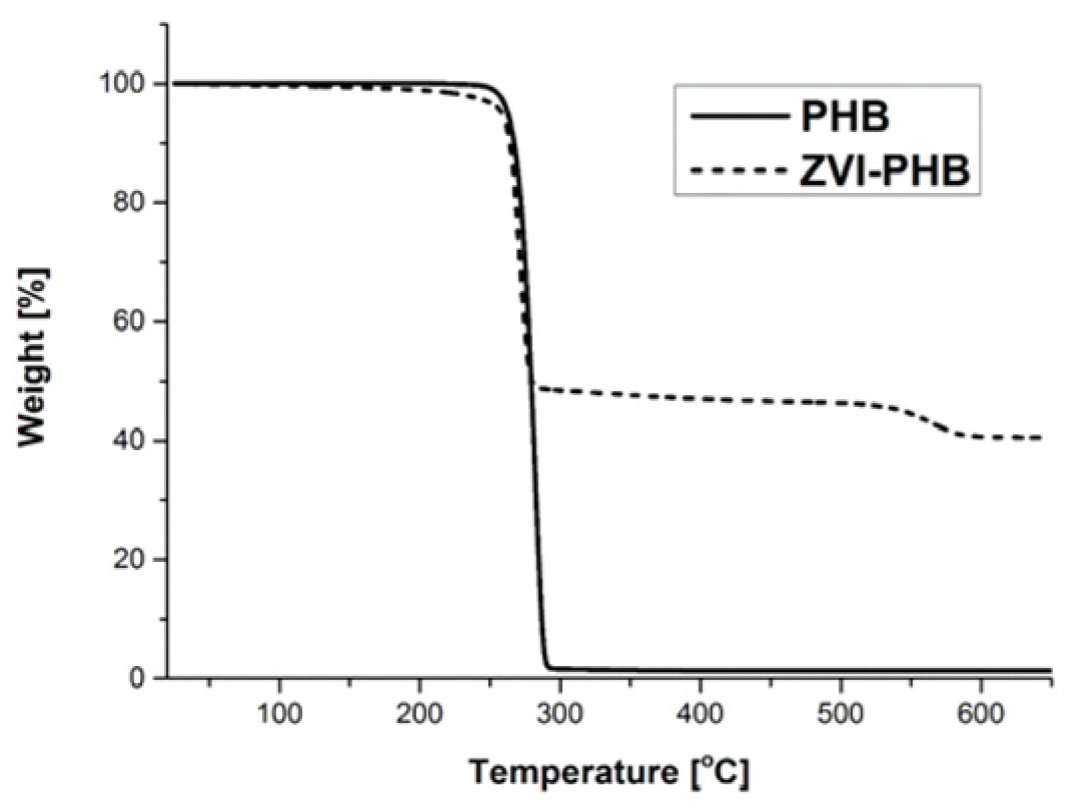