This work deals with the design of a three-phase grid-tied photovoltaic (PV) cascade H-bridge inverter for distributed power conversion. The power balancing among the phases must be properly addressed. In fact, an intra-phase power imbalance—arising from uneven irradiance and temperature conditions—generates a per-phase power imbalance. This latter can be compensated by the injection of a proper zero-sequence voltage, while the intra-phase balance is ensured by means of a hybrid modulation method which is able to guarantee the handling of unequal DC (Direct Current) sources, stable circuit operation, and maximization of PV power production. The digital controller is developed and tested in Matlab/Simulink environment integrated with XSG (Xilinx System Generator), thus allowing an easy transfer on a field-programmable gate array (FPGA) platform and accurately describing the behavior of a real hardware implementation. Thus, numerical results have been considered to prove the effectiveness of the proposed approach.
Keywords: distributed energy conversion; grid-tied multilevel inverter; modulation technique; photovoltaic power systems distributed energy conversion; grid-tied multilevel inverter; modulation technique; photovoltaic power systems

The three-phase topology of the multilevel CHB inverter analyzed in this paper is shown in Figure 1. As can be seen, it is made by N series connected cells for each phase leg. Each cell is a H-bridge inverter powered by a photovoltaic generator, where the PV generator can be either a single solar panel or a PV subsystem. The output waveform for each leg is the sum of the output voltages (vHi,p, with i = 1, …, N, and p = 1, 2, 3) of each H-bridge. An inductive filter L is exploited to filter the undesired harmonic components in the grid current.
The control strategy we propose has a twofold main objective: (i) adjusting the input voltage of each cell to track the MPP of the corresponding PV generator; (ii) driving only one cell at time in PWM mode in order to reduce switching losses.
The core of the control strategy is a specially-suited sorting algorithm that establishes which cell must work in PWM mode while the others are kept in a fixed state, the overall constraints being the sum of the input voltages (which must exceed the utility grid peak voltage) and the phase relation among the three legs.
The control algorithm compares the errors between the MPPT reference values and the voltages actually measured across each PV generator, with the aim of driving only one cell in PWM mode, while the others can be either connected or bypassed, according to the detailed analysis reported below.

From Figure 1, it can be argued that for a given voltage vpvi,p across the ith DC-link capacitor, the ith cell in the p-th leg provides an output voltage vHi,p which can assume only three values (0, +vpvi,p, −vpvi,p) depending on the state of the four switches Sis,p. Namely, vHi,p = 0 if either Si1,p and Si3,p or Si2,p and Si4,p are in the ON state; vHip = +vpvi,p when both Si1,p and Si4,p are ON; vHi,p = −vpvi,p when both Si2,p and Si3,p are ON. As a result, the AC vinv,p waveform is composed by 2N + 1 levels given by the sum of the voltages vHi,p.
In other terms, by assuming the switch states as binary signals (i.e., switch ON corresponds to 1, while switch OFF corresponds to 0), the AC voltage vinv,p across the p-th phase can be written as follows: where the modulation factor hi,p can assume three possible values (+1, −1, 0). It is worth noting that in conventional modulation approaches, the cells are either all modulated (as in the phase shifted PWM) [20,38,39,40,41], or none are modulated (as in the level-shifted modulation) [21]. Differently from those approaches, only one set of the modulation factors h is being modulated in our algorithm, so that (1) can be written as where K identifies the only cell driven in PWM mode during each control cycle. The +/− sign in the sum depends on whether the corresponding h is kept to 1 or −1; the remaining N-K cells do not appear (i.e. h = 0). It can be noted from Figure 1 that the states defined by h = +/−1 correspond to the discharging of the DC-link capacitors Ci,p, while h = 0 makes the capacitor to be charged by the PV source. Whether the sign is + or - depends on whether vinv,p is in the positive half cycle or in the negative half cycle, respectively.
In order to write the open loop state equations for the control problem, it is possible to replace hi,p with a continuous switching function bounded in the interval [−1, +1]; thus, each leg current iin,p injected into the grid can be straightforwardly related to the voltages across each cell:
The control is achieved by feeding back the state variables according to the schematic view depicted in Figure 2. Figure 2 can be viewed as a quite “standard” control cycle which provides the reference voltages for the three phases. For each phase, the outer loop adjusts the sum of the DC-link voltages vpv,i in accordance with the sum of the references provided by the MPPT blocks (these blocks—not shown in the figure—perform a standard Perturb and Observe (P & O) algorithm). Unfortunately, in order to ensure the overall stability of the CHB inverter, the tracking voltage should avoid the case that PV generators operate in the flat region of their I–V curve [42]. As a consequence, a lower boundary has to be defined, also ensuring a proper synthesis of AC-side multilevel waveform.
It important to note that the DC-link voltages vpv,i are obtained by digitally filtering the 100 Hz ripple, thus improving the quality of the inverter output current in terms of THD [20]. On the other hand, a proper sizing of the DC-link capacitors has been performed to limit the detrimental effect of the 100 Hz oscillation on the MPPT efficiency [1].
As can be seen, the first PI evaluates the reference currents for each phase, and, from them, the reference active powers .
In the inner loop, a multivariable PI controller [34] regulates both the direct and the reactive grid currents. To this end, the three reference powers given by the first PI are summed in order to get the direct current reference , while the reactive current reference can either be set to zero (in order to achieve unity power factor) or adjusted in order to control the reactive power. The adoption of a multivariable PI controller allows a simple implementation, while assuring fast dynamics and zero steady-state error for three-phase application.
Currents id and iq are achieved by converting the measured grid currents (abc coordinates) into dq coordinates. The outputs of the PI are the inverter reference voltages in dq coordinates, which are then converted to the three-phase reference voltages (abc coordinates); the synchronization of the dq transformation is performed by means of the phase-locked loop (PLL) circuit.
It is important to note that the independent MPP tracking performed for each cell may generate unbalanced phase power, thus inherently leading to unbalanced grid currents. In order to overcome this undesired drawback, a proper homopolar (zero-sequence) voltage component v0 is added to the direct sequence. Indeed, according to [43], for given power unbalances among the phases, defined as a voltage v0 allowing the inverter neutral point to move so as to have unbalanced inverter voltages (vinv,p in Figure 1), while assuring balanced grid currents, can be found in accordance with the following equations: where and φ0 are, respectively, the peak value and the phase of v0, while φ is the phase of the balanced currents.
The reference voltages provided by the control scheme of Figure 3 are then converted into the gate signal commands (Sis,p in (1)) for the IGBTs (Insulated Gate Bipolar Transistor) of Figure 1. This is the innovative core of the present work, because it is at this stage that (thanks to a proper sorting algorithm) it is dynamically decided which cell of each leg has to be driven in PWM mode. Indeed, as is shown in Figure 3, the reference signal entering the PWM block depends on the index K, already defined in (2). The detailed description of the sorting algorithm is given below.

According to (2), vinv,p can be synthesized by adding up the output voltages vHi of K-1 cells (by permanently connecting them) plus one cell in PWM mode, while the others are kept in the zero output voltage state. The new idea is to determine—in every control cycle—the state of each cell depending on the voltage error between the reference given by the MPPTs and the filtered actual vpvi,p.
The algorithm is sketched in Figure 4.
The pairs are sorted in ascending order with respect to the voltage error, thus assigning the last position, N, to the cell with the highest positive error, while the first position, 1, is occupied by the cell with the lowest negative error (it is worth noting that the position in the sorted vector is not related to the position in the physical circuit). Then, according to the new order, the voltages are added until the index K that makes true the following inequality is found:
The index K is the one already defined in (2); therefore, the first K-1 cells of the sorted vector (i.e., the cells with the lower voltage errors) have to be kept in the ±1 mode (discharging mode), the K-th cell has to be driven in PWM mode, and the last N-K cells (i.e., the cells with the higher voltage errors) have to be kept in the 0 mode (charging mode).
It should be noted that the modulation strategy is specially conceived for the CHB with unequal DC sources, exploiting small differences in the voltage of the individual power cells to reduce switching losses and improve the converter efficiency [19].

This work presented a new modulation approach for a three-phase CHB inverter aimed to perform distributed energy conversion, with single-panel MPP tracking capability, along with reduced switching device power dissipation. In order to achieve this latter goal, only one cell operates in PWM mode, while the others are kept in either “charging” or “discharging” mode, depending on the distance between the actual operating point and the references determined by individual MPPT blocks.
The reliability of the proposed approach has been evidenced by means of both Matlab/Simulink® and PSpice analysis, showing the capability of system to take all relevant parameters under control: power factor, balance of the currents, solar panel maximum power points, and dynamic power losses.

M.C., F.D.N. and P.G. conceived and designed the simulation set-up and performed the numerical simulations; G.B. and A.D. analyzed the data; D.I. and S.D. wrote the paper. 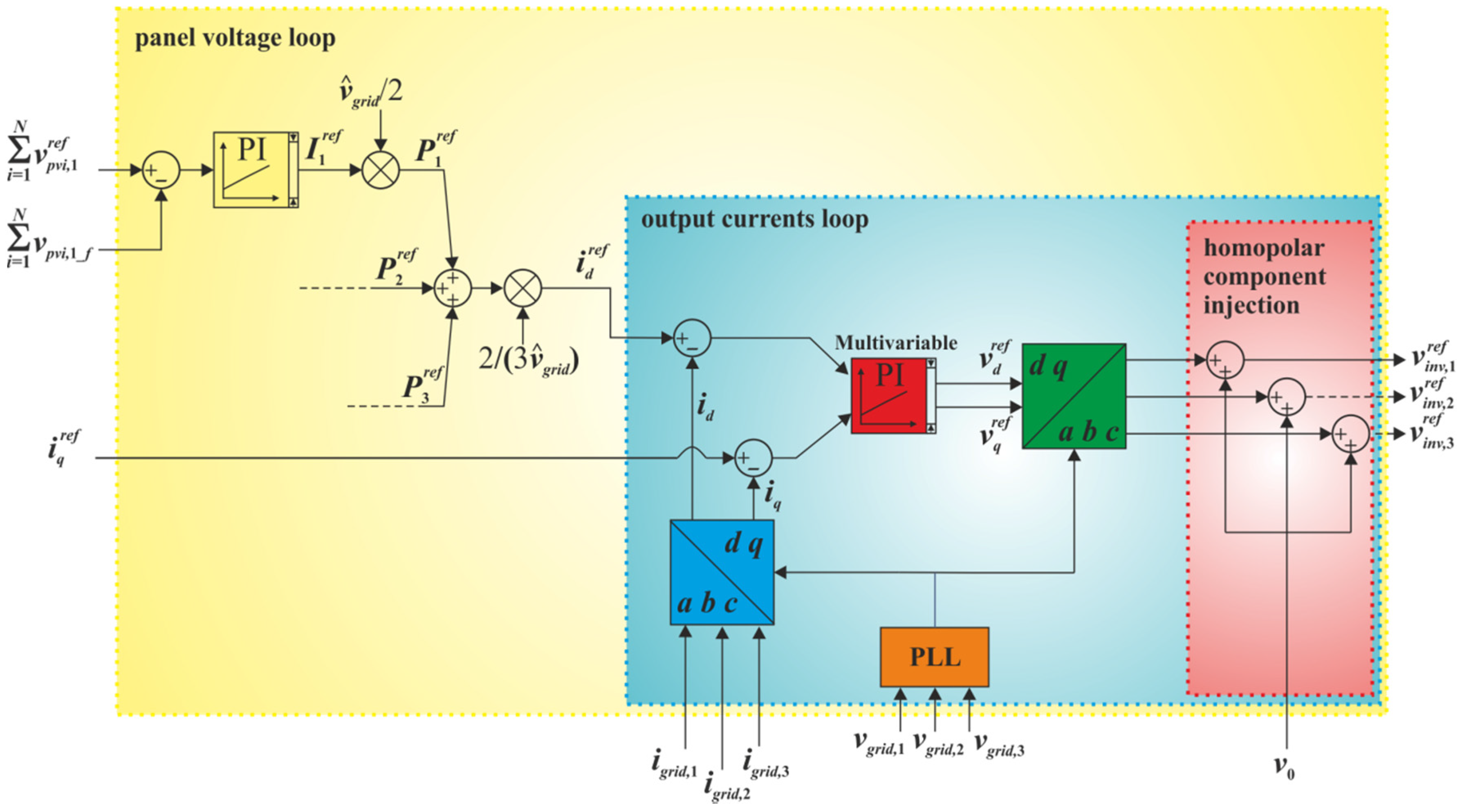 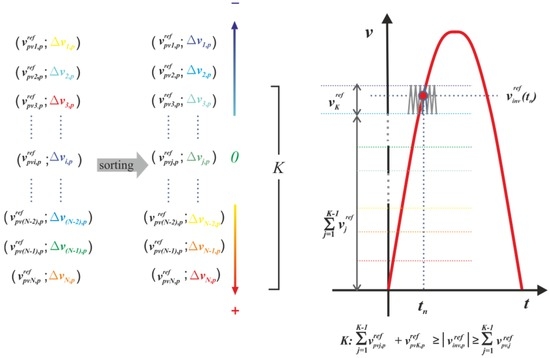 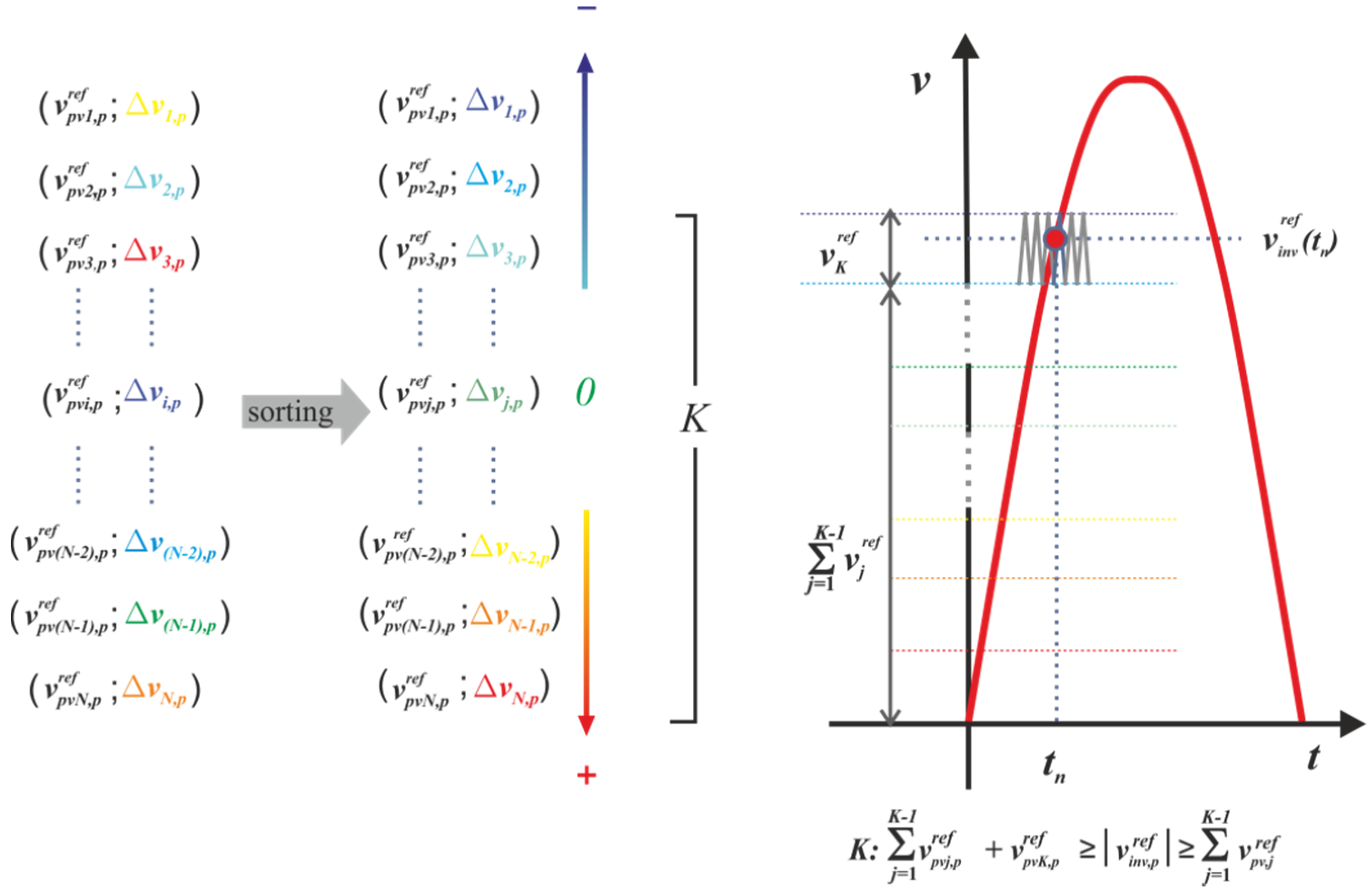 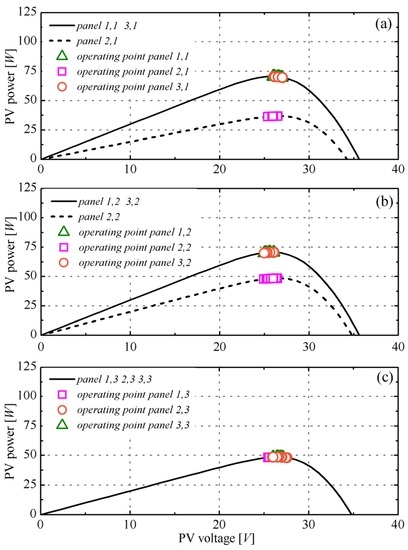 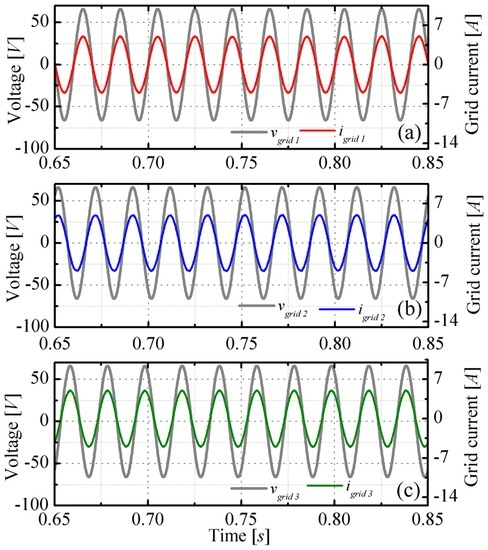 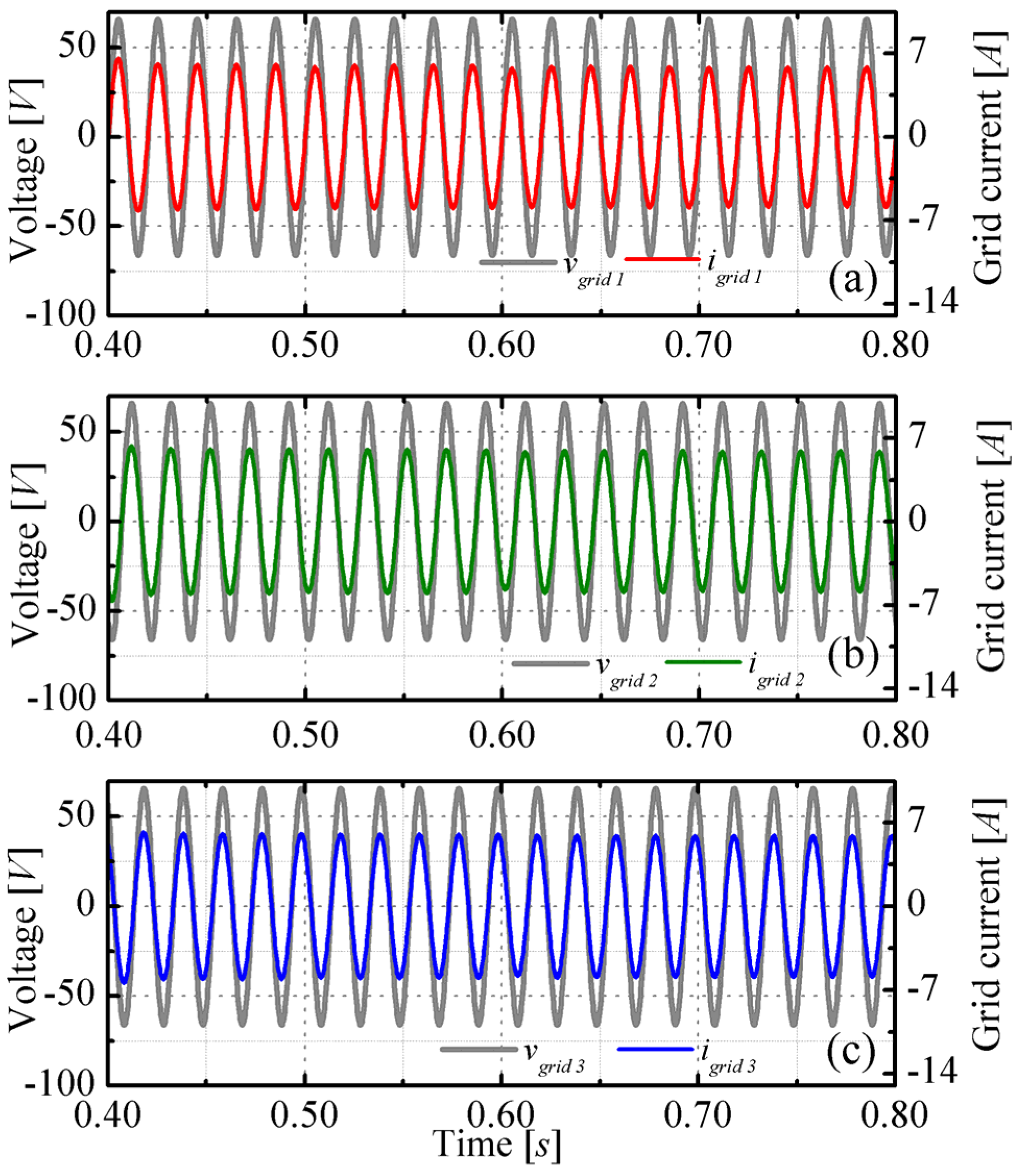 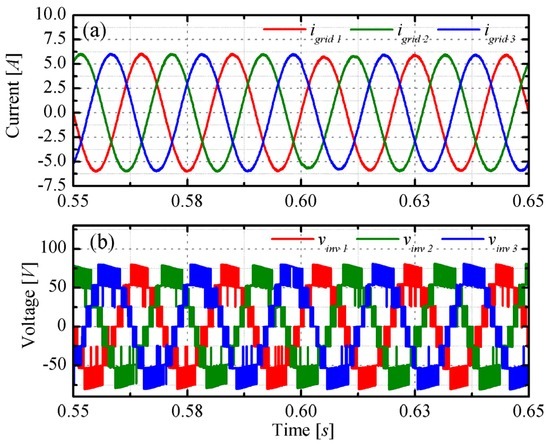