The robot assessed in this paper is the autonomous APR-02 three-wheeled omnidirectional robot, which was initially devised as a mobile telepresence platform [24]. The inclusion of an onboard high-end computer in the following prototypes allowed the development of autonomous applications, e.g., supporting and guiding older people with mobility impairments [25], and an early gas leak detection system [26]. The main characteristic of this assistive mobile robot [27] is the use of an omnidirectional motion system based on three optimal omnidirectional wheels [28] driven by three brushed direct current motors (BDCM) [29]. The odometry of the robot is calculated from the information provided by the encoders of the motors. The advantage of a three-wheeled against a four-wheeled omnidirectional motion system is the avoidance of wheel slippage [17,30].
Figure 1 shows some images of the APR-02 mobile robot completing a displacement. The trajectory of the mobile robot is controlled by a target motion command [30] that defines: the translational velocity of the motion (); the angular orientation of the planned motion (), defined in a complete range from 0° to 360°; the angular rotational speed of the base of the mobile robot () while performing a displacement; and the time duration of this motion command (), which can be replaced by a target distance displacement. The path planning algorithm of the mobile robot periodically updates the target motion command every 300 ms. The maximum value of the time duration () is always lower than 500 ms as a kind of watchdog security measure to stop the mobile robot automatically in case of malfunction of its central processing unit. This omnidirectional mobile robot is able to move in any angular orientation () without having to perform any previous maneuver, also being able to rotate over itself while moving [30].
The determination of the ground truth trajectory of the mobile robot is based on the application of SLAM [31] to the precise information gathered from its onboard Hokuyo UTM-30LX 2D LIDAR, which is placed horizontally or tilted down [32] depending on the expected surrounding environment. The practical disadvantage of using a high-precision LIDAR is its high cost. There are also other cheaper positioning alternatives that have been proven useful for kinematic calibration [33] and in the application of mobile robots intended to operate in the presence of dynamic obstacles, such as people [34].

The calibration trajectories used in this paper are the same 36 representative benchmark trajectories proposed in [17]. These trajectories were proven useful for improving the odometry of a three-wheeled omnidirectional mobile robot [17]. The motion commands required to generate the calibration trajectories are listed in Table A1 of [17]. These benchmark trajectories define a characteristic flower-shaped figure that is representative of the motion capabilities of an omnidirectional mobile robot.
Table 1 lists the information registered by the APR-02 mobile robot while performing a calibration trajectory defined by a motion command , executed over a predefined distance or time. The path-planning algorithm of the mobile robot converts this target motion into the target angular rotational velocities to be applied to the three PID controllers [29] that supervise the motors of the robot. The main information registered in Table 1 is the complete sequence of angular rotational velocities of the wheels measured during a displacement, . This information is used by the mobile robot to compute the odometry in real-time, but the registration of this information allows future offline re-computation of the odometry with a different inverse kinematic matrix (allowing its calibration). The APR-02 also estimates its position by applying SLAM to the 2D scans provided by its onboard LIDAR. This real-time information is stored as the reference ground truth trajectory followed by the mobile robot during the experiment, along with the scans provided by the LIDAR sensor for future offline analysis.

2.4. Dataset of Training and Validation Trajectories

3. Procedure for Genetic Algorithm Calibration of the Inverse Kinematic Matrix

The non-parametric procedure used in this paper to calibrate the inverse kinematic matrix of the APR-02 mobile robot is based on the multivariate search capabilities of genetic algorithms [35]. This nature-inspired search is used to recompute the odometry of the mobile robot offline (Equation (1)) with the information registered while completing a trajectory. The application of a genetic search iteratively finds a local unconstrained minimum of an objective cost function in a multivariate search space. Figure 4 shows a diagram describing the genetic algorithm search, which is started from an initial population that defines a starting point in the search space and then performs a bounded search.
The initial population of the search is the theoretical value of the inverse kinematic matrix defined in Equation (3). This is interpreted by the genetic algorithm as a population vector, , that defines the ninth-dimensional search space:
The upper and lower bounds ( and ) of the GA search were configured to allow a ±10% variation of the values defined in the initial population .
The iterative search performed by genetic algorithms requires the computation of a cost function to evaluate the performance of each population proposed during the search. This cost function is the same one used in [17] to compare the previous reference parametric calibration results [17] with the non-parametric calibration presented in this paper. This function is defined as: where is the number of trajectories used to compute the cost function (the 180 trajectories included in the training dataset); represents an individual trajectory completed by the mobile robot; is the location of the mobile robot estimated by applying SLAM to the scan provided by the onboard LIDAR while completing the trajectory ; identifies the last scan provided by the LIDAR when the robot reaches the end of the trajectory; is the location of the mobile robot estimated with the internal odometry using the current values of the inverse kinematic matrix ; identifies the last odometry evaluation obtained when the robot reaches the end of the trajectory; is the final angular orientation of the mobile robot.
This cost function formulation was used to calibrate the effective kinematic parameters of an omnidirectional mobile robot by Savaee et al. [14]. This cost function apparently applies the same weights to the distance and angular error obtained at the end of the displacement. However, this perception is incorrect because an error in a specific angular orientation of the robot affects the estimation of the subsequent trajectory cumulatively (see Equation (1)). Therefore, any error in the intermediate estimation of the angular orientation has a huge potential cumulated weight in the computation of the cost function.
At this point, note that this cost function is computed using only the ending position of the mobile robot. Therefore, the evaluation of this cost function only requires: (1) the last position of the ground truth trajectory estimated with the SLAM procedure (computed while completing the trajectory) and (2) the last location estimated with the odometry using the inverse kinematic matrix defined by the current population analyzed in the iteration. This offline computation of the odometry requires all the information provided by the encoders during the displacement; this is why each trajectory registered by the mobile robot also includes the information provided by the encoders.
Finally, the iterative search performed by the genetic algorithm stops if the average relative change in the best population found of a cost function is less than or equal to 10−6, which is the default value used in standard GA searches.

The exact or theoretical value of the inverse kinematic matrix () of the APR-02 mobile robot can be computed analytically from Equation (1) as [17]:
Figure 5 shows the evolution of a sample trajectory followed by the APR-02 mobile robot: the red line displays the ground truth trajectory estimated with SLAM [31] and the blue line the odometry computed using the theoretical value of the inverse kinematic matrix. As could be expected, Figure 5 shows differences between the ground truth trajectory and the odometry due to the existence of systematic odometry errors. At this point, note that the inverse kinematic matrix of a three-wheeled omnidirectional robot is very sensitive to any inaccuracy in the implementation of the parameters of the motion system [17]: radii of the wheels , the distance between the center of the robot and each wheel (), and the angular orientation of each wheel in the mobile robot frame (). In any case, the effects of the systematic errors are best evidenced in a mobile robot performing curved trajectories (Figure 5) rather than straight trajectories [17]. In the case of an omnidirectional mobile robot, the difference between a curved and a straight trajectory depends only on the target angular rotational speed, which is the parameter in the motion command, .

4.2. Reference Parametric Optimization of the Inverse Kinematic Matrix (from [17])

The authors declare no conflict of interest. The funders had no role in the design of the study, in the collection, analyses, or interpretation of data, in the writing of the manuscript or in the decision to publish the results. 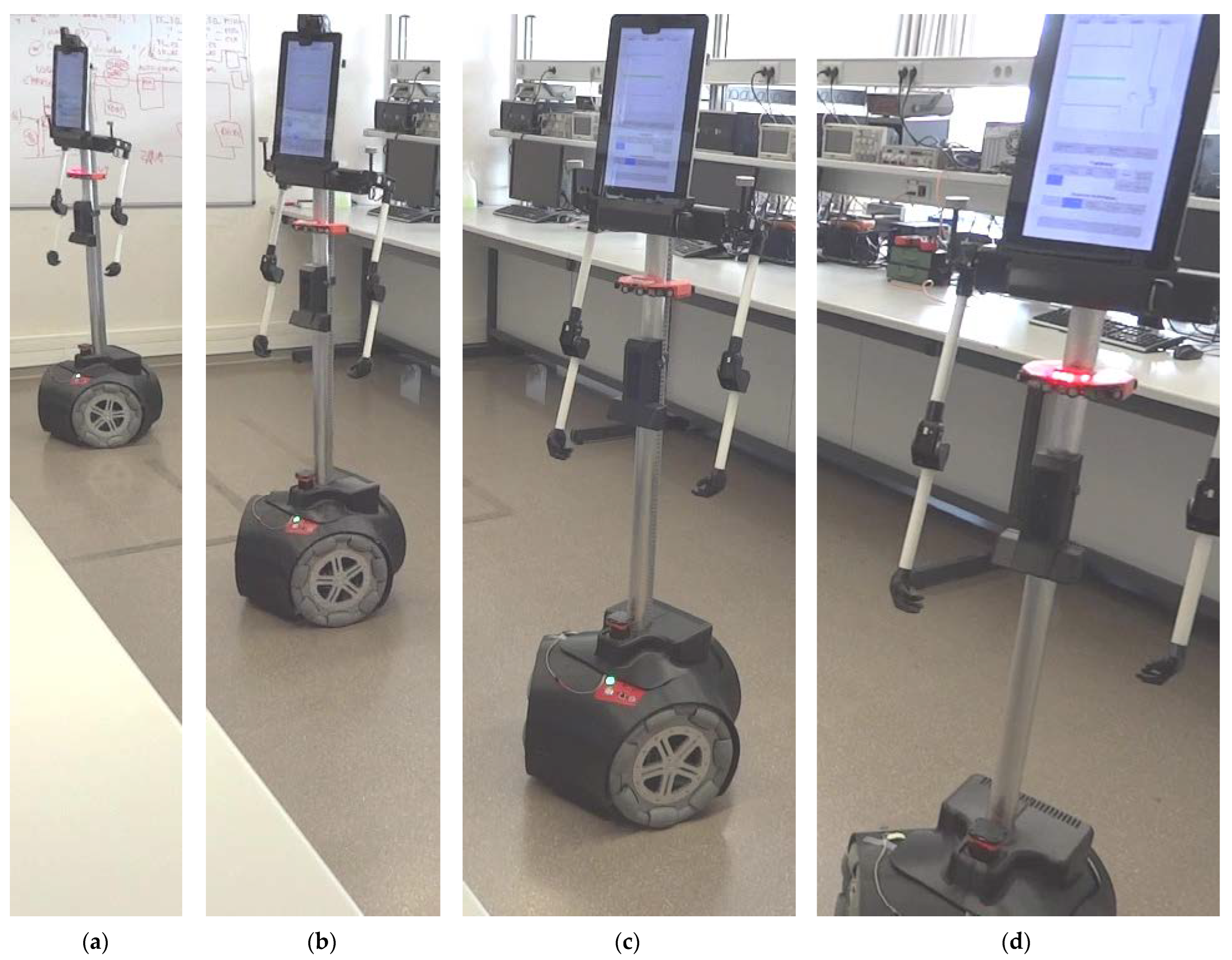 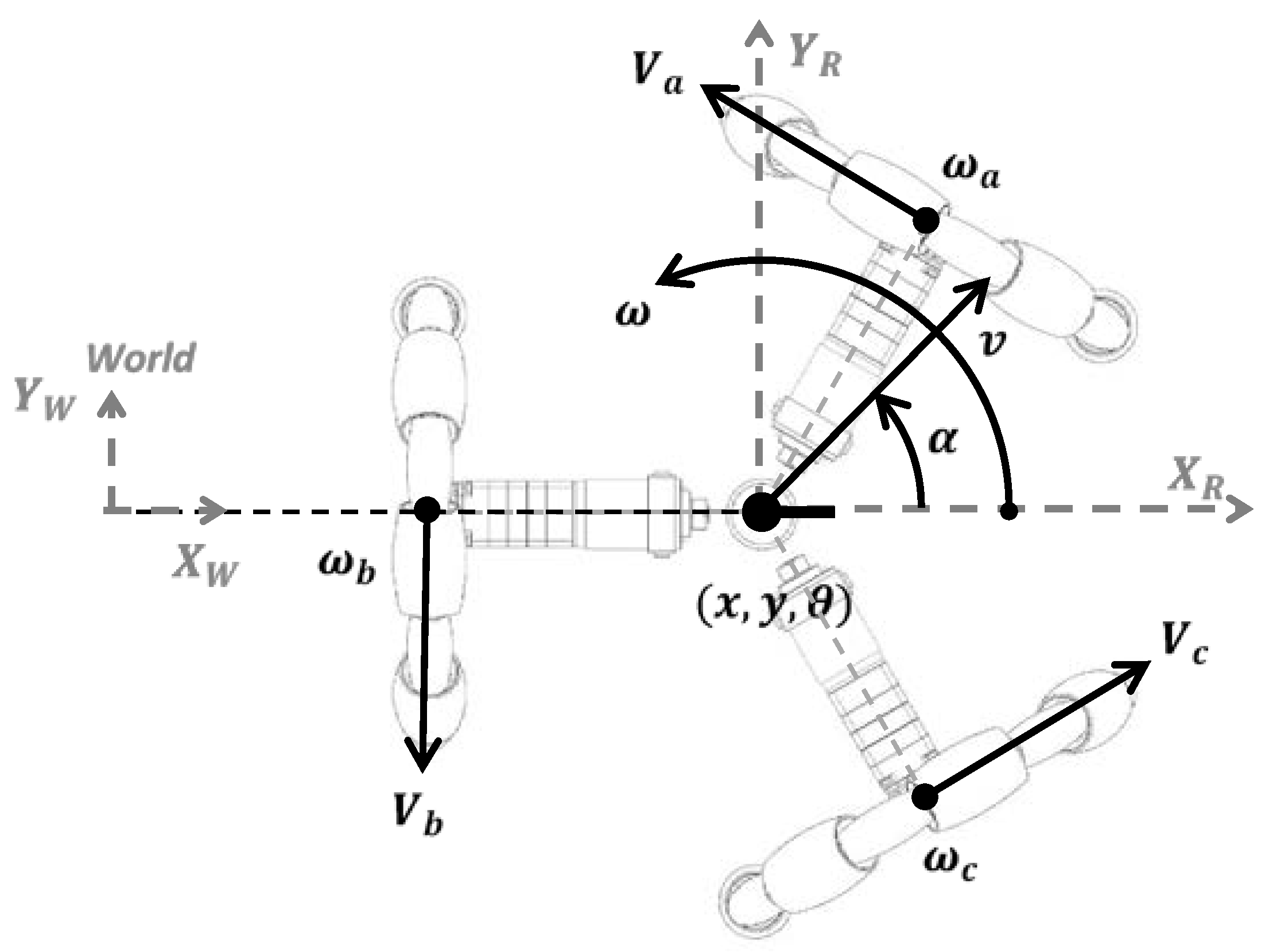 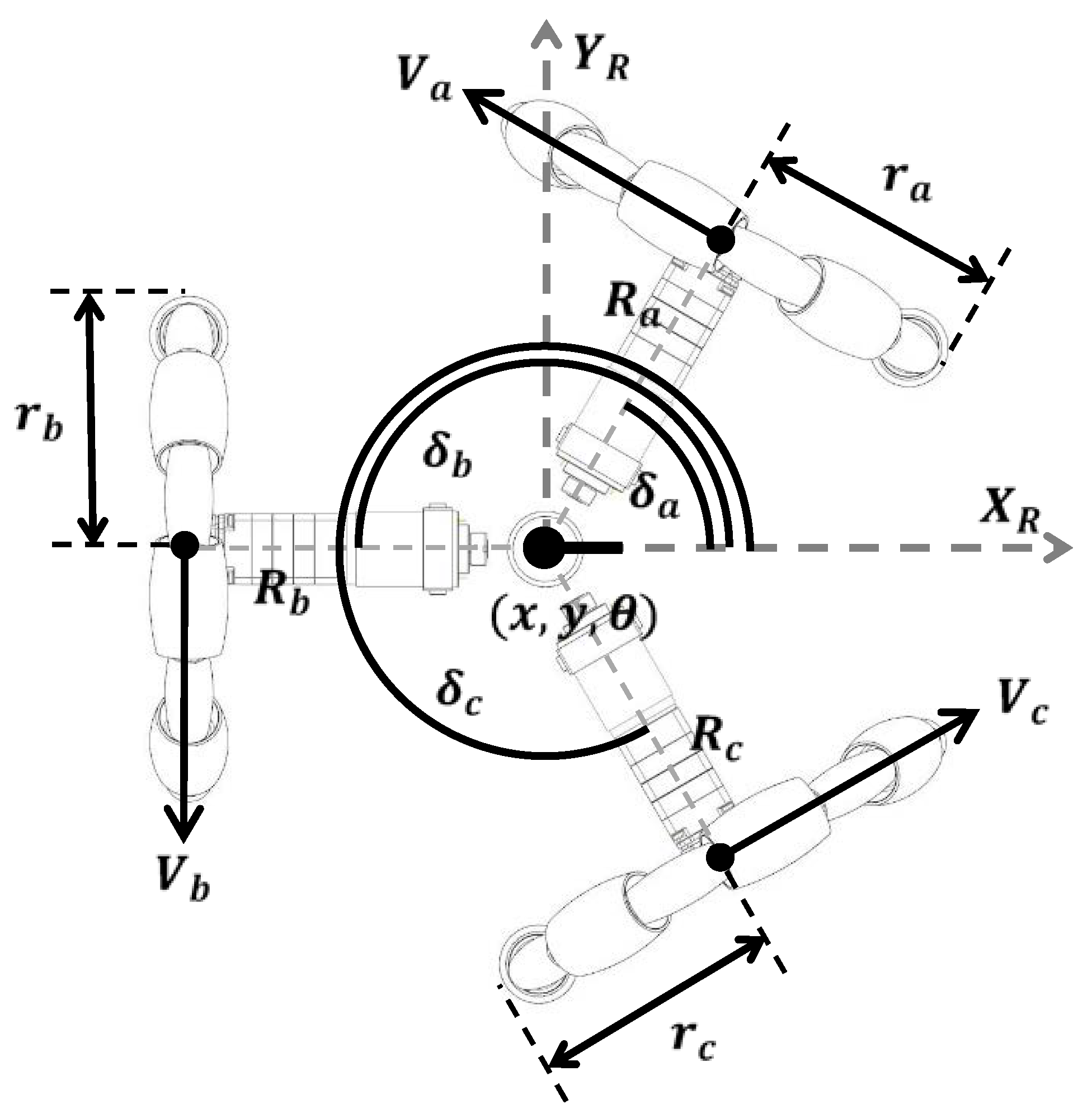