The microbial contamination of both fuels and engine oils has been the subject of many past studies. At the same time, this problem is still valid and has become more and more popular as an area of research. Studies have shown that microbial activity can be detrimental to the operation of various modes of transport [1,2,3,4,5]. It is important to prevent microbial contamination that can occur in petroleum products. Microbial contamination can be prevented through proper cleansing, decontamination, or by chemical methods. Another method of protection against microbial contamination is the use of specialized coatings on fuel tanks [6].
One means of combating harmful organisms are commonly used synthetic or natural compounds, i.e., biocides. Cleaning agents are also used during fuel storage to help reduce the amount of water in the tank. Currently, for the sake of environmental protection, it is necessary to develop new methods to prevent the growth of harmful microorganisms in engine oil. When developing methods of eliminating the phenomenon of the microbiological contamination of petrochemical products with the use of ecological measures, it is necessary to take into account both the structure and the phenomena occurring in the supply systems and the lubrication of machine elements [7,8,9].
Ecological methods of improving the performance parameters of engine oils may include the addition of effective microorganisms [10,11,12,13,14], i.e., a set of cultures of naturally occurring, non-genetically modified microorganisms; these are specially selected, microscopic organisms found on Earth. These microorganisms are used, among others, in industry, medicine, horticulture, and also in environmental protection. Another environmentally friendly measure involves the use of silver [15]. This element has long been used for protective and healing purposes. It is also applied in filters, and to clean the air of microorganisms and water in closed spaces, e.g., on airplanes. The method of silver ionization contributed to the enhancement of the disinfecting effect of this element. Silver ionization, as with copper ionization, has found application in the qualifying selection of some bacteria [16,17,18,19,20]. Silver is also used in the form of nanosilver. This article presents a study of the influence of additives commonly recognized as environmentally friendly on the water content in new and used oil.

One of the tasks of engine oils is the reduction of friction between the surfaces of two moving and interacting elements of mechanical devices. Lubricating oils consist of a base oil and an active ingredient. The base oil gives typical characteristics to the lubricating oil, and the actual performance is determined by the active substances that improve the base oils in terms of resistance to oxidation, corrosion protection, wear protection, as well as wetting and emulsifying ability [21,22,23,24,25,26,27,28,29,30,31].
The problem is water bound in the lubricating oil. Water in oil comes in three forms: dissolved water, emulsified water, and free water. The point at which the oil cannot absorb more dissolved water is called the oil saturation point [32]. If more water enters the oil, the excess water will appear as separated water or an emulsion. Generally, if the saturation point is exceeded, the oil changes to a milky appearance. The water amount in the oil depends mainly on the additive package, operating temperature, pressure, and the quality of the base oil. For example, a highly refined oil with few additives will withstand a small amount of water before being saturated, around 100 ppm at 21 °C. On the other hand, an ester-based oil can withstand 3000 ppm of water at 21 °C and above [31,32,33]. Water contained in oil systems deteriorates the rheological properties of the working fluid used, reducing its lubricating and insulating abilities. Water in oil reduces the possibility of the transference of bearing loads, accelerates the processes of oil oxidation, rinses out improvers, increases the amount of deposits, and causes corrosion.
Water promotes the aeration of oil, which causes a foaming problem and has a negative effect on oil improvers, causing them to undergo the process of hydrolysis or be washed out [34,35,36].

3.1. Materials Used in the Research

The water content of new and used oil with and without any additives was tested using the Cou-Lo AquaMax KF automatic titrator for water content determination in accordance with the Karl Fischer method. This device (Figure 3) uses the coulometric titration technique to ensure the repeatable and reliable measurement of the water content from 1 ppm upwards. It uses the technique of the precise generation of iodine into the system as a result of electrolysis, taking place in a very tight measuring vessel with the lowest level of moisture penetration from the outside, i.e., the so-called “drift”. The selected parameters of the Cou-Lo AquaMax KF automatic titrator are shown in Table 1.
New and used oils with liquid and ceramic effective microorganisms, silver solution, and colloidal nanosilver, were used for the research, wherein 2.5 mL and 5 mL of additives per 100 mL of oil, and three or six pieces of ceramic tube with diameters of 9 mm and heights of 11 mm were added to the samples.
In order to obtain the results of the water content of the oil itself and of the oil with additives:
There is a platinum charge-generating electrode in the measurement system, which is responsible for the release of stoichiometric amounts of iodine into the system (with a ceramic diaphragm), precisely, optimally, and according to the following relationship: the 10.71 coulomb charge generated in the system releases the amount of iodine that balances the content of 1 mg of water. The AquaMAX KF device works according to the rules of coulometry and determines the water content of the sample by coulometric titration until the end point is reached. The end point means that free iodine appears in the system. Stoichiometric: 1 mole of water reacts with 1 mole of iodine. This means that 1 mg of water (0.001 g) is equivalent to 10.71 electric coulombs (1C = 1A × 1s). The device determines the water content in the tested sample by measuring the total amount of charges generated as the sum of the electrolysis current needed to produce the required amount of iodine in the system to bind the water contained in the tested material [50].

The data used to support the finding of this study are available from the corresponding author upon request. 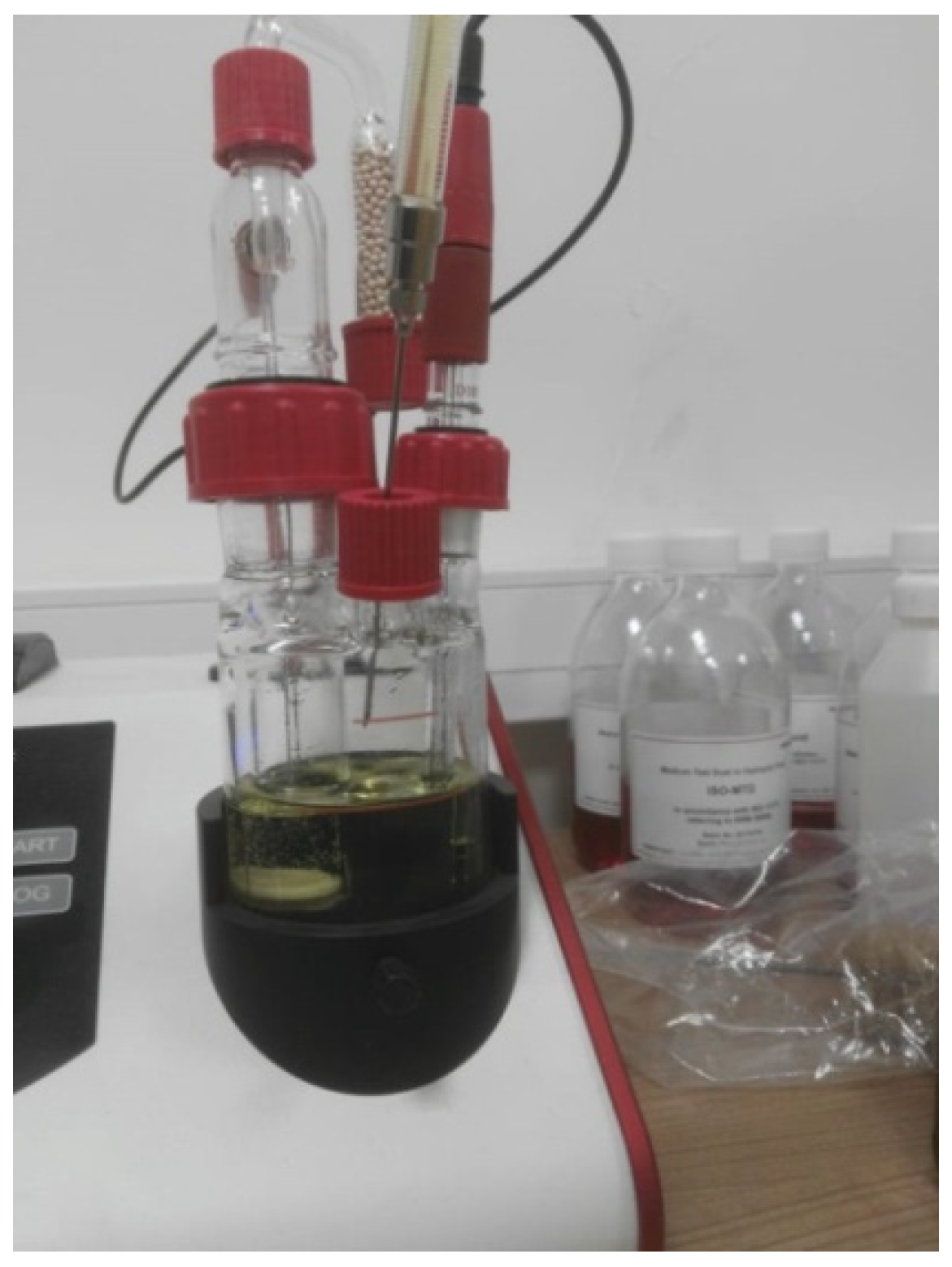 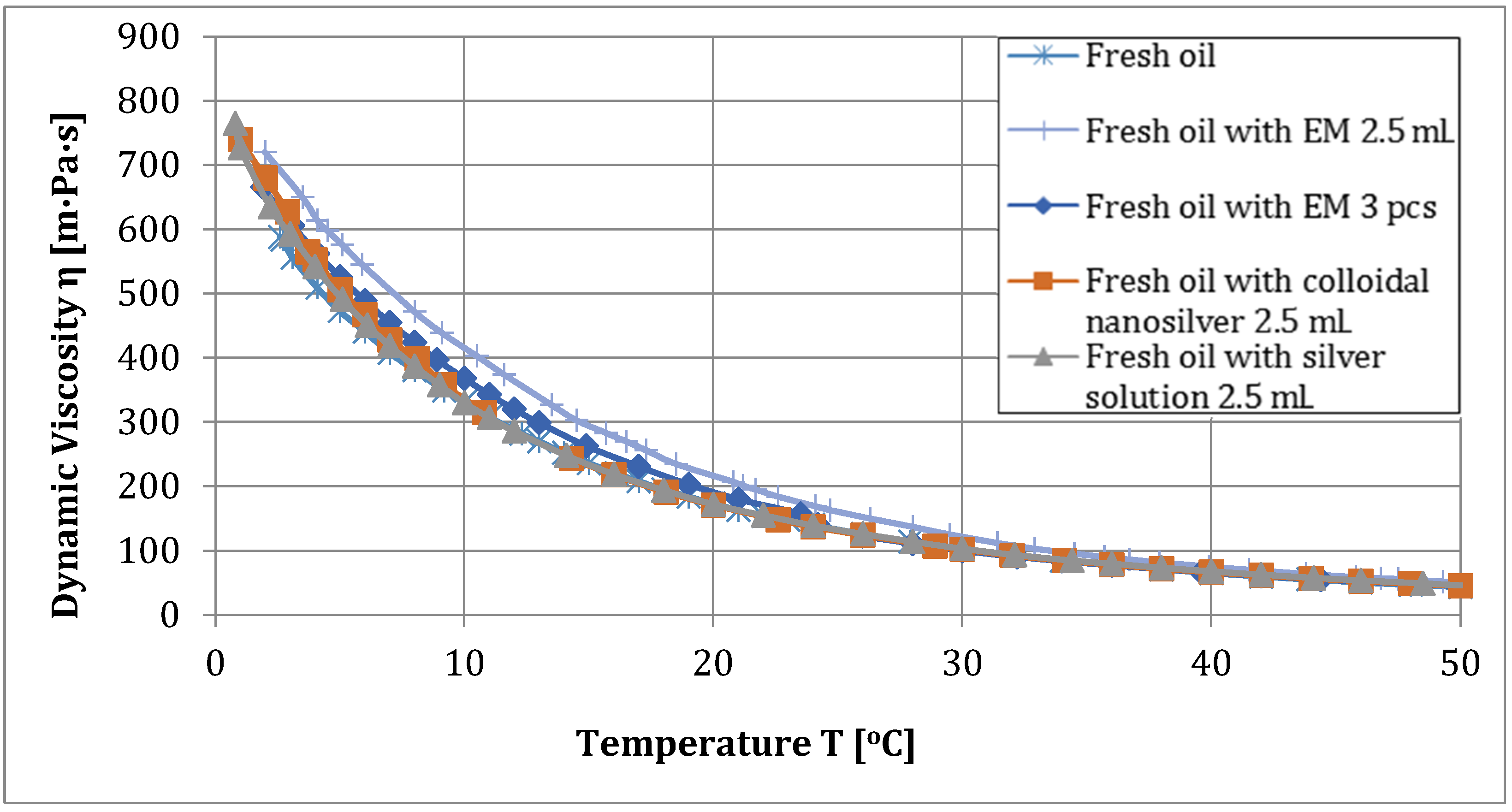 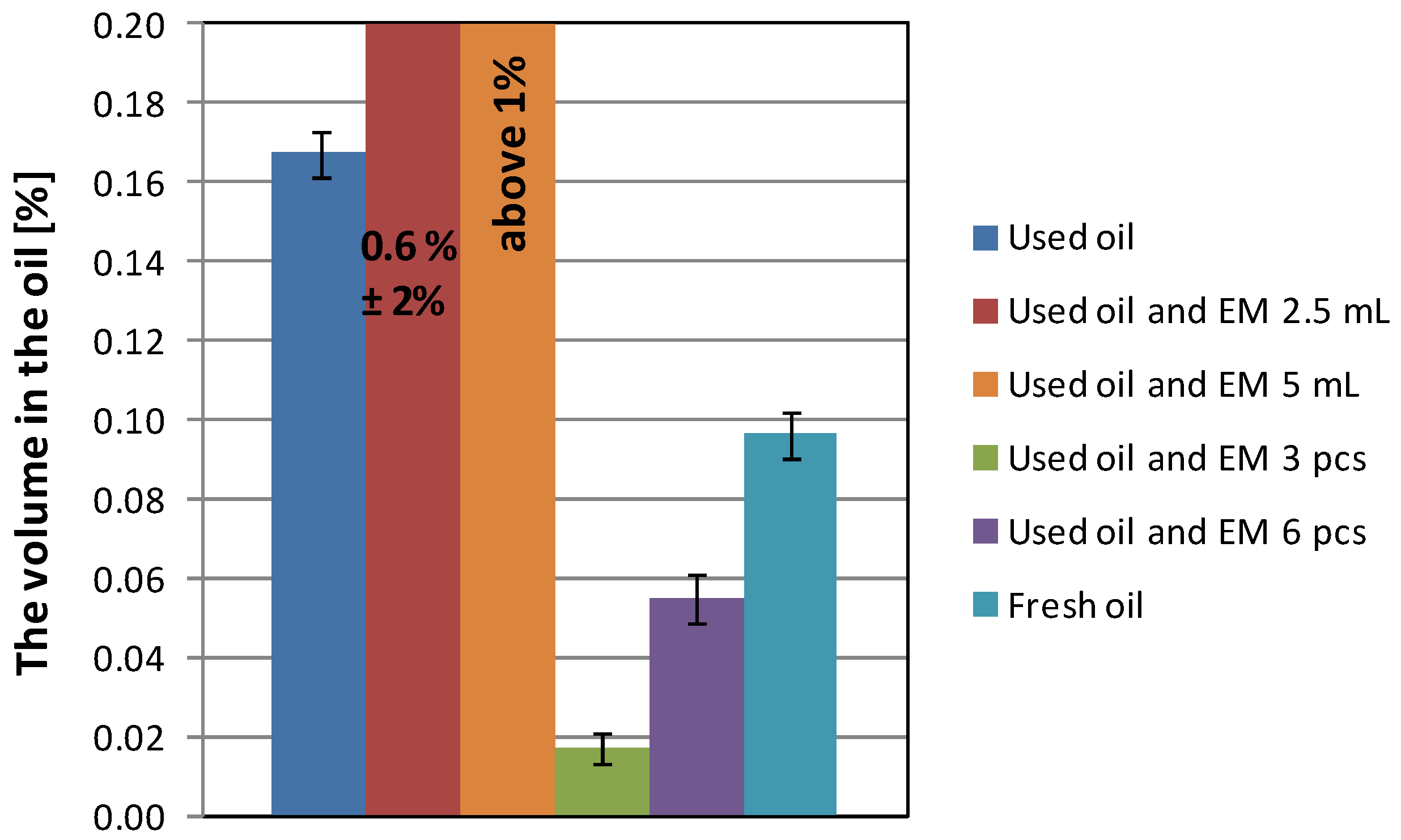