Effect of Granulometric Composition of the Soil on the Occurrence of Carrion Beetles (Coleoptera: Silphidae)

Taxa of epigeic insects belonging to the carrion beetle family (Coleoptera: Silphidae) are associated with the presence of carrion [1,2,3], which constitutes a valuable but unstable source of nutrients for them. Carrion is usually subjected to rapid changes under the influence of biotic (scavenger animals, bacteria, and fungi) and abiotic (e.g., temperature and humidity) factors. Therefore, rapid burying of carcasses by carrion beetles reduces potential competitors [4,5] and preserves food.
Soil granulometric composition is an important parameter of the soil of the habitat and is a key factor regulate soil physical properties. Content of sand, silt, and clay fraction regulate water movement, bulk density, porosity, plasticity, etc. For example, smaller particles (clays) having higher specific surface area than sand particles. These surfaces hold water through adhesion, exchange nutrients, and provide surfaces to which organic matter can attach. Sandy soils (>90% sand) have low specific surface area, resulting in large pores and high infiltration rates, whereas clay soils (>60% clay) have high specific surface area, resulting in small pores and low infiltration rates [6]. This factors can extremely affected occurrence of carrion beetles [7,8,9].
As demonstrated by Muths [7], the rate of carcass burying is influenced by many factors of which soil structure and moisture are of particular importance. For the occurrence and reproductive success of insects belonging to the subfamily Nicrophorinae, the physical properties of the soil appear to be of particular importance, especially for small species [1,8,9,10]. These species tend to prefer loose, moist soils rich in organic matter that are easier to penetrate. In such soils it is possible to bury carrion quickly and effectively. If the soil is too dense, insects cannot penetrate it. However, it need attention that soil that is too loose may not maintain the form of a hole (brood chamber—in the case of Nicrophorinae), leading to its burial and suffocation [11]. In turn, larger species prefer open areas where the soil is drier and sandier [8].
These relationships prompted us to undertake a closer examination of the relationship between the number of collected Silphidae (Silphinae and Nicrophorinae) and the physical parameters of the soil, in particular the percentage of soil mechanical fractions.

The study was carried out in various habitats of south-eastern Poland in 2009–2012 and 2014. The sites were located in Borek Stary (UTM EA73), Rzeszów (UTM EA74) and Widna Góra (UTM FA13/FA23) on 13 research localities (Table 1; Figure 1).
The research sites were located in Borek Stary covered habitats in areas used for agriculture but excluded from direct management (wasteland). There were two types of mid-field trees (sites 2 and 3) and mid-field balks (an unplowed strip) separating the cultivation of a mixture of cereals and pasture (site 1).
In Rzeszów, carrion beetles were collected at three sites. In suburban areas, i.e., in an area with a greater degree of urbanization, the selected research sites included wooded sites: Salix viminalis osier plantation (site 4), a cluster of trees and shrubs (site 5), and a city park (site 6).
The research sites in Widna Góra, like in Borek Stary, were located in agricultural areas. However, these sites were used economically and included: a potato Solanum tuberosum cultivation (site 10), the cultivation of Beta vulgaris, semi-sugar type of fodder beet; Zentaur Poly variety (site 11), Avena sativa, Hordeum vulgare, Triticum aestivum cultivated for forage (site 12), and a backyard orchard (site 13). Additionally, the study covered the mid-field balks adjacent to the above-mentioned crops (site 7, 8, and 9).

Soil samples were collected at all test sites and air dried after been brought to laboratory in room temperatures (21 °C) by 2 weeks. The granulometric composition was analyzed using the hydrometer method [12,13]. The division of soils into granulometric subgroups was based on the recommendations of the United States Department of Agriculture (USDA) [14].

Modified Barber traps (Figure 2 and Figure 3) were used for catching the adult carrion beetles (Coleoptera: Silphidae). Four traps were set up on the test sites and were dug in line with the soil surface. Containers were filled one-third with ethylene glycol solution. The traps were covered with a plastic lid to prevent excessive contamination from rain and vegetation (e.g., falling leaves). On the roof, a bait was attached with a wire, it consisted of pieces of chicken weighing about 100 g. The trap was additionally surrounded with a metal mesh to prevent predators (e.g., foxes, cats, dogs, and birds) from eating the bait and destroying them. Holes in the metal mesh were approximately 2 cm, which allowed the beetles to pass into the trap with bait without thereby affecting the catchability of the insects. The same type of bait was used at each site, with an average weight of 100 g. The research was carried out from May to October. The traps were emptied on average every two weeks, and the preservative fluid was changed and a new bait was put out. The captured entomological material was then analyzed.

The systematic and nomenclature of the carrion beetles were adopted in accordance with the study by Löbl and Löbl [15], and the beetles were identified according to Mroczkowski [16] and Šustek [17].
To assess the biodiversity of the collected entomological material, the Brillouin species diversity index (Ĥ), the Margalef index (biodiversity index) and domination index (D = 1-Simpson index) were used. These analyses were performed using PAST 1.93 software [18]. The dominance classes were adopted from Górny and Grüm [19].
A chi-square test for the significance of the association was provided. The normality of the distributions was verified using the Shapiro–Wilk test. Based on the obtained results, a decision was made to select a specific type of test: parametric or non-parametric. The impact of environmental variables on beetle assemblages, which included physical parameters (weight percentage of individual fractions in earth parts) was determined by using two tests. Pearson’s linear correlation test (r Pearson) was used for the analysis of the examined traits with normal distribution. In the case the distributions of the examined features deviated from the normal, the non-parametric Spearman rank correlation.
All the necessary analyses were performed in the PQStat ver. 1.8.0.488 (PQStat Software 2020, Poznań, Poland) and Statistica 10 software package (Statistica software V 10.0, StatSoft Inc., Tulsa, USA).
PQStat Statistical Program version 1.6.2 [20] and Statistica 10 software [21]. The significance level (the maximum permissible probability of making a type I error) was set at α ≤ 0.05.

The results of the granulometric composition for soil samples from the test areas are presented in Table 2 and Figure 4. The following mineral deposits were found: (i) silt loam (SiL)—sites 1–5, 7–11, and 13; (ii) silty clay-loam (SiCL)—site 12; and (iii) sandy loam (SL)—site 6.

Figure 5 shows the five year (2009–2012, and 2014) beetle collection numbers. A total of 11,095 carrion beetles were collected.
The obtained specimens were classified into 13 species and 5 genera, which according to Löbl and Löbl [15], account for 59% of the Polish Silphidae fauna. In total, 876 samples were analyzed. Statistically significant differences were found between the number of specimens caught at individual sites (p < 0.05). However, no differences in the number of species were found (p = 0.9828).
Selected parameters of α-diversity and the results of fauna analysis for the sites, which were not included in the studies of Konieczna et al. [20,21] (sites 4 and 13), are presented in Table S1 and Figure S1.
The Brillouin diversity index (Ĥ), which is more sensitive to the overall sample size than the Shannon–Weaver index, ranged from 0.752 to 1.991 at the examined sites. The values of the Margalef’s diversity index, calculated on the basis of the natural logarithm (ln), ranged from 1.136 to 2.073 at the examined sites. Conversely, the dominance index ranged from 0.156 (site 2) to 0.628 (site 10).

3.3. Influence of Soil Granulometric Composition on the Occurrence of Silphidae

The project is financed by the program of the Minister of Science and Higher Education named “Regional Initiative of Excellence” in the years 2019–2022, project number 026/RID/2018/19.

Department of Agroecology and Forest Utilization, College of Natural Sciences, University of Rzeszów. 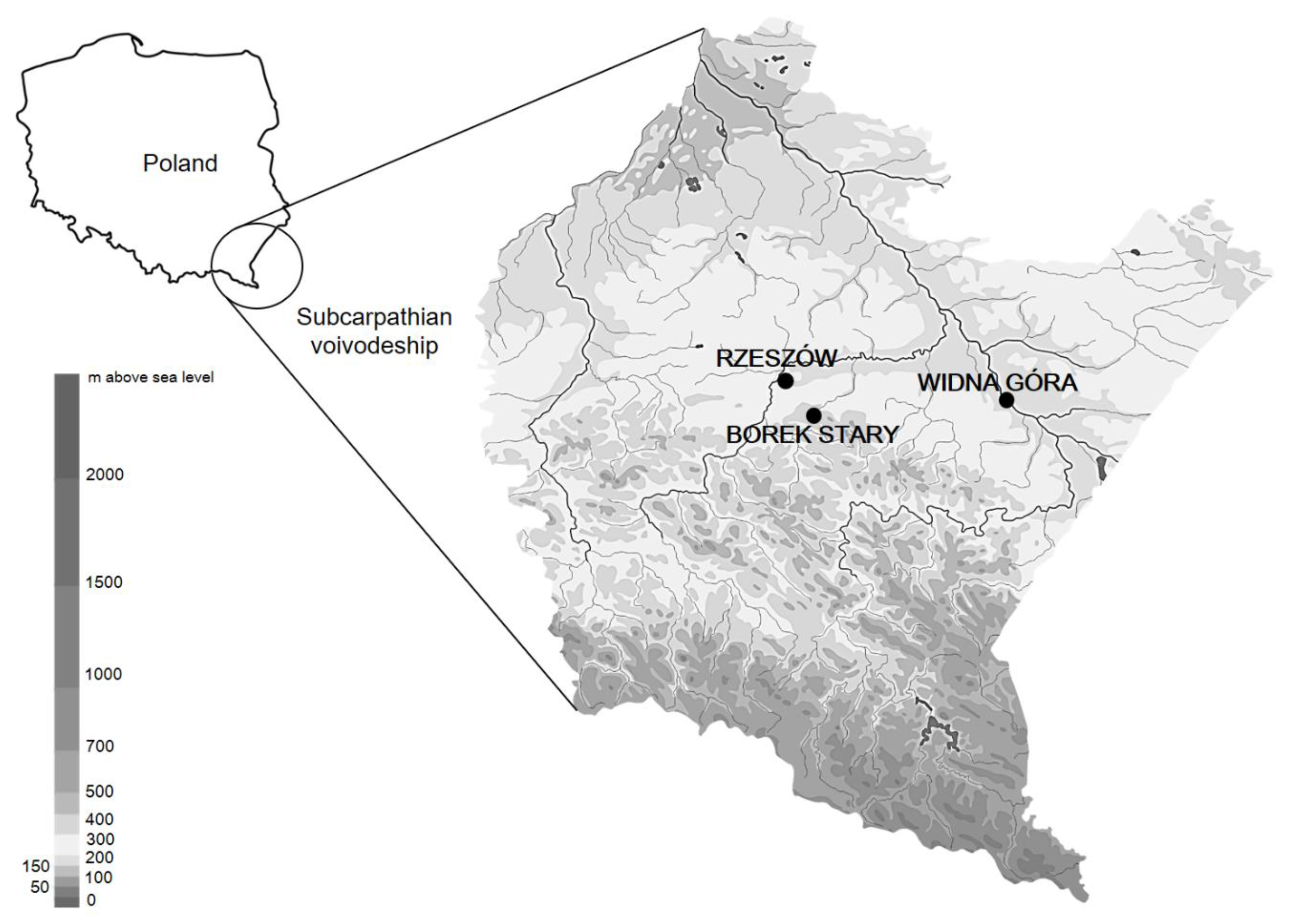