Recording a Hologram Transmitted over a Communication Channel on One Sideband

:
The paper presents experimental results on the recording and restoration of 3D holographic frames suitable for transmitting 3D holographic images with the frame rate required for TV images and a resolution of the Full HD standard and higher. The Patent RF No. 2707582 proposed a method for compressing holographic information and transmitting it using a procedure similar to SSB over conventional communication channels. In this work, the holographic information of a 3D portrait of a person, transmitted and received via the Wi-Fi communication channel, was restored in the form of a rainbow hologram, as one of a variety of holograms, by the computer addition of the carrier spatial frequency, and then hologram was actually produced on a photoresist. This technology can be used to create a holographic phototelegraph or, if there is a dynamic holographic display, to create a holographic television and 3D augmented reality.
Keywords:
optics; holography; rainbow hologram; holographic television; 3D augmented reality

2. Experimental Recording of a Rainbow Hologram at the Receiving End of the Communication Channel

A single-step scheme of recording a rainbow hologram is presented in Figure 2, while its version for recording flat colored images is shown in Figure 3. If several flat images are recorded according to the latter scheme, rotating the photographic plate around the vertical axis between exposures, each image will be reconstructed at its own angle during reconstruction, thus providing the parallax effect.
The image of holographed object 2, backlit by beam 1, which is coherent with 6, is transmitted to the photographic plate 5 through the filter 4 of vertical spatial frequencies so that, according to [24], S. Benton’s rainbow hologram is formed. Its speckle structure is extended along the vertical axis and has a complete set of horizontal spatial frequencies (Figure 4).
This hologram contains less information on the object because the vertical parallax is absent from it, and in the white light, it recovers a monochrome image, which is iridescent to the onlooker’s eyes moving vertically. Its appearance suggests that this hologram may be synthesized with the help of a set of columns composed of short, differently directed segments.
A colored image of the object may be obtained, for example, according to the scheme shown in Figure 3, where a slit source 3 with a random phase mask 2 forms an object wave on hologram 5, with the spatial modulation by mask 4. The latter is chosen from different spectral regions of the flat image to be recorded in accordance with Bragg angle θs, so that the reconstruction angle would be identical for any of the recorded waves [25].
Not only one, but several flat images taken at different angles may be recorded on a holographic plate (Figure 5).
These holograms, when irradiated with a beam analogous to the reference one, but with a wide spectral range, will reconstruct the images perceptible as those having a horizontal parallax; they may be considered one of the possible versions of colored 3D displays.
It is known that the development of a number of complicated optical–mechanical schemes implementing these colored displays on the basis of S. Benton’s rainbow holograms have been carried out over some time [26]. However, as a rule, a record of this kind would possess low angle selectivity for thin holograms and low diffraction efficiency because of the rapid exhaustion of the dynamic range of photoresponse. These disadvantages may be eliminated using the DotMatrix technology, in which a photographic plate is divided into a series of so-called holopixels, so that each of them is, in turn, composed of a set of j regions corresponding to the number of recorded incidence angles. A flat image of the 3D image at only one incidence angle is recorded on each j region in all holopixels. Irradiation of the obtained rainbow focused image holograms produces a stereo effect, providing a horizontal parallax of a series of approach angles of the colored images of the initial 3D object.
For the experimental recording of an SSB hologram in the rainbow hologram technology, we chose a KineMax MASTERING SYSTEM (Polish Holographic Systems, Warsaw, Poland) (Figure 6), in which a complicated set of optical elements was maximally replaced by the computer synthesis of the corresponding diffraction gratings.
Under objective 14, there is an area-mobile objective table onto which the photoresist is placed. The image of several gratings formed by the LC-SLM (Figure 7) is projected through objective 9 onto the corresponding region of the photoresist.
The hologram, as a whole, is recorded by moving the table and projecting a specific calculated set of spatially oriented gratings onto every region; the hologram is composed of a set of holopixels, each containing a region for each of the j images to be recorded (Figure 8).
One can see that the structures obtained through the calculation and composition of the vertical segments with the bands oriented transversely at different angles (Figure 8) are very similar to those obtained in the classical S. Benton’s scheme (Figure 4).

Other representations of the 3D holographic signal that are widely developed today, such as the point cloud technology mentioned above [6,7], polygonal [8,9] and voxel [10,11] representations of three-dimensional images, have extensive bibliography, which cannot be reflected in our article. We can only address review papers, for example [27,28]. In Table 1, we presented some of, we believe, the key stages of our development based on the creation of a mask using structured light, and the parallel development of our foreign colleagues based on the creation of a mask (surface map) using a time-of-flight (ToF) camera. We believe that the low resolution in the depth of the recorded scene is inherent in the ToF technology, since the operation of the electronics serving it must exceed 300 GHz per pixel for the high-quality registration of a 3D image of a human portrait. At the same time, the technology we are developing for using structured light does not have such strict limitations, and is much better adapted for transmitting 3D holographic images over distance. This also applies to portrait images in the TV standard of spatial resolution, with continuous parallax of the image depth, as well as with the TV frame rate.
In the present paper, the data from the holographic 3D object were actually transmitted by us through a Wi-Fi channel in the form of two frames (a mask and a texture, as shown in Figure 1), so it may be concluded that the cycle involving the recording of a 3D image of the object; its transmission through a conventional radio channel with the accepted TV frame rate; the synthesis of a rainbow focused image hologram, which is equivalent to recording flat holograms at 15 incidence angles; the reconstruction of a 3D image of the object; and the observation of the parallax in the image were all carried out successfully. This allows us to conclude that it is possible to transmit holograms in real time through conventional communication channels using a method similar to SSB. Thus, the possibility of implementing a holographic phototelegraph was confirmed experimentally. The authors hope that the data described in this paper will be useful for the developers of dynamic holographic 3D displays to solve the problems of visual reality and holographic TV.

The following are available online at https://www.mdpi.com/article/10.3390/app112311468/s1: Supplementary Video S1: Parallax of a 3D image reconstructed from a material hologram.

Data are available from the authors upon request.

The authors thank all reviewers for their helpful comments and suggestions. 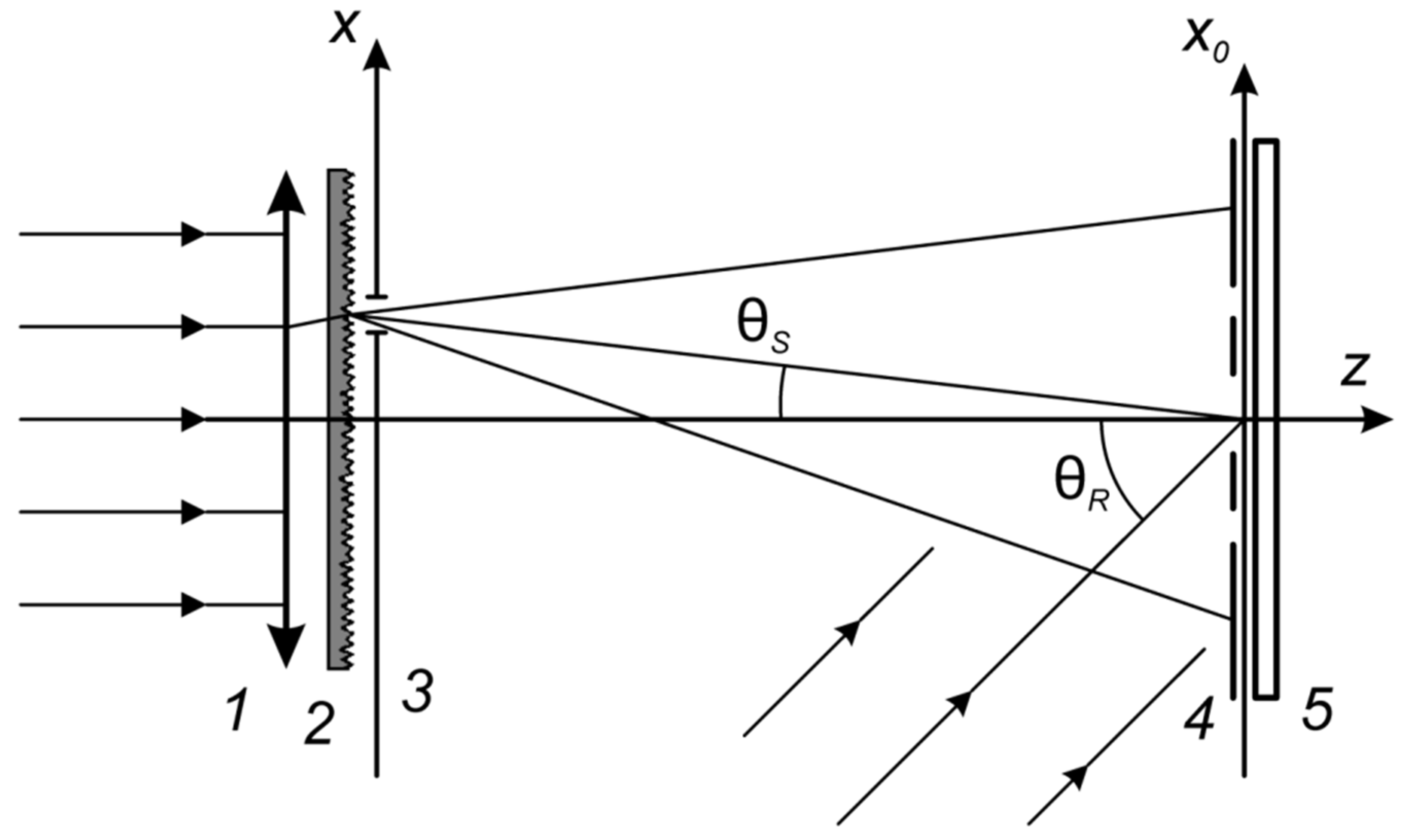 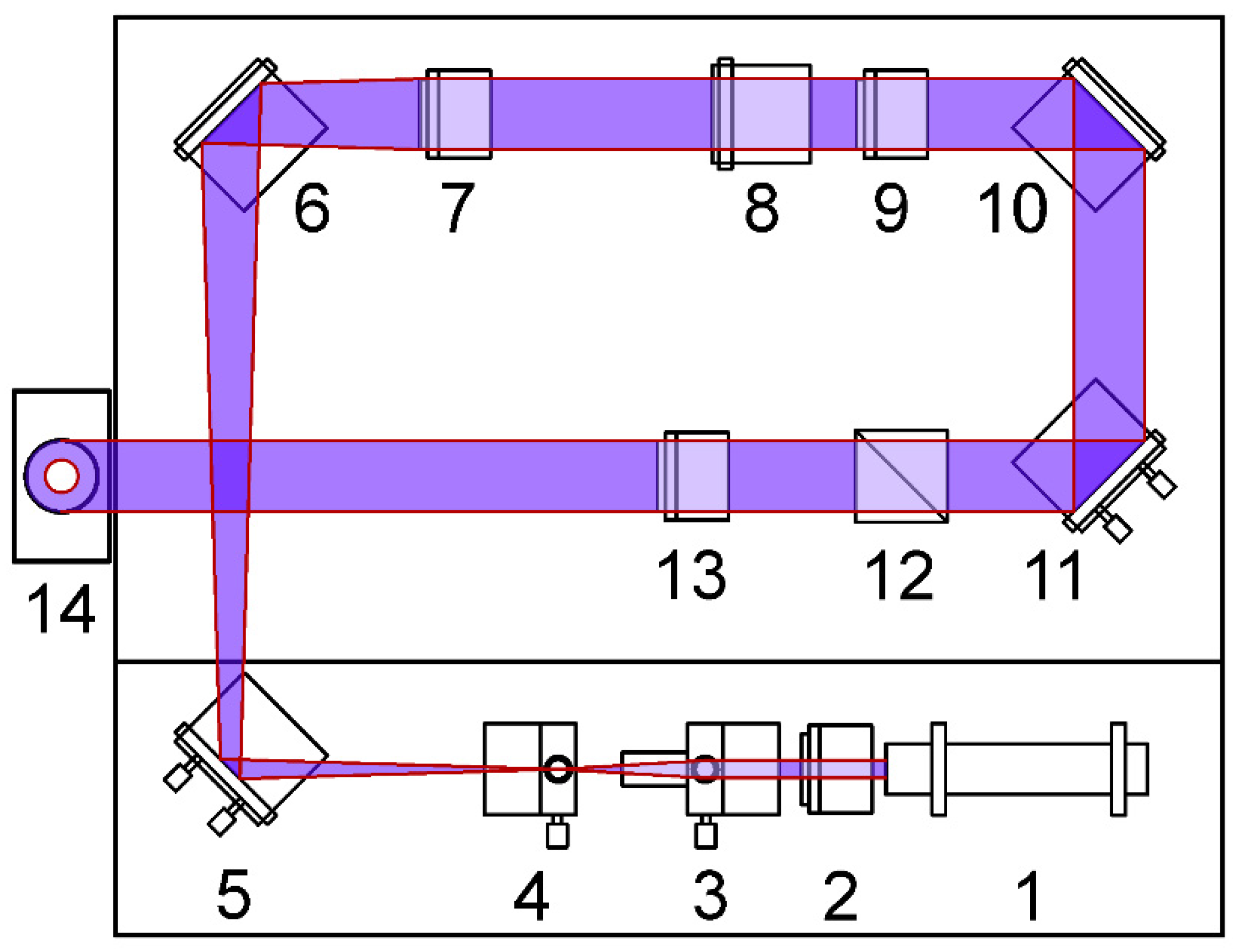 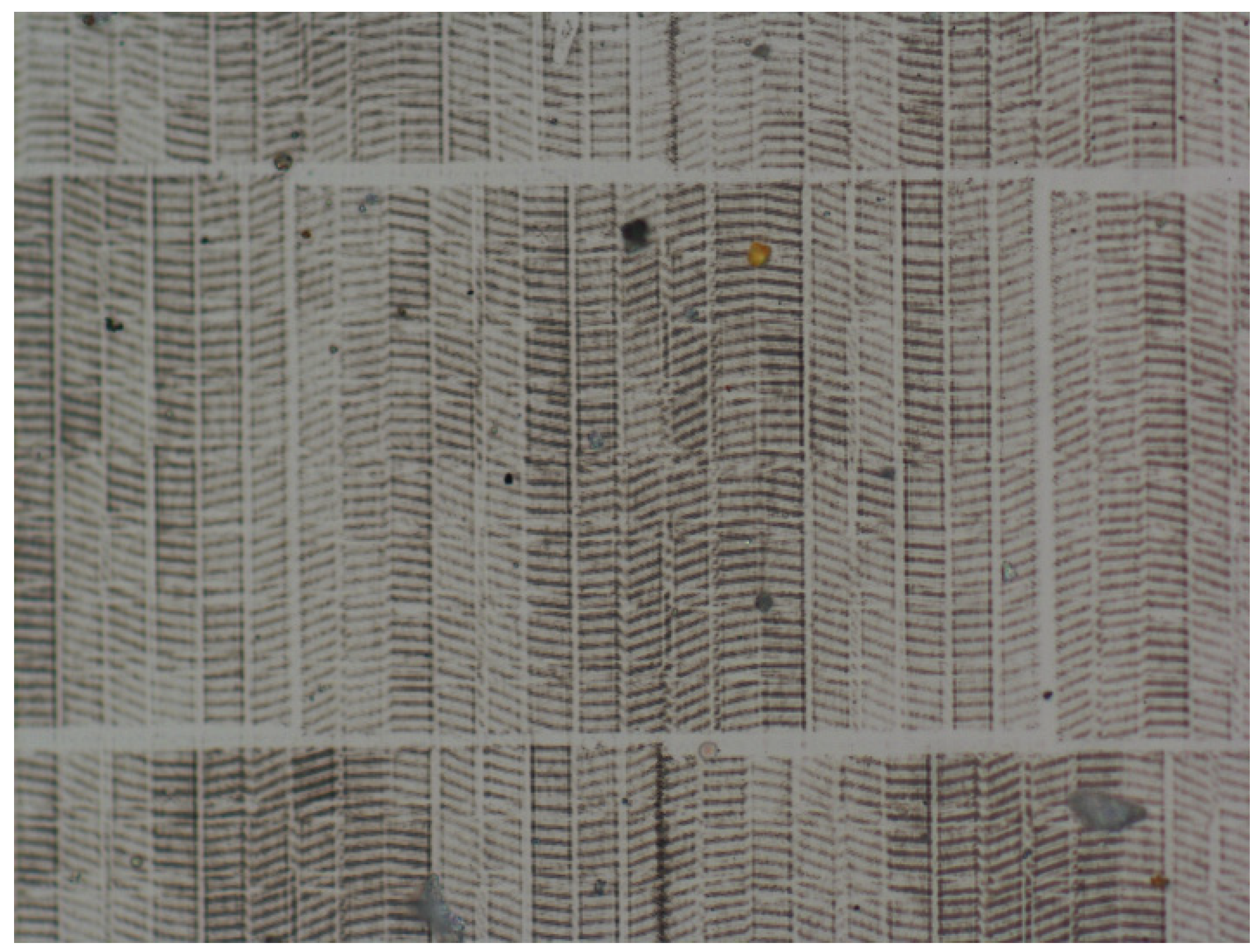 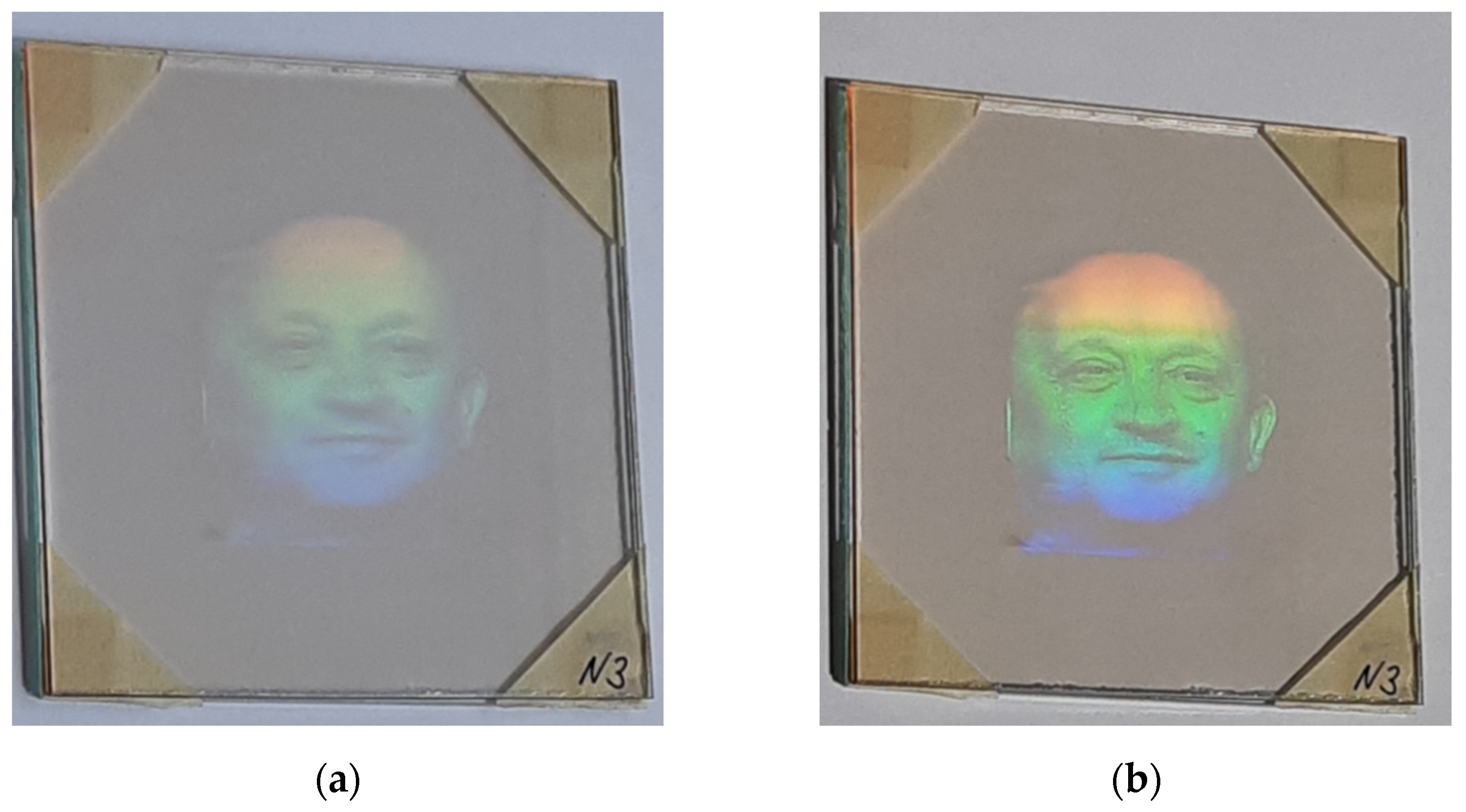 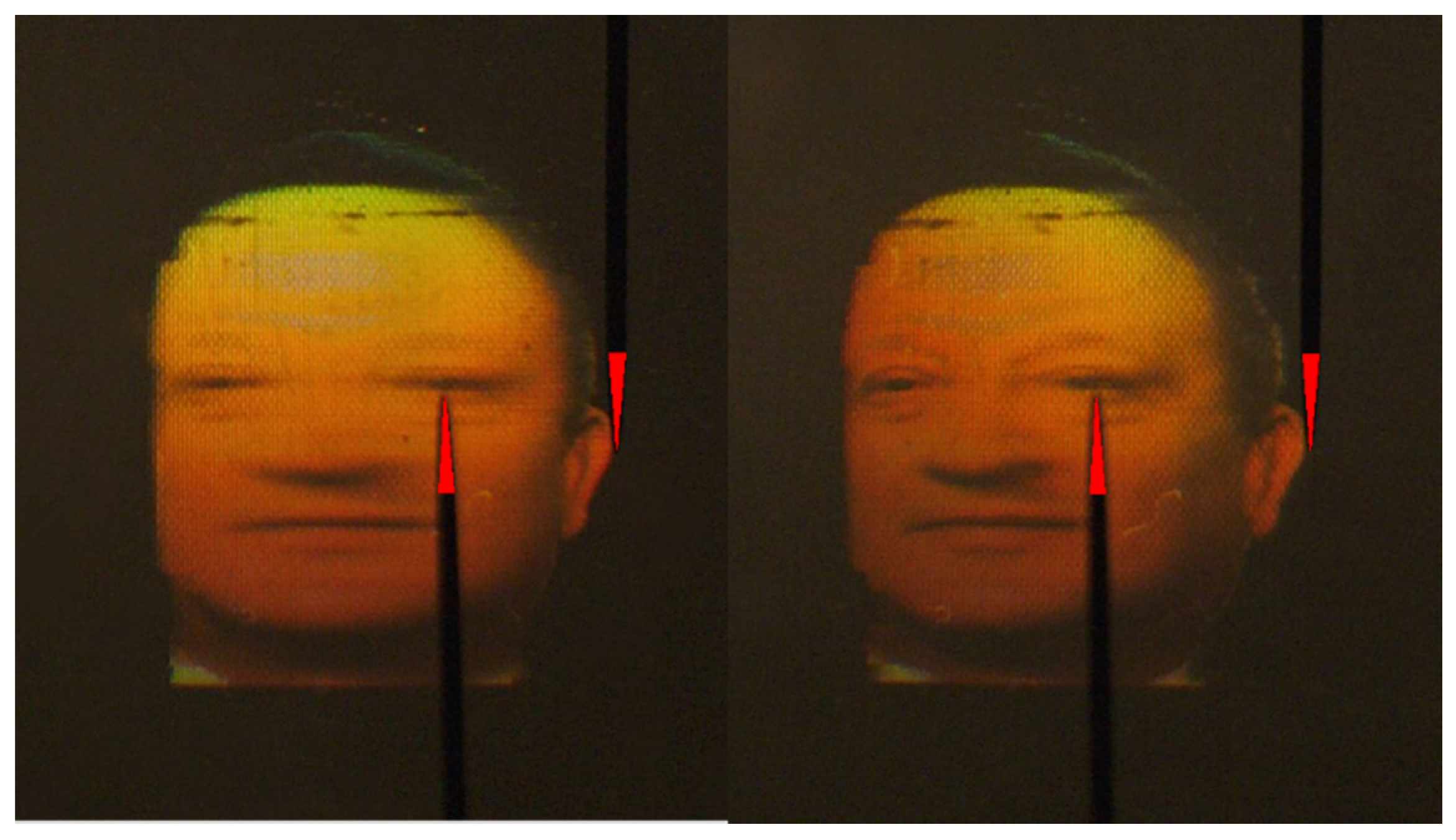