In the domain of functional magnetic resonance imaging (fMRI) data analysis, given two correlation matrices between regions of interest (ROIs) for the same subject, it is important to reveal relatively large differences to ensure accurate interpretation. However, clustering results based only on differences tend to be unsatisfactory and interpreting the features tends to be difficult because the differences likely suffer from noise. Therefore, to overcome these problems, we propose a new approach for dimensional reduction clustering. Methods: Our proposed dimensional reduction clustering approach consists of low-rank approximation and a clustering algorithm. The low-rank matrix, which reflects the difference, is estimated from the inner product of the difference matrix, not only from the difference. In addition, the low-rank matrix is calculated based on the majorize–minimization (MM) algorithm such that the difference is bounded within the range to 1. For the clustering process, ordinal k-means is applied to the estimated low-rank matrix, which emphasizes the clustering structure. Results: Numerical simulations show that, compared with other approaches that are based only on differences, the proposed method provides superior performance in recovering the true clustering structure. Moreover, as demonstrated through a real-data example of brain activity measured via fMRI during the performance of a working memory task, the proposed method can visually provide interpretable community structures consisting of well-known brain functional networks, which can be associated with the human working memory system. Conclusions: The proposed dimensional reduction clustering approach is a very useful tool for revealing and interpreting the differences between correlation matrices, even when the true differences tend to be relatively small. View Full-Text
Keywords: k-means; fMRI data analysis; MM algorithm k-means; fMRI data analysis; MM algorithm
►▼ Show Figures 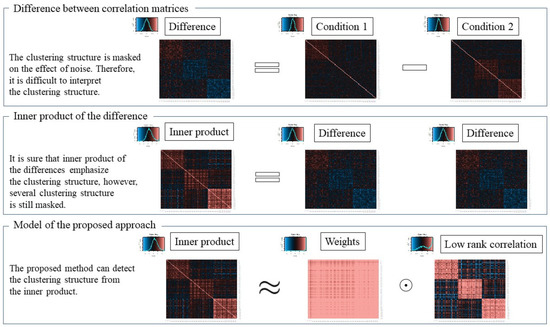