Barriers of Consumer Behavior for the Development of the Circular Economy: Empirical Evidence from Russia
Next Article in Special Issue

Alien Wood Species as a Resource for Wood-Plastic Composites

A repeated measures design was used to investigate the effects of IRR vs. traditional resistance training on muscle strength, RFD and muscle architecture in a group of male physical education students (Figure 1). Sixteen participants were assigned according to their initial 1 repetition maximum (1-RM) strength in leg press, so that the two groups have similar initial strength, into either an inter-repetition rest group (IRRG) or a traditional group (TG) and followed 7 weeks of resistance training using a 45° incline leg press. Before the training intervention period, participants visited the laboratory on three different occasions separated by 48 h. During the first visit, measurement of leg-press 1 repetition maximum (1-RM) strength was performed as well as familiarization with the RFD measurement. Isometric leg press RFD and isometric peak force (PF) were evaluated in the second visit and vastus lateralis (VL) muscle architecture, vastus intermidius (VI) muscle thickness, and quadriceps cross sectional area (CSA) via ultrasonography on the third visit. Measurements were performed in the same order after the training intervention.

Twenty male physical education students were initially recruited and informed about the purpose of the study and the experimental procedures. They signed an institutionally approved informed consent before entering in the research procedure. Four participants withdraw during the initial familiarization sessions, for purposes unrelated to the study. Thus, 16 participants were assigned into two groups, the inter-repetition rest group (IRRG: N = 8, age: 23.6 ± 6.8 years, body mass: 75.7 ± 8.4 kg, body height: 1.80 ± 0.07 m) and the traditional group (TG: N = 8, age: 21.7 ± 2.7 years, body mass: 79.5 ± 12.8 kg, body height: 1.79 ± 0.08 m), Participants were allocated into the two training groups, according to their initial leg press 1-RM strength. More specific, following the initial 1-RM leg press strength measurement (for details see below) participants were assigned into the (IRRG: 237.5 ± 30.5 kg or TG: 261.3 ± 26.6 kg. A T-Test statistical analysis revealed no significant difference between groups (IRRG: 237.5 ± 30.5 kg vs. TG: 261.3 ± 26.6 kg, p = 0.120). Participants fulfilled the following criteria: (a) absence of any orthopedic/neuromuscular maladies, (b) absence of drug abuse or nutritional supplements, and (c) absence of systematic resistance exercise training at least during the previous 6 months. All participants followed the same courses during the study semester, including studying the tactics of team sports, approximately 3 h per week, according to their academic program of the University. None of them followed systematic sport activity outside of the University program. All procedures were in accordance with the 1975 Declaration of Helsinki as revised in 2000 and were approved by the Institutional Ethics Committee (project number 1024/8/11/2017).

Training was performed for 7 weeks, 2 times per week with at least 72 h rest between training sessions. The TG performed 4 sets of 6 repetitions with 85% of 1-RM, with a 3-min rest interval between sets. When a TG participant performed more than 6 repetitions in a set the load was increased in the following set to meet the 6-RM. The new (increased) load was also used for the initial set of the following training session. Participants of the IRRG also performed 4 sets of 6 repetitions with 85% of 1-RM with 3 min rest between sets. However, the IRRG training included 20 s rest between single repetitions [9,32]. Single repetitions were selected because of the previously reported positive effect on muscle strength [4]. During the 20-s rest between repetitions, the load was locked in the rack of the leg press machine and the participant remained seated with feet placed on the floor (not on the leg press platform). Five seconds before the end of the 20-s rest period, participants placed their feet on the leg press platform and performed the next repetition in response to the researcher instruction (precisely at 20 s). At all training sessions and repetitions two researchers assisted the participants in order to take off the load from the rack. This was performed because the load was locked in a lower position where the knees were bended approximately at 75–85°. Thus, in order to avoid any unnecessary fatigue and injuries starting from this position all participants received assistance to unlock the loads. Given the advantage of inter-repetition rest training on achieving a high movement velocity in each repetition, participants were not specifically instructed to perform the training with maximum intended movement velocity. The total training session duration for the IRRG was 39.3 ± 1.4 min and for TG was 36.9 ± 0.9 min (p = 0.001, η2 = 0.176).
Thirty minutes after the end of every training session, participants provided their rating of perceived exertion 1–10 scale score (RPE) [33], for the evaluation of the training intensity. An RPE score lower or equal to 7 (very hard range), signified a 2.5% load increase for the next training session for the IRRG [34,35]. By the end of the current training intervention program, no significant difference was observed in mean session RPE (IRRG: 7.8 ± 0.3 vs. TG: 8.1 ± 0.3, p = 0.419, η2 = 0.047, Figure 2) and in mean total training volume (IRRG: 5090.1 ± 566.2 kg vs. TG: 5532.5 ± 451.4 kg, p = 0.106, η2 = 0.176, Figure 3), between IRRG and TG.

Maximum leg press strength was performed in a 45° incline leg press machine. After a 10-min warm-up on a stationary bicycle and static and dynamic stretching exercises for the major muscle groups, participants performed 2 sets of 10 repetitions with 80 kg in order to warm up. Then, 3 sets of 8, 6 and 4 repetitions with approximately 50–60%, 70–75%, and 80–85%, respectively, of the predicted 1-RM were allowed. Then, 3–5 sets of 1 repetition were performed in order to determine the maximum strength. Three minutes of rest was allowed between sets while two of the researchers were present for monitoring the execution technique of the exercise and encouraging participants to perform their maximum strength. The intra-class correlation coefficient (ICC) for 1-RM leg press strength measurement was 0.98 (95% confidence intervals (CI) with lower and upper bounds: 0.940–0.990, coefficient of variation (CV%) was 8.1%).

All data are presented as mean ± SD. A 2-way repeated measures analysis of variance (2 × 2 group × time), with Bonferroni post hoc correction, were used to evaluate differences for each variable between groups. Calculation of effect sizes (η2) was also performed. Repeated measures analysis of covariance (ANCOVA) was used for RFD performance test because significant differences were found between IRRG and TG groups at pre-test measurements. Independent sample T-Test was used to detect changes in session RPE and training volume, between IRRG and TG, as well as to examine percentage differences in response to training between the IRRG and TG. Reliability for all measurements was performed using a two way random effect intra class correlation coefficient (ICC) with 95% confident intervals (CI), as well as by calculating the coefficient of variation (CV%). All data were analyzed using SPSS 21, whilst, p ≤ 0.05 was used as a 2-tailed level of significance.

Authors express their gratitude to the participants of the study. Authors also thank Anastasia Georgaki and Michalis Vogiatzoglou for their assistance during the training period. No funding was received for the study and there was no conflict of interest from the results of this study. 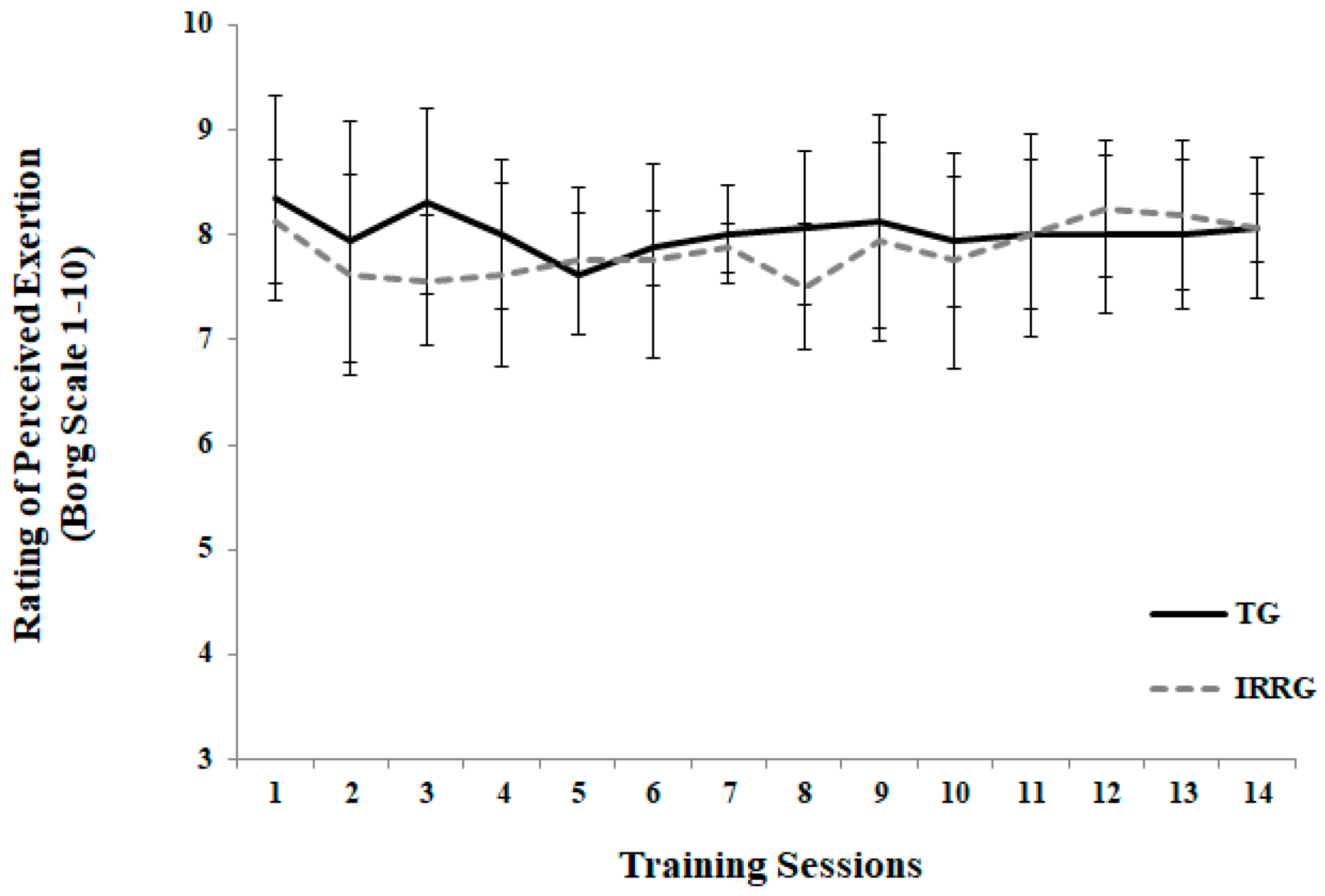