Today, most of the mid to high tall buildings are built with tube structural systems. This type of system is known for its circumferential frame structure composed of closely placed columns and high beams, forming a tubelike box cross section, whose main purpose is to resist horizontal loads such as winds and earthquakes. On the inside of the building, additional columns may be found for bearing only vertical loads. Additionally, a combination of a tube structure with a central core is quite often, thus further enhancing the stiffness of the structure. The greatest advantages of the tube structural system are the ability to build very tall buildings, the enhanced stiffness of the building, the possibility of construction in various materials such as reinforced concrete and steel, possibility to use prefabricated elements for the purpose of repeating the floor dimensions and plans, and finally, a much-desired openness for the interior design of the building. Aside from very small openings that are a direct result of the column spacing on the exterior of the building, the most significant shortcoming of the tube system is the shear lag effect [1]. This effect is also very common in other structural systems of tall buildings [2,3,4] which will be discussed in detail in chapter 2 of this paper.

3. Overview of the Existing Tall Buildings with Tube Structural System

To set the boundaries of parameters for the computer-based model, an overview of the most significant buildings with the tube structural system is given. The parameters that were included are: material used, storey height, building height, layout dimensions, column spacing and column dimensions (Table 1). According to most used parameter values range, a computer-based template model is developed.

4. Computer-Based Model of the Tube Structure

A parametric analysis was conducted in SOFiSTiK 2020 software. Based on the preliminary analysis provided in the previous chapter, dimensions of the building and construction elements are chosen for the purposes of forming a computer-based model (Figure 4):

The columns and beams are modelled with one dimensional finite elements (6 degrees of freedom), and assigned a corresponding cross section properties (moment of inertia for both axis, sectional area, shear deformation area, torsional moment of inertia, warping modulus and concrete material linear properties) according to column or beam member dimensions. They are connected with a fixed connection at the intersection of their axes, allowing the transfer of moment, shear force and axial force. Floor slabs are modeled as rigid diaphragms (Figure 5), by coupling of the nodes in the same storey to joint in-plane movements and rotations (flexible slab—rigid disk behavior), as allowed and recommended by Eurocode design code A linear statical analysis is performed.
The building is loaded with the dead load (no additional vertical loads were considered besides the dead load) of all structural elements and wind load uniformly distributed along the height. The value of the uniformly distributed load is determined as the maximum expected value based on EN 1991-4 [26] while considering the top of the structure as a reference height. In addition, an actual wind profile will be used in the parametric analysis that is also calculated by EN 1991-1-4 [26]. The horizontal loads are concentrated at each intersection of beams and columns (Figure 6).
The shear lag effect is observed throughout the building’s height. In Figure 7 the shear lag effect is shown in seven characteristic storeys ranging from the 2nd to the 36th storey. On the horizontal axis from left to right eleven columns are placed and on the vertical axis the coefficient α is given. This coefficient shows the ratio of the compressive force in a given column to the compressive force in the middle column. Conclusively, the value α = 1 applies to the column in the very middle, that is to column number 6 (Figure 7). By the values shown in Figure 7 it is clear that in the lower storeys (2nd and 6th) the positive shear lag is prominent and by moving towards the building’s top its impact diminishes with the negative shear lag rapidly increasing. At the 12th storey it is noticeable that the shear lag effect is practically non-existent so at this position it is considered that the positive shear lag morphs into the negative shear lag.

The parametric analysis will be conducted with four main parameters (Figure 4):

5.1. The Impact of Column Spacing on the Shear Lag Effect

In this chapter, the impact of exterior column spacing in a tube structure on the shear lag effect will be analyzed. As already stated, the column dimension perpendicular to the horizontal load direction will stay the same throughout the analysis (c = 0.5 m). The column spacing will be varied five times with values of s = 2.0 m, s = 2.18 m, s = 2.4 m, s = 2.67 m and s = 3.0 m while the layout dimensions stay constant A/B = 24 m/24 m (number of columns is varied). The entire building height and the storey height are constant. The same seven storeys as in chapter 4 will be analyzed. It is very important to note that as the column spacing is changed, the referent node area for point load changes. That means that for different column spacing the horizontal force in the nodes where beams and columns meet is different. The results of the analysis are shown in Figure 9.
According to the results (Figure 9) the following can be concluded:

5.2. The Impact of Beam Height on the Shear Lag Effect

It can be deduced that the decrease in beam height results in the increase of positive and negative shear lag effect in tall tube buildings.

5.3. The Impact of Layout Dimensions on the Shear Lag Effect

In this chapter, the impact of building layout dimensions on the shear lag effect will be analyzed. The parameters that are going to stay constant include the beams cross section dimensions b/h = 0.5 m/1.0 m, column cross section dimension c = 0.5 m, column spacing s = 2.4 m, storey height H1 = 3.5 m and the entire buildings height H = 126 m. The layout ratio of the building will be changed from a rectangular shape to a square shape starting from A/B = 24/43.2 = 0.56 and ending with the final ratio of A/B = 24/24 = 1.0. The value of A is the side of the building parallel to the horizontal load direction (web panel) and the value of B is the side of the building perpendicular to the horizontal load direction (flange panel). The results of the analysis are shown in Figure 11.
According to the results the following can be concluded:

It can be deduced that the positive and negative shear lag effect are increased with the increase of the building side on which the horizontal loads acts.

5.4. The Impact of Wind Load Type on the Shear Lag Effect

In this chapter, the impact of the type of the horizontal load profile on the shear lag effect will be analyzed. The constant parameters include the beams cross section dimensions b/h = 0.5 m/1.0 m, column cross section dimensions c = 0.5 m, column spacing s = 2.4 m, the entire buildings height H = 126 m, storey height H1 = 3.5 m and building layout dimensions A/B = 24 m/43.2 m. The building layout dimensions were chosen differently from the previous analyses, so that the difference in effect of different horizontal load profiles is most apparent. Two horizontal load profiles shall be considered: the continuous wind load with a constant value throughout the building’s height and the actual wind load profile calculated using EN 1991-1-4 [26]. The constant load profile includes the use of the maximum wind load force that is calculated for the top of the building after which that load is used throughout the building height (Figure 12b). The actual wind load profile (Figure 12a) is calculated using EN 1991-1-4 [26]. As it was the case in prior analysis, the same seven storeys will be considered. The results of the analysis are shown in Figure 13.
According to the results the following can be concluded:

It can be deduced that the positive and negative shear lag effect are more significant for the continuous wind load with a constant value in most storeys of the structure.

The prototype structure of a 126 m high (36 storeys) tube structural system tall building was analyzed, comprising of a reinforced concrete column and beam panel members. For a varying set of parameters defining layout dimensions from 24 to 43 m, column spacing from 2 to 3 m, beam height from 0.8 to 1.2 m, and two different horizontal load profiles, following conclusions can be made regarding changes in the shear lag effect: 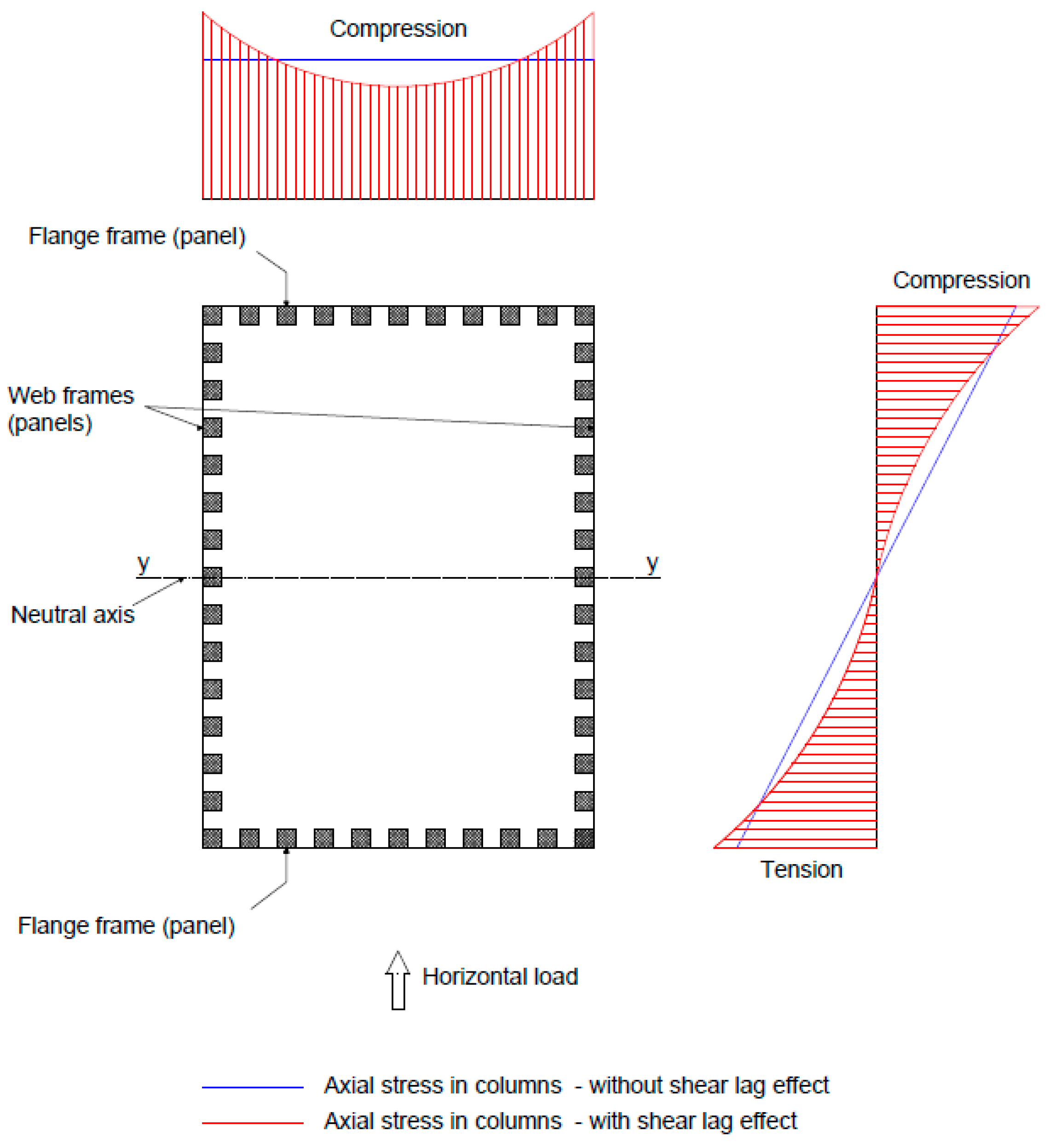 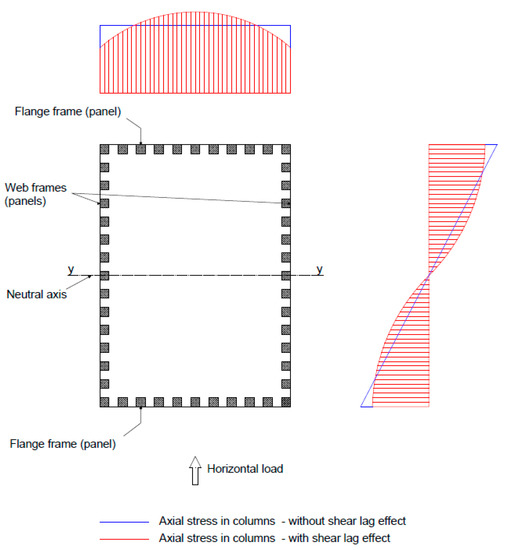 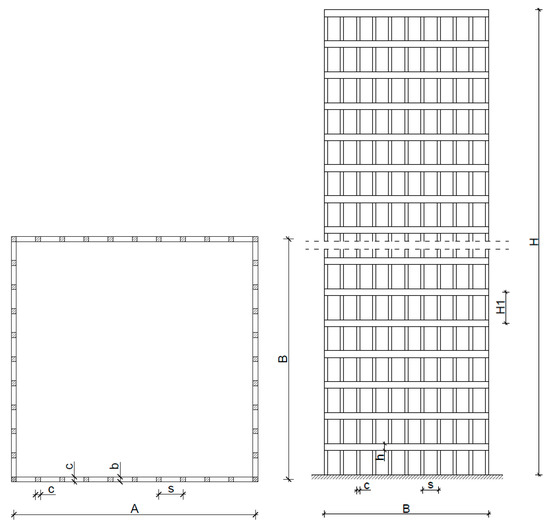 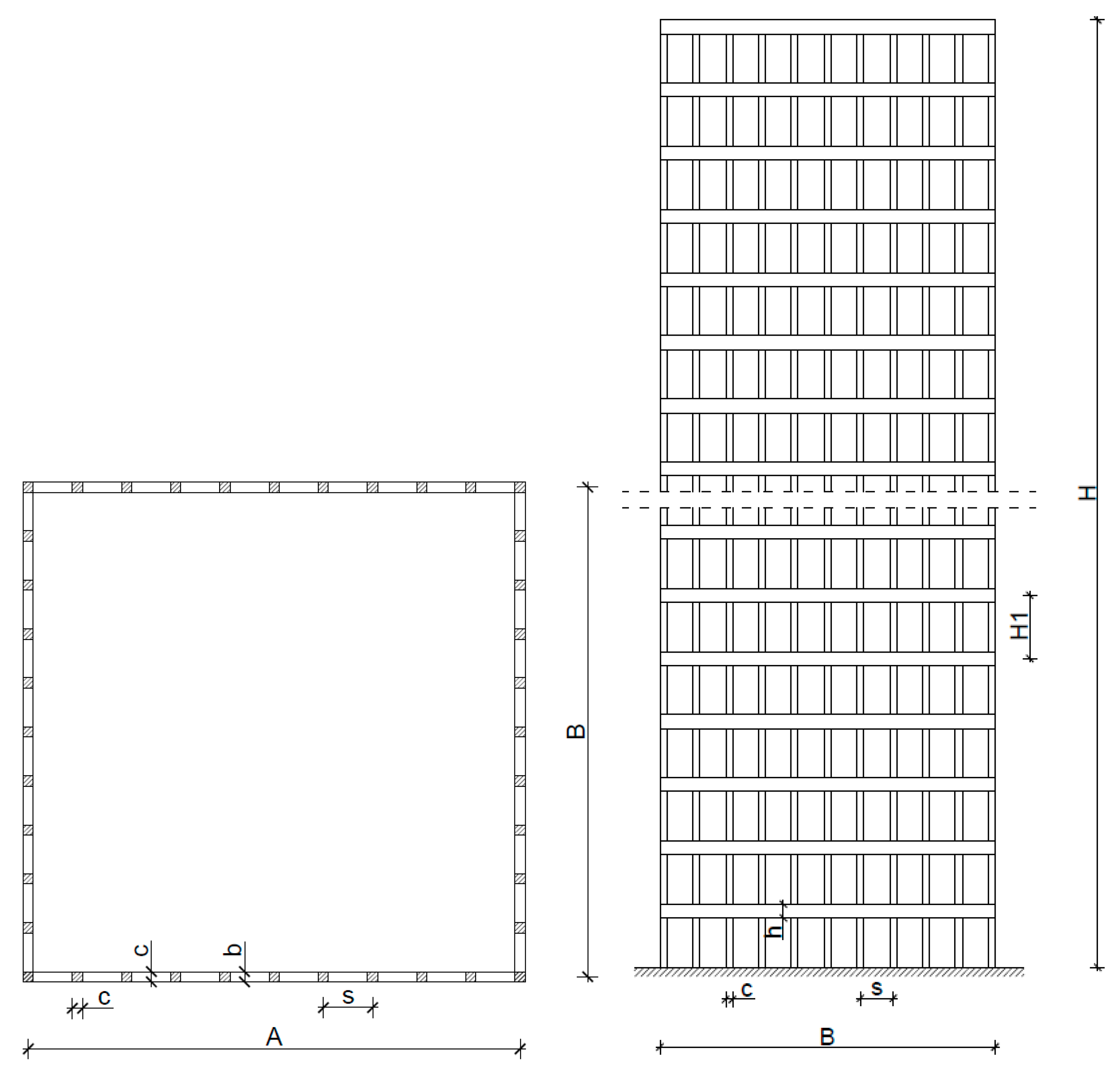 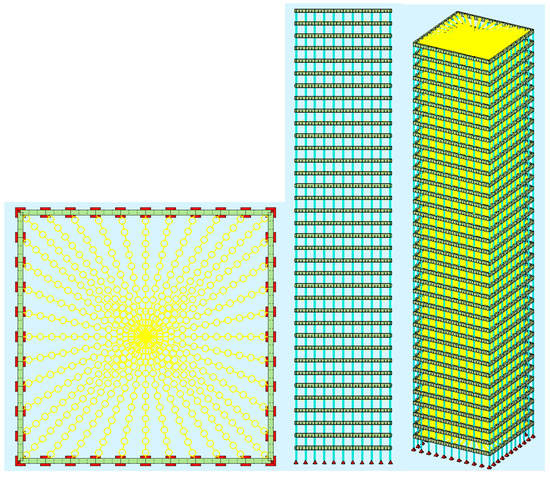 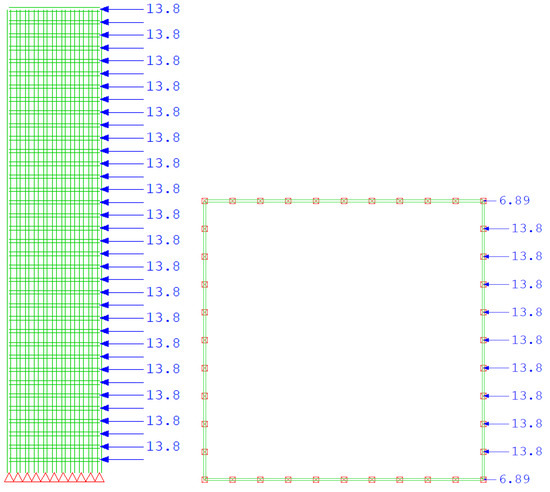 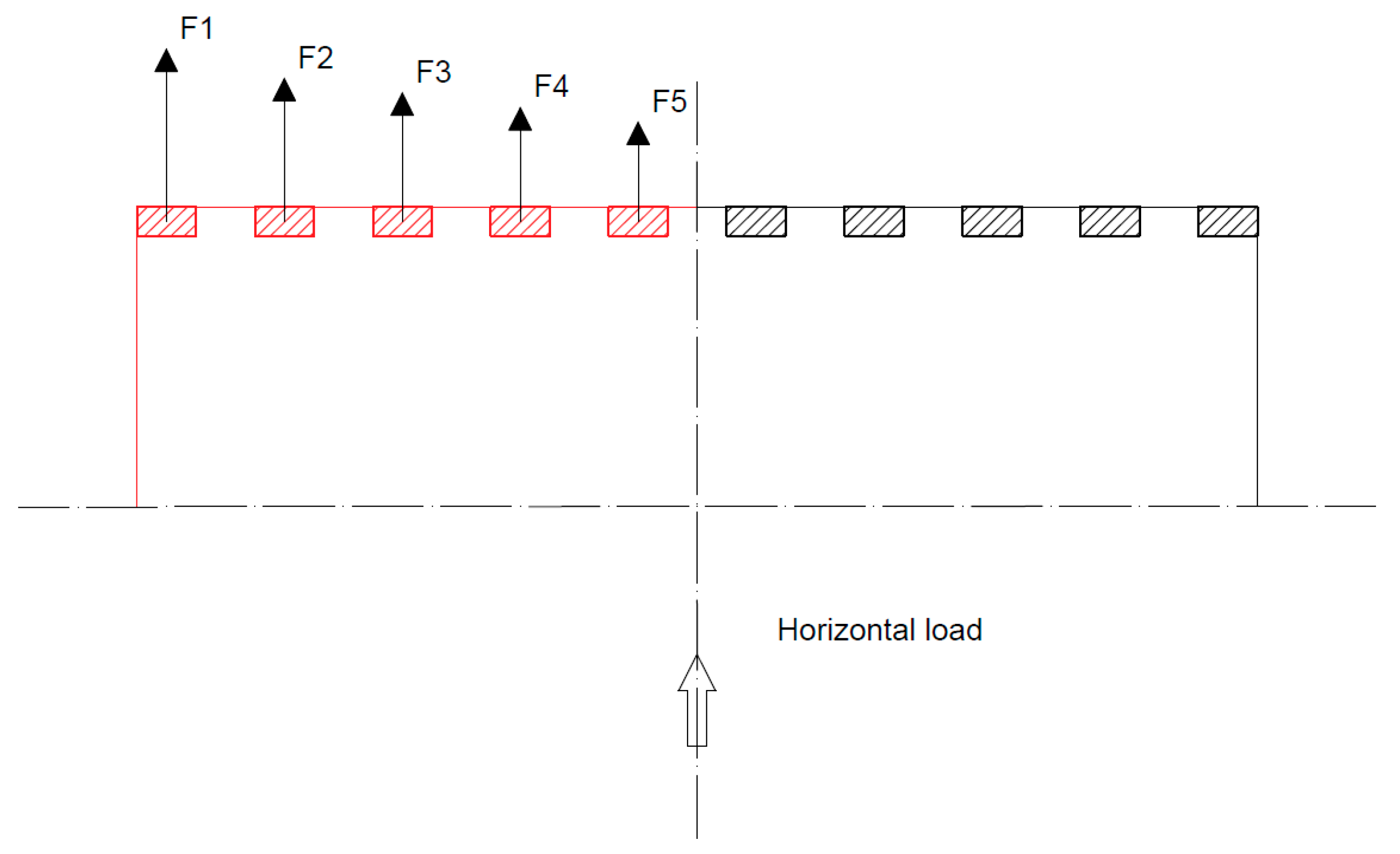 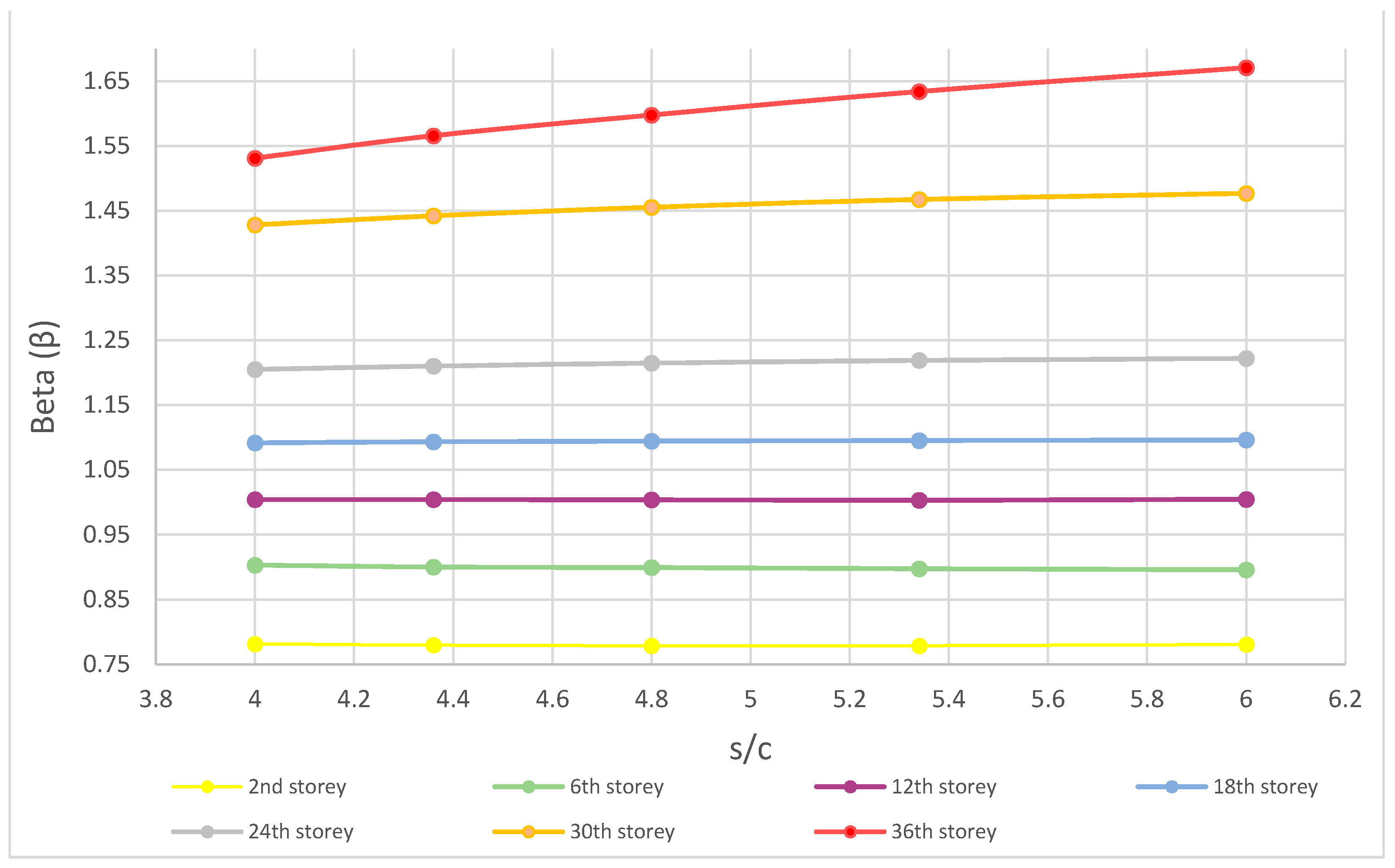 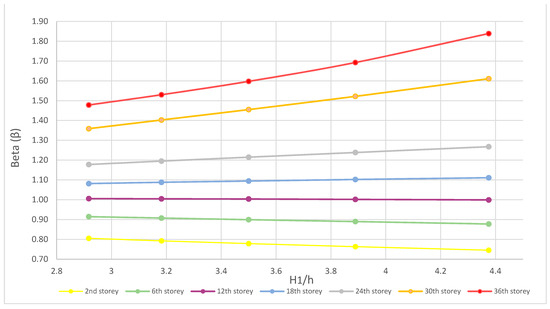 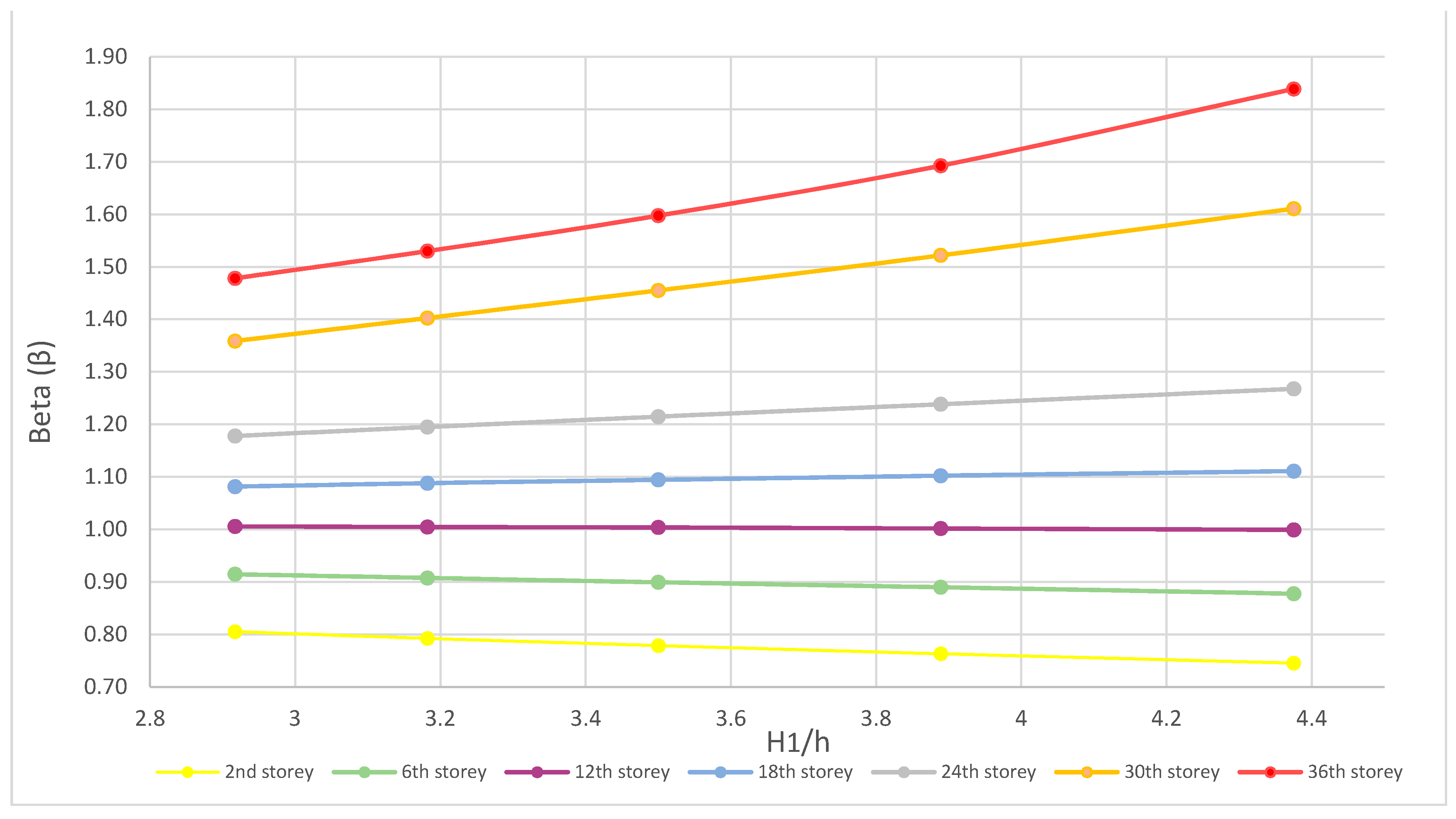 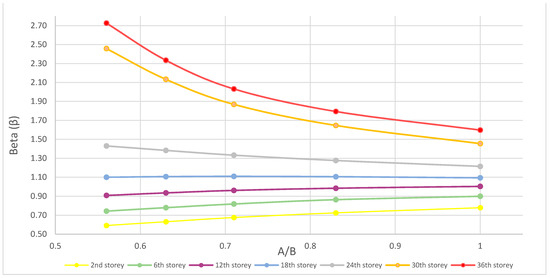 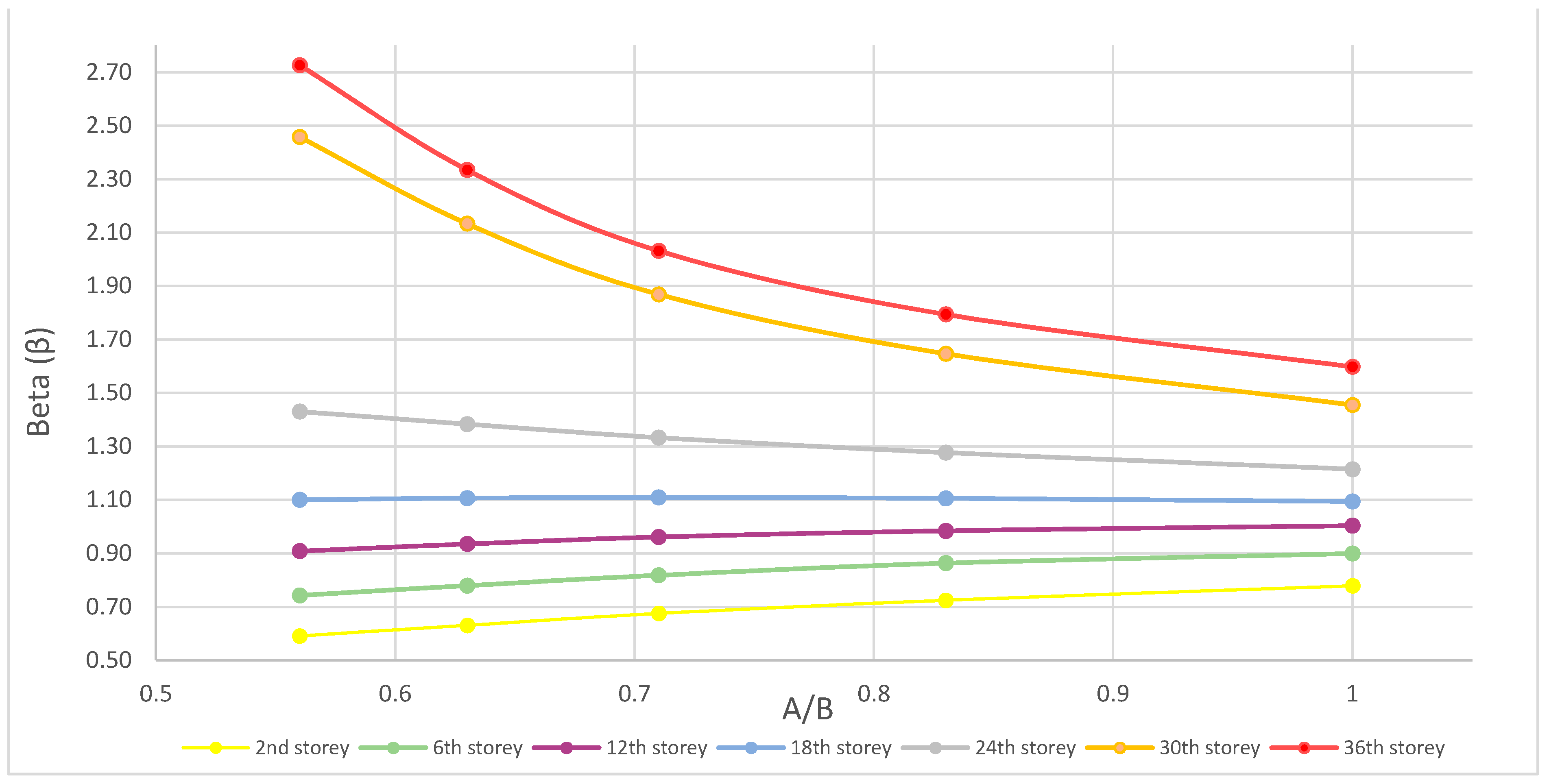 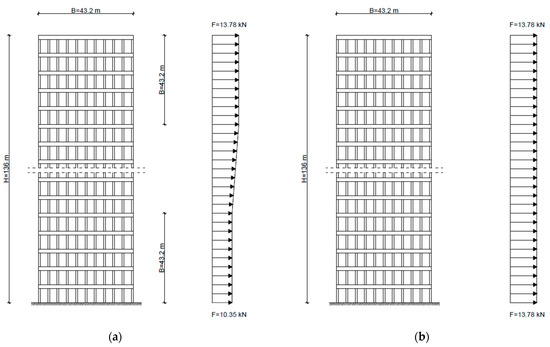 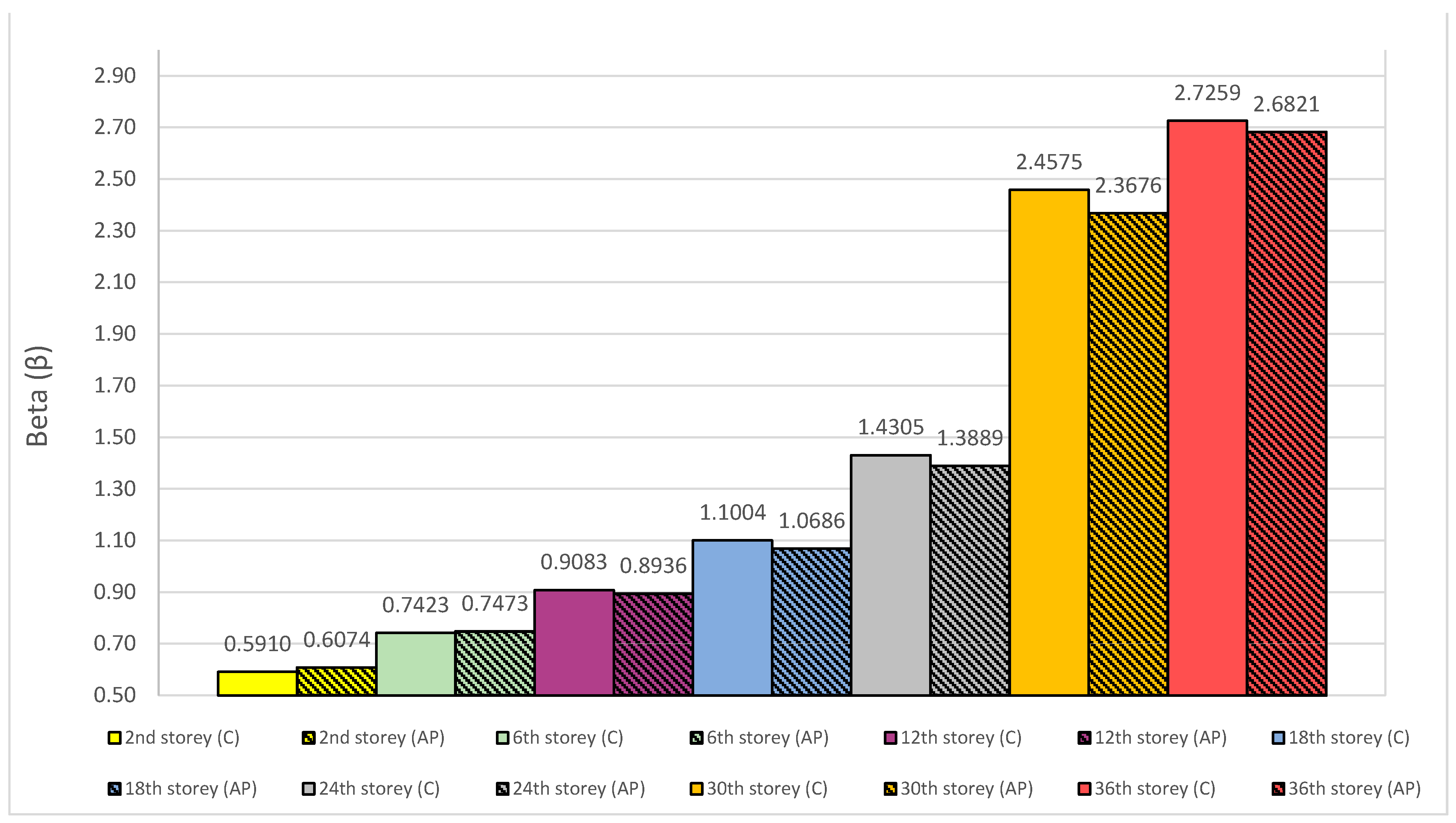