:
Oxygen carrier aided combustion (OCAC) is utilized to promote the combustion of relatively stable fuels already in the dense bed of bubbling fluidized beds by adding a new mechanism of fuel conversion, i.e., direct gas–solid reaction between the metal oxide and the fuel. Methane and a fuel gas mixture (PSA off-gas) consisting of H2, CH4 and CO were used as fuel. Two oxygen carrier bed materials—ilmenite and synthetic particles of calcium manganate—were investigated and compared to silica sand, an in this context inert bed material. The results with methane show that the fuel conversion is significantly higher inside the bed when using oxygen carrier particles, where the calcium manganate material displayed the highest conversion. In total, 99.3–99.7% of the methane was converted at 900 °C with ilmenite and calcium manganate as a bed material at the measurement point 9 cm above the distribution plate, whereas the bed with sand resulted in a gas conversion of 86.7%. Operation with PSA off-gas as fuel showed an overall high gas conversion at moderate temperatures (600–750 °C) and only minor differences were observed for the different bed materials. NO emissions were generally low, apart from the cases where a significant part of the fuel conversion took place above the bed, essentially causing flame combustion. The NO concentration was low in the bed with both fuels and especially low with PSA off-gas as fuel. No more than 11 ppm was detected at any height in the reactor, with any of the bed materials, in the bed temperature range of 700–750 °C.
Keywords:
methane; bubbling fluidized bed combustion; oxygen carrier aided combustion; PSA off-gas; oxygen carrier; ilmenite

The most commonly used bed material in biomass fluidized bed boilers is silica sand, which is inert towards fuel and air but acts as an ash absorbent and thermal flywheel. In these experiments, silica sand from Baskarp, Sweden, was used. The second material used was Norwegian rock ilmenite concentrate, supplied by Titania A/S. Ilmenite is a mineral ore rich in iron and titanium oxides. The third material evaluated in this work is a synthetic oxygen carrier referred to as C28 (CaMn0.775Mg0.1Ti0.125O3-δ) which was manufactured by VITO in Belgium by spray drying [18]. The C28 material used in these experiments was recovered from the fuel reactor after experiments in a 10 kWth CLC reactor used for gaseous fuels [15]. The elemental composition for sand and ilmenite is reported in Table 2.
Sand could be assumed to be an inert bed material, but to make sure that this is the case, the reactivity of sand was tested in a separate experiment at high temperature where syngas was mixed with nitrogen [29]. This experiment showed that the sand was inert and did not show any tendencies of gas–solid reactions with the CO or H2. Ilmenite and C28 are, however, oxygen carriers and these are oxidized/reduced when reacting with the oxygen/fuel which has already been shown in numerous CLC experiments. The general reaction between an oxygen carrier () and a hydrocarbon fuel () is shown in Equation (3).
The reaction between methane and the most oxidized state of ilmenite, which is pseudobrookite () and rutile () can, for example, be described according to Equation (4).
The reoxidation of ilmenite can be described by Equation (5). It should be noted that other reactions can occur with ilmenite as well, such as redox reactions with magnetite (Fe3O4) and hematite (Fe2O3).
The reduction of C28 with methane can be defined according to Equation (6).
Equation (7) describes the reoxidation of C28.
All three bed materials were sieved to the size interval 90–212 μm and from that sample the particle size distribution was estimated (see Figure 3). Some differences can be observed between the different bed materials where sand has predominantly particles with a size in the lower range of the chosen sieving size interval.
The main data of the particles employed are presented in Table 3. The bulk density was estimated according to the ISO standard 3923-1:2008 where the mass poured into a known volume was measured. Based on the particle size distribution the weighted mean particle diameter was estimated. The minimum fluidization velocity was estimated based on the expression of Wen and Yu [30] and the terminal velocity was determined based on the expressions presented by Kunii and Levenspiel [31]. The values presented in Table 3 are based on operation at 750 °C using air as a fluidization gas. The thermal input indicated in the same table is estimated for the case with a superficial gas velocity of 0.2 m/s, an air-to-fuel-ratio of 1.05 and a temperature of 750 °C.

The reactor setup enables continuous measurements of pressure and temperature for all measurement positions. The gas composition can be measured continuously for one vertical position at a time. An air flow is constantly fed to the reactor to prevent bed material from falling through the distribution plate and to avoid local hotspots in the bed. Fuel was added to the system once the bed temperature had reached its setpoint value and measurement data were then extracted for 1 min once steady state operation was observed with respect to measured pressure, temperature and gas concentrations. The chosen temperature intervals were chosen to cover a range from a low temperature (600 °C) at which little or no fuel conversion could be expected to take place, to a high temperature where complete if not close to complete fuel conversion occurs. This should enable a good comparison between the different bed materials as well as providing insights about the temperature dependence. The target was to maintain a wind box temperature not exceeding 500 °C to avoid fuel ignition before the gas reaches the bed. When operating at a bed temperature of at least 750 °C fuel ignition took place above the bed with all three bed materials.
Each bed material was pre-heated in the reactor system at 900 °C in the presence of air for at least one hour before the start of the experiments. This was mainly done to ensure that there was no net absorption of oxygen in the system with ilmenite, which otherwise could occur when using fresh ilmenite particles at low temperatures. When the gas sampling probe was placed at a certain height, the gas concentration at that point is estimated, as well as the average temperature and pressure at all measurement points. As a result, several average temperatures and pressures are recorded and the one presented in this article for a certain position is the average of those values. The targeted superficial gas velocity is estimated based on the targeted bed temperature.
The air-to-fuel ratio (AFR) is defined as the ratio of the volumetric flow rate of air fed to the fluidized bed to the volumetric flowrate, corresponding to the stoichiometric combustion of methane. The stoichiometric amount of air is based on the amount of oxygen needed to convert the methane fed to the reactor, according to Equation (8):
If CO rather than CO2 is detected, it indicates that the combustion is incomplete.
When PSA off-gas is used, the amount of air is, in addition to the required oxygen to convert the methane, estimated based on the oxygen needed to burn H2 and CO, according to Equations (9) and (10).
The gas composition of the simulated PSA off-gas is presented in Table 4.
The measurements with both methane and PSA off-gas were made with an air-to-fuel ratio of 1.05 and a superficial gas velocity of approximately 0.2 m/s. In the experiments with methane as fuel, the air-to-fuel ratio was also varied from 1 to 1.2 at 750 °C for all three bed materials. A temperature of 750 °C was chosen as a suitable temperature because it was easier to distinguish differences in fuel conversion at this temperature rather than at high bed temperatures, such as 900 °C. After operation, the system was cooled down and the remaining solids inventory in the reactor was weighed. The results from this weighing showed that approximately 10 g or less was lost.

A laboratory-scale bubbling fluidized bed with an approximate bed height of 15 cm was used for oxygen carrier aided combustion of methane and PSA off-gas. Three bed materials were compared—sand, rock ilmenite and a manufactured manganese-based perovskite material (C28)—at bed temperatures ranging from 600 °C to 900 °C. The gas conversion was monitored by using measurements of temperatures and gas composition over the length of the reactor. The results with methane showed that an improved in-bed fuel conversion could be achieved using oxygen carriers as bed materials instead of sand, where C28 showed the best results. This can be traced to the fact that the oxygen carriers enable improved contact between fuel and oxygen, due to the addition of an additional fuel conversion mechanism in the form of the gas–solid reaction between fuel and metal oxide. At a bed temperature of 900 °C, close to complete methane conversion was observed, 99.3–99.7%, with ilmenite and C28 as bed materials 9 cm from the distribution plate, whereas the result for sand was 86.7%. The oxygen carriers also showed significantly higher methane conversion at lower temperatures. A test where the air-to-fuel ratio was varied from 1 to 1.2 showed only a small improvement in methane conversion.
The experiments with PSA off-gas as fuel showed overall high gas conversion for all bed materials at moderate temperatures (600–750 °C), where only minor differences were observed between the bed materials. The suggestion to integrate OCAC with SMR plant is supported by the experimental results in this work, since:

Rustan Hvitt and Johannes Öhlin should be acknowledged for their support in the preparations and execution of the experiments. 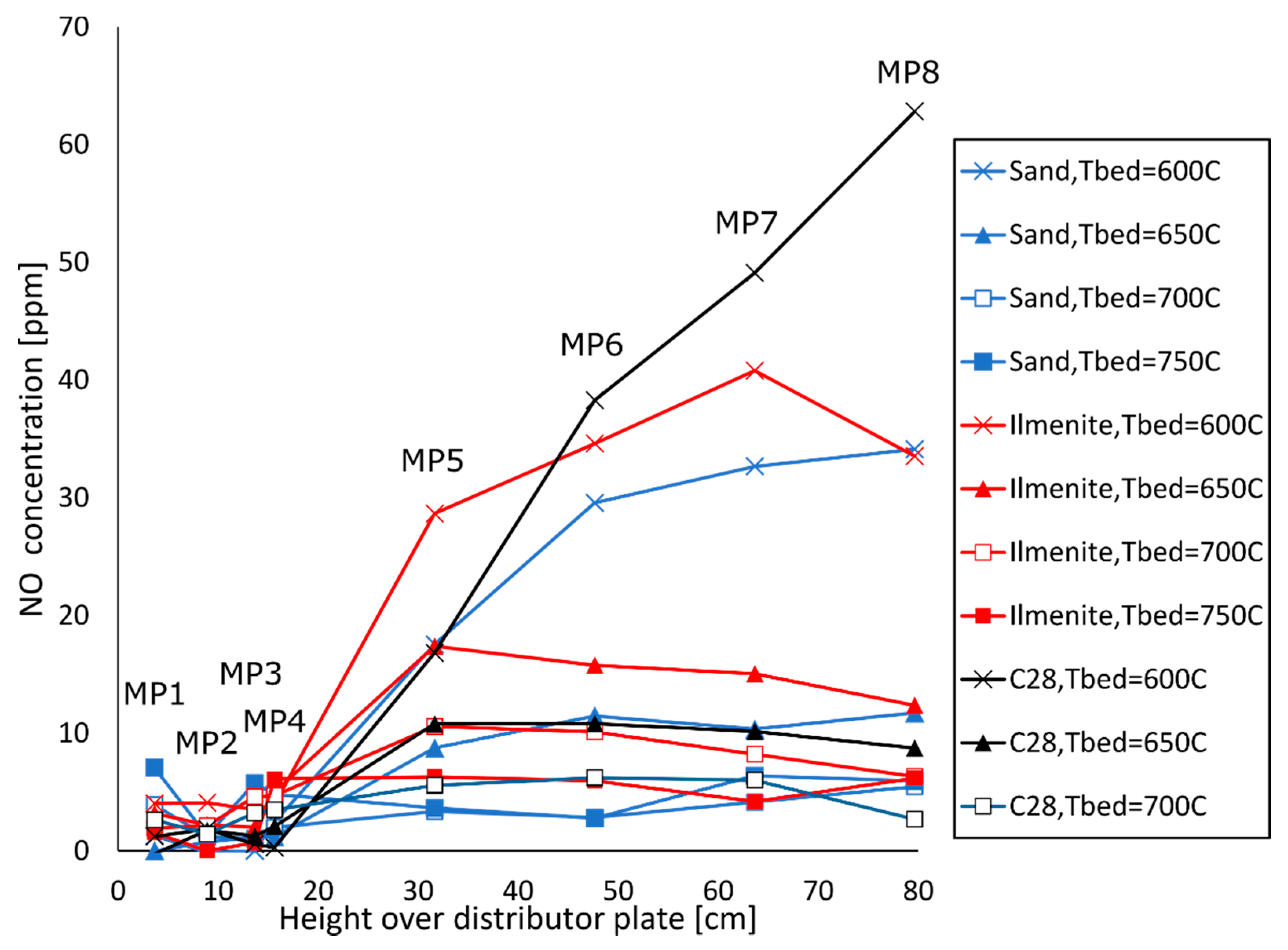