Concentration in Saliva and Antibacterial Effect of Xylitol Chewing Gum: In Vivo and In Vitro Study
Next Article in Special Issue

This article reports on the investigation of the effects of process parameters and their interactions on as-built part quality and resource-efficiency of the fused filament fabrication 3D printing process. In particular, the influence of five process parameters: infill percentage, layer thickness, printing speed, printing temperature, and surface inclination angle on dimensional accuracy, surface roughness of the built part, energy consumption, and productivity of the process was examined using Taguchi orthogonal array (L50) design of experiment. The experimental results were analyzed using ANOVA and statistical analysis, and the parameters for optimal responses were identified. Regression models were developed to predict different process responses in terms of the five process parameters experimentally examined in this study. It was found that dimensional accuracy is negatively influenced by high values of layer thickness and printing speed, since thick layers of printed material tend to spread out and high printing speeds hinder accurate deposition of the printed material. In addition, the printing temperature, which regulates the viscosity of the used material, plays a significant role and helps to minimize the dimensional error caused by thick layers and high printing speeds, whereas the surface roughness depends very much on surface inclination angle and layer thickness, which together determine the influence of the staircase effect. Energy consumption and productivity are primarily affected by printing speed and layer thickness, due to their high correlation with build time. View Full-Text
Keywords: FFF printing; process optimization; dimensional accuracy; surface roughness; energy consumption; productivity FFF printing; process optimization; dimensional accuracy; surface roughness; energy consumption; productivity
►▼ Show Figures 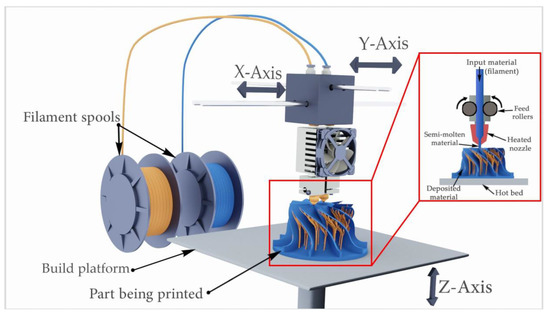