Based on recently published research on leaching control mechanisms in electric arc furnace (EAF) slags, it is assumed that a FeO/SiO2 ratio of around one leads to low leached V and Cr concentrations. This ratio influences the mineral phase composition of the slag toward higher amounts of spinel and a lower solubility of calcium silicate phases by suppressing the formation of magnesiowuestite and highly soluble calcium silicate phases. To evaluate this hypothesis, laboratory and scaled up tests in an EAF pilot plant were performed on slag samples characterized by elevated V and Cr leaching and a high FeO/SiO2 ratio. Prior to the melting experiments, the optimum FeO/SiO2 ratio was calculated via FactSageTM. In the melting experiments, the ratio was adjusted by adding quartz sand, which also decreased the basicity (CaO/SiO2) of the slag. As a reference, remelting experiments without quartz sand addition were conducted and additionally, the influence of the cooling rate of the slag was examined. The remelted (without quartz sand) and the remelted modified slags (with quartz sand) were analyzed chemically and mineralogically and the leaching behavior was investigated. The modification of the slags yielded a minimized release of V and Cr, supporting the hypothesis that the FeO/SiO2 ratio influences the mineralogy and the leaching behavior. View Full-Text
Keywords: electric arc furnace (EAF) slags; FactSageTM calculations; leaching control mechanisms; melting experiments; quartz sand electric arc furnace (EAF) slags; FactSageTM calculations; leaching control mechanisms; melting experiments; quartz sand
►▼ Show Figures 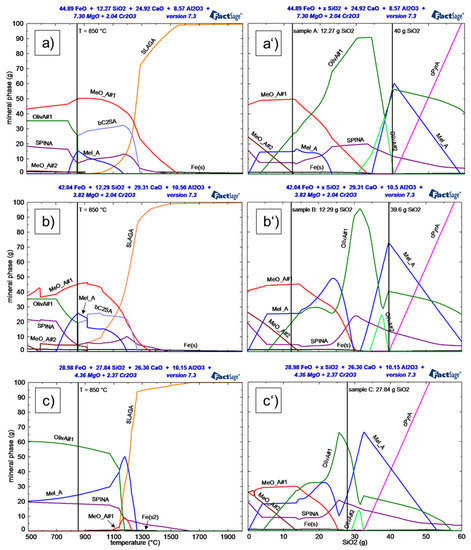