Track settlement is a common problem observed in ballasted railway tracks. The ballast bed and the material layers underneath it, deform under repeated trainloads and create uneven support conditions along the track. In some cases, the ballast settlement could be detrimental and the sleepers lose contact with the ballast bed partially or completely, resulting in higher contact forces and load distributions over the supported sleepers. Numerous studies have been conducted to investigate the phenomenon for normal tracks. Nevertheless, railway turnouts are somehow neglected. As a consequence, this study focuses on the relation between unsupported sleepers/bearers (particular name for turnouts) and a railway turnout system to develop the understanding of the response of turnout system under dynamic loadings. A 3D Finite Element Method (FEM) model is inherited from previous study and adopted to reflect the cases with unsupported bearer configurations. It is noteworthy that inherited model is capable of reflecting the impact forces, which is an inherent and fundamental characteristic of a railway turnout. Model verification is done with the parent model that was verified by field measurements. Three different support conditions (i.e., one, two, three unsupported bearers), five different velocities and six different positions of unsupported bearers are simulated. The results show that the performance of ‘fibre-reinforced foamed urethane’ (FFU) bearers are promising and more, unsupported bearers carry significant loads at particular locations, which is contrary to the sleepers on normal track that are subjected to insignificant loads. View Full-Text
Keywords: railway; turnout; switches and crossings; impact forces; unsupported sleepers; unsupported bearers railway; turnout; switches and crossings; impact forces; unsupported sleepers; unsupported bearers
►▼ Show Figures 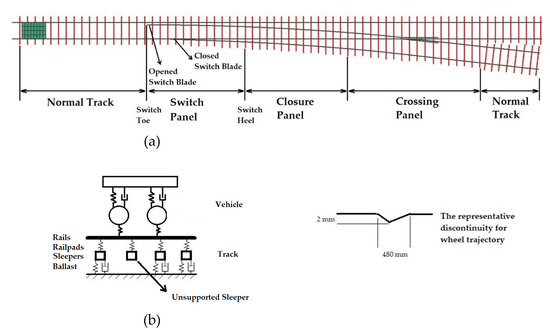