ANSYS Ver 17.2 (ANSYS, Inc., Cannonsberg, PA, USA) [18] was used as the finite element analysis program, and solid elements were used for 3D modeling. The mesh of the track model contained 20,736 nodes and 80,000 elements. The element size of the sleeper-and-rail joint was assumed to be 15 mm. The ballasted track model for the numerical simulation was configured as shown in Figure 5a. The rails, rail pad, and sleepers are composed of solid elements, and the ballast is composed of spring-damper elements. The sleeper sizes were 2500 mm in length, 150 mm in depth, and 300 mm in width. There is a clearance of 20 mm between the rails at the actual point. The ballast conditions are imposed under the sleeper base using a spring-damper element having the typical ballast properties. The spring stiffness and damping coefficient of the rail pad are 400 kN/mm and 15.683 kNs/m, respectively, and the values for the ballast are 200 kN/mm and 77.877 kNs/m, respectively [2,19,20]. A vertical wheel load of 55 kN was applied using the measured dynamic wheel load illustrated in Figure 4a. For numerical analysis, the rail joint was modeled as shown in Figure 5 by applying section A of the field measurement (Figure 3a). The mechanical properties of light-rail systems are given in Table 2.

4.2. Track Impact Factor Based on the Measured Vertical Rail Displacement

The displacement occurring at the CWR and rail joint was confirmed by FEA. Modal analysis was performed using a jointed rail to confirm the structural responses to wheel–rail contact impacts at the discontinuity of rail joints. The frequencies of the first ten modes of the jointed rail are shown in Table 5 and selected modal shapes are shown in Figure 8. These modes correspond to vertical translation, rotation, and bending vibration. The ninth mode exhibits a local vibration in the vicinity of the CWR. The ninth mode is similar to the deflection of the impacted jointed rail, and the frequency of the eighth mode (354.11cHz) is close to the frequency of the wheel–rail contact impact force obtained from field measurements. Therefore, the dynamic response of the jointed rail may be closely correlated.
The vertical rail displacement according to the wheel–rail contact was confirmed through explicit dynamics analysis. The results of the FEA indicated that the displacement occurred at the rail joint subjected to a passing train wheel using the circular wheel element with sectional properties of an actual wheel (wheel diameter of 860 mm) in order to consider the rolling contact of wheel and rail, as shown in Figure 9a,b is the detailed displacement occurring in the rail joint when the wheel and the rail contact. As shown in Table 6, the vertical rail displacements predicted by FEA were comparable to the field measurements. The difference between the measured and analytical results was approximately 4%; the analytical results that considered the measured dynamic wheel load and wheel model reflected the measured vertical rail displacement results well. 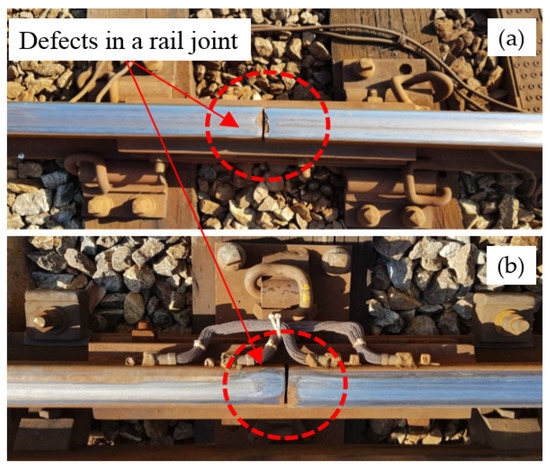 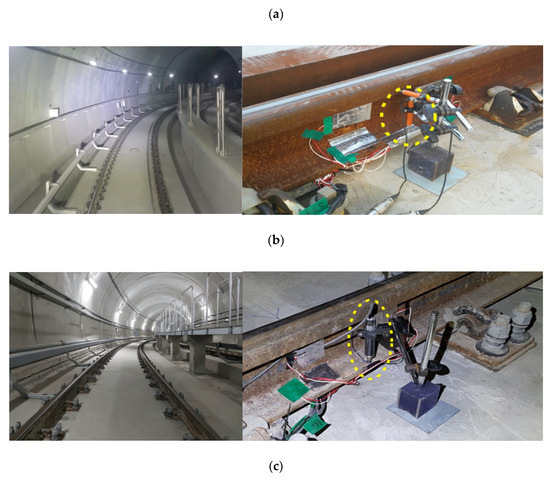 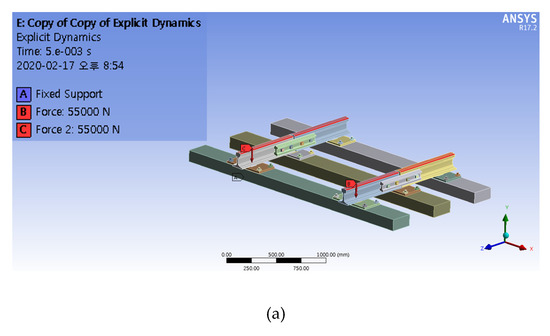 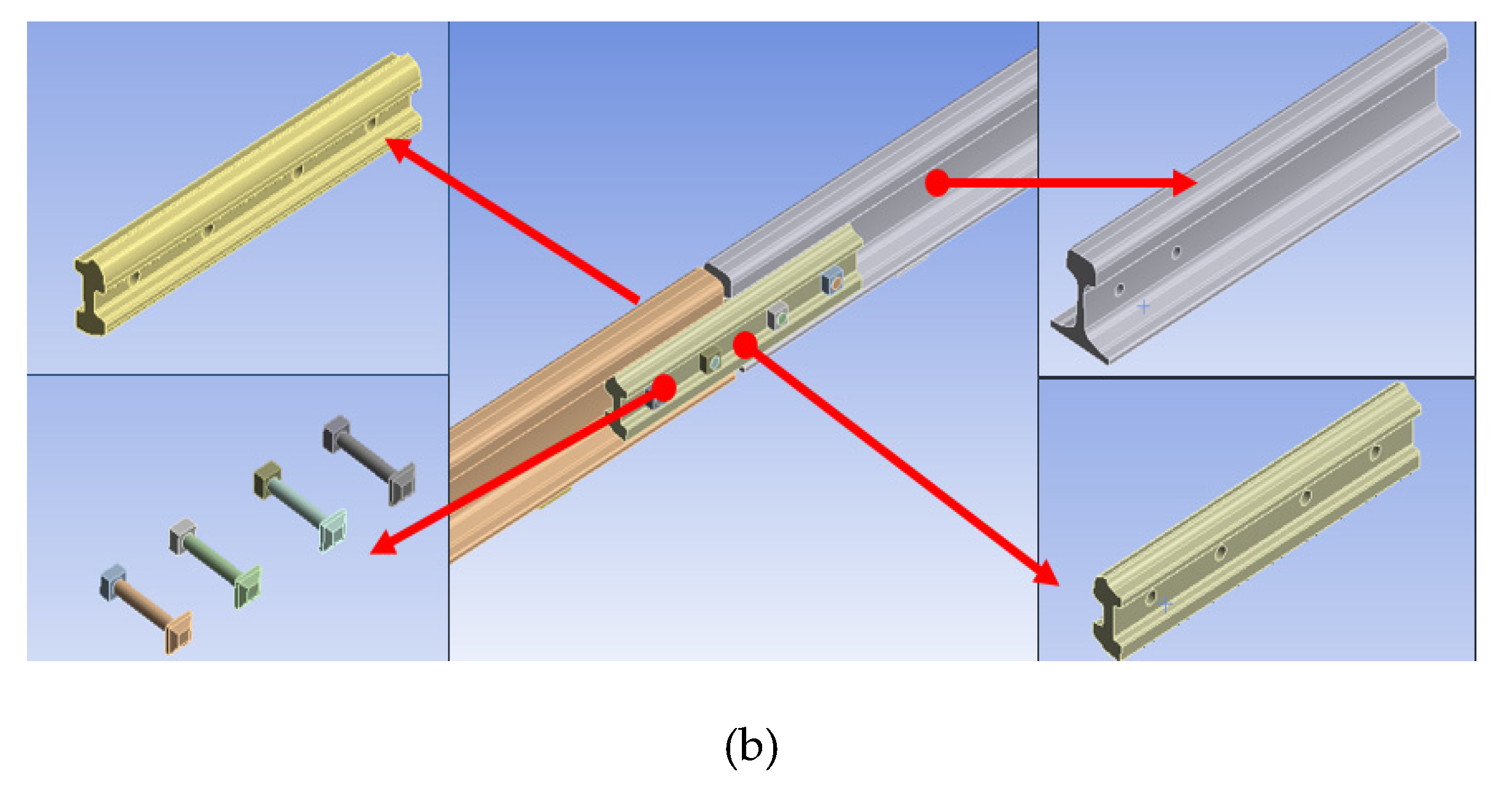 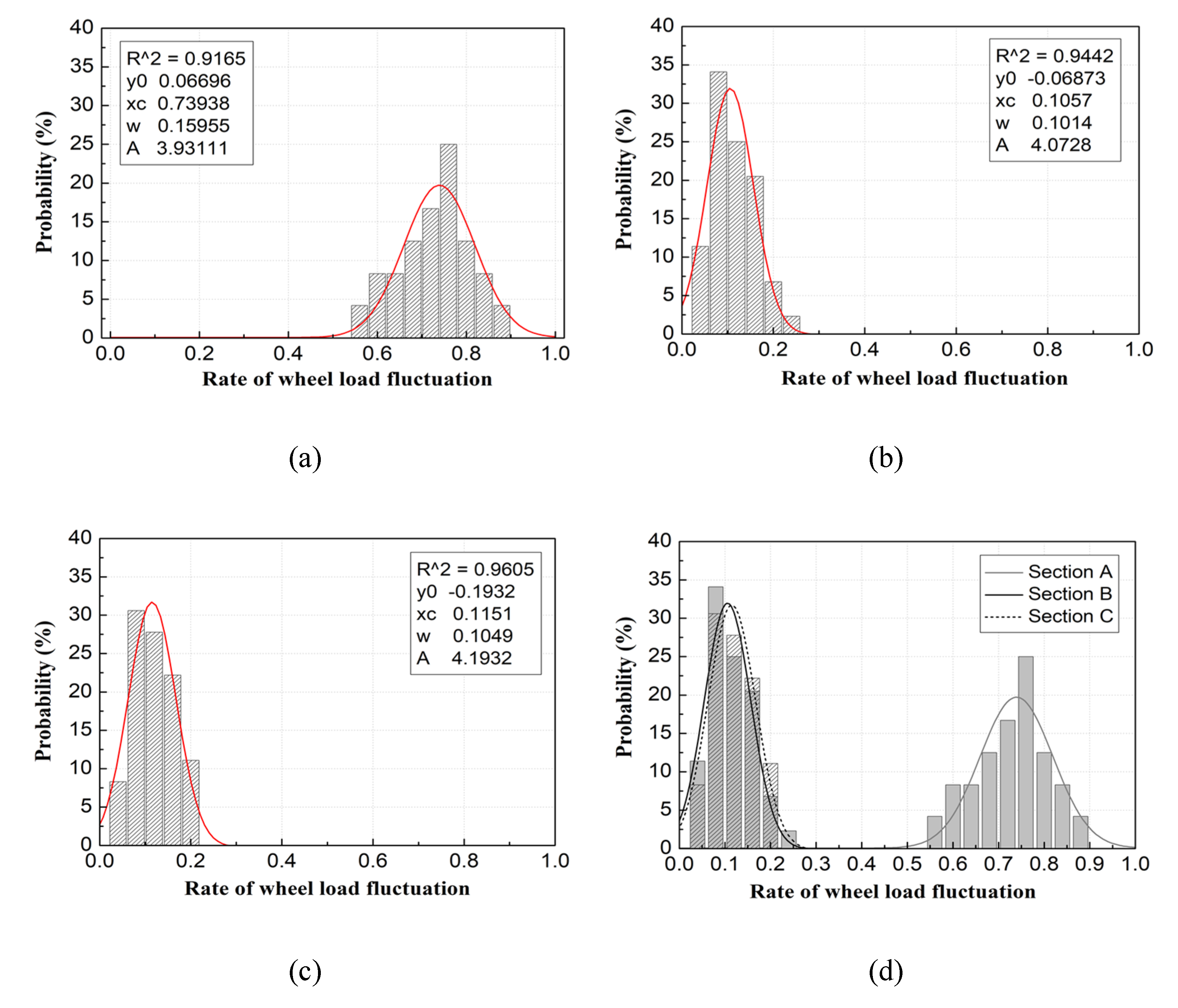 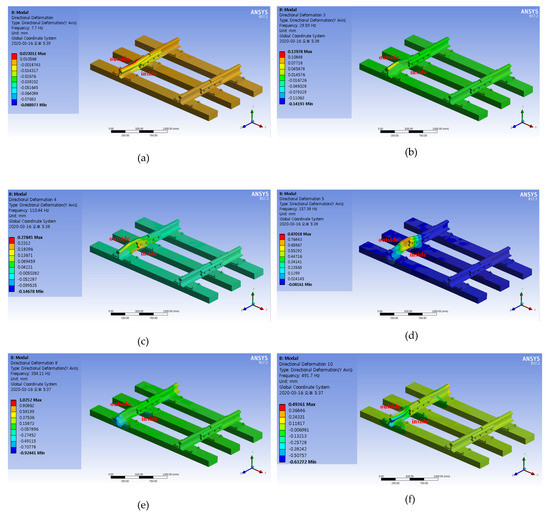