The biosynthesis of pharmaceutically significant secondary metabolites in filamentous fungi is a multistep process that depends on a wide range of various factors, one of which is the intracellular content of polyamines. We have previously shown that in Aspergillus terreus lovastatin high-yielding strain (HY) exogenous introduction of polyamines during fermentation can lead to an increase in the production of lovastatin by 20–45%. However, the molecular mechanisms of this phenomenon have not been elucidated. In this regard, we carried out an inhibitory analysis at the key stage of polyamine biosynthesis, the conversion of L-ornithine to putrescine by the enzyme ornithine decarboxylase (ODC). A. terreus HY strain showed upregulation of genes for biosynthesis of polyamines, 3–10-fold, and increased resistance compared to the original wild-type strain upon inhibition of ODC on synthetic medium with 5 mM α-difluoromethylornithine (DFMO), by 20–25%, and 5 mM 1-aminooxy-3-aminopropane (APA), by 40–45%. The data obtained indicate changes in the metabolism of polyamines in A. terreus HY strain. The observed phenomenon may have a universal character among fungal producers of secondary metabolites improved by classical methods, since previously the increased resistance to ODC inhibitors was also shown for Acremonium chrysogenum, a high-yielding producer of cephalosporin C. View Full-Text
Keywords: polyamines; Aspergillus terreus; ornithine decarboxylase; filamentous fungi; secondary metabolism polyamines; Aspergillus terreus; ornithine decarboxylase; filamentous fungi; secondary metabolism
►▼ Show Figures 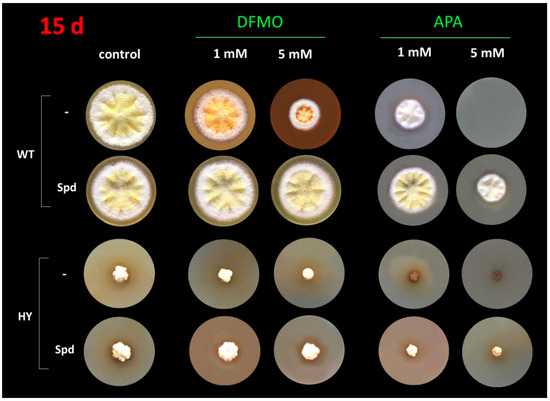