In connection with highly competitive elite alpine skiing, differences in finishing time are often very small [1]. Indeed, the overall finishing time is a major factor in determining a skier’s FIS (International Ski Federation) ranking and it is therefore hardly surprising that analysis of gate-to-gate times has focused on determining where a skier loses or gains time in as much detail as possible [2,3]. However, although easy for coaches and athletes to understand [4], times on short sections of a course, such as from gate-to-gate, are not good direct indicators of either instantaneous or turning performance [5]. In this context, variables related to the dissipation of mechanical energy reflect kinetic performance more closely [5,6,7] and kinematic parameters related to the trajectory of the skis are also more reliable [8,9].
Although numerous descriptions of alpine skiing technique have been published, relatively little is yet known about the biomechanical factors that influence competitive performance [6]. One such factor is the start strategy, including the technique utilized and number of start-pushes [10]. Furthermore, the slalom skiing technique chosen exerts an impact on both ground reaction forces (GRF) and performance [11,12,13]. Thus, in the case of slalom, the larger the “attack angle” (i.e., the angle between the orientation of the skis and direction of skiing) when entering a turn, the more energy is dissipated [14], whereas with giant slalom, the choice of trajectory and smoothness of skiing during a turn are also major influences on energy loss and performance [7,8,9]. Furthermore, use of a more “dynamic” body posture reduces energy loss due to aerodynamic drag [15], although this is not a major determinant of the performance of elite giant slalom skiers [16]. Air drag is more important in super-G skiing and even more so when skiing downhill [17]. When skiing straight, the movement of the center of mass forwards and backwards does not affect skiing time, whereas the edge angle does [18].
Although the body movements of athletes, and especially those of left and right turns by elite alpine skiers, are often asymmetric, little is presently known about how these asymmetries influence performance [19]. Bell [20] and Hoffman [21] and co-workers have shown that asymmetries affect jump height, while Beck and colleagues [22] found that asymmetries in stride while running result in more consumption of energy. Although ski coaches are often concerned with eliminating such asymmetries (i.e., correcting “mistakes” made when performing the “worse” turn), to our knowledge, with respect to alpine skiing, only preferential usage of one of the legs is known to affect turning and the potential impact of asymmetry on overall performance remains to be determined [23].
Accordingly, our aim here was to examine whether asymmetries in technique and in the ground reaction forces associated with left and right turns influence the competitive performance of elite slalom skiers. Our hypothesis was that asymmetries in the performance of elite slalom skiers are influenced by asymmetries in their technique and in ground reaction forces.

Starting twice from the left and twice from the right side, in randomized order, each skier performed four runs on a corridor-shaped slalom course with 20 gates placed symmetrically at 12-m intervals and with a displacement of 4 m (Figure 1). To ensure that this course was set precisely, the gates were positioned using the Leica Geodetic Global Satellite Navigation System (GNSS) 1200 with its built-in Stake-Out application (Leica Geosystems AG, Heerbrugg, Switzerland). The terrain selected had an average incline of 16°, with a maximal tilt to either side of <1°, and was groomed on each day of testing. In light of the hard, icy snow and temperatures between −2 and 0 °C, the coaches and experimental team smoothed the course prior to each and every run in an attempt to standardize conditions for side-skidding.
As described previously [24,25], three-dimensional whole-body kinematics were monitored utilizing the MVN Biomech V2018 inertial system (Xsens Technologies B.V., Enschede, The Netherlands) and Leica Zeno GG04 plus Real-Time Kinematics RTK GNSS (Leica Geosystems AG, Heerbrugg, Switzerland). The inertial system (calibrated twice prior to each run) was worn under the skier’s racing suit and the smart antenna (RTK GNSS) was integrated into the back protector and positioned at shoulder height to allow unobstructed satellite reception (Figure 2). Data collected by the inertial system were recorded on a memory card, while data from the GNSS RTK system were transmitted wirelessly to a handheld device (Conker NS6, Conker, Takeley, England). In connection with each measurement, the precise position of the smart antenna relative to the thoracic (T12) and cervical vertebrae (C7) was determined to allow reliable integration of these two sets of data.
In addition, the skier’s boots were equipped with pressure insoles (Loadsol, Novel GmbH, Munich, Germany) that assessed the total ground reaction force acting perpendicular to the sole of the ski boot, the individual forces acting on the entire inside and outside foot and the distribution of force between the fore and rear foot. To assist analysis, all runs were also filmed at 50 Hz with a high-resolution camera (GC-PX100, The Japan Victor Company Ltd., Yokohama, Japan). To allow synchronization of all measurements, each skier performed three active squats and three hits with one of his skis on the ground before each start.

To match the frequency of the inertial system, the RTK GNSS system’s captured trajectories at 20 Hz and the force measurements at 100 Hz were interpolated with cubic splines to 240 Hz. Following synchronization of the data collected by these three systems, these data were smoothed with the Rauch–Tung–Striebel algorithm [26], which utilizes a zero-lag two-way Kalman filter, in a manner similar to an earlier study [24]. The local coordinates provided by the inertial system were thereafter transformed into the global coordinates employed for RTK GNSS measurements by adding an extra node to the position of the RTK GNSS smart antenna. The data were subsequently transferred from Matlab R2016b (Mathworks, Natick, MA, USA) to the Visual 3D v6 software (C-Motion, Germantown, MD, USA), where the skier’s center of mass (CoM) and the trajectory of the skis were calculated. The CoM was calculated utilizing Demster’s regression equations [27], with inclusion of the mass of both the skiing and measuring equipment. The trajectory of the skis was defined as the arithmetic mean of the trajectories of the ankle joints [11].
The distance travelled and turn radius [7] were determined from the trajectory of the skis. From the trajectory of the CoM, the differential specific mechanical energy (i.e., the change in mechanical energy per unit change in altitude, normalized to the mass of the skier) [7] and mechanical energy for each specific section (normalized to the entrance speed) [5], which reflect instantaneous and sectional performance, respectively, were calculated. The definitions of both of these performance parameters mean that their values are negative when energy is dissipated. The flexion angles of the knee and hip joints on the left and right legs were provided directly by the inertial system. The angles of the inside and outside shanks, defined as the minimal tilt of the shank around the axis defined by the ski in relationship to the surface of the slope (Figure 3), were also calculated. Each turn was divided into initiation, steering and completion phases, as described previously [11] (Figure 1). To examine for temporal asymmetries, the left and right turning times were compared.
Asymmetry between the left (L) and right (R) sides was expressed as the index SI = 1 − (|L − R|)/(L + R), where L and D represent the average values of parameters during the steering phase of the turn, with the exceptions of turn length, time, speed and sectional energy loss, which were determined for the entire turn. As an indicator of overall (as opposed to average) asymmetries throughout the entire turn, the Jaccard index (JI) [28] was also calculated. To obtain this index, the mean value and standard deviation of each parameter at each % of the turn were calculated. Then, the two curves obtained by adding or subtracting the standard deviation to the mean value were taken to represent the upper and lower boundaries, respectively, of the polygon delineating the turn. Thereafter, the overall JI was calculated as (A∩B)/(A∪B), where A and B represent the polygons associated with the left and right turns, respectively. In practice, when JI is equal to 1, the areas defined by the mean ± standard deviation boundaries for the left and right turns overlap entirely, whereas when JI is equal to zero, there is no overlap at all.

Altogether, our multivariable linear regression models, each involving no more than two predictor (independent) variables, included a total of 26 predictor and 8 predicted (dependent) variables. Models were discarded if the p-value was >0.05, R2 < 0.7 or when the model’s predictor coefficients did not differ significantly from 0 (t-statistic, p < 0.05). In addition, to restrict our analysis to results that could be meaningful, only the 13 models for which at least one of the predictor coefficient values was >0.1 are shown in Table 3. Of these, all included two independent variables, with the exception of Model #10, which only included one.
The largest predictor coefficients were associated with the SI values for instantaneous (differential specific mechanical energy) and sectional performance (mechanical energy for each specific section/turn normalized to the entrance speed) (Models #10–13, Table 3). The independent variables in Models #10 and 12 were related only to skiing technique, while those in Models #11 and 13 were related to skiing technique in combination with GRF. The remainder of the models had smaller predictive coefficients of 0.46 (Model #5) or lower, among which the coefficients for SI and JI for turning radius were largest (Models #4 and 5). Interestingly, the largest predictive coefficients obtained with Models #6–9, designed to predict the SI for average velocity, all corresponded to the SI for overall GRF.

In conclusion, the application of descriptive statistical analysis to left and right turns by elite slalom skiers revealed that with respect to technique, ground reaction forces and performance, these turns were quite symmetrical, with the only significant difference being related to the mean GRF on the entire inside foot. Furthermore, all symmetry indices for skiing technique and performance were >92%, with the exception of those for instantaneous (70.6%) and sectional performance (84.2%), demonstrating the relevance of these latter two parameters in connection with the analysis of skiing asymmetry. The Jaccard index, which takes into account behavior within the turn cycle, was found to be more sensitive to asymmetries than the symmetry index, which is based solely on the mean values of the parameters. Although the movements of elite slalom skiers were found to be quite symmetrical, this is the first demonstration that asymmetry in their skiing technique and ground reaction forces influences asymmetry in their performance. These findings constitute experimental support for the efforts of coaches to achieve symmetrical skiing technique, not only in order to decrease the risk of injury [31], but also to optimize overall performance.

Conceptualization, M.S. and H.-C.H.; methodology, M.S. and J.O.; formal analysis, J.O. and M.S.; data collection and handling, M.S. and J.O.; writing—preparation of the first draft, M.S.; writing—review and editing, all authors; visualization, J.O. and M.S.; supervision, M.S.; project administration, M.S.; funding acquisition, H.-C.H. and N.Š. All authors have read and agreed to the published version of the manuscript.

The authors would like to sincerely thank all the skiers and their coaches for their helpful cooperation. Many thanks also to Alessandro Galloppini and Mads Kjær Madsen Mads for their help with the data collection and to Uwe Kersting for performing inertial motion capture. 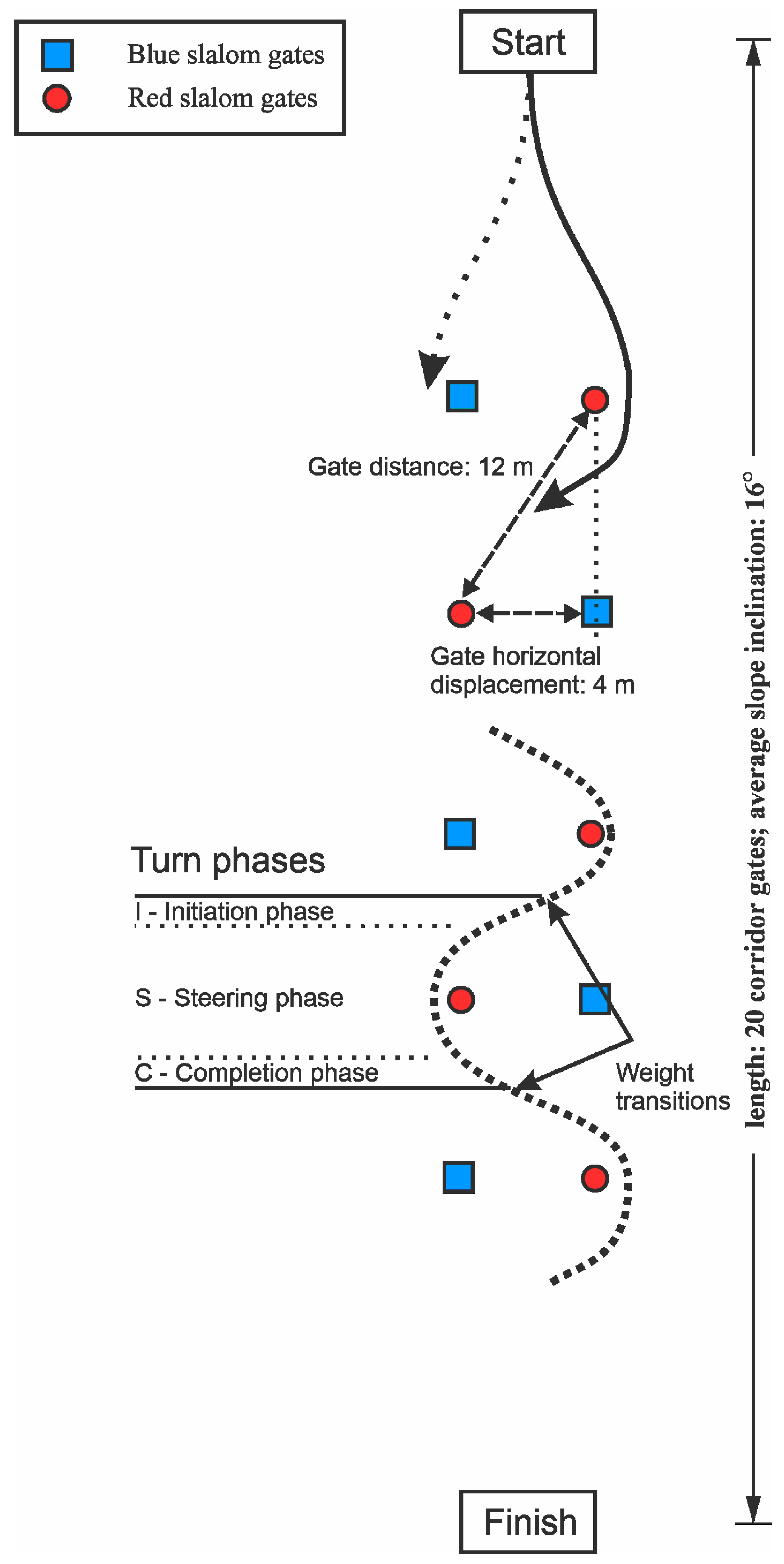 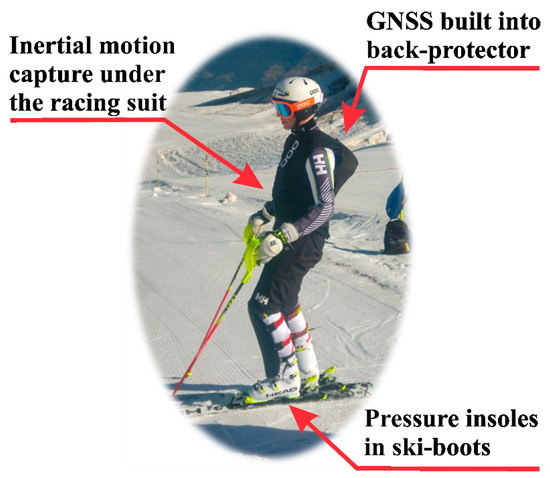 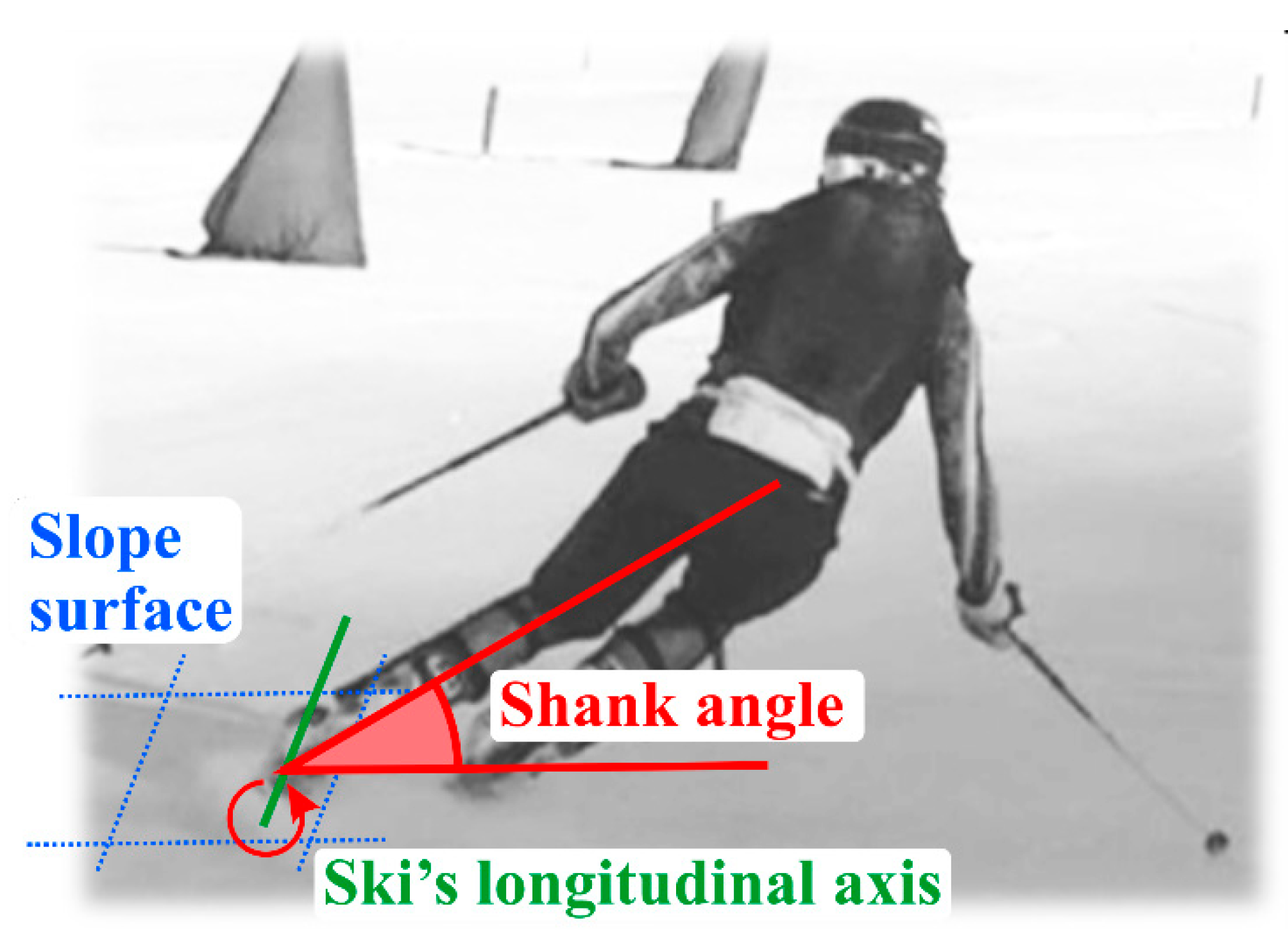 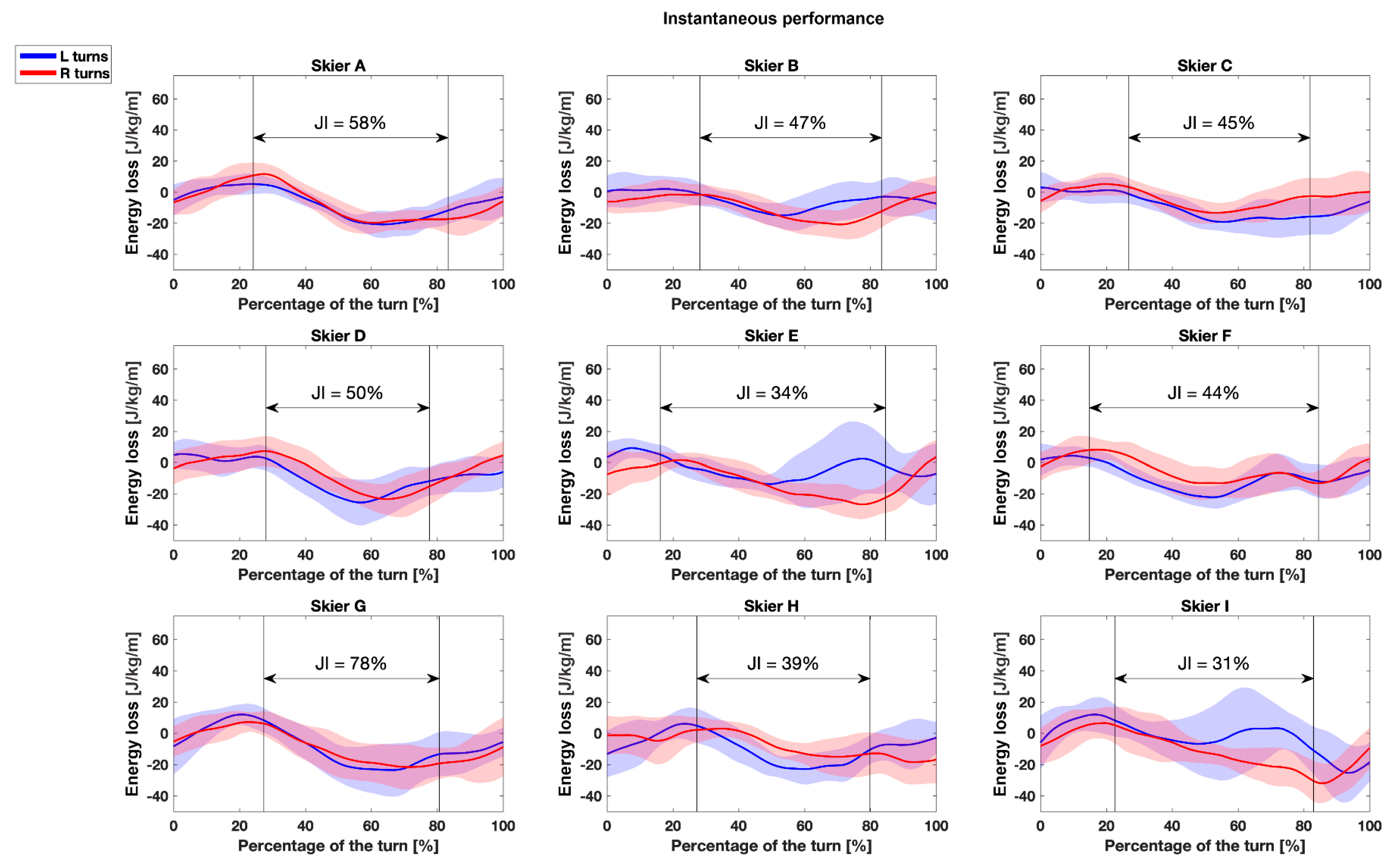