Short-time Fourier transform (STFT) is a time–frequency analysis technique for non-stationary signals. The STFT segments a time-domain input signal into several separated or overlapped frames by multiplying the signal with a window function and then applies the fast Fourier transform (FFT) to each frame. Because Fourier transforms are performed while moving the window, this technique can measure the frequency content changes of a signal over time [1,2,3]. Owing to these characteristics, the STFT is widely used in various fields that require frequency measurement over time, such as radar systems and voice-signal processing systems. In particular, to carry out these measurements in real-time, it is necessary to implement the STFT algorithm into a hardware processor [4,5,6,7,8,9,10].
An STFT processor consists of a windowing module and an FFT processor. The available types of FFT hardware architectures that can be considered for designing an STFT processor are the single butterfly architecture, the pipeline architecture, and the parallel architecture. Among them, the pipeline architecture offers a good tradeoff between hardware complexity and throughput rate; therefore, it is an attractive option for implementing the FFT processor in an STFT processor. Pipeline architectures are classified as single-path delay feedback (SDF) architecture and multi-path delay commutator (MDC) architecture. The SDF pipeline architecture is the more commonly used out of the two because it provides the lowest number of nontrivial multiplications, which are the most complex operations to perform in a single channel [11]. However, when using multiple data channels, the SDF FFT processor must be implemented in each channel. Thus, there is a problem in that hardware complexity increases linearly with the number of data channels. In the case of multi-channel FFT, Sansaloni et al. suggested that the MDC FFT processor could be implemented in a lower area than the SDF FFT processor [12].
The windowing module multiplies the non-stationary signal with the window function to add a time dimension and reduces the side lobes in the spectrum, thereby reducing the spectral leakage caused by noise. In addition, the type and length of the window function used in the windowing module are closely related to performance. Consequently, the type and length of the window function appropriate for each application are different [13].
The length of the window function in the STFT is related to the resolution of the signal. Long windows provide higher frequency resolution but lower time resolution. Analogously, short windows provide higher time resolution but lower frequency resolution. Because the required time and frequency resolutions vary between applications using STFT processors, the window length should ideally be variable to support various time and frequency resolutions [14,15,16]. STFT processors generally use several types of tapering windows, such as Hamming, Hanning, and Kaiser, to reduce the side lobes in the spectrum and mitigate spectral leakage due to noise. However, tapering windows are usually very small or zero at the beginning and end, resulting in data loss near the boundary. To solve this problem, we need to minimize the loss of data by overlapping window functions. The overlap ratio that minimizes data loss varies depending on the type of window function used. According to Heinzel et al., to minimize data loss when using a window function, it is typically used with a 0%, 25%, 50%, or 75% overlap [17]. Therefore, depending on the type of window used, the STFT processor should be capable of changing the overlap ratio to the one that minimizes data loss.
Various studies have been conducted to improve the performance of STFT processors. Zhang et al. implemented an STFT processor that uses several SDF FFT processors in parallel to support a high overlap ratio, but this increases complexity [18]. In addition, Srinivas et al. implemented the STFT processor as a single SDF FFT processor and reused the FFT calculation results to reduce hardware area and latency [19]. However, this STFT processor can only use a rectangular window and supports a 50% overlap only.
Therefore, in this paper, we propose an STFT processor that provides a 0/25/50/75% variable overlap ratio to minimize data loss depending on the type of window used and 16/64/256/1024-point variable window lengths to support various time–frequency resolutions. In particular, because the proposed STFT processor is based on a radix-4 MDC (R4MDC) architecture, it has lower complexity than architectures using several SDF FFT processors.
The remainder of this paper is organized as follows. Section 2 describes the STFT algorithm and general hardware architectures. Section 3 presents the hardware architecture of the proposed STFT processor. Section 4 presents the design and implementation results of the proposed STFT processor. Finally, Section 5 concludes the paper.

If the conventional R4MDC architecture is applied to the STFT processor, there is a problem in that the area required is higher owing to the first DMM that reconstructs the data before the first R4BM input [25]. In the case of 1024-point R4MDC FFT, 3072 delay elements are required for the subsequent R4BM (R4BM1). However, in the proposed STFT processor, the WM converts the input single data stream into four 75% overlapped data streams and reconstructs the data with an alignment pattern corresponding to that required by the first R4BM as shown in Figure 8. Therefore, in the proposed architecture, a DMM for performing data alignment for the first R4BM was not used. In this way, the required number of delay elements is only 768, thereby enabling an implementation with lower complexity. In addition, since the proposed WM should support variable lengths of 16/64/256/1024 points, we use multiplexers to determine the required data alignment pattern for 16/64/256/1024 points.

The DRM makes the four-channel data after the FFT operation match the predefined overlap ratio, as shown in Figure 6, and then outputs it. In this paper, the DRM is implemented using the architecture proposed in [26], and Figure 9 shows the hardware architecture of the proposed DRM. The pre-commutator reconstructs four-channel input data for the dual-port RAM (DPRAM). Because we need to support 16/64/256/1024-point variable lengths, we use multiplexers to enforce the necessary data alignment pattern for the 16/64/256/1024-point FFTs, respectively. The output of DPRAM is reconstructed and used as the input of the post-commutator, which uses multiplexers to reconstruct the data so that it matches the MDC data structure. The parallel-to-serial (P/S) converter selects data from the four-channel output of the post-commutator in the order that matches the predefined overlap ratio and outputs it as a single stream.

H.J. designed the algorithm, performed the simulation, and wrote the paper. Y.J. (Youngchul Jung) and S.L. performed the implementation and revised this manuscript. Y.J. (Yunho Jung) conceived and led the research, analyzed the implementation results, and wrote the paper. All authors have read and agreed to the published version of the manuscript.

This work was supported by Institute of Information & communications Technology Planning & Evaluation (IITP) grant funded by the Korea government (MSIT) (No. 2020-0-00201) and CAD tools were supported by IDEC. 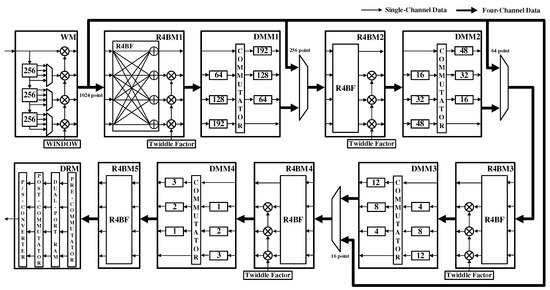