Promiscuous Targets for Antitubercular Drug Discovery: The Paradigm of DprE1 and MmpL3

The development and spread of Mycobacterium tuberculosis multi-drug resistant strains still represent a great global health threat, leading to an urgent need for novel anti-tuberculosis drugs. Indeed, in the last years, several efforts have been made in this direction, through a number of high-throughput screenings campaigns, which allowed for the identification of numerous hit compounds and novel targets. Interestingly, several independent screening assays identified the same proteins as the target of different compounds, and for this reason, they were named “promiscuous” targets. These proteins include DprE1, MmpL3, QcrB and Psk13, and are involved in the key pathway for M. tuberculosis survival, thus they should represent an Achilles’ heel which could be exploited for the development of novel effective drugs. Indeed, among the last molecules which entered clinical trials, four inhibit a promiscuous target. Within this review, the two most promising promiscuous targets, the oxidoreductase DprE1 involved in arabinogalactan synthesis and the mycolic acid transporter MmpL3 are discussed, along with the latest advancements in the development of novel inhibitors with anti-tubercular activity. View Full-Text
Keywords: mycobacteria; tuberculosis; multi-drug resistance; drug discovery; promiscuous targets mycobacteria; tuberculosis; multi-drug resistance; drug discovery; promiscuous targets
►▼ Show Figures 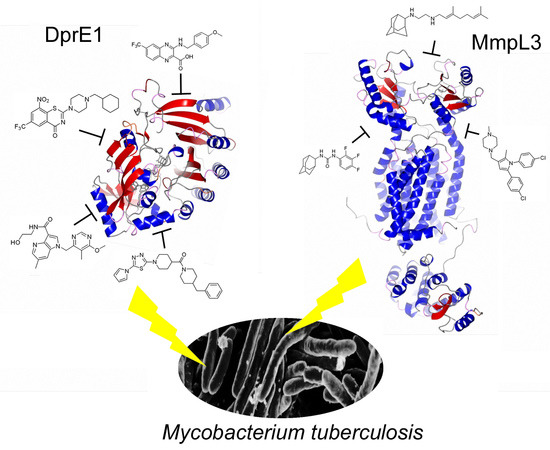