:
In the present research work, a newly developed technique which is known as variational homotopy perturbation transform method is implemented to solve fractional-order acoustic wave equations. The basic idea behind the present research work is to extend the variational homotopy perturbation method to variational homotopy perturbation transform method. The proposed scheme has confirmed, that it is an accurate and straightforward technique to solve fractional-order partial differential equations. The validity of the method is verified with the help of some illustrative examples. The obtained solutions have shown close contact with the exact solutions. Furthermore, the highest degree of accuracy has been achieved by the suggested method. In fact, the present method can be considered as one of the best analytical techniques compared to other analytical techniques to solve non-linear fractional partial differential equations.
Keywords:
homotopy perturbation method; variational iteration method; Laplace transform method; acoustic wave equations

Recently, fractional calculus and fractional differential equations (FDEs) have attracted the attention of scientists, mathematicians and engineers. A number of important implementations have been evaluated in various fields of sciences and engineering, such as material engineering, viscoelastic, electrochemistry, electromagnetic and dynamics physics which are described by fractional partial differential equations (FPDEs) [1]. Analytical approaches to solve FDEs are of great interest. There is no technique which provides an exact solution to the FDEs. Approximate approaches must be obtained by using techniques of series solution or linearization [2], followed by the application of proper numerical discretization [3,4,5] and system solvers [6,7,8]. Non-linear phenomena appear in a number of fields of engineering and sciences, such as solid state physics, chemical kinetics, non-linear spectroscopy, fluid physics, computational biology, quantum mechanics and thermodynamics etc. The concept of non-linearity is designed by various higher-order nonlinear partial differential equations (PDEs). For all of the physical systems, fundamental phenomena are covered by their nonlinear concepts [9,10]. In this paper, Laplace Variational Homotopy Perturbation Method (LVHPM) is implemented to solve the following linear and non-linear fractional-order regularized long wave equations. with initial condition with initial condition with initial condition and with initial condition
Equation (1) is known as the fractional-order non-linear regularized long wave equation (RLWE); Equation (2) is known as the fractional-order non-linear general regularized long wave equation (GRLWE) and Equations (3) and (4) are known as fractional-order linear regularized long wave equations (RLWEs) [11].
The Benjamin Bona Mahony equation (BBME) also identified the regularized long wave (RLW) equation. This equation is the updated version of Korteweg–de Vries equation (KdV) for the modeling of tiny amplitude lengthy surface gravitational waves spreading unidirectionally in two dimensions. RLW equations have several implementations in certain areas of science, such as ion-acoustic waves in plasma, longitudinal dispersive waves in elastic rods, magneto-hydrodynamic waves in plasma, rotating tube flow and stress waves in compressed gas bubble mixes, etc. The RLW equations are described as useful models in applied physics and engineering for many significant physical structures. They also design many liquid flow nature issues where diffusion is significant, either in viscous or shock situations. It can be used to model any dissipation-related non-linear wave diffusion problem. Chemical reaction, heat conduction, mass diffusion, viscosity, thermal radiation or other sources may result from this dissipation, depending on problem modeling [12].
The RLW problem is a family of non-linear growth models that provides excellent designs for predicting natural phenomena. The algorithm was initially introduced to define the undular bore behavior [13]. It was also obtained from the research of acoustic plasma waves of water and ion. An analytical solution for the RLW equation was identified under restricted initial and boundary conditions in [14]. The fractional RLW equations also define numerous significant ocean science and engineering phenomena such as long-wave and small frequency shallow water waves. The non-linear waves modeled on the fractional equations of RLW are of significant interest for several scientists in ocean shallow waves of liquid. The mathematically modeled non-linear waves in the ocean were the fractional RLW equations. Indeed, huge surface waves identified as the tsunami are described as fractional RLW equations. The huge internal waves in the interior of the ocean, resulting from the difference in temperature, that may destruct marine ships could be defined as fractional RLW equations in the current, highly efficient method.
In recent decades, many researchers and scientists have used analytical methods to solve these types of problems such as homotopy perturbation Sumudu transform method (HPSTM) [11], Adomian decomposition method (ADM) [15,16], least-squares method [17], optimal homotopy perturbation method [18], variational iteration method (VIM) homotopy perturbation method (HPM) [19] and He’s homotopy perturbation method [20]. It is observed that these methods have certain deficiencies like calculation of Adomian polynomials, determination of Lagrange multiplier, divergent results and a huge volume of calculations. As a result, a modified analytical technique which is known as VHPTM was introduced to solve differential equations of fractional-order. VHPTM is the combination of three well-known techniques namely, homotopy perturbation method, Laplace transform and variational iteration method. The present method uses the Lagrange multiplier that can limit the consecutive implementation of integral operator and unmanageable computational cost. It is still maintaining higher degree of accuracy. VHPTM [21,22,23,24] has an excellent scheme and absorbs all the beneficial characteristics of VIM and HPM.
Finally, He’s polynomials have been used in the correction fractional formula to develop the homotopy perturbation method. It is observed that the proposed method is implemented without any use of transformation, discretization and it was found to be free from the generating round off error. Usually, the method of variable separable needs both initial and boundary points to operate, but the present method provides an analytical solution by using initial conditions only. There is a clear advantage of the suggested method that it works without any use of Adomian polynomials, as required by the Adomian decomposition method. Results of the analysis show that the suggested method produces the solution in a series of fast convergence that can result in a closed solution [25,26,27,28,29,30].

To demonstrate, the fundamental concept of the present method [21,22], we are considering with initial condition where is an inhomogeneous term, and are particular linear and non-linear differential operators and is the Caputo fractional derivative of .
By taking Laplace transform of Equation (6) on both sides, we get where .
We can build a functional correction according to the variation iteration method where is the Lagrange multiplier. Here we put [22].
Applying inverse Laplace of Equation (7)
The basic idea in the procedure of homotopy perturbation method is that the solution can be written as a series in powers of p: where the non-linear expression can be expressed as
is He’s polynomials,
The technique of fractional VHPTM of Equation (8) with He’s polynomials.
By comparing the coefficients of like power of p on both sides of Equation (12), we get the VHPTM solution of the given problem.
Theorem 2.
Let ξ and be two Banach spaces and be a contractive nonlinear operator, such that for all y [31]. Then, in view of Banach contraction theorem, T has a unique fixed point υ, such that : Let us write the generated series (12), by the Laplace decomposition method asand supposed that where then, we have
Proof.
In view of mathematical induction for , we have
Let the result be true for , then
We have
Hence, using , we have which implies that .
: Since and as a
Therefore; we have . □

We consider time fractional-order linear RLW equation initial condition is
By using Equation (12), the fractional PDE given in Equation (26) can be written as where is the Lagrange multiplier
Applying VHPTM using He’s polynomials,
Comparing the coefficients of p
The analytical expression is therefore obtained in the following way
If the series form is
The exact solution at
In Table 2, the analytical solutions of VHPTM and HPSTM are compared in terms of absolute error. The accuracy has been measured for both the methods. By comparison it has shown that the proposed method VHPTM has a higher degree of accuracy than HPSTM.
In Figure 5, the graphs of exact and approximate solutions of example 4.3 are plotted. The graphical representation has confirmed that exact and VHPTM solutions are coincident. The exact and approximate solutions are closed to each other and verify the validity of the proposed method. The solution of example 4.3 at different fractional-orders and are shown graphically in Figure 6. The obtained solutions support the convergence phenomena of the solution of fractional-order problems to the solution of integer-order problem for the example 4.3.

We consider time fractional-order linear RLW equation with initial condition
By using Equation (12), the fractional PDE given in Equation (33) can be written as where is the Lagrange multiplier
Applying VHPTM using He’s polynomials,
Comparing the coefficients of p
The analytical expression is therefore obtained in the following way
If the series form is
The exact solution at
In Figure 7, the exact and VHPTM solution for example 4.4 are plotted. It can be seen from the figure that exact and VHPTM solutions are in closed contact with each other. In Figure 8, the VHPTM solutions for the example 4.4 at different fractional-orders are calculated. The convergence of fractional-order solutions towards integer-order solution has proved the applicability of the proposed method.

Several numerical examples are considered checking the applicability and reliability of the proposed method. The graphical representations of the solutions of examples 1 to 4, have provided the information about the accuracy and reliability of the proposed method. All the results of examples 1–4, confirmed strong agreement of VHPTM solutions with the exact solutions of the problems. The graphs represented the solutions for each problems at different fractional-order and . Investigations show that solutions of fractional-order problem are convergent to the solution of integer-order problems. Moreover, the simple and straightforward implementation of the suggested method is also observed throughout the simulation. From the above properties of the present method, we expect that it can be modified for other fractional-order differential equations which arise in science and engineering.

In this article, the fractional view of acoustic wave equation is discussed by using a modified analytical technique. The solution graphs are plotted to provide clear pictures and analysis of the obtained results. The graphical representation has suggested the greatest rate of convergence as compared to other analytical methods. The fractional-order analysis of the acoustic wave equation is important to investigate the behaviour of the dynamics as compared to the classical one. Therefore, in the present application scenario, the proposed method has played a significant role to describe sophisticated solutions of fractional-order partial differential equations arising in different areas of sciences and engineering. Moreover, the present method uses the variational parameters which reduces the calculations’ complexity. Also, the He’s polynomials have been used to obtain the solutions in an accurate way as compared to Adomian polynomials. The rate of convergence of the suggested method is found to be higher than other existing methods. Hence, it is concluded that the present method can be extended to solve other fractional non-linear partial differential equations. 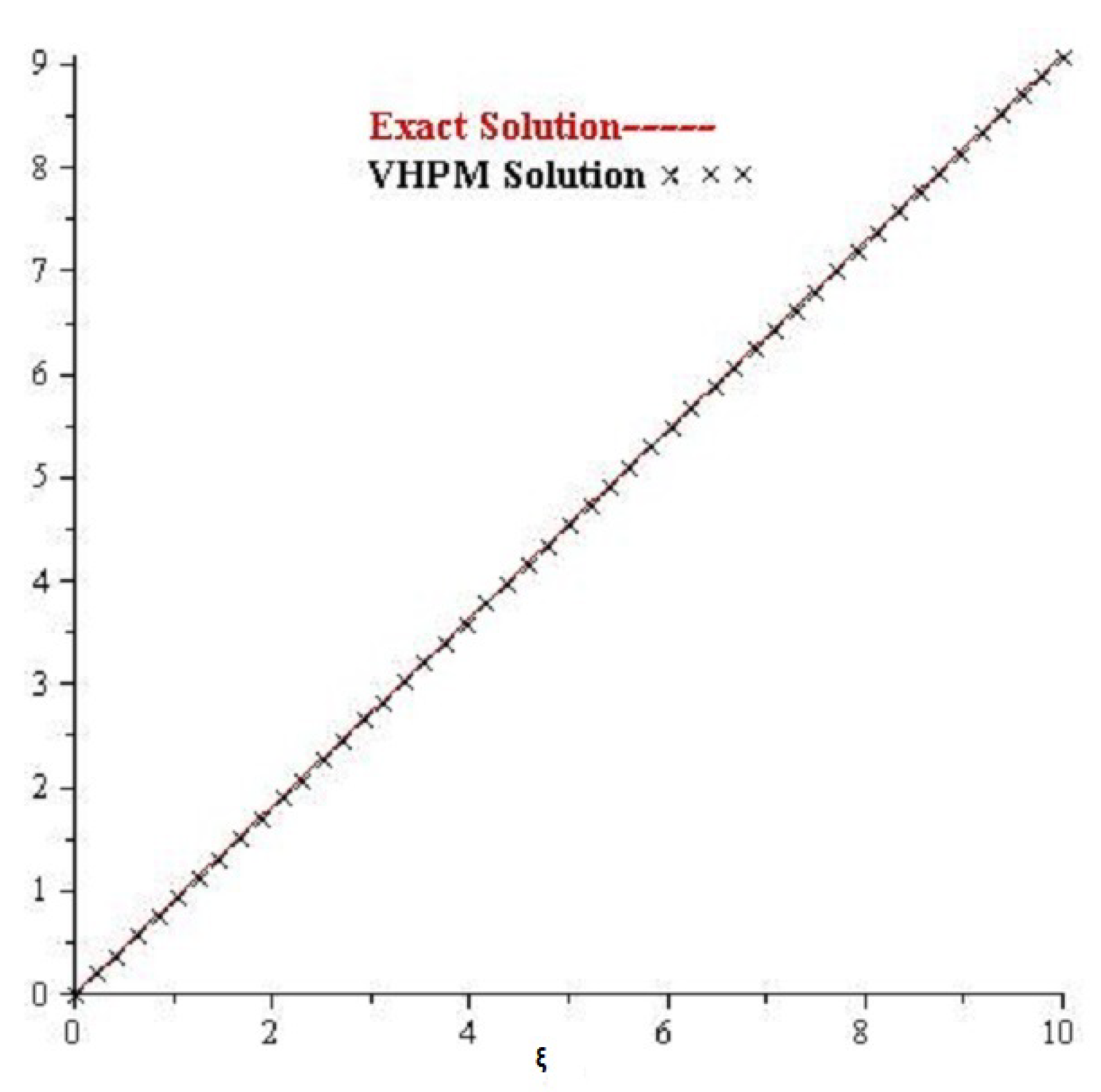 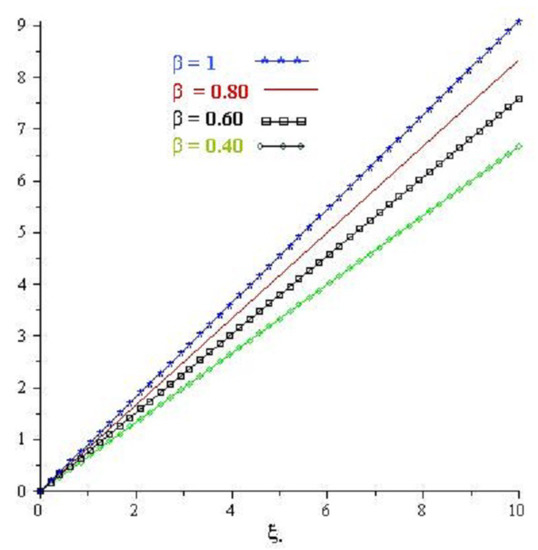 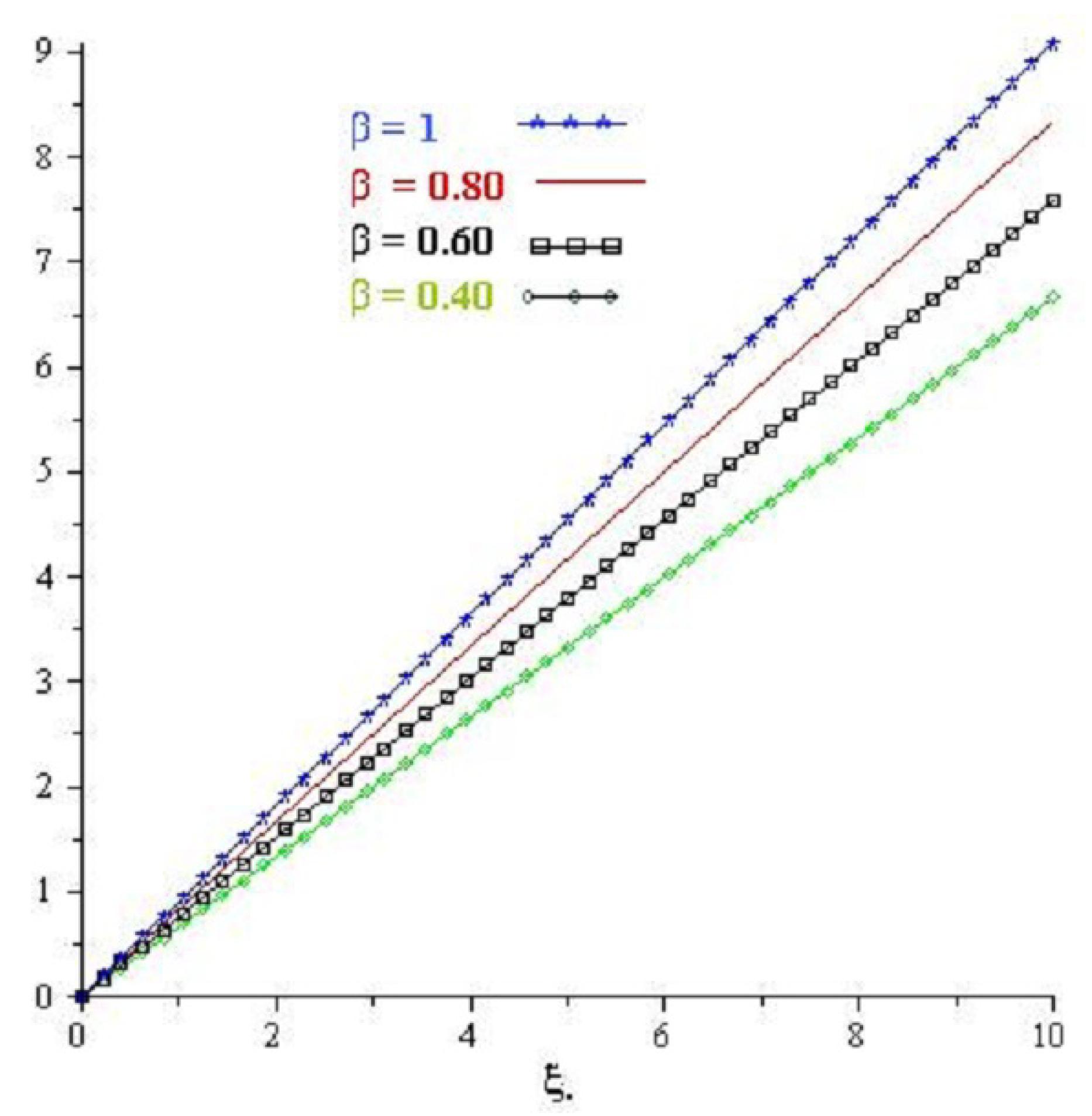 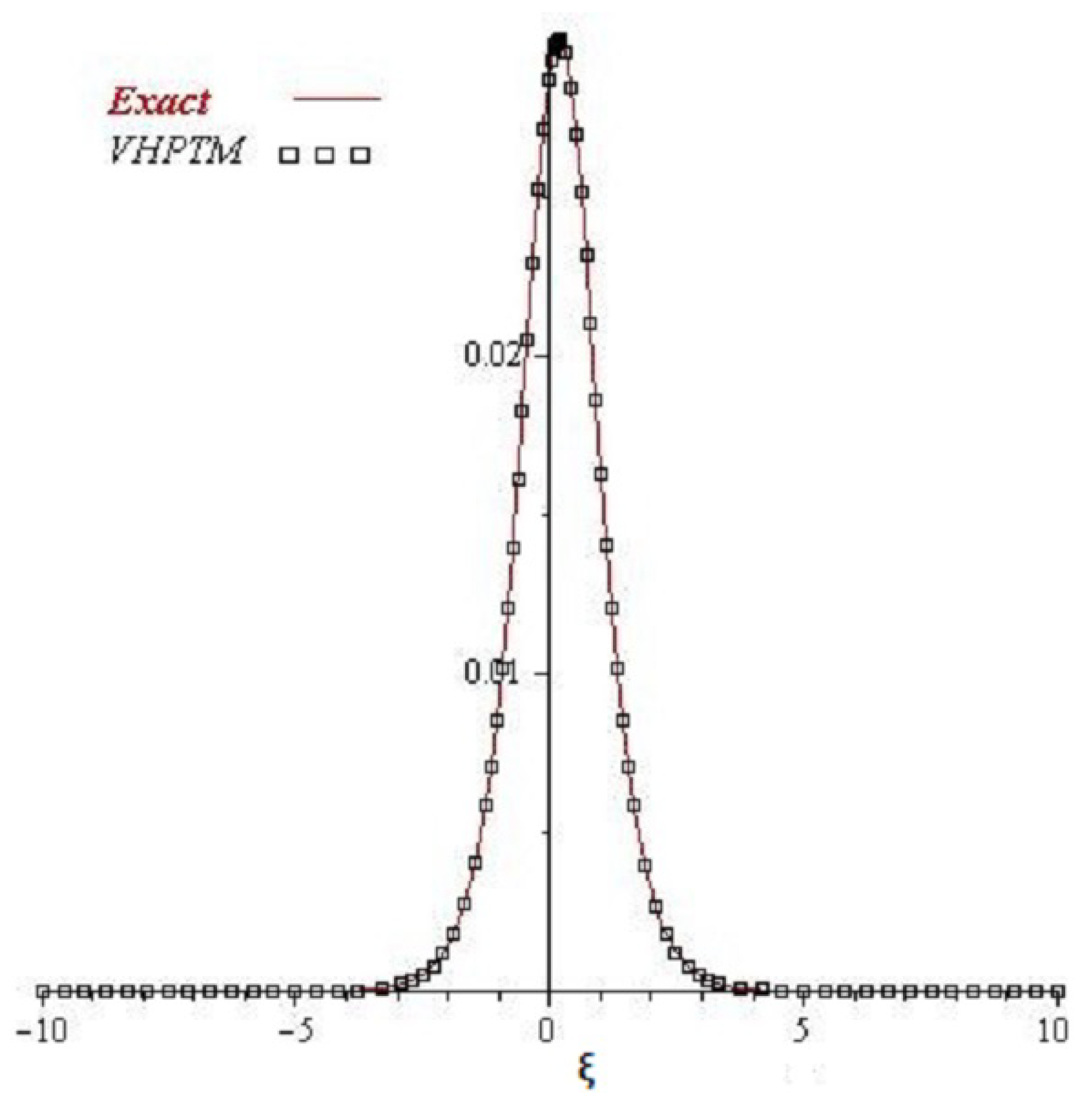 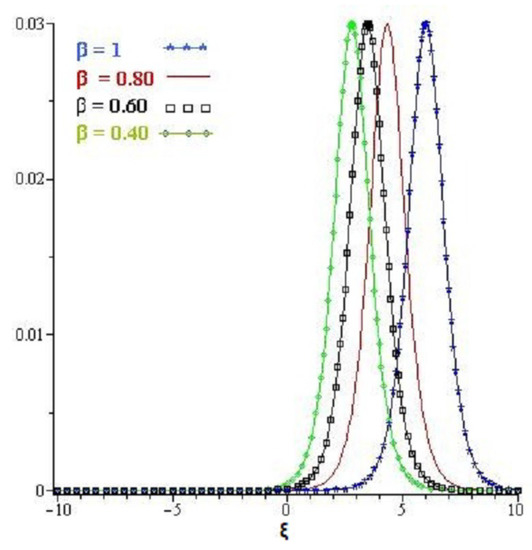 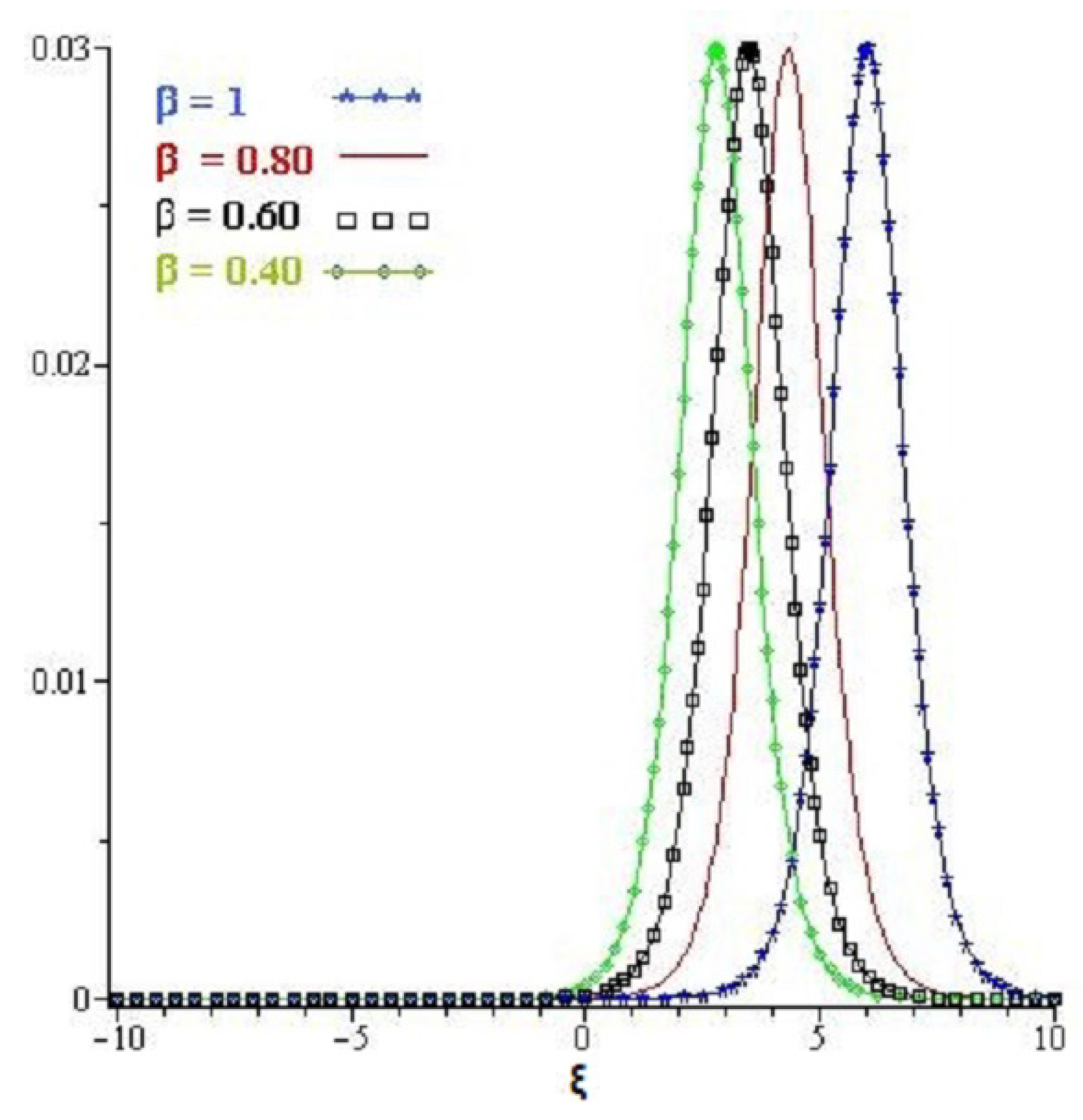 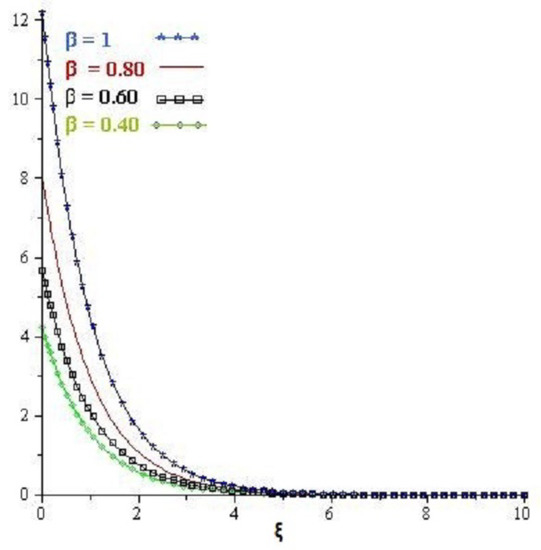 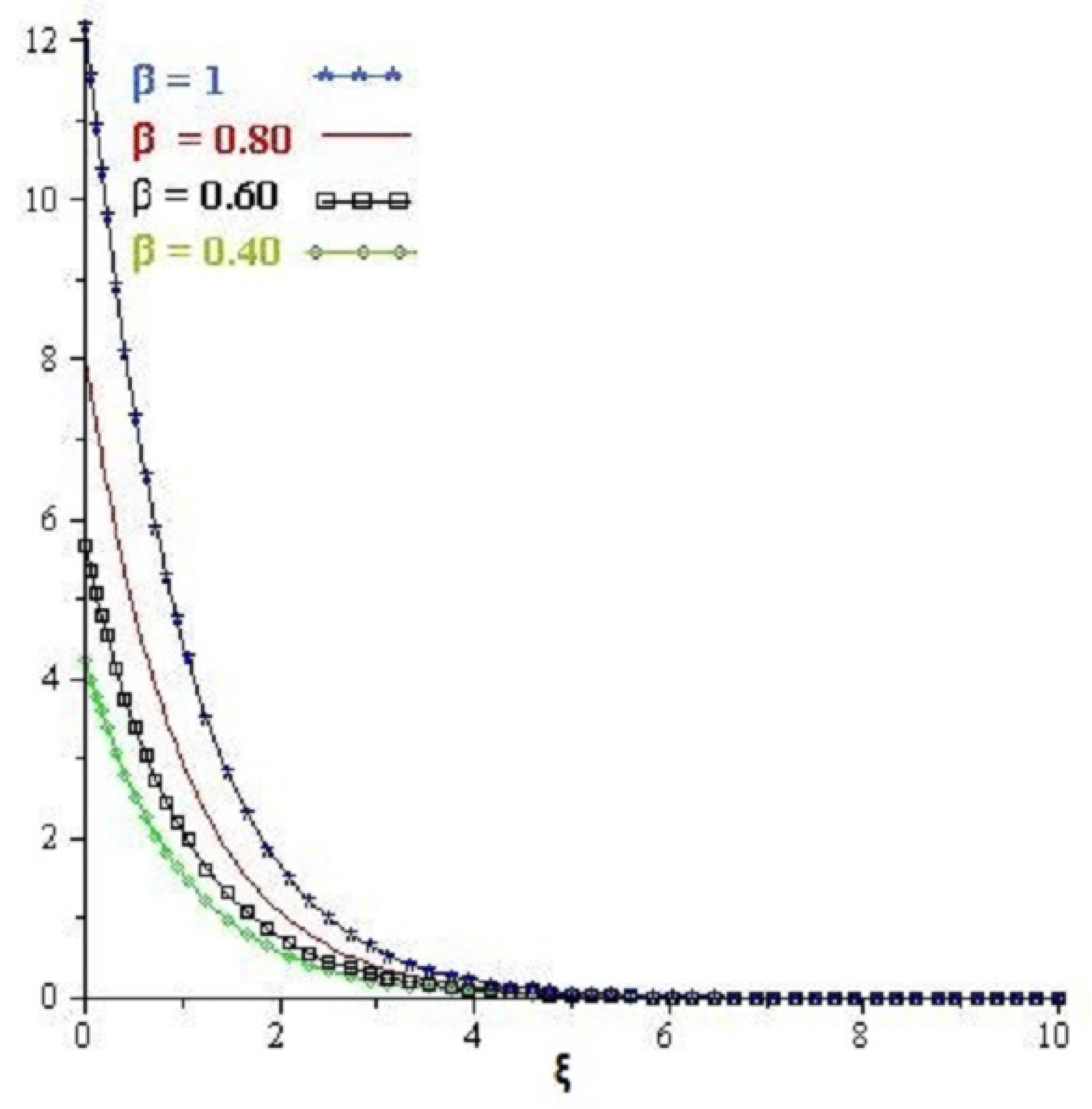 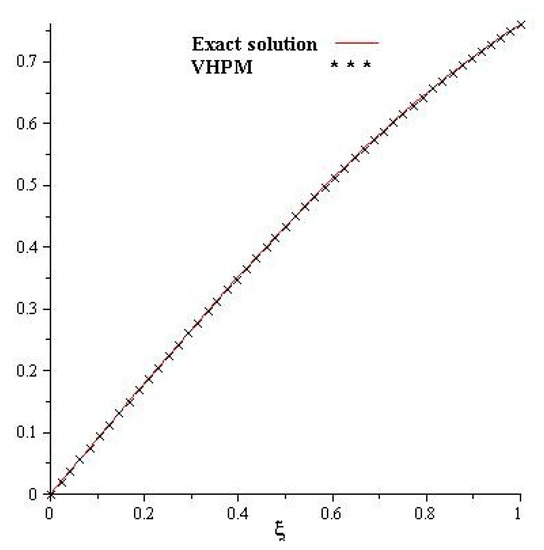 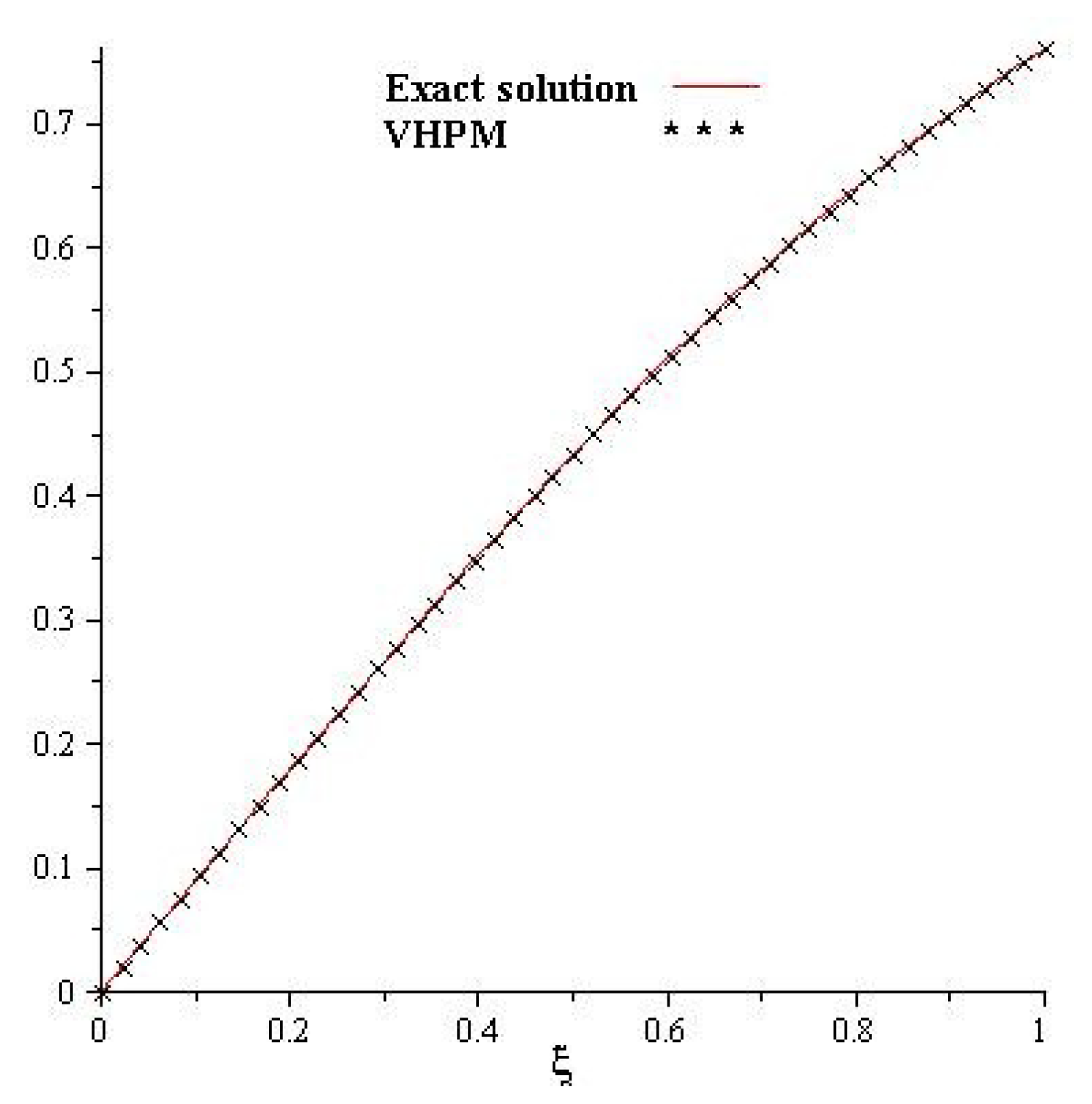